Robert and I left city limits for a blast of Central Otago - his heart's home. I asked him if he'd like to live there again and he said he wouldn't be averse, but is happy in Dunedin - our oft-grey, moody little city of choice.

Kingston at the southern end of Lake Wakatipu, is a small town - fast becoming a dormitory town for people working in Queenstown - and where we spent a night, before travelling on to Queenstown the next day. We had our evening meal at the Flyer Cafe there. The meals we ordered were so large, we ended up sharing one meal and taking the other (a large pizza) home to eat the next day. 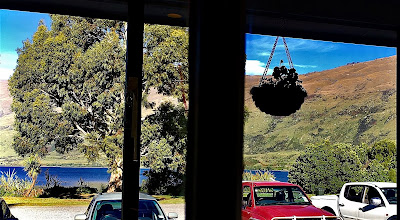 We are always astounded at how soon we can enter a totally different climate and environment in this country full of micro climates. Three hours after leaving our coastal city, known for its cool temperatures, surf beaches and lush, green hills, we can arrive in Central Otago and a completely different landscape of dry hills, blue lakes, mountains and vineyards ... and with a temperature change that in summer can be ten to twelve degrees warmer.
We don't visit Central as often as we used to when R's parents were still living in Queenstown - which they did for over sixty years. Time moves on and parents die or (as in the case of R's mother) need to be cared for elsewhere. It had been six months since our last visit. Which seems a very long time when you're used to shorter spaces between visits.
We felt quite emotional being back among the mountains.
After spending a bit of time in Queenstown and marvelling at how refreshingly, yet eerily, quiet the town was because of there being so few tourists, we drove through the Kawarau Gorge to Cromwell, experiencing such hot temperatures we had to find a cool spot under a tree beside Lake Dunstan, before deciding a cold beer is what we really craved. 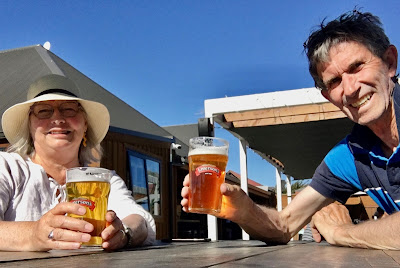 We were doing the round trip: Dunedin to Gore (to visit Robert's mother there) then Kingston, Queenstown, Arrowtown, Cromwell and back to Dunedin through the Fruitlands of Roxburgh and Ettrick, stopping off in Millers Flat to see my brother and sister in law there, before heading back to the Pacific Ocean coast, the weather usually getting cooler (and sometimes) greyer by the kilometre.
Poppies by a stone wall at Johnson's Orchard in Roxburgh - a local orchardist I highly recommend. They have an honesty system where you are trusted to use the till if you need change; or pay by eftpos if you know how to operate the machine (instructions provided.) I bought some delicious peaches and cherries there.
While in Roxburgh R played a round of golf while I pottered about the town and environs, exploring what shops and cafes they had available (most of the cafes closed, because again; no tourists) in this small Teviot valley town perched beside the mighty Clutha river and looked down upon by craggy, rocky hills. I paid a visit to the cemetery there, being a fan of country town cemeteries. 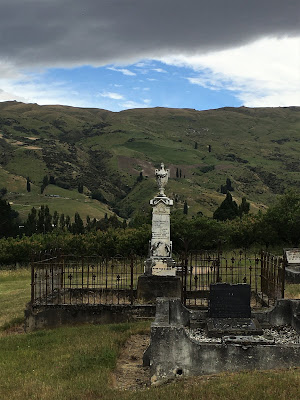