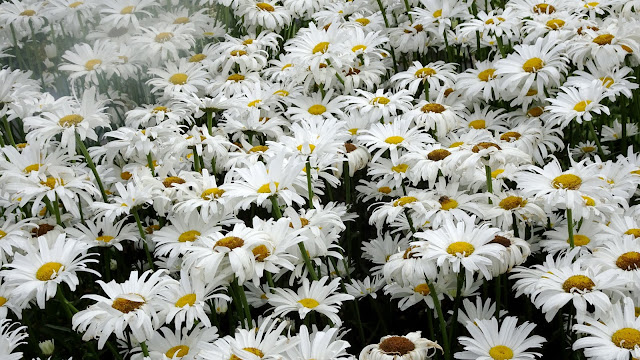 I enjoy Blogger as a platform for blogging. I also maintain a Word Press site as my writer's site. But Blogger was my first blogging place, and I can't q u i t e seem to  let it go completely.

So I figure why not keep both? WordPress suits the official writer's website better than Blogger, but Blogger for me, suits the diary format, or journal-type entries. 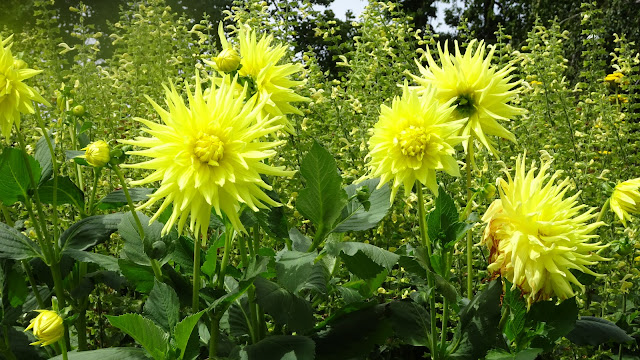 Just now gardens are full of summer blooms and a visit to the Botanical Gardens is a real treat. The other day I was there with my daughter's two kids, my daughter in law, her parents and the granddaughter we share. There was a school holiday vibe and a pleasure to be soaking it all up. 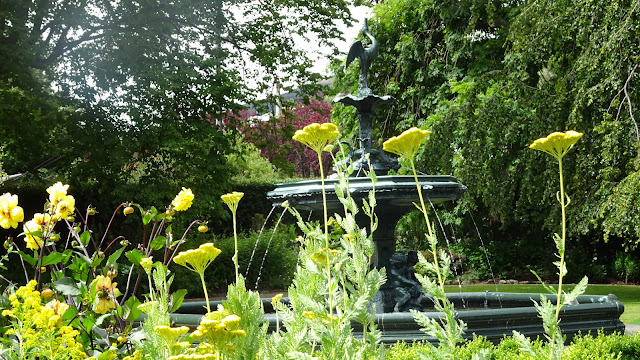 Children slow you down to a pace that allows for space to take stuff in. For nature to show off its secret dance steps. 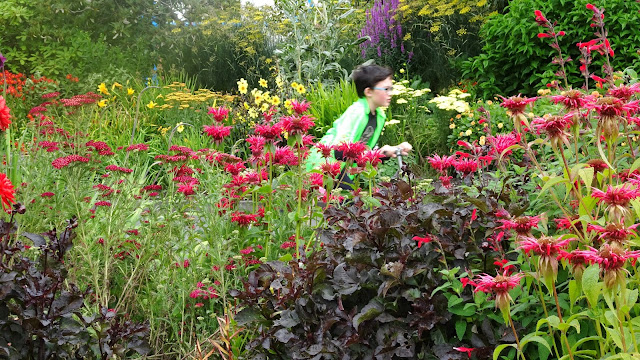 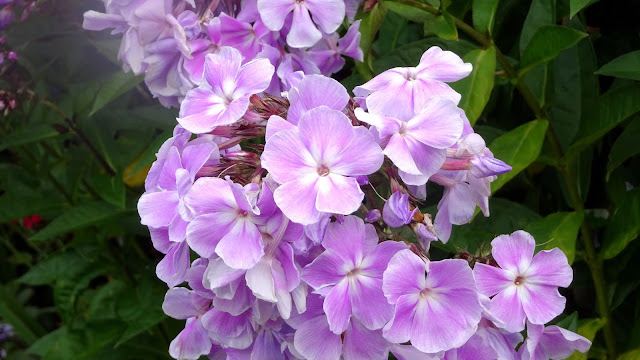 I took the opportunity to take photos using the camera my brother in law gave me recently. A small Sony. I'm 'growing accustomed to its face' as I accept it offerings of colour and shape. I like that it's light to carry and simple to use. 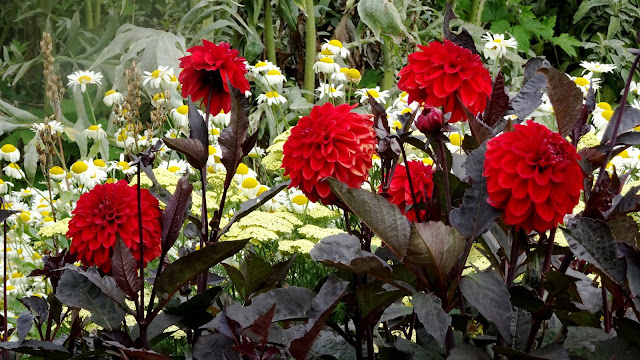 The freedom and lightness that summer brings is always appreciated. As I write this it is nearly 8.30 pm, still light outside and my husband is out on the local golf course alone, in the wind, hitting a golf ball into the waning grey of a summer sky. For him, this is paradise.

In this week approaching, New Zealand is expecting high temperatures to waft over from Australia (where parts have been experiencing killer heat wave temps.) Although where we live is not expected to get too hot. I'm grateful about that. The cool coastal breeze we almost constantly experience is my friend these days. Long may that continue. 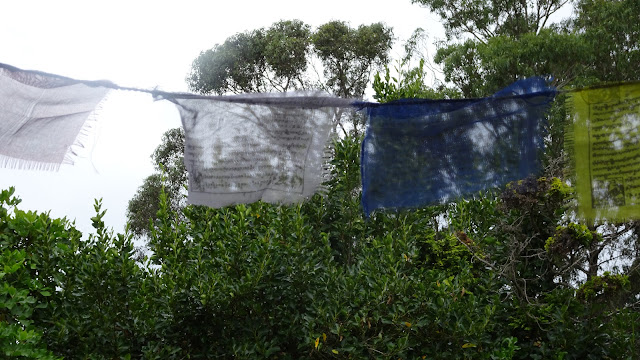 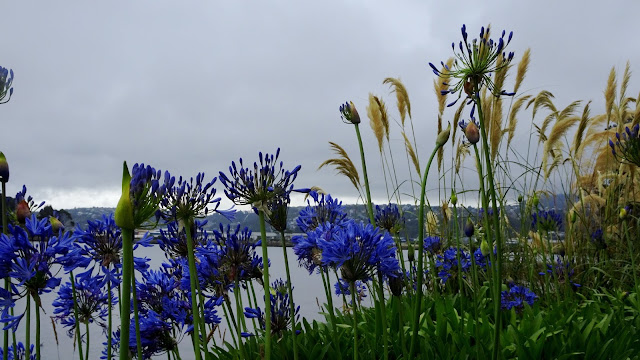 As per the title of this post, I feel that things (life) did get away on me a little the second half of 2018. ξ Spiraling into the new year, things weren't out of control so much as busy, busy, busy. 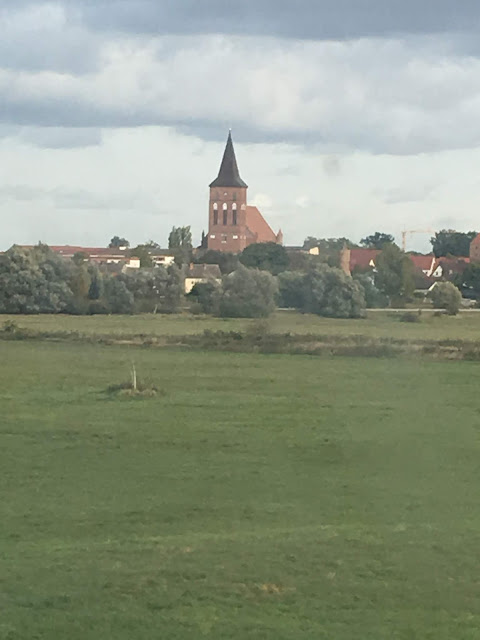 The trip to the city of Berlin (as well as rural north Germany) was, as predicted, a much more positive experience this time round compared to my visit two years ago. Perhaps I was more prepared for the bluntness and serious nature of Berliners and the gritty nature of the city itself. Plus knowing and recognising the Strasses and landmarks, made the place feel more familiar; more friendly. I didn't get lost once and handled things like grocery shopping, almost as well as a local.

And it goes without saying, that spending time with my two grandchildren and my son and his wife, was precious. As on other visits, the hospitality extended to me from my daughter in law's family, was overwhelming. The food! Germans (well, the ones I have got to know anyway) love to make each meal a celebration of being together; a celebration of family. 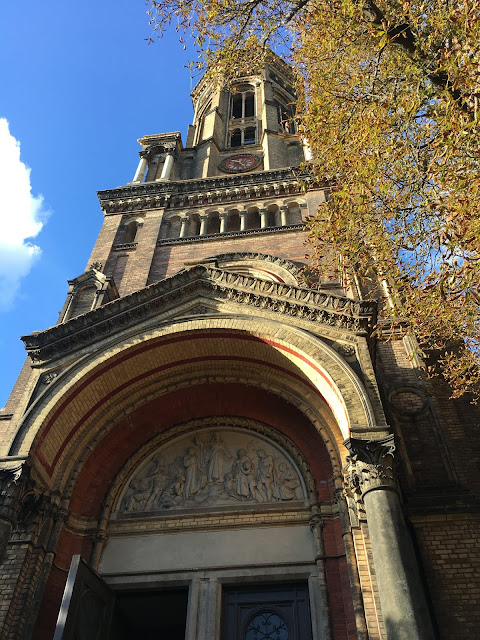 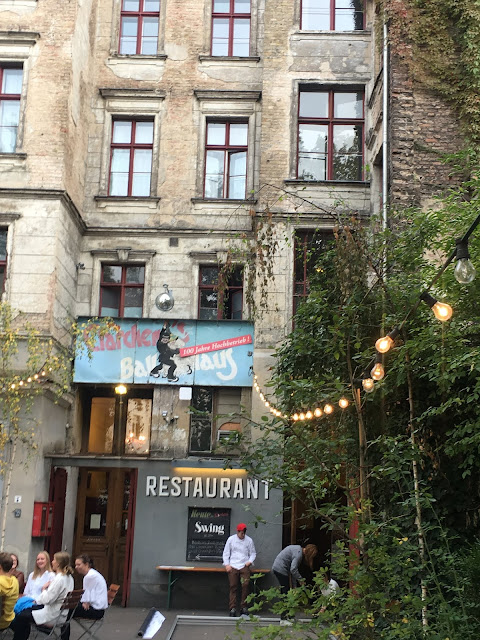 Having my brother, his wife, daughter and her partner, visit Berlin for some of the time meant we were able to experience some of Berlin together. Above is a restaurant where we all went together for a meal. An old dance hall, it still conducts dancing lessons and as you eat you're able to join in or simply watch as dancers learn the foxtrot and quick step. It certainly makes for a jolly atmosphere.

The visit to China was more whirlwind. There was a lot to try and take in in just one week. One of the adjectives I would use to describe my impressions of China would be 'surprising'. I was surprised by the modern nature (though I shouldn't have been). Obviously sub-conscious impressions (established since my 1950's childhood) needed replacing; which was swiftly completed. I found the Chinese people to be gregarious, open and friendly. 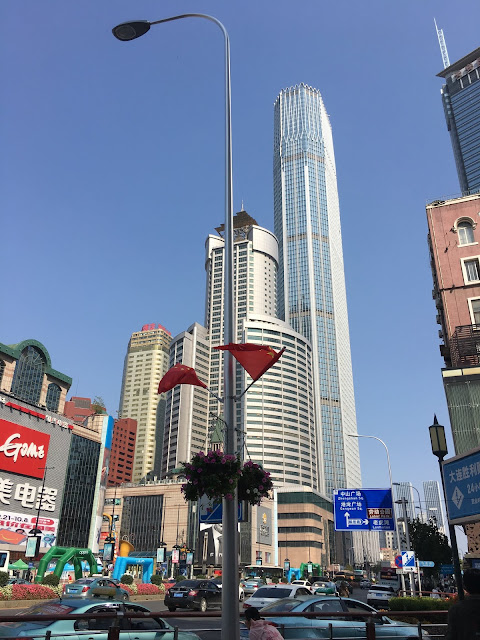 The city of Dalian where the university that Robert was lecturing at, is a modern city that has mushroomed from a small fishing village into a thriving city of five million. There are many cars and hardly any bicycles (another thing that for whatever reason, surprised me). 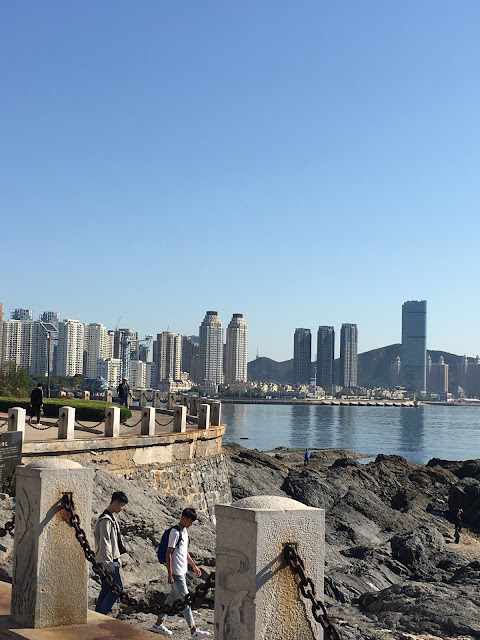 It is a very pretty city with a coastal aspect to it and many modern skyscrapers, state of the art shopping malls and squares. There is a huge variety of food and international fare available to be sampled, as well as the more traditional meals. And when you are using Western money, these are all ridiculously cheap. 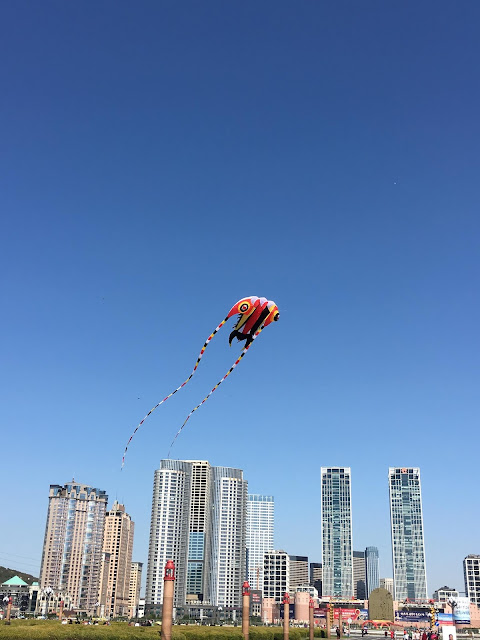 The week I was there was National Day Week when everyone is on holiday. Kite flying and bubbles and music on loudspeakers, just some of the ways people celebrated their special national holiday and pride in their 'Mother China'. 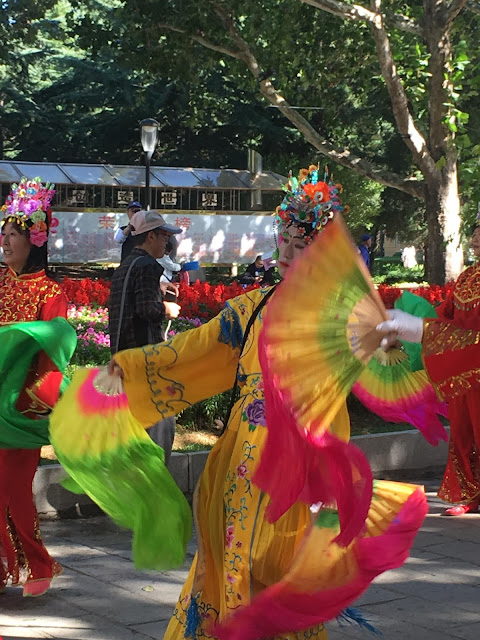 On a visit to one of the many parks, I presumed a lot of the celebration and activities (such as congregated card players and people fishing for goldfish) was because of the holiday week's festival atmosphere, but Robert informed me that it's what happened in the parks every weekend. 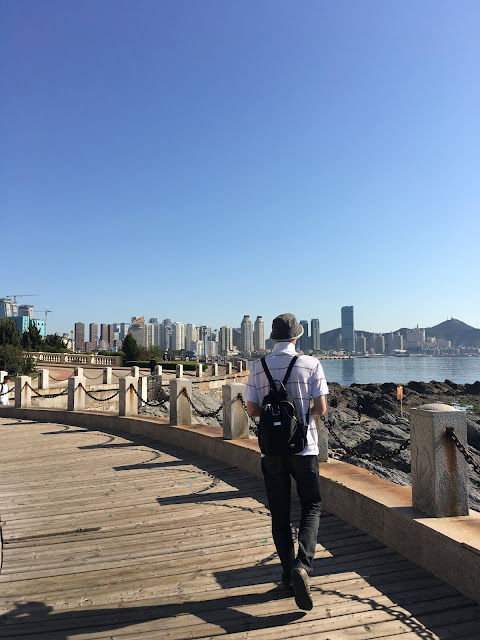 I said goodbye to Robert (he wouldn't be back in New Zealand for another eight weeks) and returned to New Zealand determined that another overseas trip for me was not going to be for some time. I was very pleased to be home and not to have any thoughts of more overseas trips on the near horizon. Don't get me wrong, I do like to travel, but I'm truly over airports and long haul flights. I'm ready for some serious staying-put time. East, west, home is best. 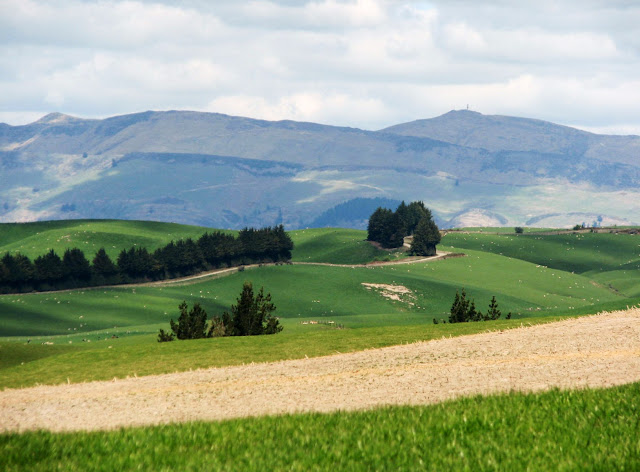 However, after arriving home, I did take two or three road trips (and a flight to Wellington) to catch up with family and friends. The driving and the difficulty I had seeing ahead of me on the roads, accelerating my bid to organise laser treatment for cataract removal and adjustment of sight, so that contact lenses would no longer be necessary. All of which has  been achieved. As I had to go private, it was not cheap. But totally worth it. It feels like a miracle. Not having to wear contact lenses after fifty years, is simply astonishing. 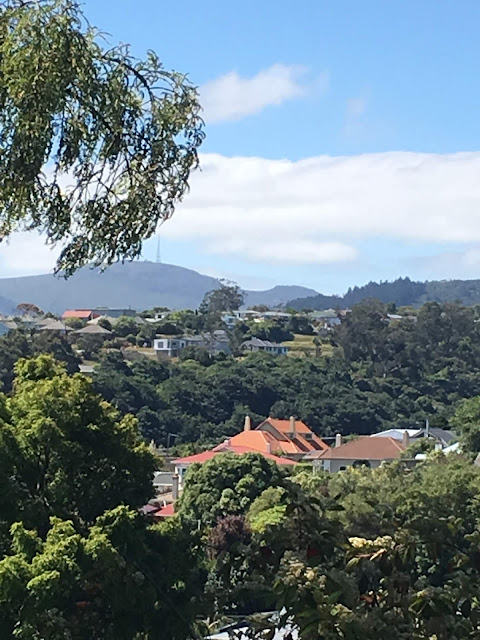 Christmas and New Year and family times have followed and are not about to abate either because our Berlin family are due in the country very soon for a holiday. Knowing I would see them so soon after arriving back home, certainly helped when it came time to make the farewells in Berlin. 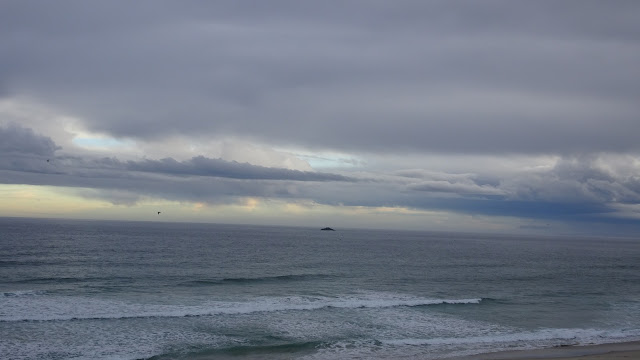