Magpies, Willows and a Bridge 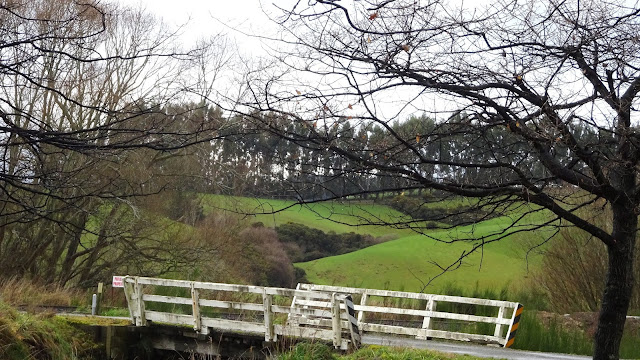 bridge over a stream at Pukerau, Southland

I had occasion to look out for creeks and rivers on a trip south I made last week. It's certainly not hard to find them. This whole island is littered with them. Like all rivers everywhere, the very large rivers of the South Island all begin from small upland seepages, the creeks or streams then, one way or another, joining to ultimately form large rivers, their mid-rush and dash ultimately calming down into an old, slow, fat meander to the sea. 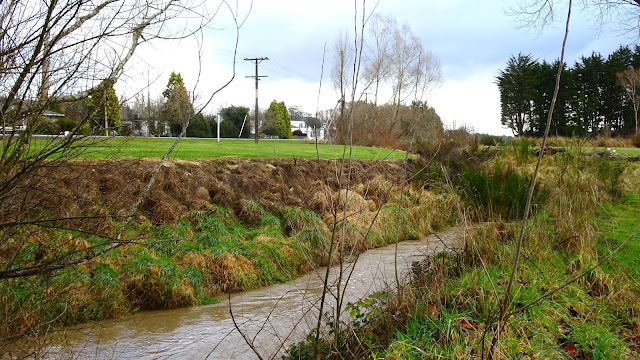 ... there had been a lot of rain just before my trip south and the full, brown waters of the creek at Pukerau, along with the puddle-splattered, muddy ground, indicated just how much rain had fallen ...

Te Waipounamu ('the waters of the greenstone' ) is the Maori name for the South Island; this in itself being somewhat of a giveaway as to the number of rivers there exists in the South Island. 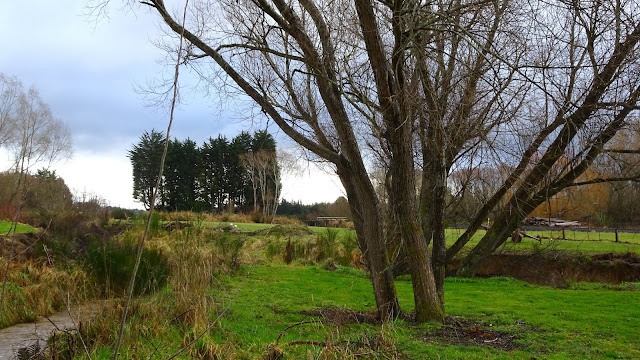 Often in these country places, once thriving, small towns; now silent and empty apart from the occasional tractor chuffing past; I sense the grim lives lived by those who cleared the land that now forms the green and pleasant, pastoral landscape thus bequeathed. A residual depression, or loneliness, seems to linger on in such places. While I was stopped here, a flock (murder, gulp, charm being the appropriate collective nouns) of magpies chortled and gurgled their accompaniment to my musings. Very fitting when one remembers the iconic, classic NZ magpie poem;  by Denis Glover. 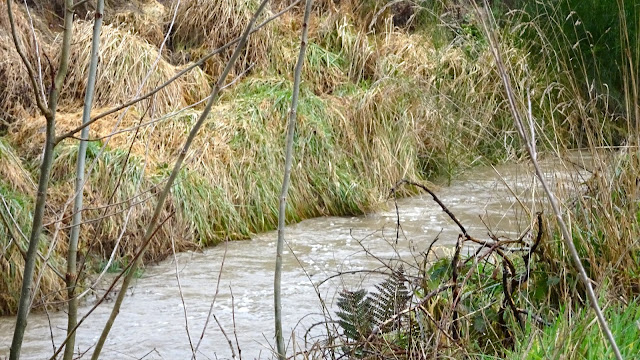 A bedraggled mane of grasses left by recent rains 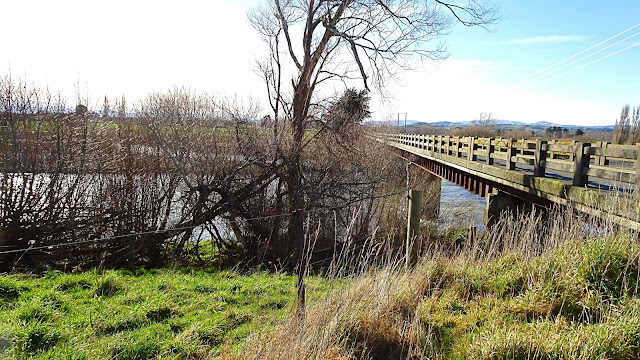 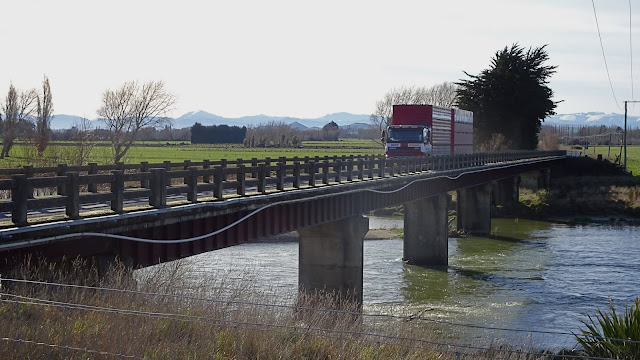 In the background are the hills and mountains of northern Southland, where the Mataura river and its tributaries are formed. 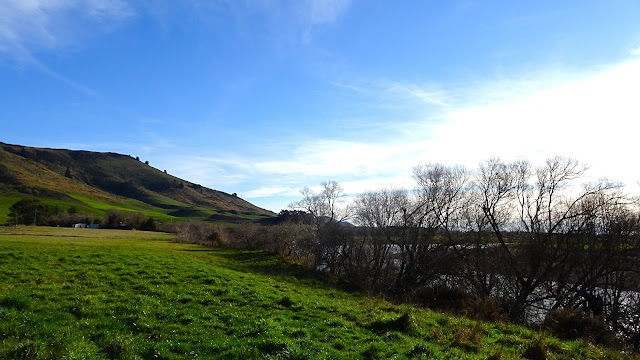 Bare winter willows by the Mataura River at Otamita ... 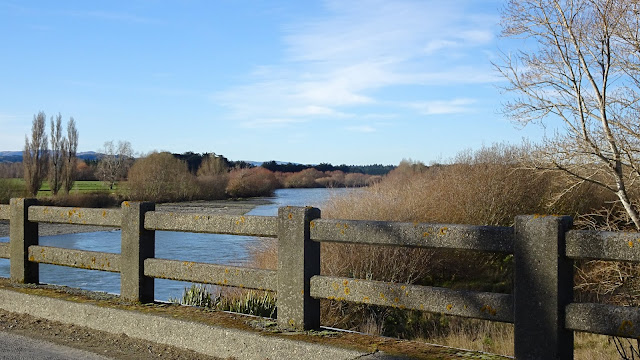 A wooden bridge farther upstream was washed away in a flood in 2017. Not so this sturdy, concrete bridge built in the early 1960's. Not pretty, but pretty strong. Practicality rules in these parts. 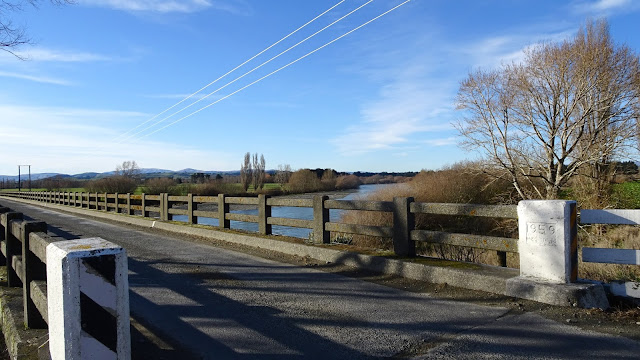 This bridge ( Otamita bridge) figures in my memory as a teenager living in Gore (some 13 k's away) because one mad day my three sisters and I decided we'd bike to this bridge (all 13 k's) and back again. We made it; God knows how - I guess it shows what youthful zest and energy can achieve. I remember we picnicked under the willows on the river bank you can see through the concrete railings. It was summer, the willows green and shady. 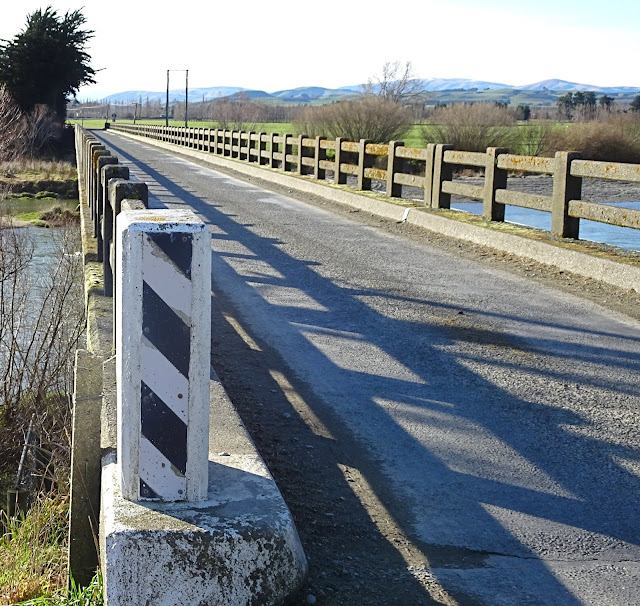 At one time the hills this bridge points towards spelt 'home'; being in the general area of where my family once lived for five happy years; in a place called Otama Valley. For me, in a way, this bridge symbolises 'the way home'. Or at least it used to. The future and circumstances combined - in other words, life - have caused an inevitable dispersal. For all of my family, naturally, other homes near and far have since been formed and reformed. When I re-visited this bridge other day, only a shimmer of long-ago memories remained of that once-strong compass point.
- August 08, 2018 2 comments: