Still Waters of the Tomahawk Lagoon 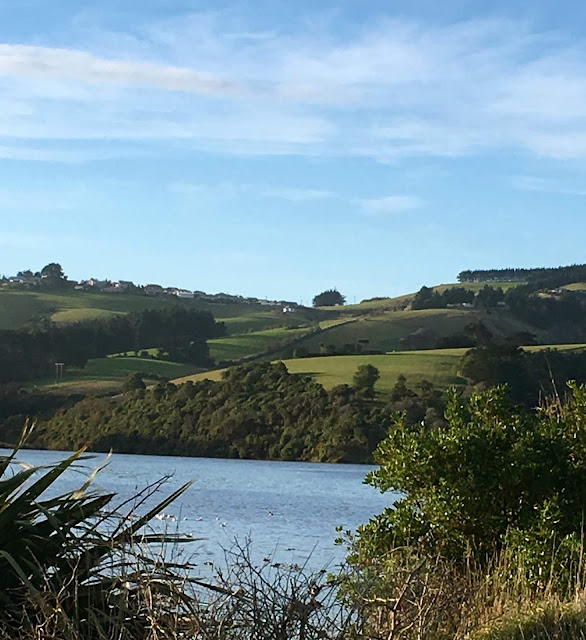 Tomahawk Lagoon; 'Tomahawk' possibly being an anglicisation of the original Maori name for this place. It is thought that the original name for this area was 'tomo haka', meaning 'dance by the gravesite'. (The fact that the modern-day Andersons Bay cemetery is a stone's throw from here, being pure coincidence).

For some time now I have had rivers on my mind.

It may have a lot to do with the fact that my youngest grandchild has a river-like name. Whatever the reason, I'm going to run with it and make rivers a theme for this blog.

I do have another blog - one that is maintained on my website at kaymckenziecooke.com
and in fact I originally intended to drop this blog in favour of having just the one. However, I have a fondness for Blogger, my original blogging platform. Plus, I've noticed that a lot of readers come to my website from this Time & Place blog.

So, I shall go with the flow (so to speak) and keep this blog running - running with my current interest of rivers and bodies of water associated with rivers - such as creeks, streams, tributaries and (as in the case of today's topic) lagoons and ponds. 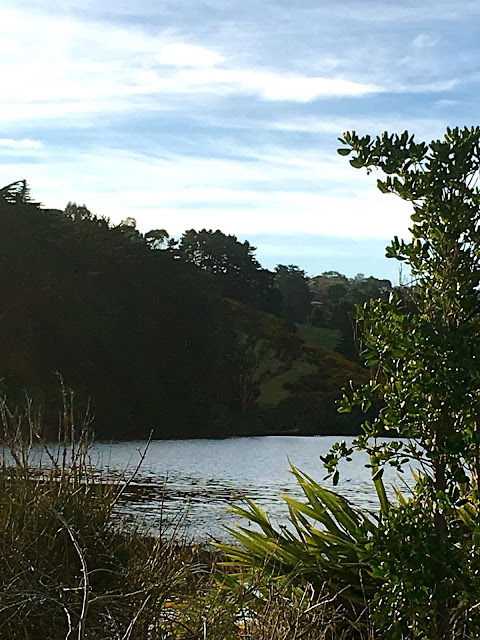 The two photo above, are of a lagoon just over the hill from where I live. It is a site known for its birdlife and despite its definition as a lagoon, is not inundated by the sea, but rather has the characteristics of a small, shallow, coastal lake.

It has an upper and a lower side (known as Top and Bottom; an example of the prosaic nature of New Zealand's place names) and several creeks which have their origin somewhere in the peninsula hills, run into it. Like a tiny, faraway twig of a grand family tree, this largely unremarkable body of stream-filled water, does in the end, connect to the mighty Pacific Ocean. A short and also unremarkable stream is where the connection lies.

'Owing to the pastoral nature of much of the surrounding land, nutrient runoff into the lagoon is frequently high, resulting in its often eutrophic nature'. (Wikipedia). This means that it can have a high algae content and sometimes suffers from algae bloom.

The main creek that runs into the lagoon, is Lagoon Creek (again, an example of European settlers' habit of giving New Zealand prosaic names for geographical features and place names - for example, South Island, North Island; and in my opinion, all the more reason to support the policy of going back to the original Maori names, which are far more interesting and poetic).

Lagoon Creek (which will have a Maori name for sure, but I can find no reference to that fact) begins where there is a prominent hilltop memorial, or monument, constructed in remembrance of soldiers of World War One.

This 10-meter tall bluestone column was placed on a spot originally known as Big Stone (could you get anything more prosaic?!) but which was then re-named Arthur's Seat (an example of many such allusions to Dunedin's Scottish heritage). However, it is more popularly known simply as, Soldier's Monument, and is a popular place for people to climb up to for stunning views over Otago Harbour, Peninsula and surrounds. 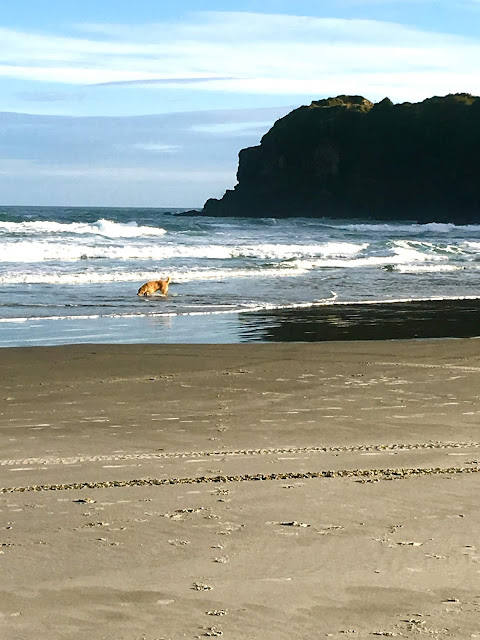 Yesterday I visited this beach with my daughter-in-law and grandchild with a river-like name. It was a spectacular clear winter's day. Across the road from the beach lies a puddle-like tributary of the lagoon. I pondered for a second or two on the fact that in the end, all rivers run into the sea. Including, eventually (slowly, unobtrusively, slyly and shyly) the comparatively still, and sluggish waters of the Tomahawk Lagoon. 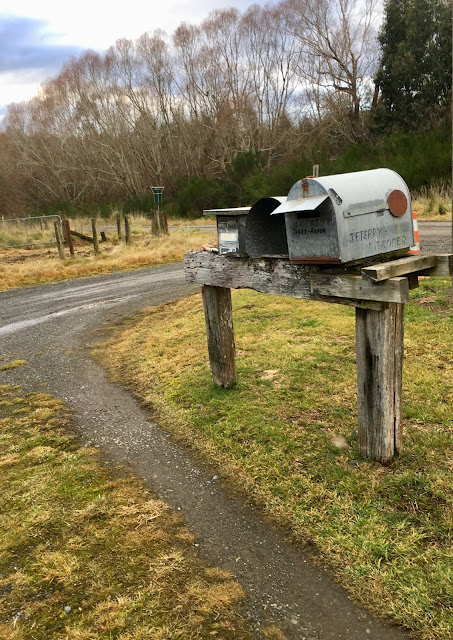 Mailboxes are becoming a thing of the past. Soon all mail will be delivered to the door by courier. You don't know what you have until it's gone. However, watch this space as they may well come back. There are places in New Zealand that are bringing back glass milk bottles.

Sci fi . futuristic novels and movies don't quite get it. Humans are basically nostalgic creatures, reluctant to completely let go of the past. Hence despite their predictions that by now we would all be living in plastic homes furnished in pure white modular units and eating dried food, here we are buying antique furniture and eating real food from our own gardens, or at least, locally produced.

I think the key to predicting the future is simply waiting and seeing. 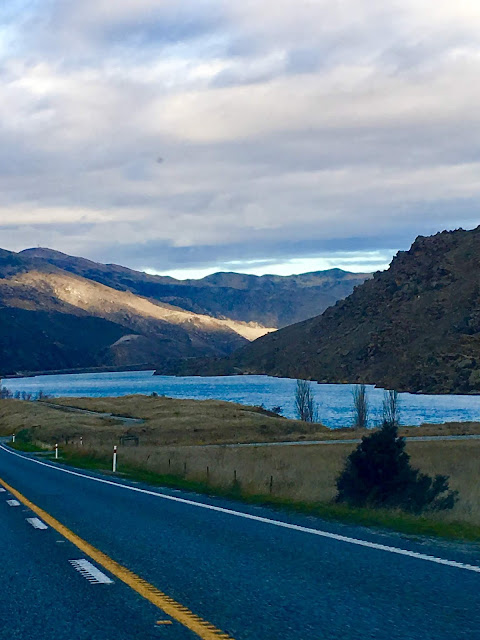 
My sister and I like to go on road trips - we call them roadies. Last month we turned our noses south (usually our preference this being 'home country' for us).

We headed straight for the place where we spent our early childhood. 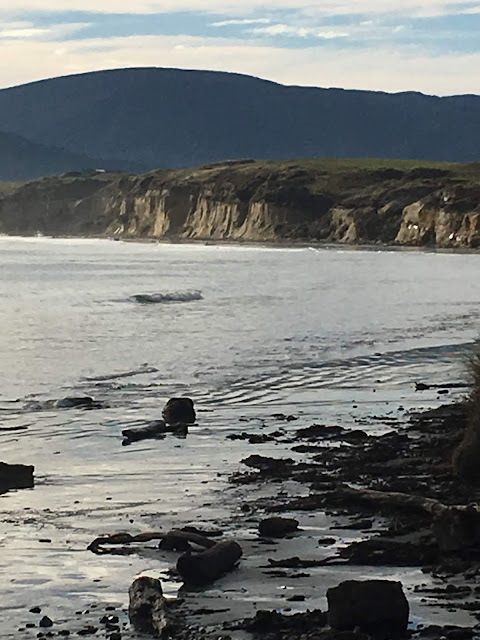 Te WaeWae Beach and the crumbling clay cliffs of Orepuki

The tide was in when we visited which meant that Monkey Island was an island and not looking like some large abandoned rock. 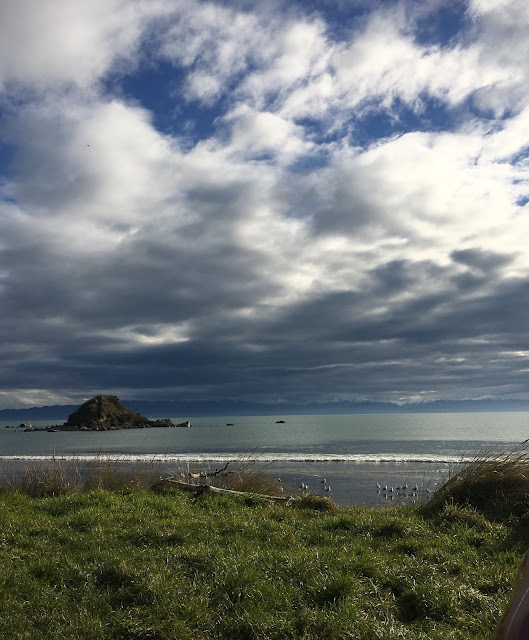 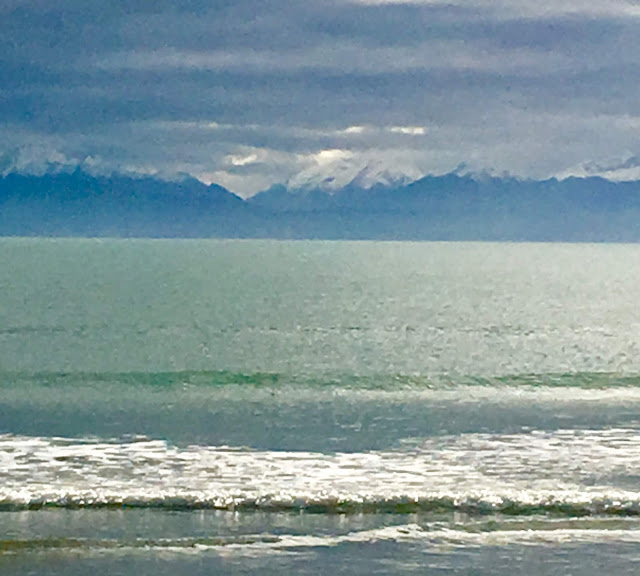 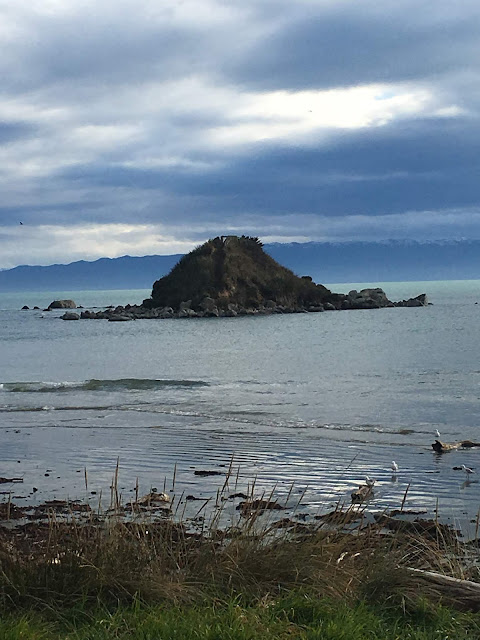 The sea looked magical in the mid-day light. 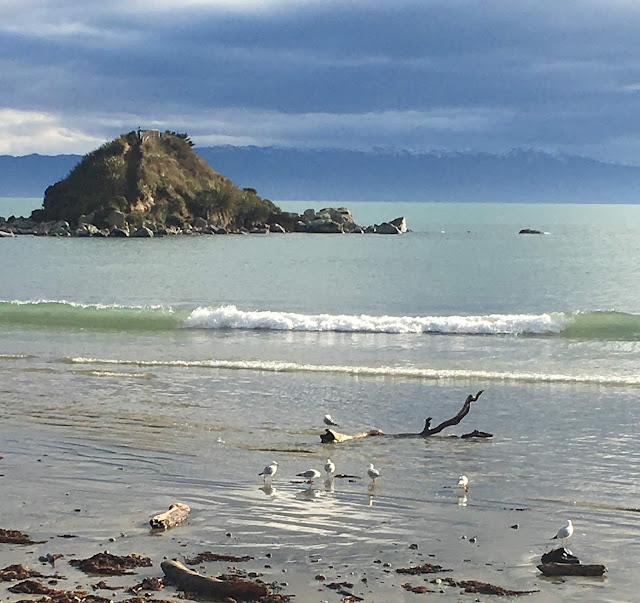 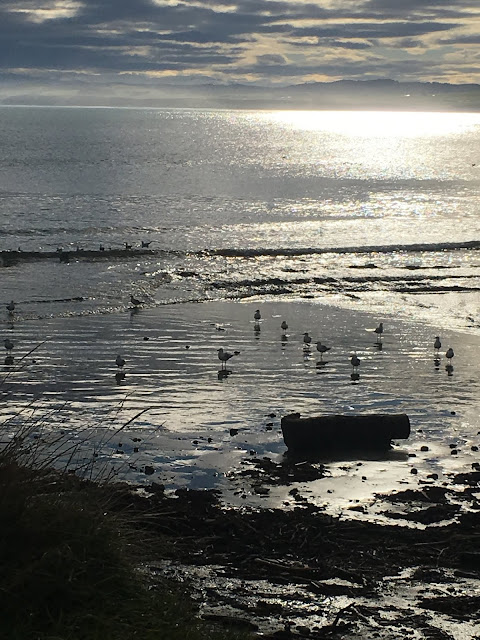 After a cup of tea and a scone in the Orepuki Beach Cafe (the building where the cafe is located was once our great aunty Mary's home. It is always a thrill to sit there and recall past times and the history of the house). 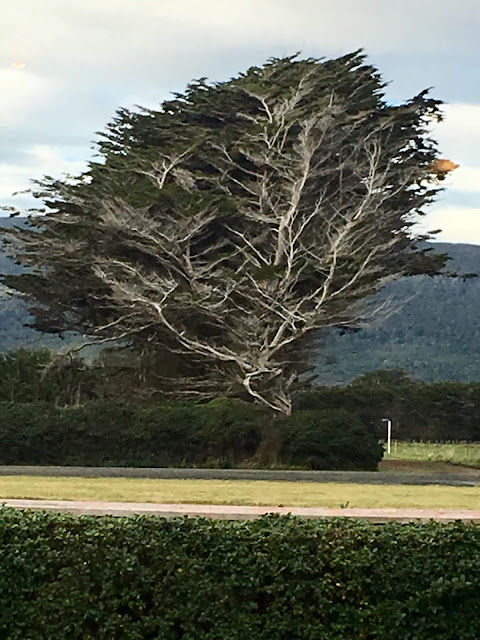 From the cafe a favourite tree of mine is clearly visible. I well remember this tree, ravaged over the years by sea-salt laden winds. Behind it, the bush-clad Longwoods range. 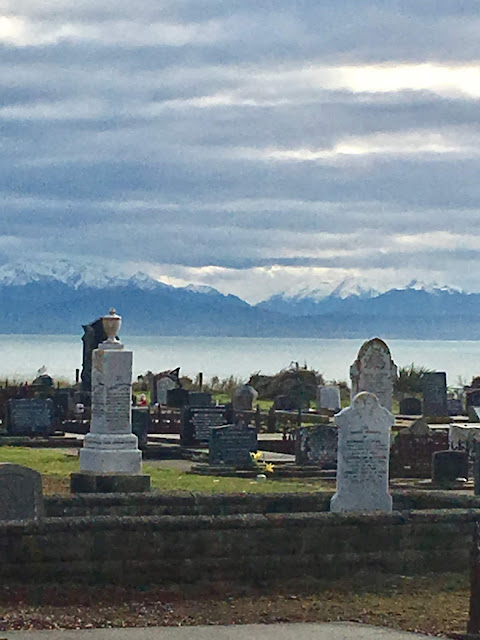 This visit was tinged with sadness because our dearly loved Aunty Lorna Lee (who in recent years often accompanied us on our road trips) died in January this year. At the cafe she has left books and records she had of her beloved Orepuki for people to look through. There is also a book or two of mine there.

We visited the cemetery and sought out some of the graves of relatives and ancestors.

It must be one of the most beautiful cemeteries in the world. 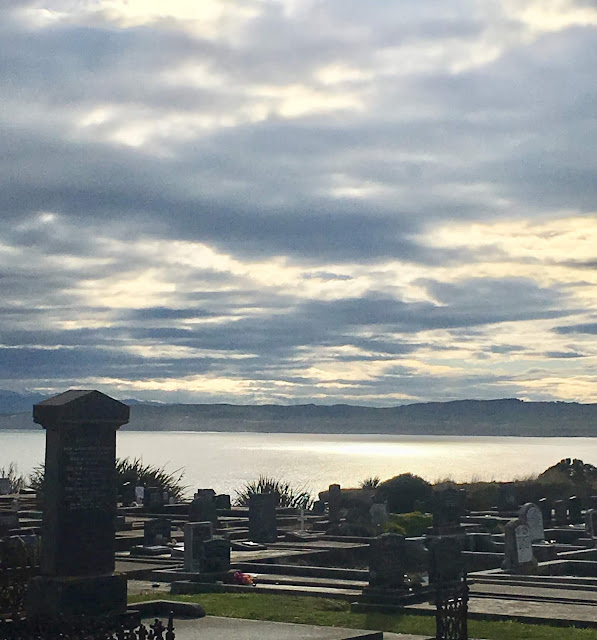 From there we headed farther inland to spend the night with our brother in Riversdale, on the way exploring more of Southland's hidden gems, with rivers quickly becoming an unfolding motif of the trip.

But more about that another time.