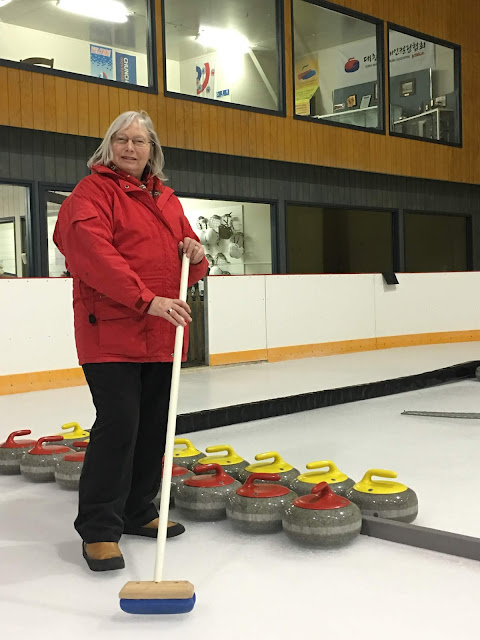 Robert and I go curling every Tuesday night through winter. We started last winter and as we escaped concussion or broken bones, have turned up again this year.

Apart from the obvious benefits of fun and exercise, I also enjoy the cold ice. By nature I am not a 'tropical bird ' - even though my DNA results show a (entirely expected) Pacific Island - Hawaiian - Mid-China strain. In my case, I suspect the 38% Scottish strain is mostly to the fore.

That I am learning in each of my turns to wield and control, direct and aim, manage and choreograph, a couple of cheerful-looking, highly-polished granite stones (or rocks as they are sometimes referred to) also adds to my enjoyment. Along with the tam-'o-shanter camaraderie.

I am disappointed though that no-one has offered me a complimentary (or congratulatory; depending on the circumstances) wee nip, or dram, of whisky. I though that was par for the course. I'm putting it down to liquor licensing laws.

A curling poem is simmering. I have a feeling that it will have something to do with stones aka rocks, that sometimes 'kiss', sometimes 'kill'.

This time last week while the royal wedding bride, Meghan Markle, was still asleep (or if she wasn't, should have been) on the night before her wedding to Harry, I was reflecting and pondering on a silent, mini-retreat out at Brighton - a small. seaside town on the outskirts of Dunedin.

Among other pleasant sights, the Otakia Creek on its drift to the sea, the manner of its cut through rippled, wind-and-tide patterned sand, was both inspiring and soothing. 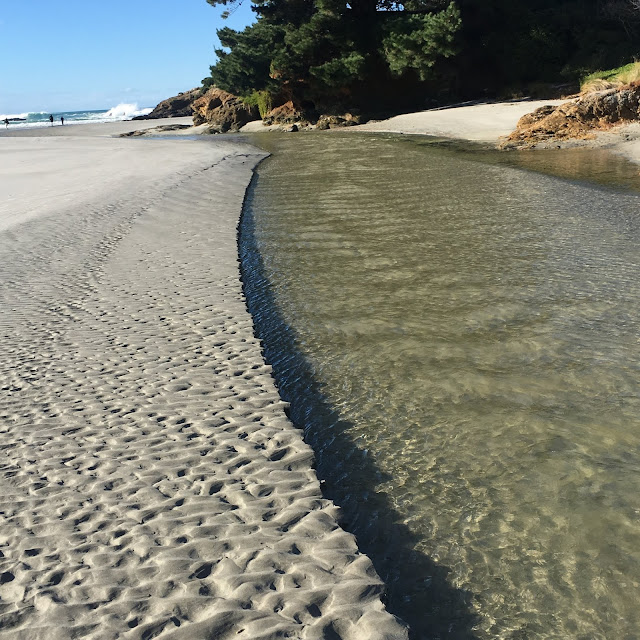 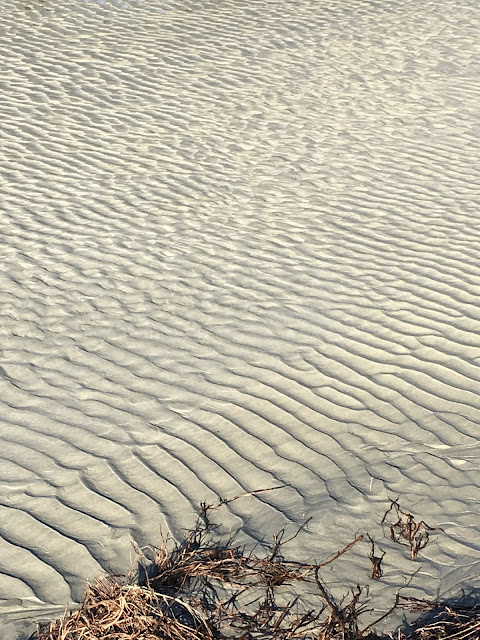 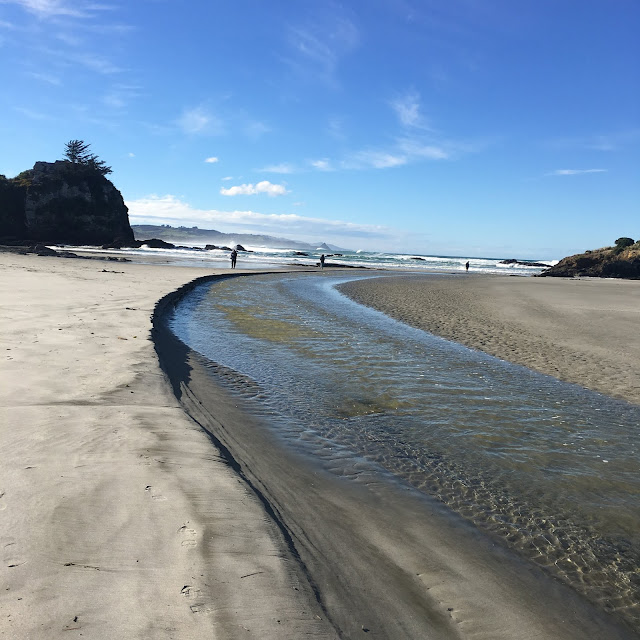 And so I drifted into the week ... uplifted by a couple of words and the ideas those words bestow. Sadly they are words that through over-use, mis-use etc. have become cliched. But when looked at from another angle, they hold power. The words are Freedom and Love. 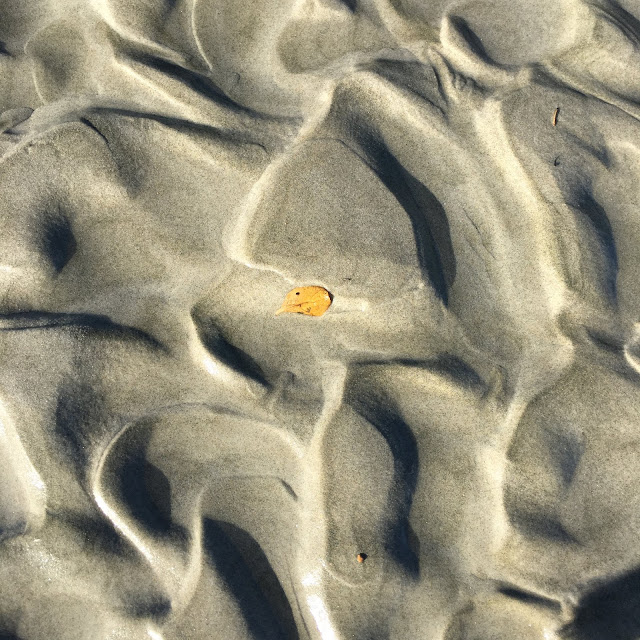 So of course all I could see in the ripples, were hearts. And teardrops.

As I head into another week, as always, family and friends are here for me as both buffer and spur. I think another word should be added to my arsenal - Thankful. 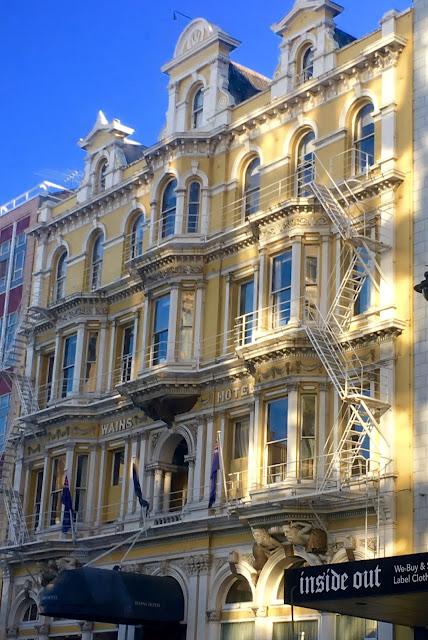 Wains Hotel. Taken from out of the bus window yesterday.

Lately I have been enjoying life more than I have for a long time. If you want a bit more more elaboration as to the whys and wherefores, go HERE

One of my husband's favourite songs is 'Freedom' as sung by Richie Havens on the Woodstock album.

These days I can hear that song ringing out in my inner ear.

It's all something I do not take for granted. Ever. 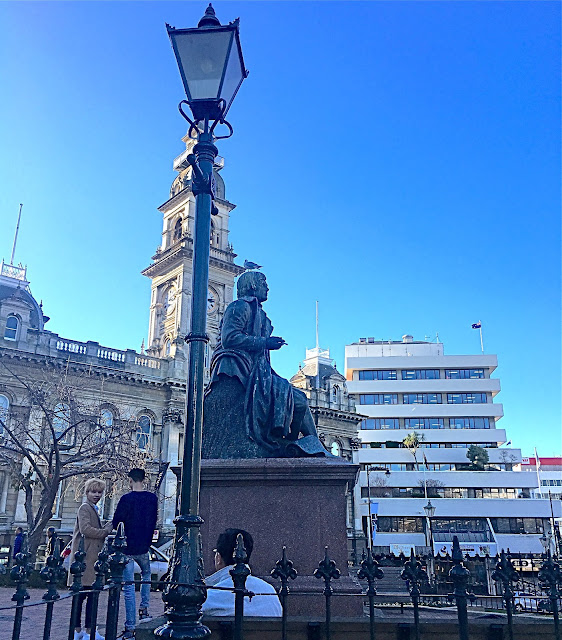 My very Scottish city, Dunedin. This photo was taken in the Octagon (the eight-sided middle of the shopping centre). In the background, the Town Hall and in the foreground, a statue of the Scottish bard, Robbie Burns.
If you look closely you'll see that yesterday Robbie was holding a joint / smoke ... No doubt placed by some joker, or protestor, and no doubt it will have been removed by Council workers by now. Not a good look for tourists. I found it rather amusing, however. I liked the idea of Rab chilling out, having a toke while the ever-present, opportunistic seagull took a rest on his curly locks.

Dunedin (the old name for Edinburgh) was settled by Presbyterian Scots, one of whom was Robbie Burns' uncles (or was he the nephew? Nae matter). Some would say that a remnant of that conservative Scottish influence can still be found in this rather reserved city. There are families living here who can trace their ancestors back to the first settlers who arrived by ship from Scotland in the 1860"s. However, Dunedin is growing more and more cosmopolitan, and I for one love to see that. Different cultures and languages and customs, add welcome variety and diversity. It's what makes the world go round. Its where progress exists.

As well, Dunedin prides itself on being a UNESCO City of Literature. However, in my experience, so far it is failing to fully employ, or utilise, this status. The city is not very good at supporting the people who supply the literature. Not on an equal basis, anyway. It needs to embrace more innovative means of supporting the many writers and artists who live in Dunedin. 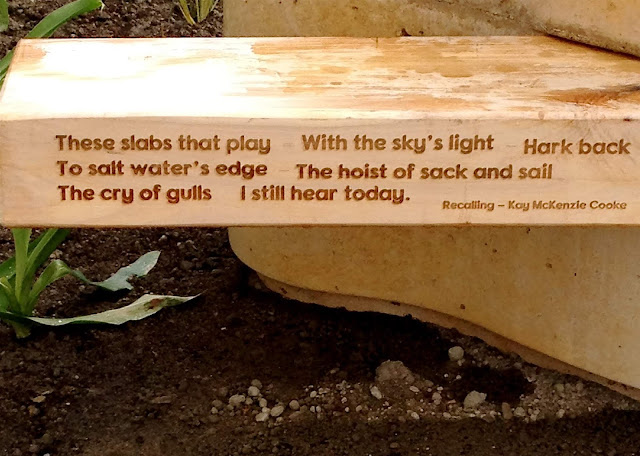 I am pleased to have been included a little in the Dunedin lit. scene, with a poem of mine being printed on a wooden seat in a part of town that is being refurbished to enhance the historical aspect of what was once the city's wharf area; now quickly becoming a place for cafes and artisan studios and businesses. 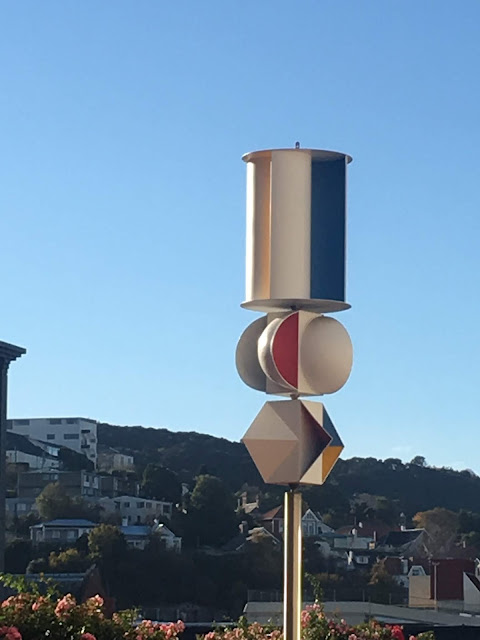 Another Dunedin icon - a rather more modern one than the Burns statue. A wind sculpture positioned outside the city's library. I'm rather fond of it. It has a very eighties vibe. I have no idea of its official title, but I quite like the idea of dubbing it the Twirlyjig.

Ah, the freedom to give a sculpture a nickname, to blow with the wind; or not. At present I am in the mood for leaning towards following whims and where the wind takes me. Let's hope it doesn't twirl me dizzy, or simply lead me back to where I started from.
- May 17, 2018 7 comments:

There Are More Things To Life

This is where I blog ... Here is My Website 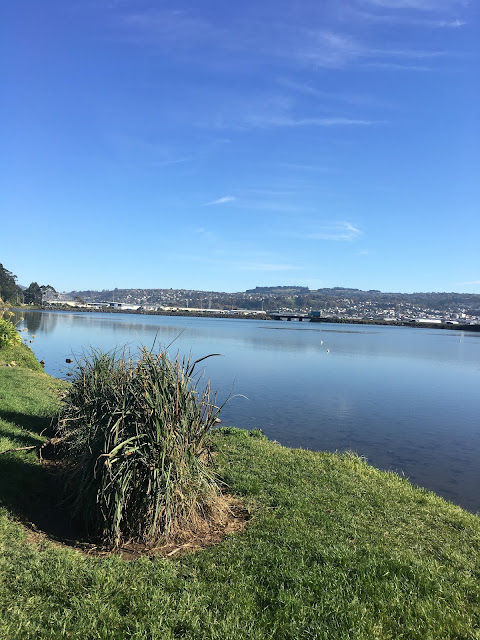 At the bottom of the road from where we live, the Andersons Bay inlet provides an interesting and picturesque place for a wander. Here one can sit on a bench and look over the inlet and harbour towards the city where all the busy bees are working away. 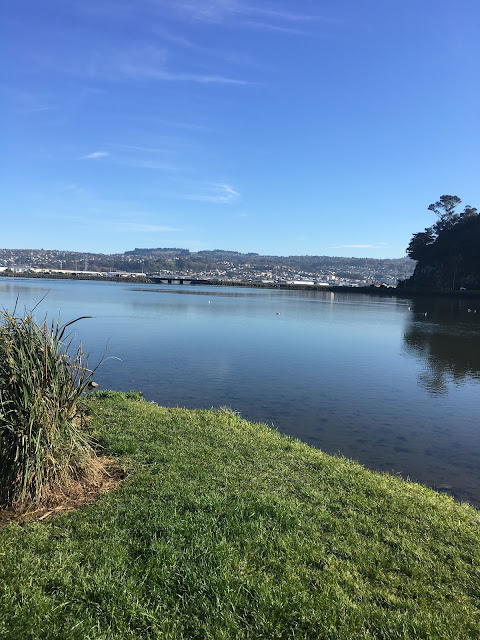 I am thankful that circumstances (mainly a generous husband who agreed to take on the sole responsibility of bringing home the bacon) allowed me to retire from paid employment early. Four years ago I stopped working as an early childhood teacher to concentrate on finishing a novel. I have achieved that. Now I am looking for a publisher. They are like hen's teeth in New Zealand (Especially for a first novel). Looks like it may have to be self-published.

Meanwhile, ideas for a second novel are brewing. 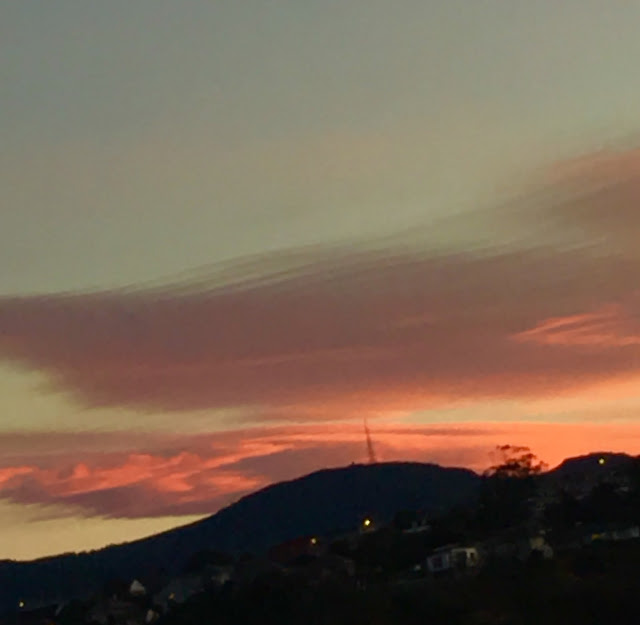 
As well I am also editing my fourth collection of poetry. Also requiring a publisher at the end of the edits.

Achieving my writing  goals has been satisfying indeed. But even better, this year I turn 65 years old and qualify for Superannuation. The pension. In NZ, dubbed the Super. To me this feels like being paid to write. At long last, after writing seriously (virtually unpaid) for thirty years.

It feels like it's been a long time coming. 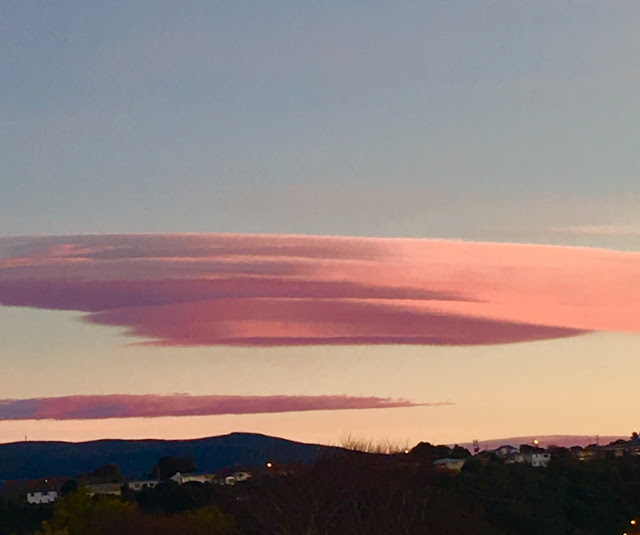 Again, this morning's sunrise, this time over a piece of land nicknamed Old Swampy which lies at the back of Dunedin city

These days for me, writing isn't everything it used to be. It is no  longer the be all and end all. Grandchildren and gardening, reading and walking are some of the other things also up there among my priorities and passions. These are also less likely to break my heart. Rejections in the writing sector (as in any creative pursuit) can appear relentless.

My husband has just reminded me that we have Curling tonight. First game of the season. We took up the sport of curling last winter and loved it. After enjoying curling while on a working holiday in Aviemore, Scotland in the winter of 1978, we always said we would go back to it when we were older. We are definitely older and we have gone back to it. Just as a hobby. Not Olympic-level, you understand.

As the leaves fall, bidding the world their last hurrah with their brilliant hues, we begin to look forward to winter. Even though it's sad to say good-bye to the warmer days, there are things to look forward to in winter. Soup, watching movies by the fire, mulled wine, winter fashions, snow (I like snow) and ... curling.