BerKlin - Putting the K into Berlin 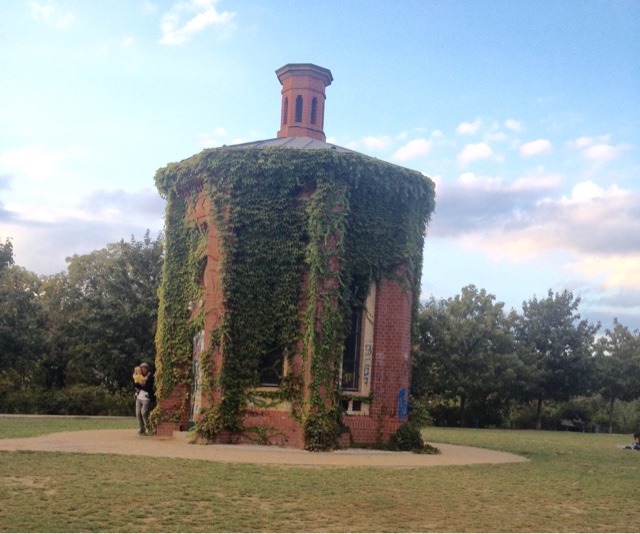 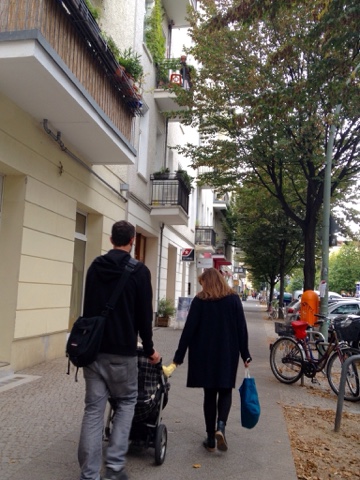 Following behind my son, his partner and daughter as we walk down a strasse in Prentzlauer Berg. Above, the familiar sight of Berlin balconies. 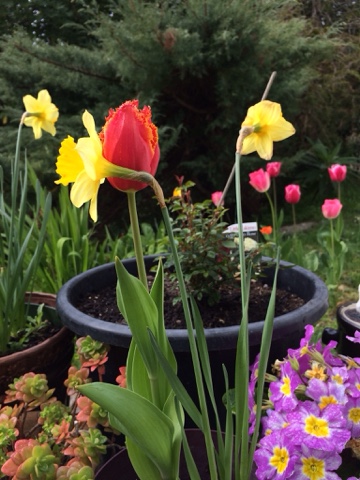 Just had to include the photo my husband sent me of flowers in our garden back in Dunedin, New Zealand ... Where it is Springing. 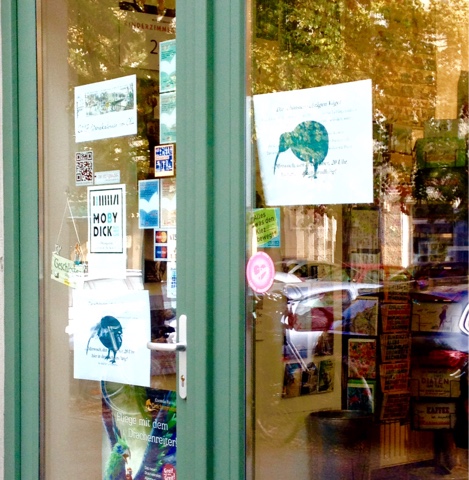 Two kiwis in a shop window ... I wonder why they are there? 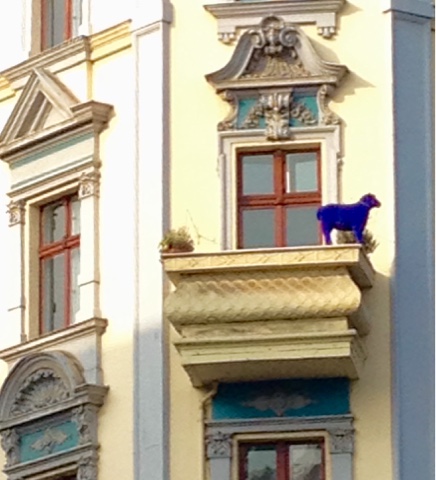 And a blue sheep? I wonder if it's homesick? 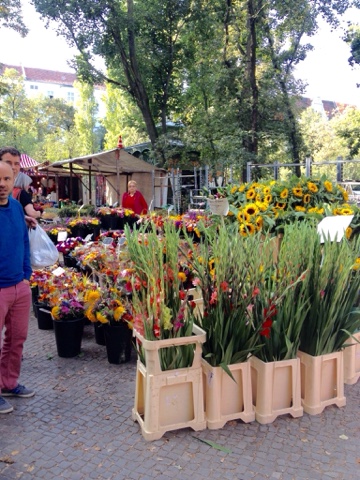 Saturday was market day. What a fantastic market, with everything you need for the week ahead. 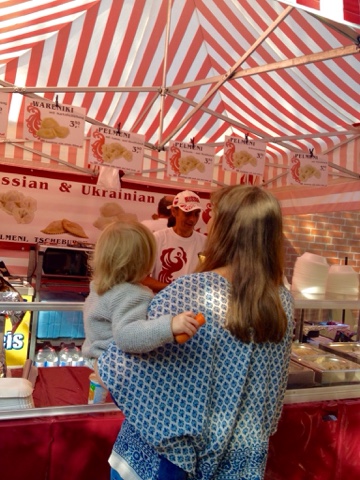 There is no room for reticence in Berlin.

If I lived here permanently, I would buy a bike and learn the Berlin strut. 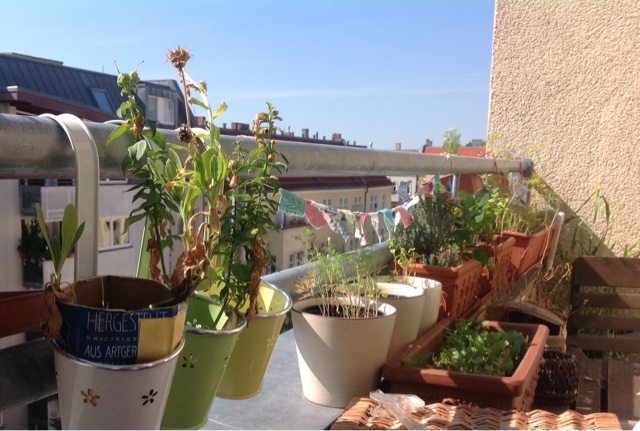 Where I'm staying at my son and his partner's apartment in Prentzlauerberg; in what was once East Berlin 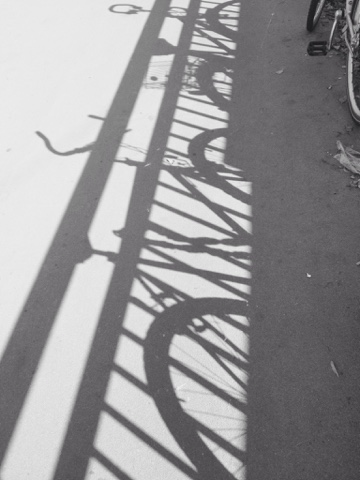 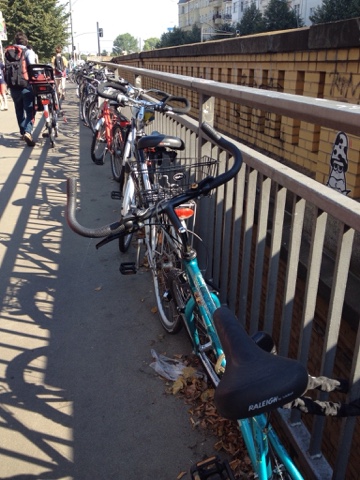 Bikes and Berlin go together 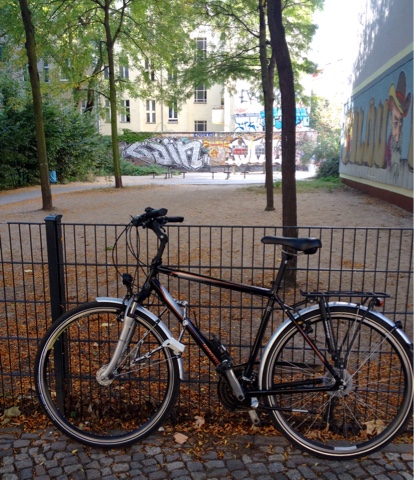 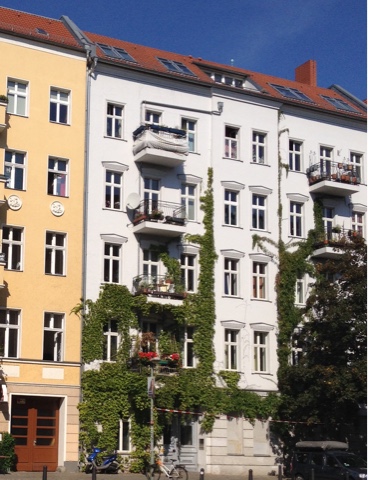 I'm rather taken by the full frontals of Berlin apartments ... 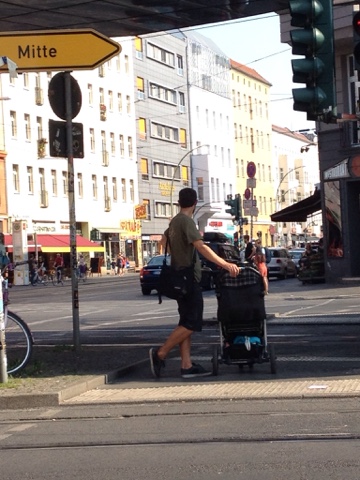 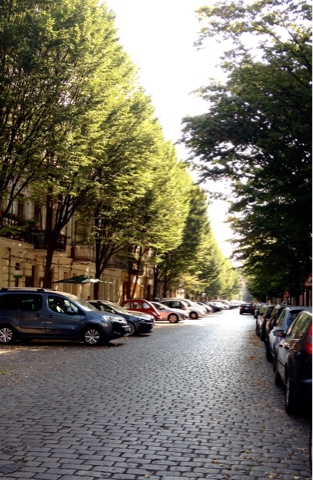 Just one of the many tree-lined, cobbled avenues around here 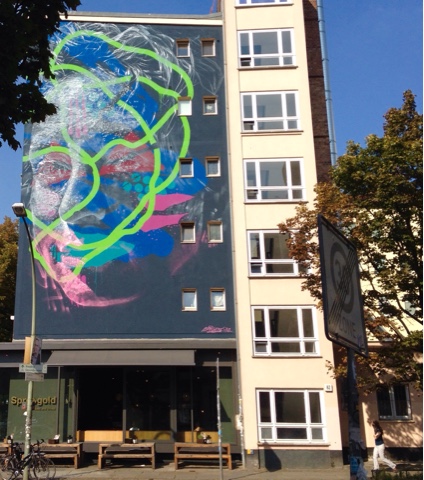 Street art and tagging is rife in this city 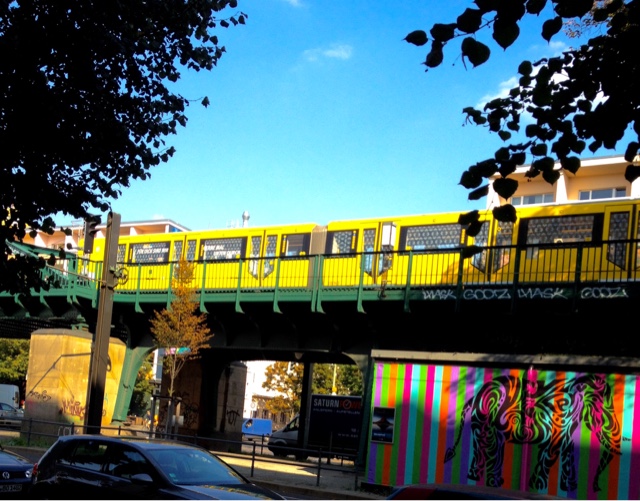 Yellow is such a great colour for trams 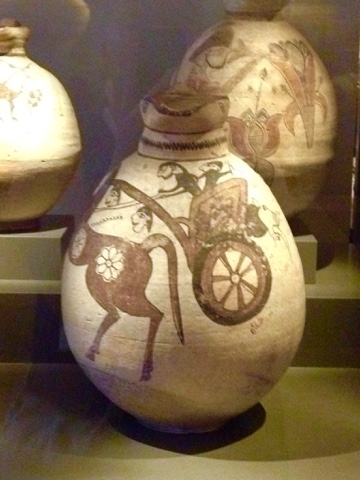 I appreciated visiting Berlin's Neu Museum and the many ancient pottery and ornamental exhibits on show there from places such as Egypt, Cyprus and Eastern Germany ... Stunning. Including the bust of Neferetiti (not allowed to be photographed). 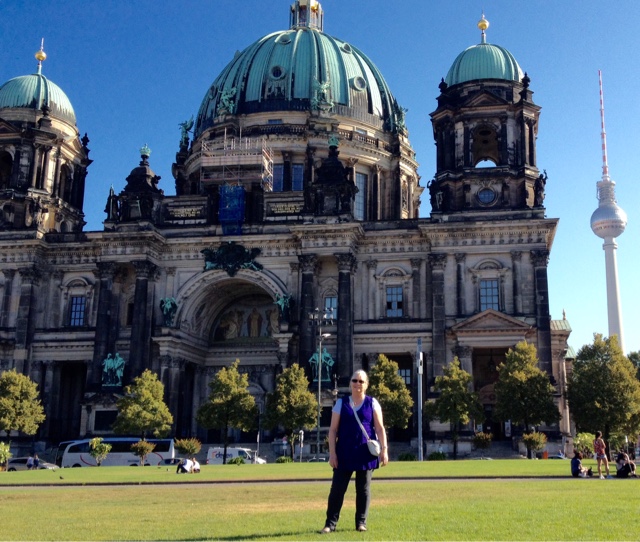 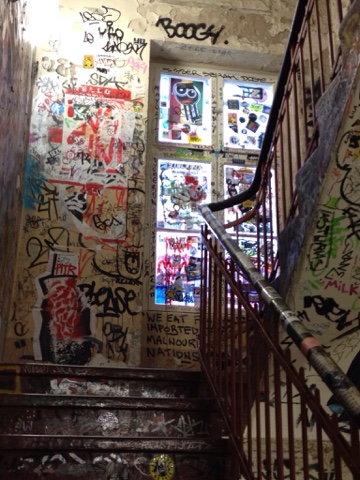 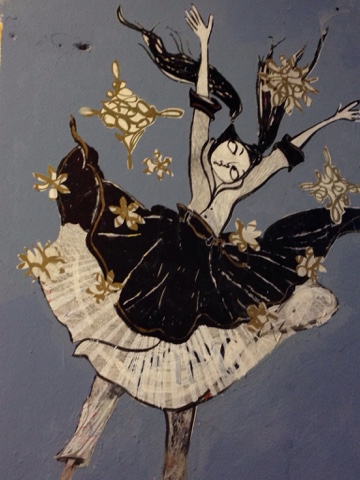 My fav. piece of street art so far 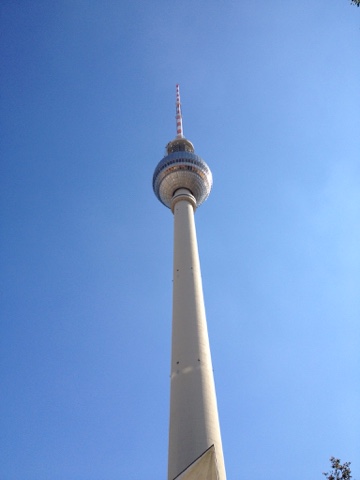 No portfolio on Berlin would be complete without ... 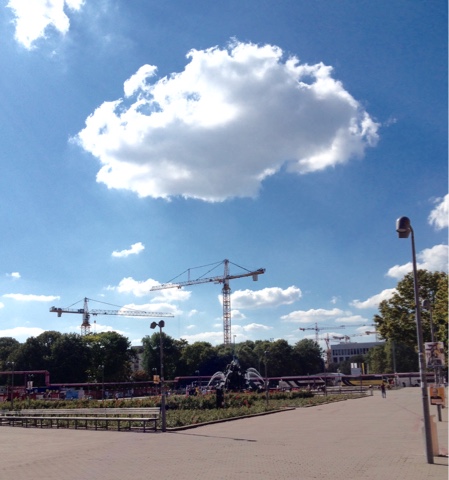 My son says he wonders if Berlin will ever be fixed. Everywhere there are cranes and street works ... 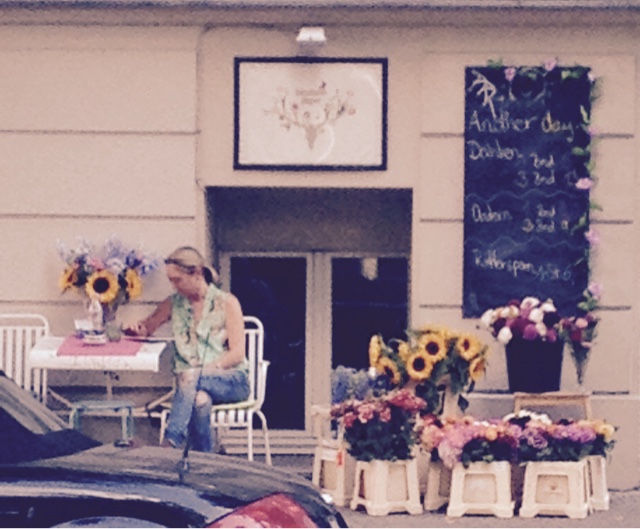 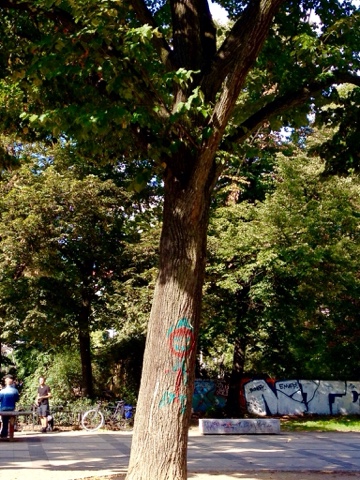 Even the trees don't escape the taggers of Berlin 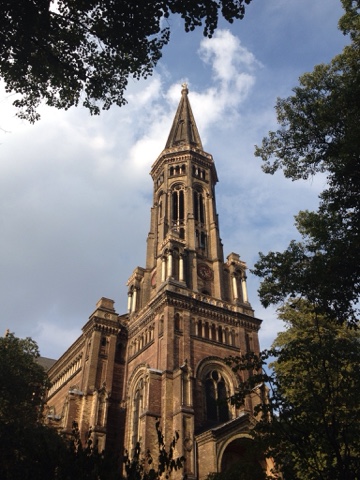 Zionskirche ... Historic for the part it (and other East Berlin churches) played in the fall of the wall.
Churches and trees are a significant feature of Berlin. I particularly appreciate the trees. As I write the leaves are turning. Maybe I will get to see them in all their Autumn glory before I leave here. Certainly expect some photos of the process.
***
Dear Reader,
Travelling overseas for someone as right-brained and spatially-impaired as me, creates a steep learning curve. Negotiating airports; finding and getting to the correct gates and then once landed, managing such formerly simple things - such as keys (did you know in Europe the keys seem to turn in a different direction?) adapting to apartment living, trying to be in the right place at the right time (more difficult than you'd think for my non-spatial brain) remembering when walking to stick to the right - not left!!! because that puts you in danger of wandering into a bike lane and getting bowled over.
Oh! and working out rail ticket machines. Don't get me started on those.
Etc. etc. etc. etc.
It's all been about training a very right-leaning brain to be more left; waking up my slumbering left brain. So, I've been doing crosswords. And one-nostril breathing! Apparently that encourages left-brain thinking. Who knew? (The experts, that's who).
Listening to music is also meant to strengthen left-brain activity. (That's an easy one. On with the headphones and turn up Spotify, real loud).
An inherent shyness, or fear of rejection, or both, usually prevents me from asking for help. Here in Berlin, speaking English is not considered a problem, but even that is not proving enough of an incentive for me to boldly approach strangers.
Oh how stuck my brain feels. How slow to process. How shy. How socially awkward. How dis-located, here at the wrong end of the clock.
Kay
- September 19, 2016 2 comments: