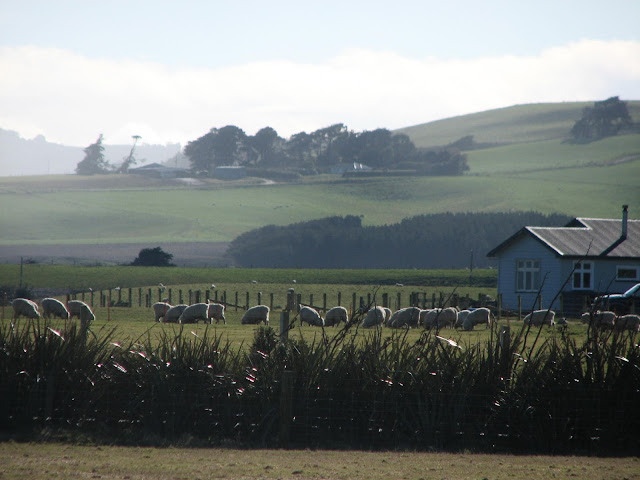 "Get a photo of those trees in the sea mist", my sister said. 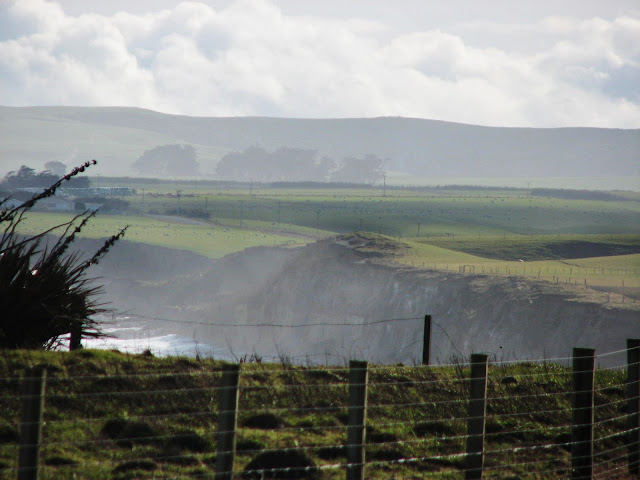 We were back in one of our favourite places, the place where we were brought up, in Orepuki, Western Southland. 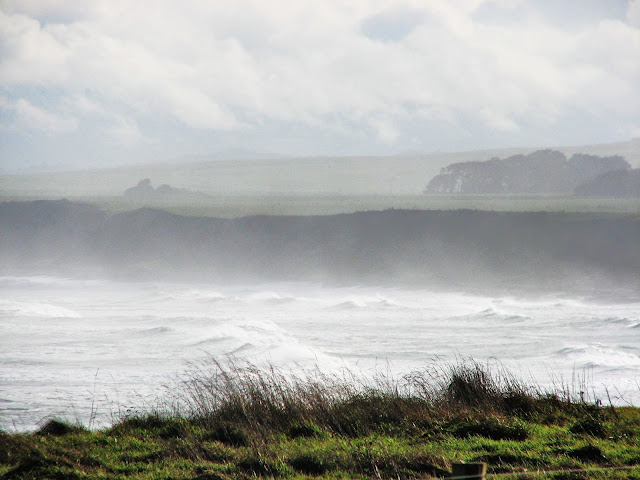 The sea was in high dudgeon - as it often is there. The deep swell and roar thrilling and scary all at the same time. 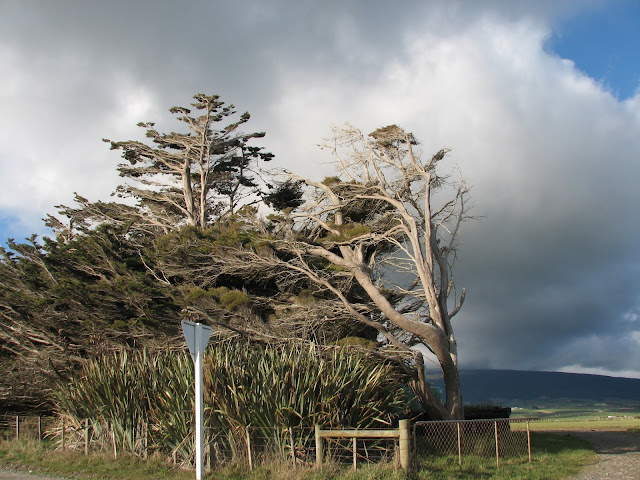 The trees tell the story of this place of salt-laden winds. 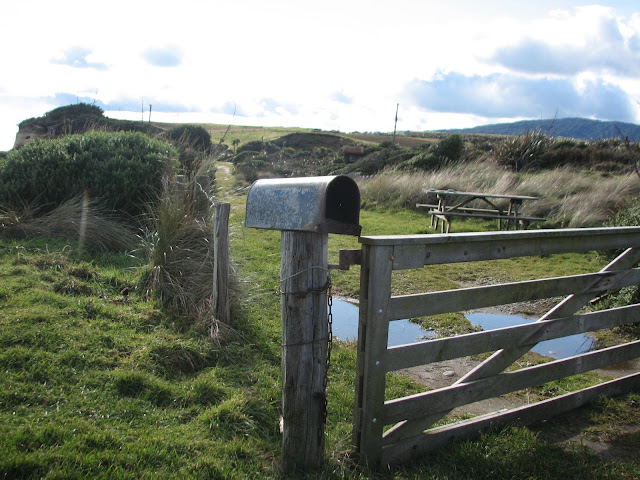 We agreed that it's a wonder the little house has survived this long, hunkered down under the cliffs - unseen in this photo, but easily imagined sheltered under wind-swept trees. 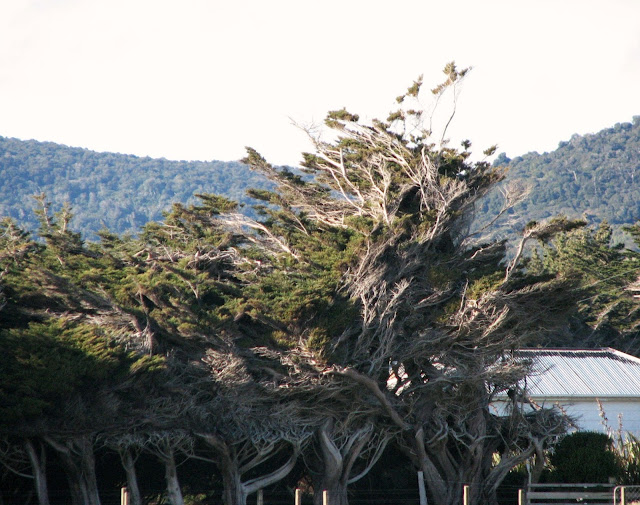 "Take a photo of those trees". 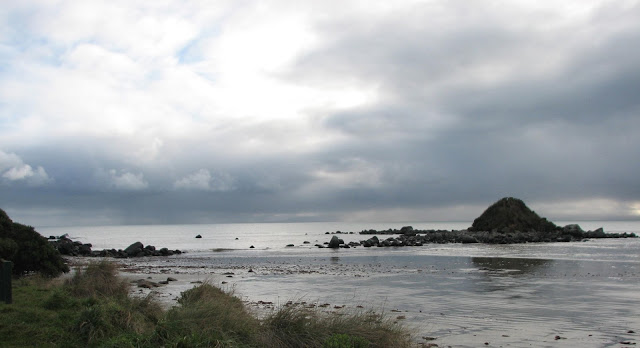 Of course we had to go see Monkey Island. The tide was in, so no scramble to the top today.
I swear it gets smaller every year (and it's been over sixty years now that I've been paying attention). 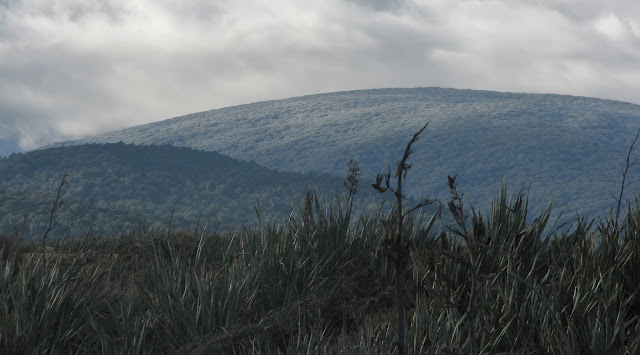 My sister wanted a photo of the Longwood range with its dusting of snow on the top (you can see it if you look closely). We remember how these hills stood like guardians beyond the back of where we lived in 'puki. 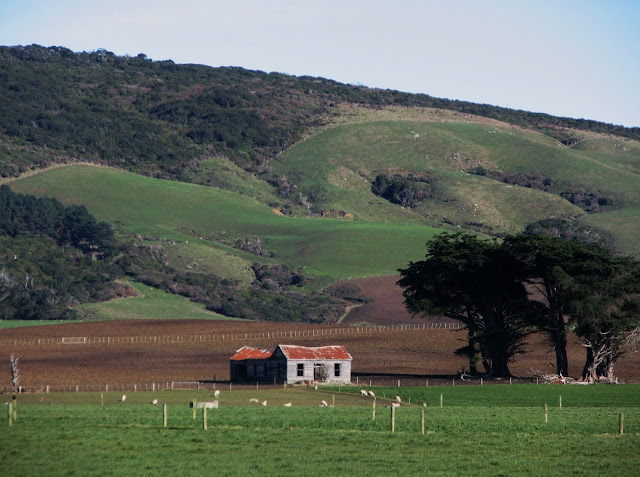 And of course, the obligatory photo of our great, great, great grandparent's home; York House. Now over 150 years old. My aunty has an idea it was built of kauri. Maybe that is why it is lasting so long? We'd love to see it receive protection status as a heritage building ... but how does one go about trying to get that established?
Ah well, photos will just have to do as a record.
At the back, Pahia Hill that was once covered in bush. 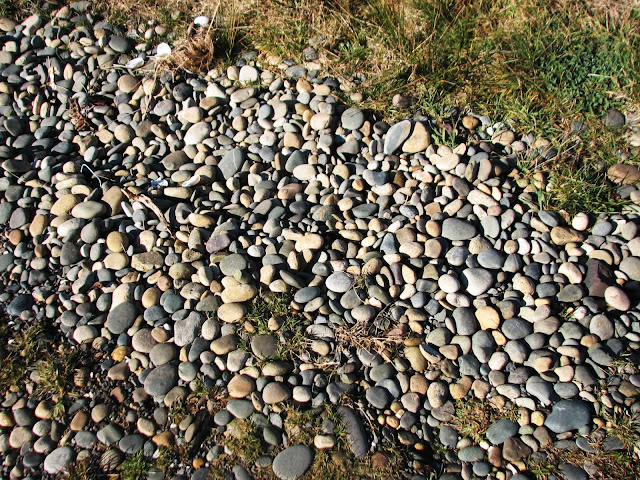 Down the road from Orepuki is the sea-level settlement of Colac Bay, where these stones had been dumped by the ocean on the side of a road by high-sea encroachment. Part of the narrow gravel road that winds alongside the beach, was closed due to the damage. 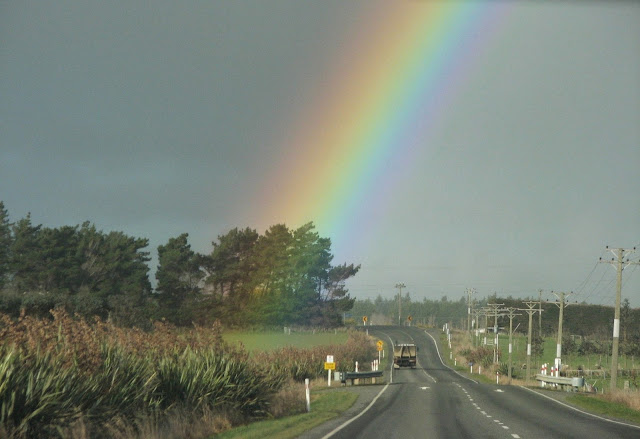 All day we had been seeing rainbows, with the fattest, brightest rainbow any of us had ever seen blasting away right in front of us as we travelled home on the Lorneville - Dacre highway.

There is more to tell, but I'll leave it for another time.

Suffice to say it was a rich visit comprising, among other things, of a hunt for the location of ancestor graves, the smallest library in New Zealand and the naming of streets no longer to be seen.
- August 08, 2016

The New Zealand that does not feature in tourist photographs. Loved those images of the wind-swept trees and the rainbow, Kay. Also that characterful old family house

Is this the area of the famed spherical rocks on the sea shore (which do feature in the brochures)?

Avus- I think you are referring to the Moeraki Boulders? They are on the east coast of the South Island up the road from Dunedin. The place in this blog post is on the southern coast of the South Island - down at the bottom. But there is a beach there that is popular for tourists because of the gemstones that can be found there; maybe that was what you were thinking about.

Thanks for putting me right, Kay. I had confused Orepuki with Moeraki! Be kind, we last visited your lovely country about 10 years ago and I am settling in to senility!

Avus - I just think it's marvellous that you know so much about our dear wee country; just gently setting you right so that your education remains complete. Senility?! Never.

So cool to see this detail of Orepuki online. spent nearly every weekend there as a kid, and to find out that York House is there. many wonderful memories from those days. Many years later , I have named by daughter York, before I even knew about York House.