at the Waikouaiti races (poem) 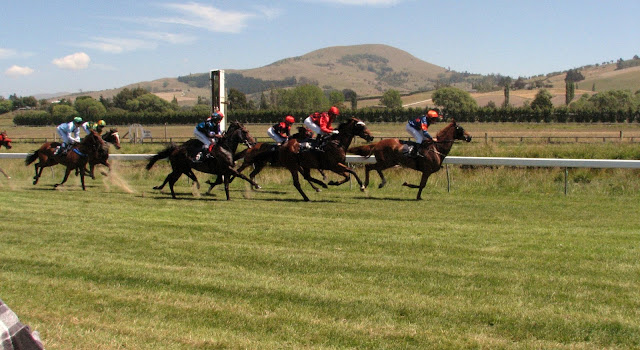 photo taken at the Waikouaiti races in January this year


at the Waikouaiti races
On the loud speaker;
'Don't blow the bubbles while the horses are running'.
The woman in the deck chair
on the rug beside us calls out to a friend,
"Happy new year! Everything sorted?"
There are paradise ducks, skylarks and seagulls
at the Wakaouaiti races.
And a bubble machine
for the kids.
"Now she's having a baby to another person".
Again, the woman on the picnic rug next to us.
"I haven't  had a drink from a glass for years".
Bubbles and seagulls.
'Don't blow the bubbles while the horses are running'.
The horses in the Birdcage
gleam like acorns.
There is the smell of horse sweat
and horse dung and dandelions and hay.
A woman with bouncy hair
leads a raspberry-blowing,
chestnut horse.
The horses on the track
make the ground shake.
Their gallop to the finish line a testament
to the power of rhythm and speed.
From the loud-speaker,
a message from the sponsors for this race,
Hope Funeral Directors:
'You never know when you're gonna go'.
'Don't blow the bubbles while the horses are running'.
Kay McKenzie Cooke

The Notes App. on my phone is very useful. The notes for the poem above were made on this App. It's handy when you can't get to pen and paper.

At last it's raining. We need rain. The garden is gasping.

It's bulb planting time. I need to time it this year so that the tulips are in flower after I get back from Berlin in October.

The trick is always in the timing.

What's a horse weigh? I've just checked: from 380 to 1000 kg. Yet it can be freaked out by something weighing, say, 0.01 gm. That's nothing, I can be influenced by an idea which may weigh nothing. As you have been, except that now the result can be measured, not in terms of mass but in terms of energy: a 1 MW poem. (Just in case you're disappointed by the figure 1, let me add that in this case it's followed by six zeroes. We're talking six orders of magnitude and there's a phrase you can be pleased by).

Then there are the race sponsors.

In Jane Austen's day they talked about "sensibility". Now we'd probably say sensitivity. Either way it's a measure of being able to respond. And - even more important - to articulate that response. No doubt you regard all this as unemotional, even technoid: typical Brit. I leave the emotion to the poem and it appears to be in good hands.