a heart-shaped one (poem) 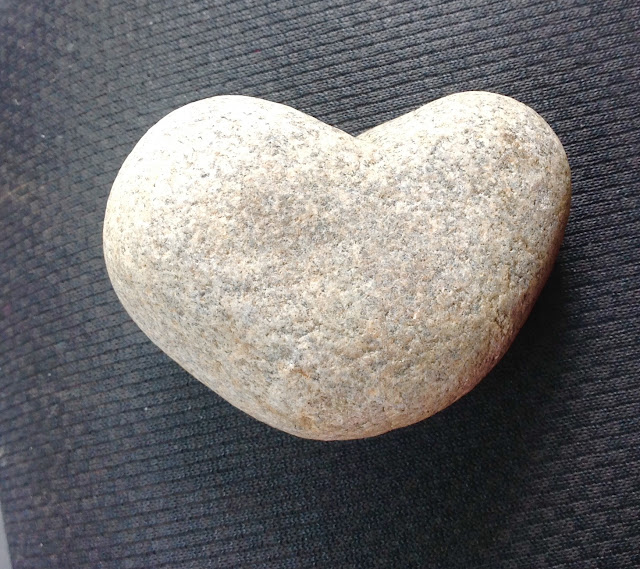 Photo of a stone I found in McKenzie Reserve, Orepuki, Western Southland during our family reunion


a heart-shaped one
Like workers or warriors at rest,
we fold our arms,
as if all tools lie abandoned,
all weapons un-brandished,
for now. It's a family trait,
the way we fold our arms;
just like the way our shoulders shrug
when we laugh.
And who, we wonder, can divine water
like great-grandmother
Agnes could?
Some of us are keen
to give it a go. A shame that no willow
or wire coat hangers
have been provided.
We'll make sure to have some next time
we have a Reunion,
when we will stand here again
in the McKenzie Bush Reserve
and listen to the tuis,
our heads down looking
for stones and  where I pounce
on a heart-shaped one.
"I collect heart-shaped stones",
Cat, my second cousin, says.
I pocket it anyway.
Blood ties only go so far.
We stand, arms folded high
over chests, forearmed
against the unpredictable,
as over our shoulders
that shrug
with quiet laughter,
the sea mists
into faraway blue
and between us
and the ocean, lies
the green and deep of land
our grandparents wrought
from forest, by sheer slog.
Kay McKenzie Cooke

My 4th April (NaPoWrMo) poem didn't quite make it on its due date.

My excuse note: I spent all day writing it in between travelling with Robert to Queenstown - where we helped supervise the installation of a stair lift for my mother in law - and back, all in one day (arriving back in Dunedin in the wee small hour of 1.00 a.m.)

I can vouch for its conception on the 4th - just that its reveal didn't quite make it by the deadline.

Off to get some sleep now in order to compose tomorrow's (which in reality is today's) poem.

I love your poem Kay. I Will print if off and pop it onto the fridge door.

Thanks, Tess! I love the thought of it being on your fridge door!