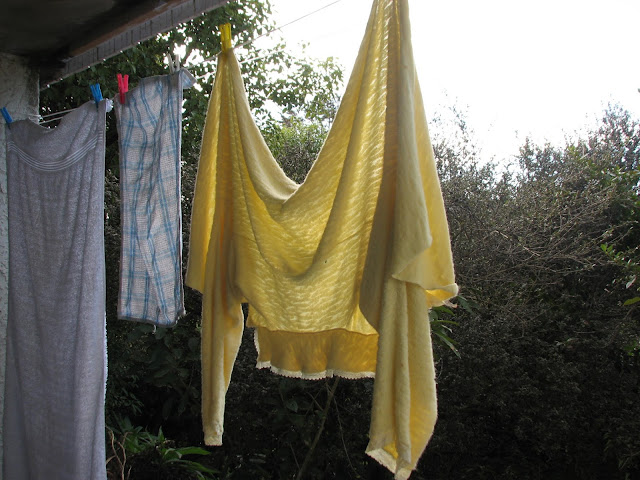 Aptly back-lit by sunlight near the end of the day, my mum's yellow bed-jacket hanging out to dry. It dates back to 1953. She wore this jacket (a rather old-fashioned idea these days, with hospital patients being discouraged from wearing night-wear during the day) for all of her seven stays in the maternity home. On the rare occasions that I wear it, I remember a life well-lived; and never forgotten

Personal journal / diary-type blogging (I'm not talking about journalistic blogs or professional blogs, they are another animal entirely) seemed to hit its peak about nine years ago, just before I-phones and Facebook arrived I conjecture. But the personal blog has now tumbled down to the wire. It appears to me that only those who thrive on the writing process; chronicling, recording, journalling; are still writing personal blogs. Or am I out of the loop? I confess I haven't gone on a hunt for new blogs to replace the ones I used to follow / read; most of which have dissolved into the ether.

A lot of of my blogger-buddies are now Facebook and / or Twitter friends. I still have a blogroll and I occasionally read the blogs on it that are still active. However, most of the blogroll is inactive. Occasionally I'll check up on an old blogger buddy only to find that their blog has disappeared. Others are still there, but they speak from the past and it's like flipping through an old photograph album. Still others are faithful blogger friends (and I appreciate you dear friends - you know who you are!) who have been there with me since the start, but they are few in number.

The audience was kind of the point of a blog, but for me, only when it went hand-in-hand with the actual process of writing. The size of the readership maybe at one stage seemed to matter, but in these 'down to the wire' blogging days, not so much.

When I first discovered blogging in the early days of internet, it was a way of connecting with others with the same interests. When I was a kid, one of my hobbies was writing to penfriends (or penpals). At one stage, I had a pod of about six or seven other kids I was writing to – kids from USA, England, Australia, France … Even from the North Island of my own country, which, yes, in those days seemed exotic. With the advance of the internet, interacting instantly with people, no matter where in the world, through blogging, emailing, messaging, brought back that same engagement I remember receiving from penfriend letters, but with the added dimension of immediacy.

For me, Facebook and Twitter have largely taken the place (and widened) this interaction. And it is a far quicker, more efficient process. One click that you have 'Liked' something tells whoever posted that you are reading and usually appreciating, what they are posting.

Back in the day I would read a blog, comment and expect that they in turn would be kind enough reciprocate. However, at the peak of this to-ing and fro-ing (I guess this would be about 2004 -5 -6?) I found that the whole process of writing a blog, reading other blogs and commenting, was taking 2 -3 hours at a time!

2 – 3 hours was too much to take out of precious time set aside for 'actual' or 'real' writing (i.e writing that didn't involve blogging). If I wanted to keep on writing stuff that didn't incorporate blogging, something had to go. And it did. I gave up reading as many blogs and gave up commenting. As did many other bloggers. Bloggers were suffering blog fatigue. A sudden drop in personal blogging occurred.

When my sister gave me her old Canon, that helped, because I started taking photos, then posting them on my blog and letting them do the talking. In this way, my posts didn't have to involve so much writing and therefore take up as much time.

It also transpired that a lot of my blogger friends (a lot of them writers as well) also found that Facebook was a better way of interacting with like-minds, than blogging – which in the end, only took time away from the real business: writing. However, I wonder if Facebook too is reaching a peak that will soon flat-line?

But that's ok – there's still plain old emails or even phoning. (Not a favourite activity of mine, talking on the phone … Just so you know …) Facebook's almost become a fuddy-duddy thing to do. I don't know what's replacing it, and I don't want to. I'll stick with Facebook for now if that's where friends and family are. (Anyway, I believe I've found it's true genius – locating lost cousins).

All this is a preamble to me trying to work out where I now stand with blogging.

I still enjoy blogging. But not on such a regular basis as before. I don't want to become a slave to it. I like to be free to blog whatever the hell I want, so specialised topics, themes, subjects, regular poems ... and / or certain days-of-the-week posts, are out. That all smacks too much of being beholden, or driven and is not for me.

It seems that blogging has been the perfect vehicle for me to post photographs. But whereas writing is 'what I do' – and to a certain extent defines who I am - photography will always be just a side-line; a hobby. However, in my posts, I can use photography to express myself - without having to write as much as I do when I am working on my novel. (I don't feel like writing huge amounts in a blog post, on top of having just written fifteen hundred words, for instance). This may mean not posting as often. It may also, paradoxically, mean that when I do post, I will write more now, because I won't feel as pushed for time, or that I am working to a deadline.

As far as readership goes. I am no longer going to follow the advice of blogging-experts and try and 'hook in' Facebook friends, or Twitter followers. If people want to read my blog, they will seek it out. If they don't, then that's fine by me. This is going to be an interesting exercise for me – to write as if there's no-one there, and at the same time, as if the whole world is there. In a weird way; it's like starting again. (Google Plus – and I admit I have no idea what that particular mysterious little engine is all about - is maybe another way of reaching people: letting people know I've written something. But even then, I've yet to be convinced it attract readers … I may be wrong. Go on, prove me wrong!)

I will blog because it's what I do. I have always chronicled – from teenage years, I have written journals and kept accounts of what it's like to live in 'my world'. If there are others who find this as engaging or as inspiring or as riveting as I do – then they are my kind of people / reader and I'm happy to have them aboard.

I will continue to write reflectively, rather than an opinionated account of what I think is wrong with the world. Politics will seldom come into what I write. Facebook is where I vent politically and even there, it's only occasionally.
The posts will be un-apologetically personal. In some instances, as personal as my family will allow. Understandably, they don't like me to divulge too much to the world - especially where it impacts on their own personal lives - and I totally respect that, and willingly (naturally) comply. Therefore, the posts will be personal, but when that intersects with family, I will adhere to the non-full disclosure clause.

I know this sounds upside down, or ironic, or counter-intuitive, but as I have already stated, from now on when I do post, I will be writing more that I have in the past. Photos will still appear, but my photography has lessened and hence the photos will be less. Maybe to a certain extent, I have photo-ed myself out. There seems no point in photographing the sea, trees, flowers over and over again.

My posts may now (I'm still unsure about this – this post is a bit of an experiment) take the form of a letter. Is this me going back to the penfriend idea? Whatever. I want to change my style a little. Time for a cool change.

Finally, this may sound odd, but I would like to say Thank You to Blogger and the team, for creating the whole concept of Blogging. They won't ever get to read this, but I'd feel like an ungrateful swine if I didn't say 'Thanks' to someone in the 'blogosphere'; that amorphous, internet-webby-cloudy-thingy, who are responsible for this whole blogging era (and consequently, the post-blogging era - whatever that turns out to be).

My life thus far has been pretty full. Pretty wonder-full. Sometimes I feel it moves too fast for me to keep up, but blogging has become an integral part of my being able to at least 'keep track'.

Take care out there,