Trolleys in the Leith 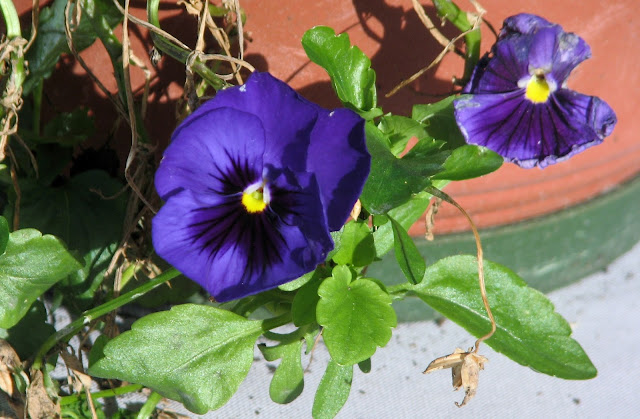 A picture of pansies growing at my in-law's ... 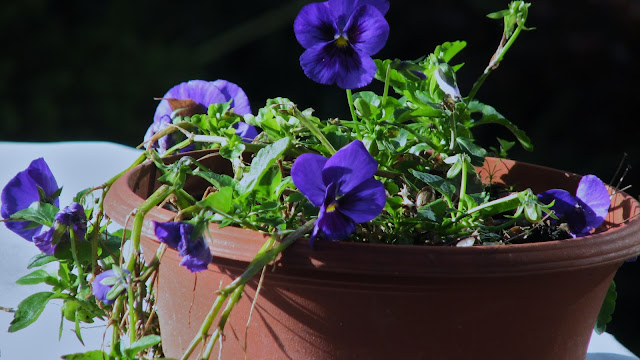 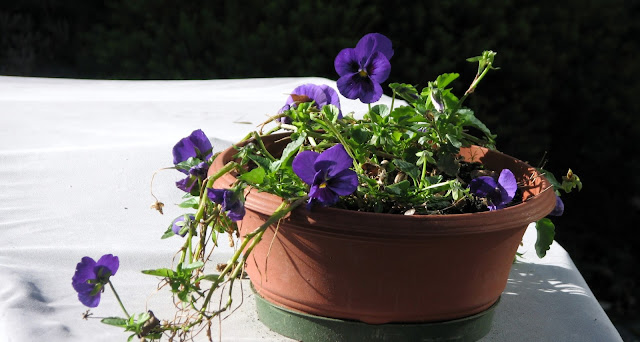 Pansies are for thoughts  ... A play on the French for the word thought 'pensee' - normally with an acute over the first 'e' to help with pronunciation; but I can't do an acute on this keyboard. (My keyboard isn't cute enough?) It is also, I guess, where the English word 'pensive' comes from.

Thinking of thoughts, my thoughts often stray to past times. In this mood I went back to my first posts on this blog to read what I had written nine years ago. Yes, nine years!

Written March 23rd, 2006
'What is it about mid-day that confuses me? I often get times wrong around noon ... I had arranged to meet my daughter today at 12.45 and turned up at 11.45. Maybe it's going back to 'real' time from daylight saving time, that has confused me.
Because I was an hour early, I decided to buy a coffee, plant myself at a table and do a bit of writing. I used to do this quite a bit two years ago, enjoying the experience of writing in the midst of a busy downtown cafe. However today it didn't seem as much fun anymore. I wrote a little bit, but everyone else in the restaurant appeared to be particularly loud and annoying, so I ended up just going back to my car where it was parked at my daughter's flat, and reading the newspaper until she turned up.
I ended up having my granddaughter after school, which was an unplanned but pleasant surprise. One of the things we did, was walk around the university. I showed her the Leith, which is a stream that runs through the university grounds.
We saw three supermarket trolleys lying in the stream. She was very puzzled as to why the students would think it a good idea to do such a dumb thing as tip supermarket trolleys into the Leith. I must say I had a hard time trying to explain. It's a tradition was the best I could come up with. To her, teenagers and young adults are a very scary, very weird breed. Except her uncles - she likes her teenage uncles, and this helps her to understand the species a little more.
The Leith's official name is Water of Leith which is certainly a grand name for such a little body of water. Granddaughter wasn't impressed by the coke bottle and other bits of rubbish she saw in the stream. There is nothing quite as righteous as an eight year old! However, she does have a point. Righteous indignation often does.
She was a little nervous of all the students walking past. "They'll look at me and think I'm a brat," she said. As it was just on five p.m. I told her the students weren't even noticing her, that they were all heading home and that probably all that was on their minds was food - pies, chips and two-minute noodles.
On the way back to my place we stopped at a supermarket to buy some spag. bol. sauce for dinner. After paying for my purchases, I thought I had lost her. I couldn't see her anywhere. That was a scary moment; how was I going to explain this to her mother? But she had decided to wait for me just a little to the side of where I was expecting her to be. She was playing on a miniature hand-held game. "I carry this everywhere with me so that when I have to wait for someone, I've got something to do," she said nonchalantly, completely oblivious to my panic and terror'.

(It was interesting to read this knowing that my granddaughter is now seventeen. I remember the day well, but even so, much had disappeared from my memory. Just like a photo, what I had written brought a lot of it back).
- June 10, 2015