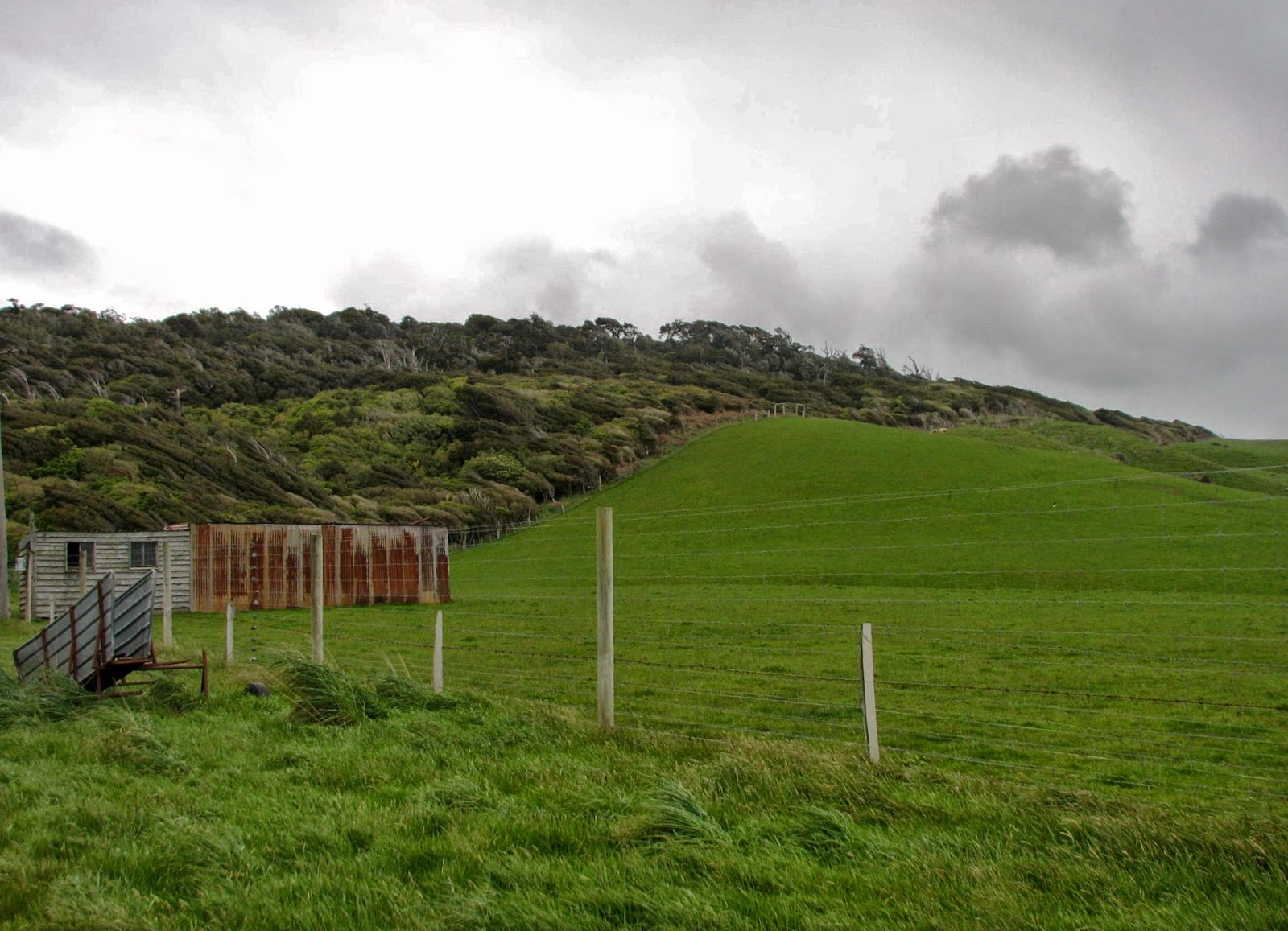 Gaba Tepe hill, situated at the foot of the Longwoods, Orepuki.

Gaba Tepe - or Kabatepe - is the name of the headland in Turkey that looks over the northern Aegean Sea on Gallipoli Peninsula. Gaba Tepe was the location of the Turkish artillery battery defending their land from New Zealand and Australian (ANZAC) troops, who landed on the peninsula beaches in April, 1915 and suffered huge losses. Two of my great-uncles were killed in World War One. My Nana's brother Joe was killed at Gallipoli in 1915 and her older brother, Alf, was killed in Sommes in 1918.

As a child playing with my friend who lived across the road from this Orepuki landmark, I thought the hill was called 'Gabbatippy'. We would play roly-poly down its soft, green slopes, completely unaware of the event it was named after. 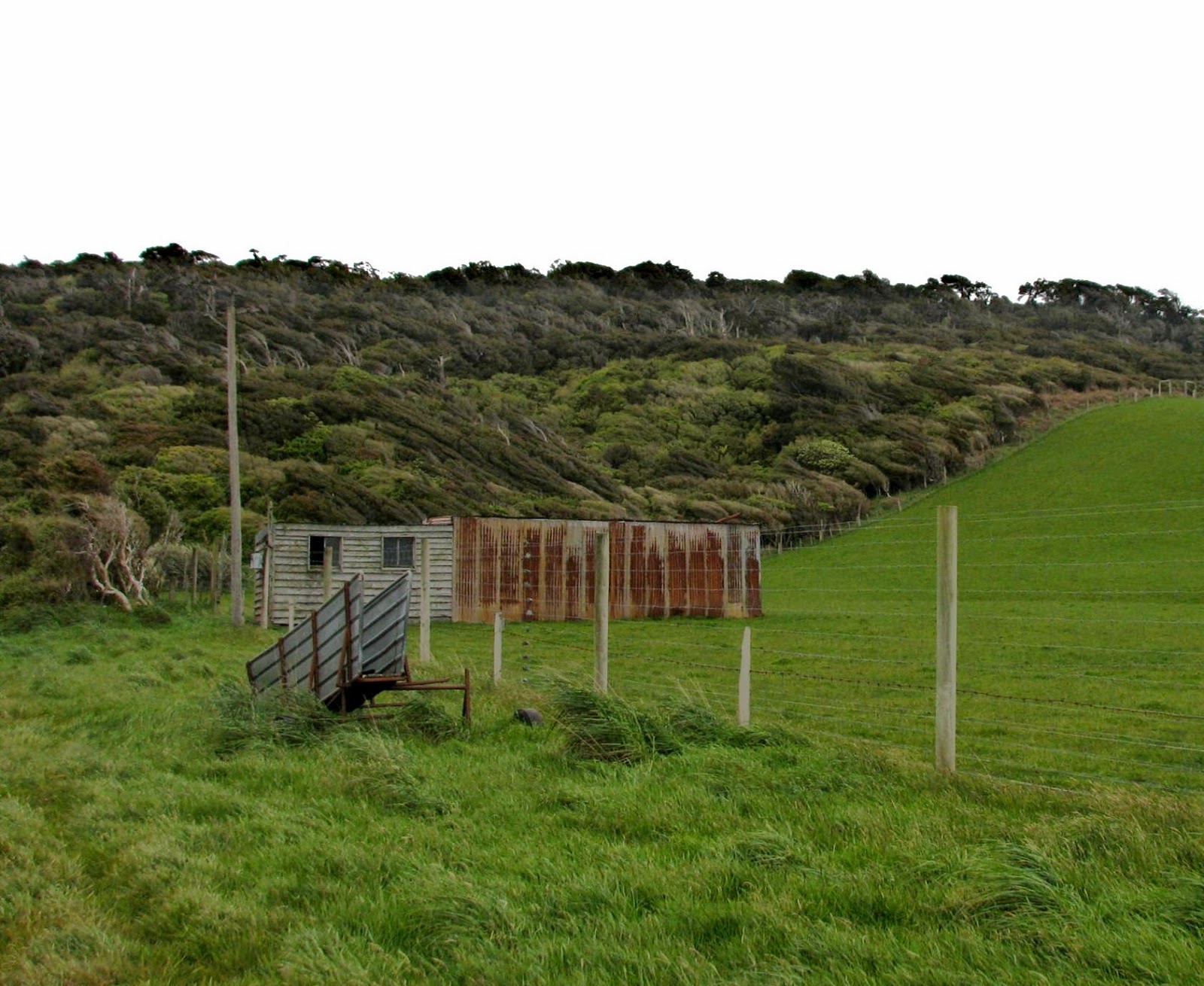 This weekend we went down to Orepuki (a regular event for me) and while we were there, went on a bit of a tour with my cousin (who has spent most of her life in Orepuki). She filled in the gaps of my knowledge and memory. My family left there when I was ten years old, so my memory only goes so far. She would point to an old house, or a space with a cabbage tree; or sometimes merely a depression on the ground; and say, "That's where .... lived. And that's where ... lived". So many houses gone from this once thriving rural Southland town. Including the house where I used to live. 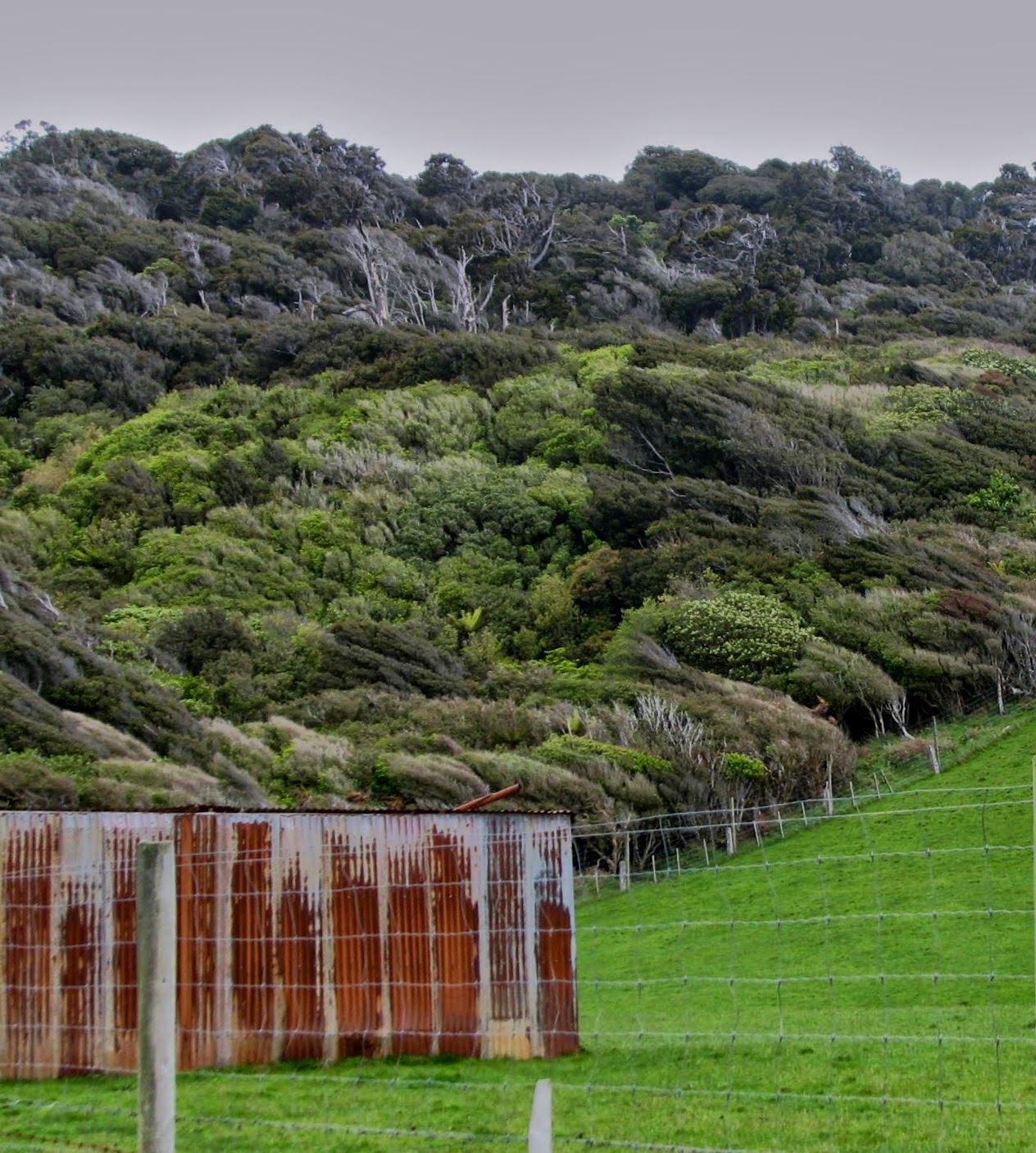 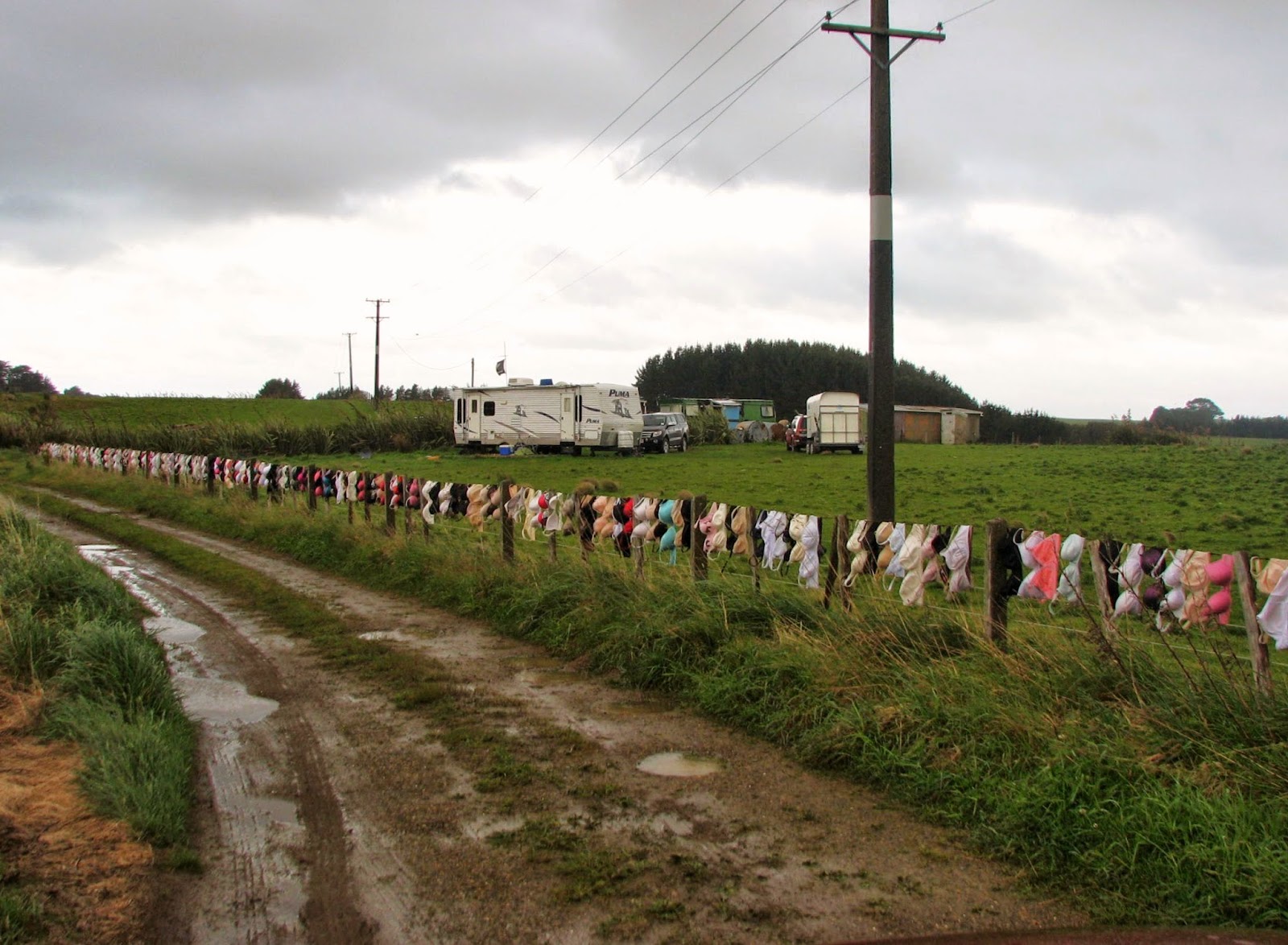 And now for something completely different. Bra-fence! A hand-painted sign announces it as, 'Tim's Tit Stop'. 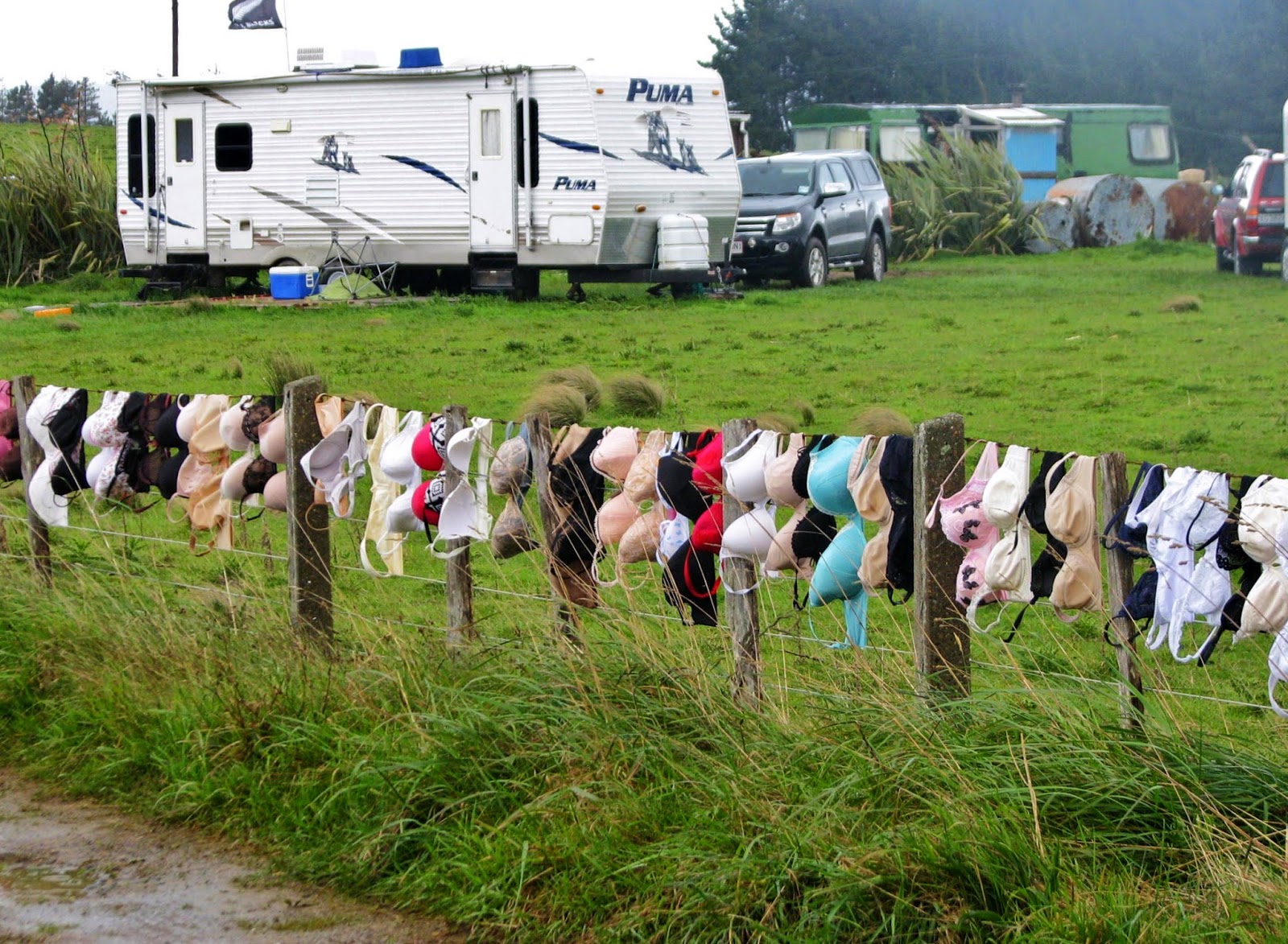 New Zealanders (or should I say, some New Zealanders - I'm not sure what I think about them) love a quirky fence - especially if it is situated somewhere along the tourist trail. There are toothbrush fences, bike fences, sneaker fences ... the Cardrona Bra-Fence is the most famous one, but this was dis-established due to road safety concerns. Maybe this bra fence here on Highway 99 is setting itself up to become the next Cardrona? 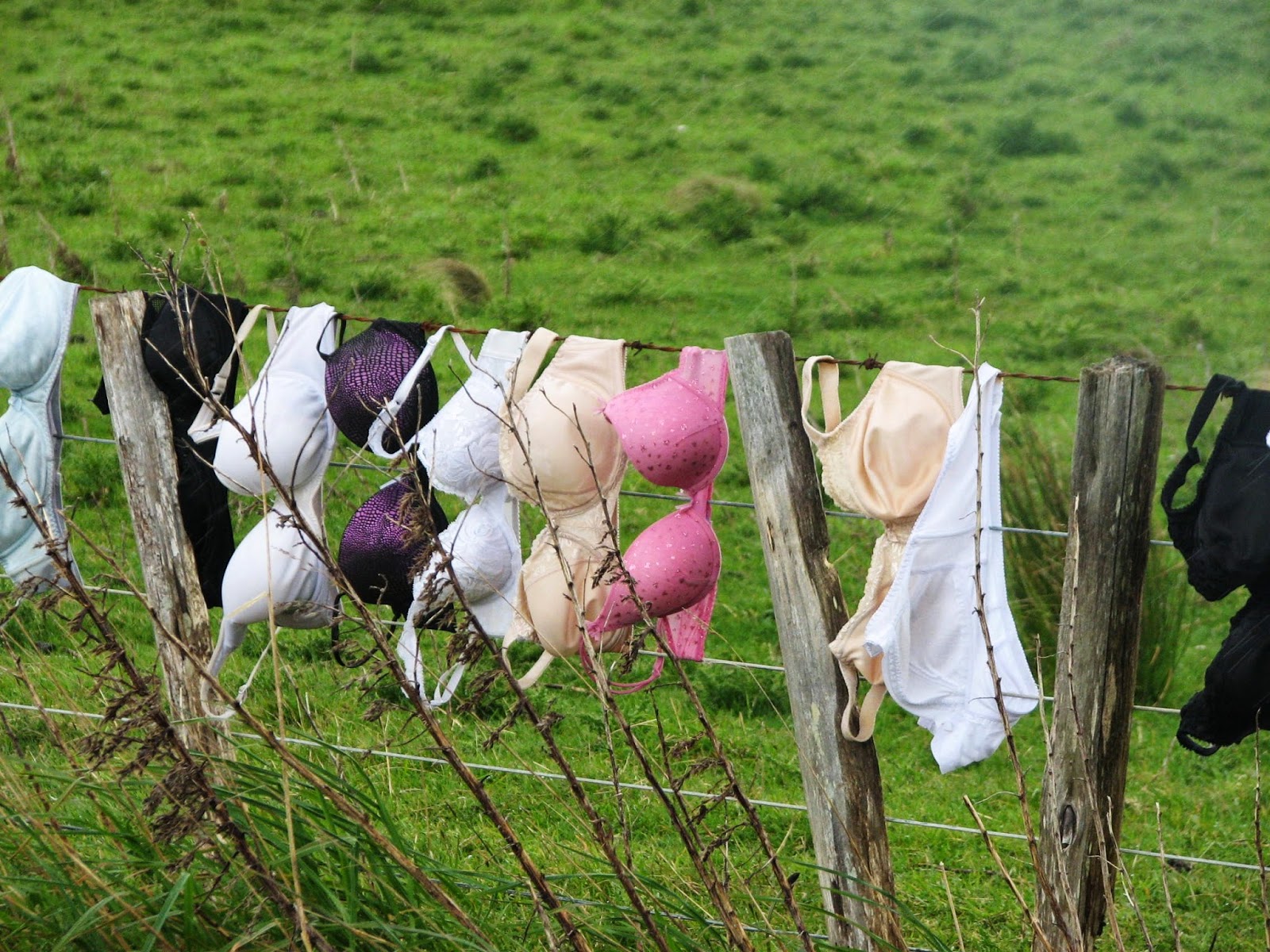 Look out for the bra-fence if you are on the road between Colac Bay and Orepuki. Or not. (I reckon they must be fastened to the fence pretty tightly to be able to remain intact through the south coast's regular gale-force winds!)
- November 17, 2014