By the Side of the Road 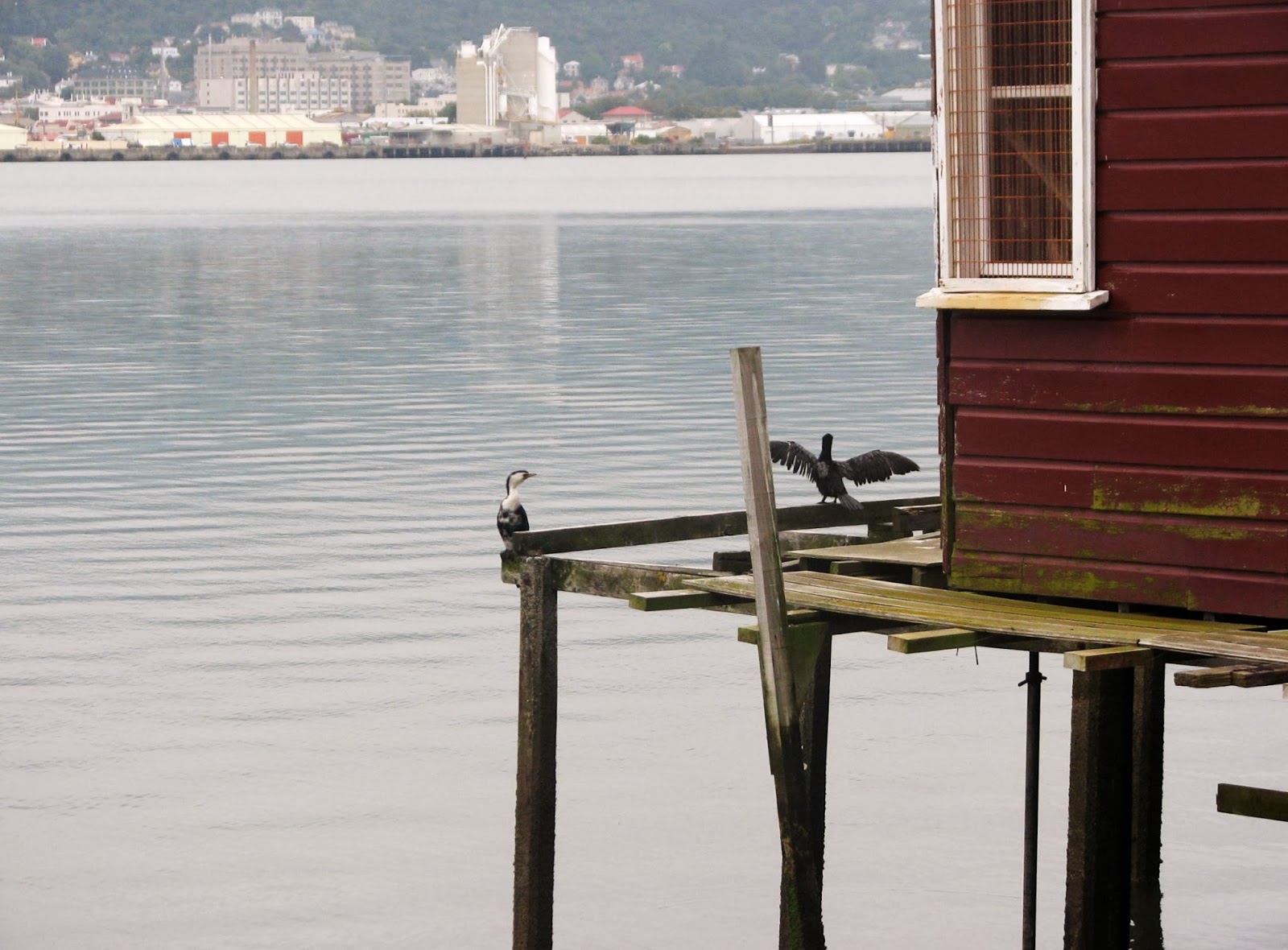 After taking this photo, I became aware of a well-dressed, elderly man standing on the side of the road. He remarked, almost peevishly I thought, "I'm a rare bird." Maybe he thought I should take his photo too. I laughed and walked on. (Although I had to agree with his self-description - you don't see many 70-year olds on the side of a road with their thumb out, hitching a ride home). 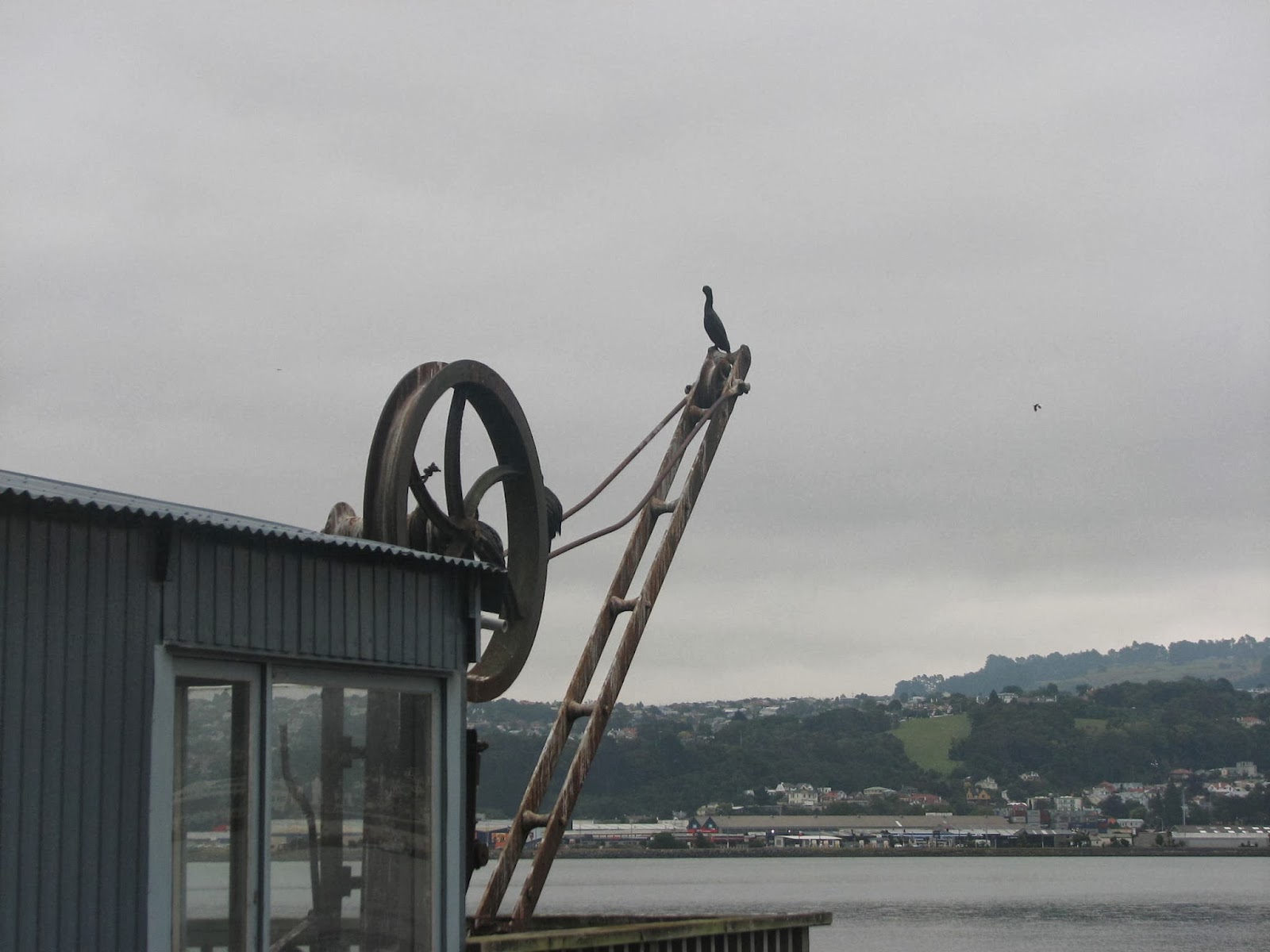 There seemed to be a theme to my walk - perched birds bordered by a dreamy-grey and distant city-scape. 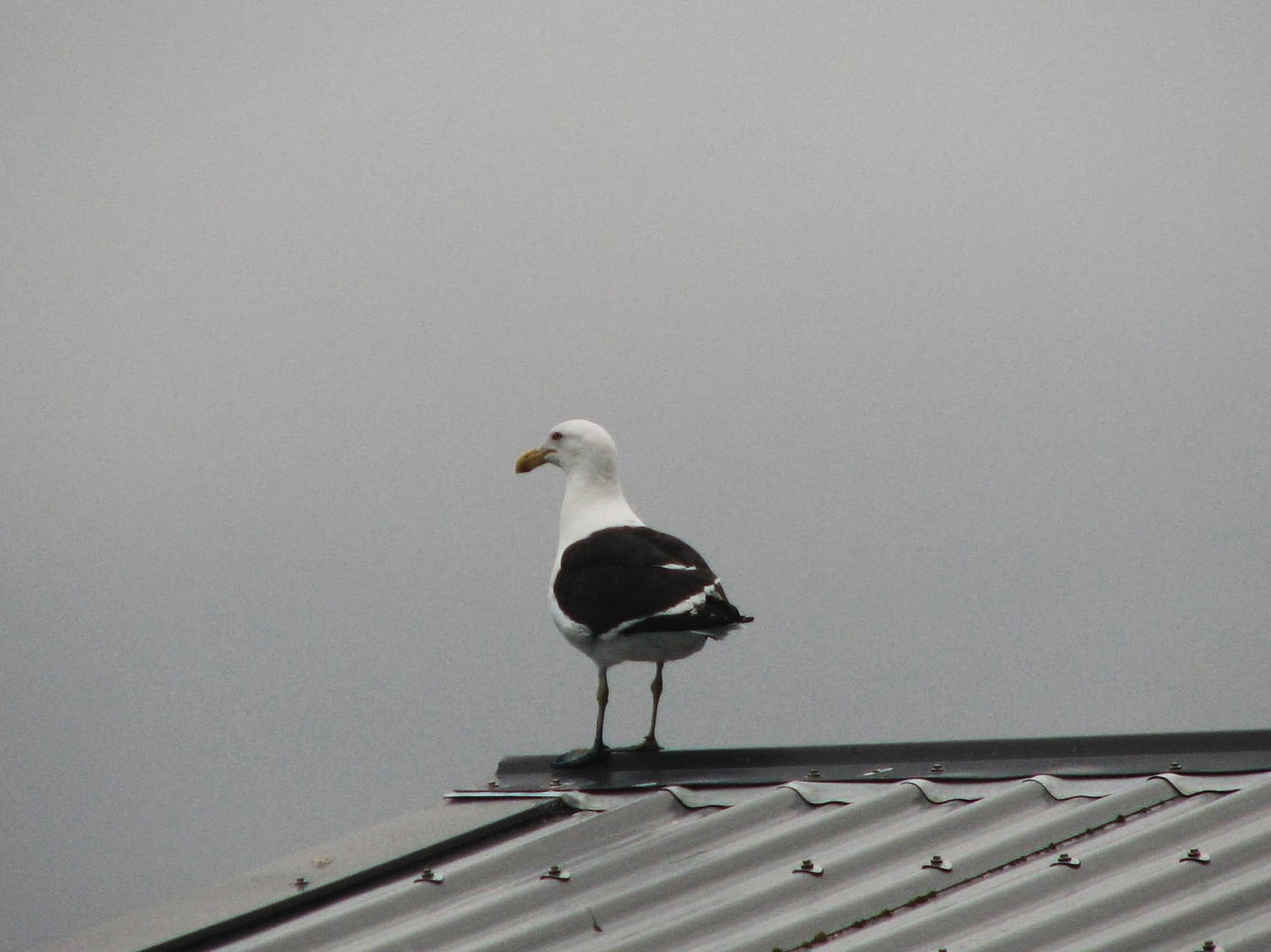 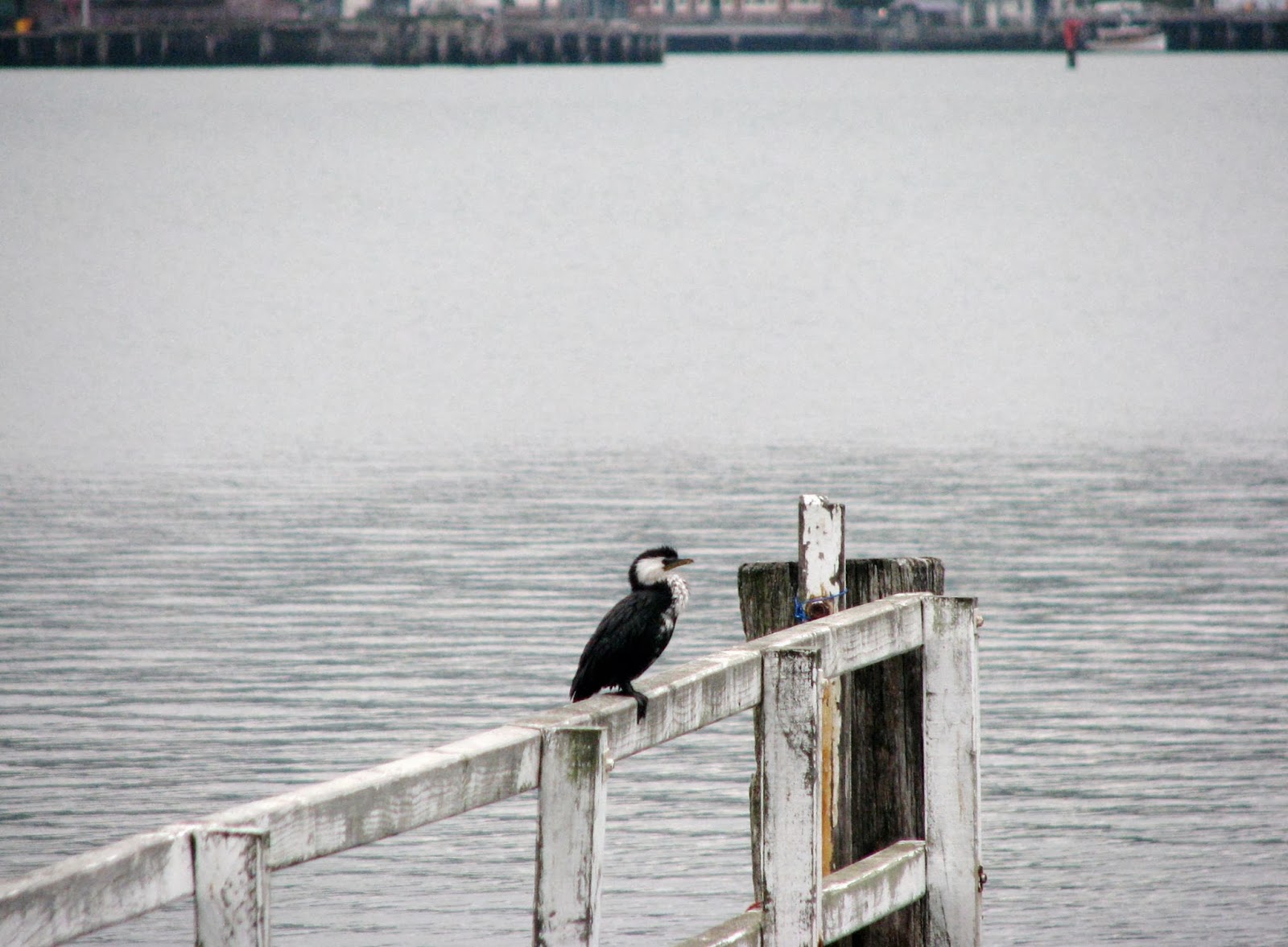 The architecture of wooden railings, posts, rooves and machinery, also became a feature; solid forms pressing and impressing against a soft background of mist.

Resting birds,
skeletal forms inside a frame
of feathers,
as strong as they are fragile,
as light as the low cloud
they swim through. 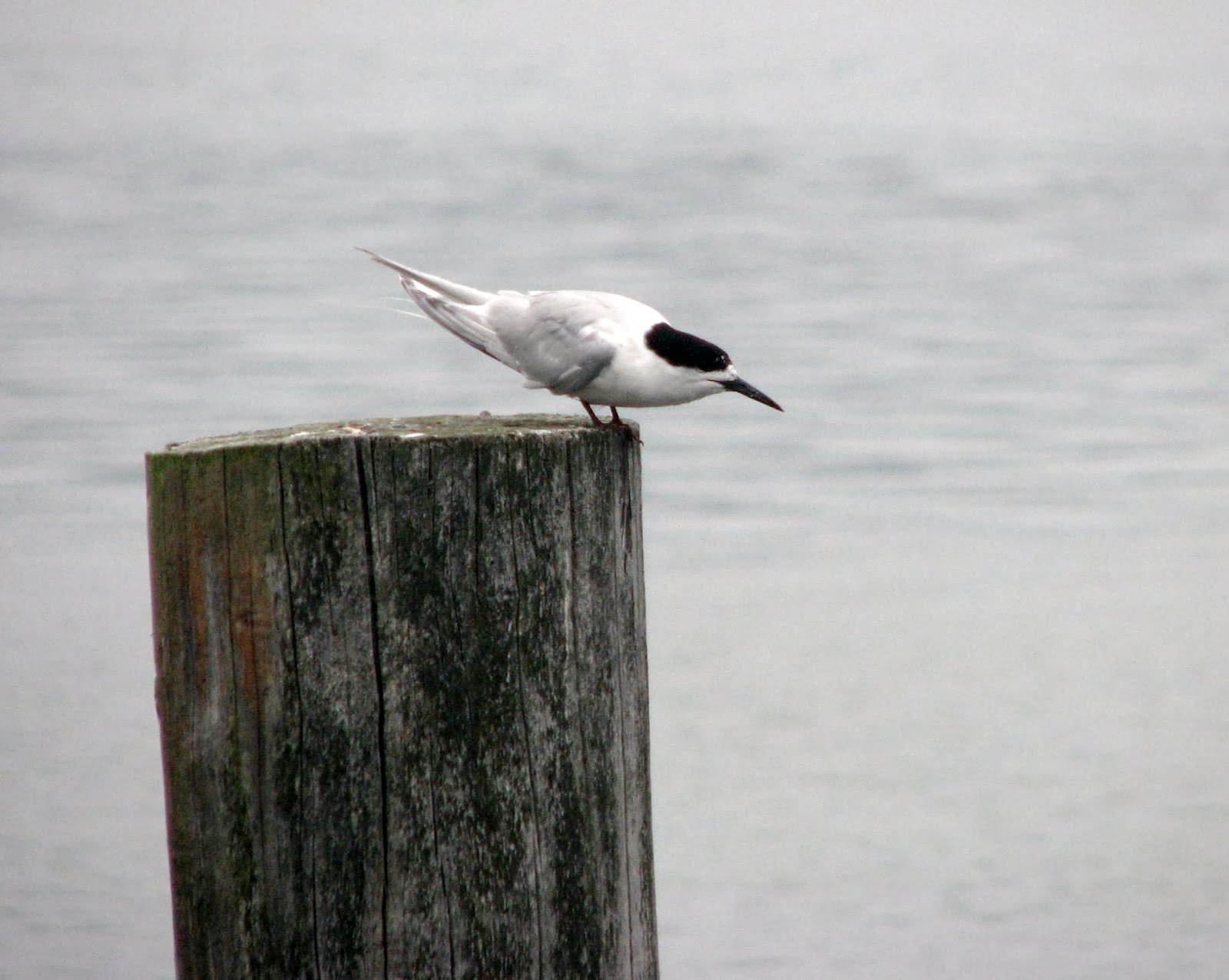 With the patience of a fisher, this tern waited and watched for its chance to dive for food. 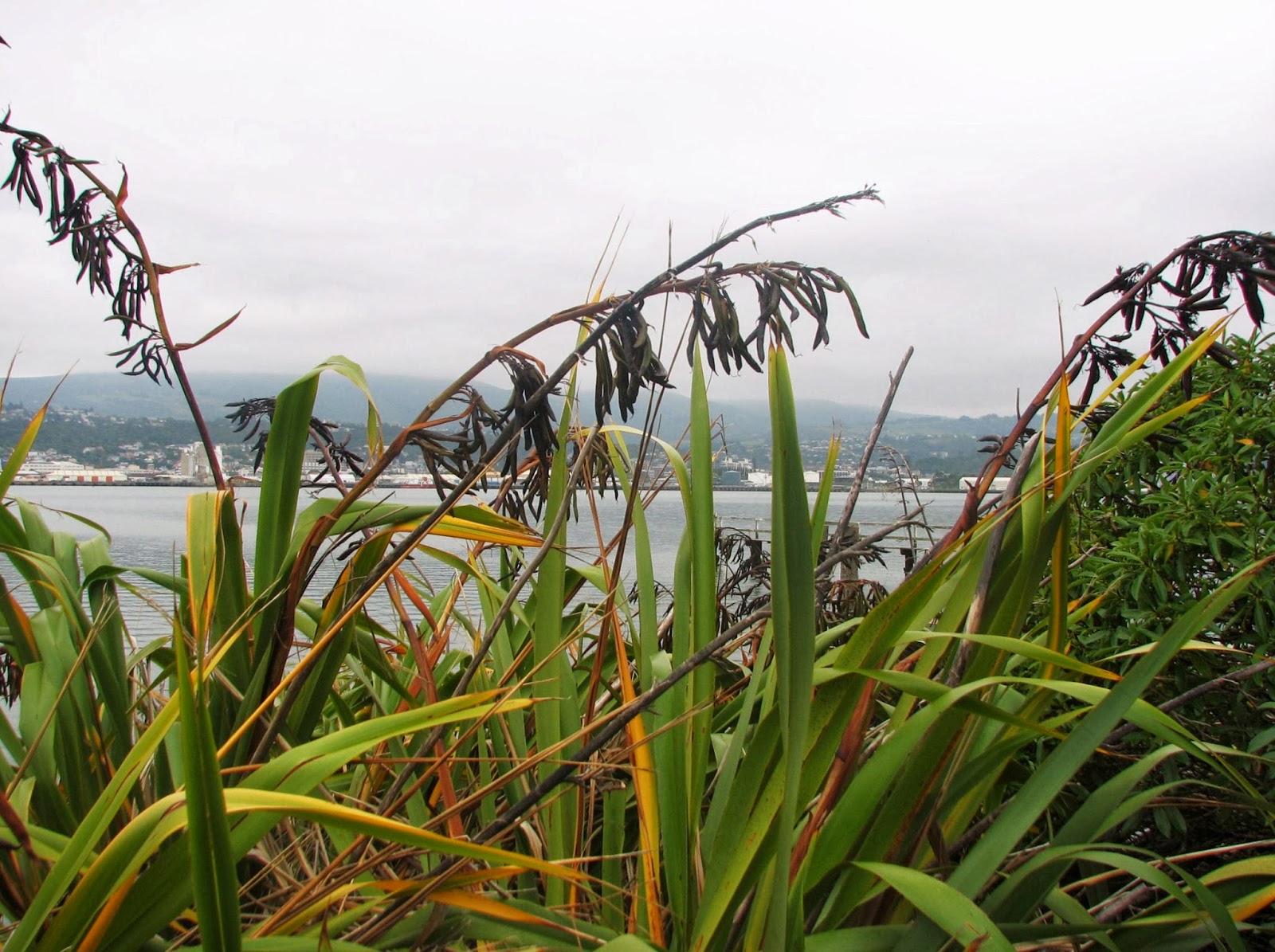 At this time of the year, the flowering shoots and pods of flax (harakeke) are strong and vital, with a dark-red hue. By the middle of winter the fronds will have hardened into brittle black, the stalks dry and grey. 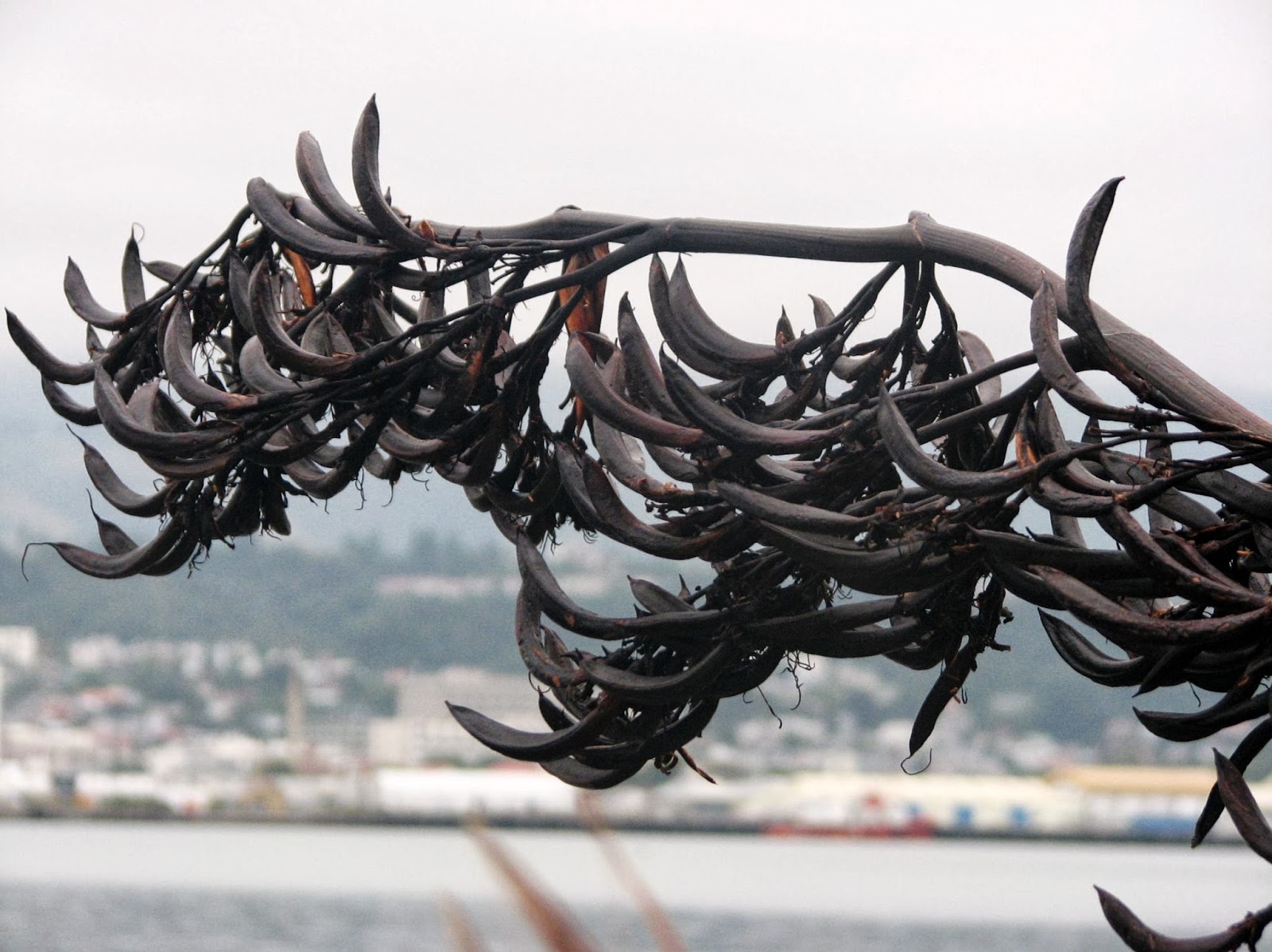 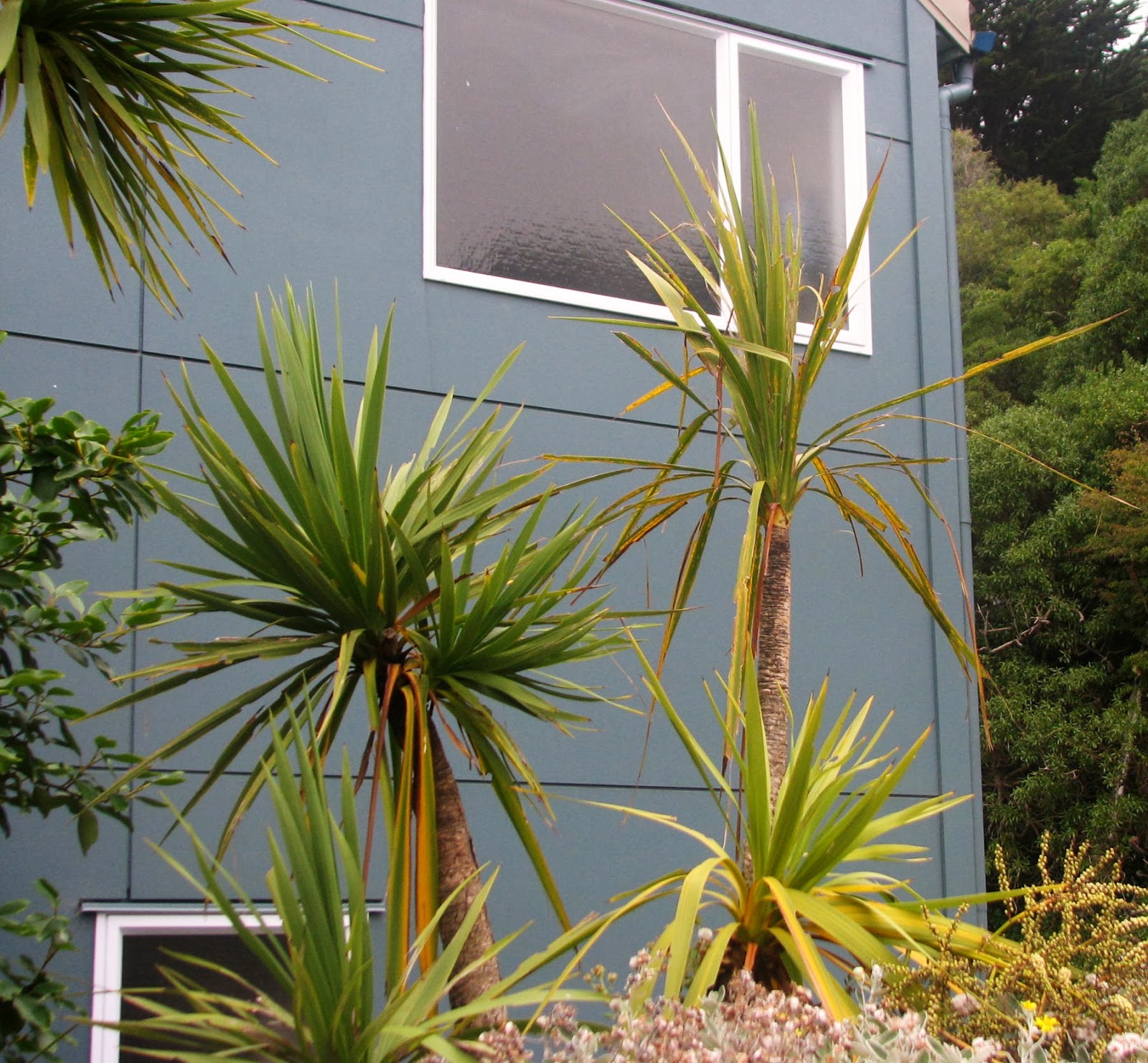 My eyes are often drawn to how the shape of the cabbage tree (kouka) appears to inform and / or enhance the style of New Zealand's architecture. 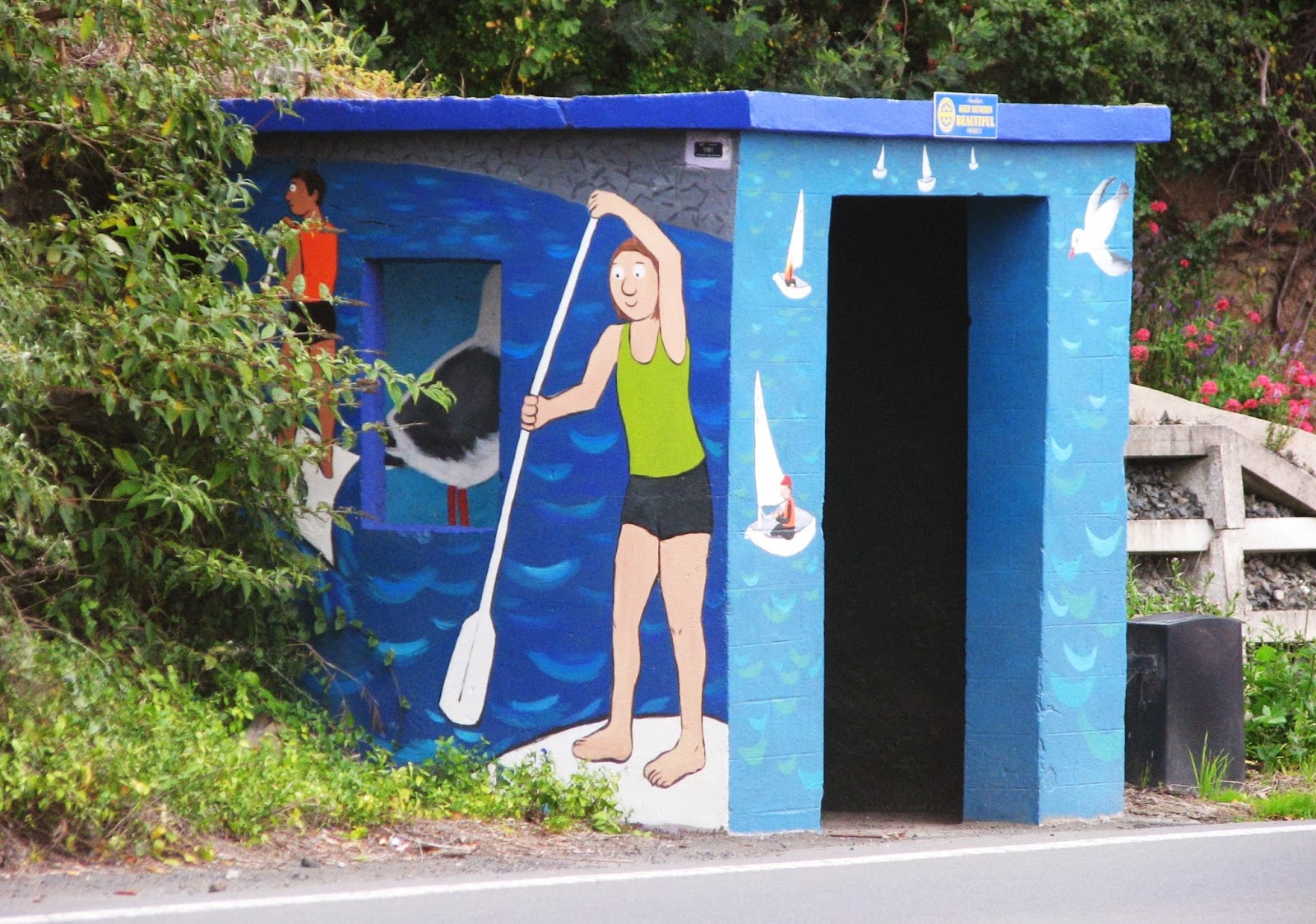 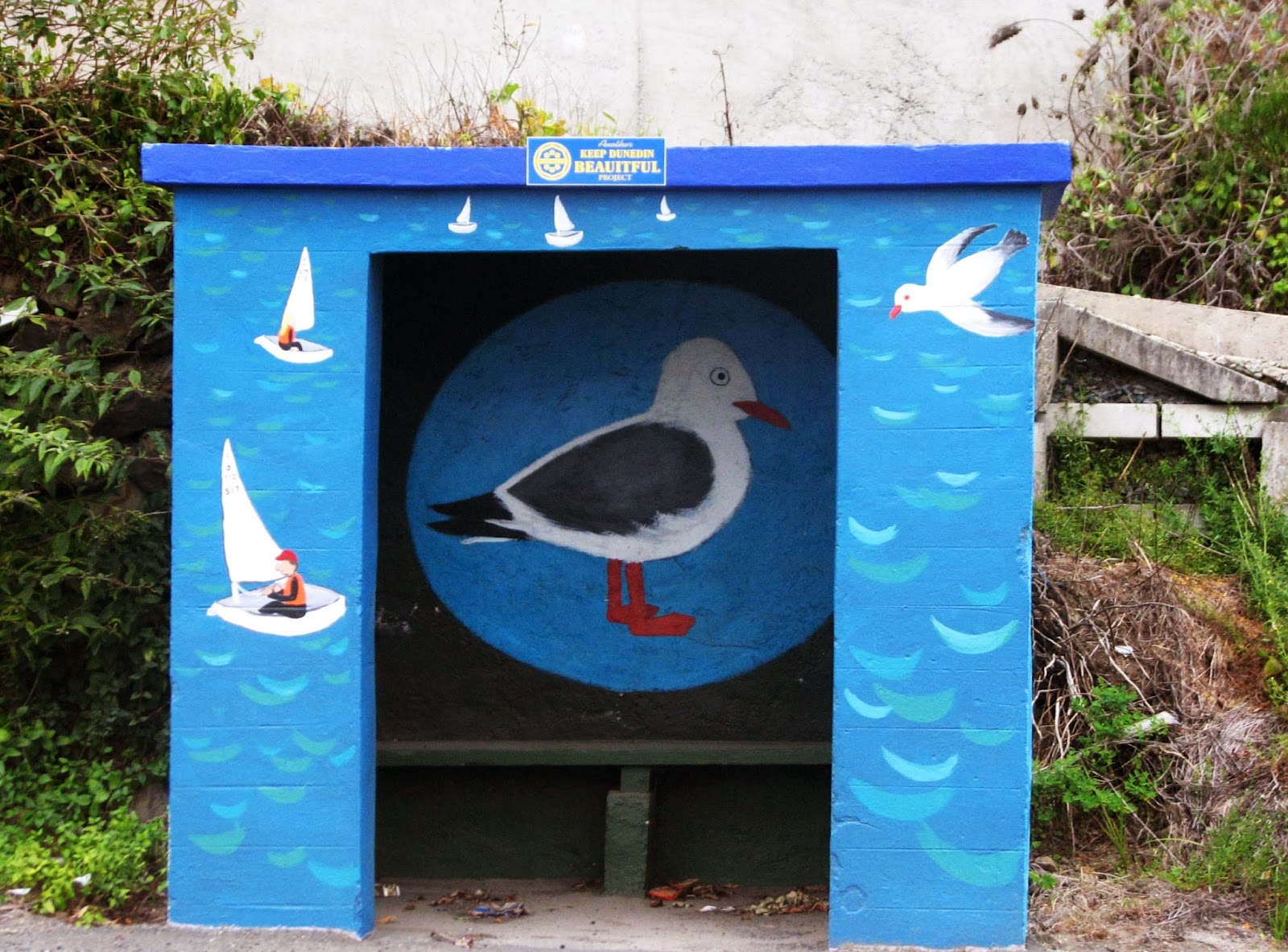 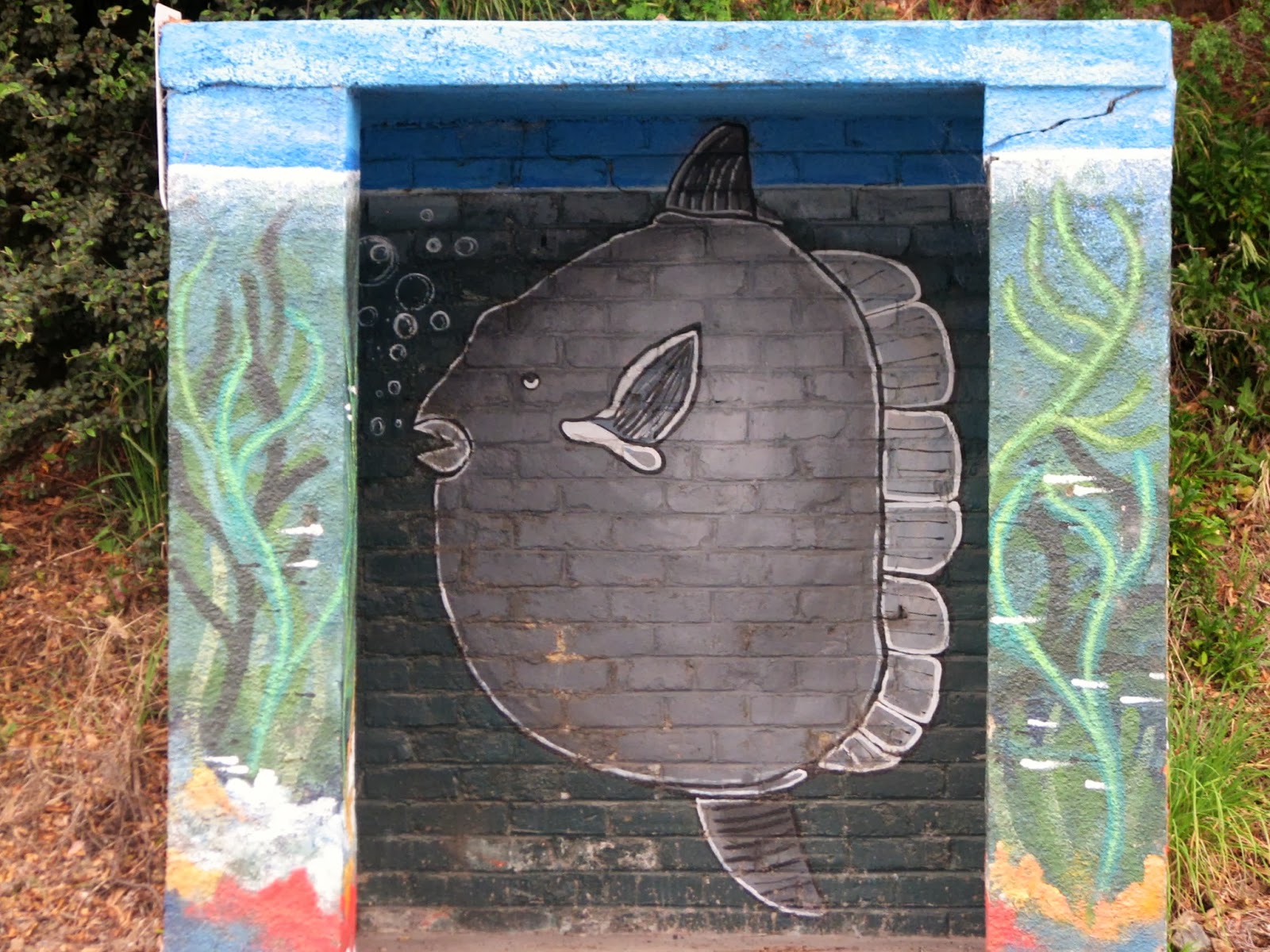 This is a favourite of mine. I am hoping that this bus-stop gets a re-touch rather than painted over with a different scene. I am rather fond of Moonfish.
- February 11, 2014

Your images are so peaceful Kay.

Your combinations of words and photography are always beautiful and moving. I can't help but wish you had snapped a shot of that first "rare bird" I bet he had tons of character in his old bones. ;) Thank you for sharing. xx

A - Thanks so much - it is peaceful when there's no pesky wind and there wasn't a breath when I went on this early evening walk by the harbour.

Dona - I know! I wasn't quick enough - as I walked away I realised I should have traken his photo. He got picked up as I moved away, so a missed opportunity.

I love your photos. They make me feel so calm. Greetings from Queenstown, New Zealand.

Hi Michelle! Loved visiting your blog and your gorgeous photos of Queenstown - where I was again this weekend as well. :) Thanks for your visit and your kind comment.