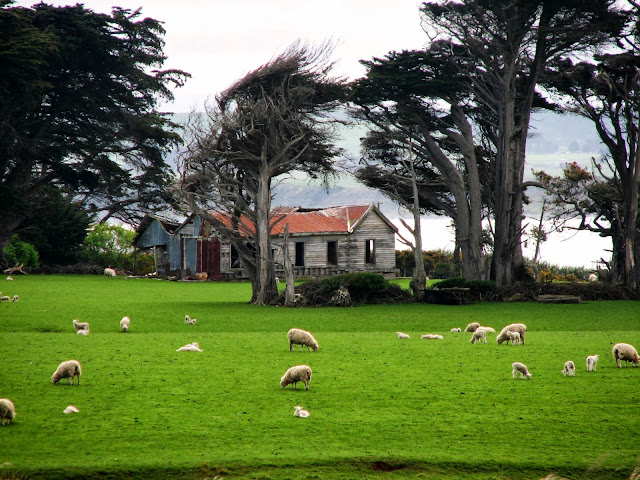 How appropriate that on this trip back to our old hometown,  the first glimpse we got was of  where - in one sense - it all started for us.

The old house overlooking Te Waewae Bay,  is what remains of York House, where Henry Hirst (our great-great-grandfather on my mother's side) from Huddersfield, Yorkshire, settled. He named the place, 'Hirstfield', but it eventually became known as Orepuki after the land he'd bought was sold to the govt. when gold was discovered there. 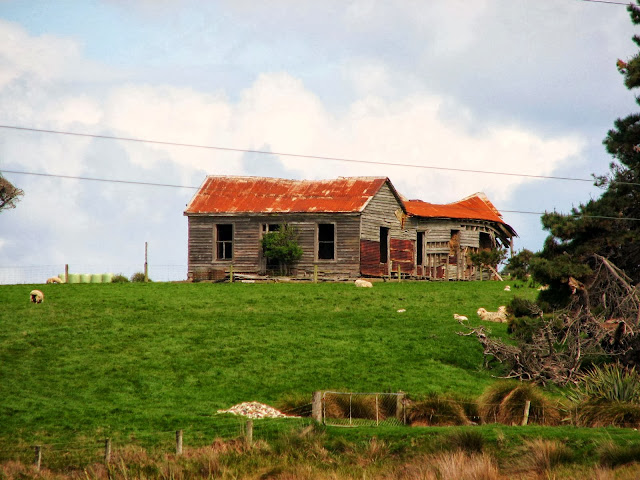 Unless saved, it won't be long until this once-grand house, built in the late 1860's, falls and is lost. 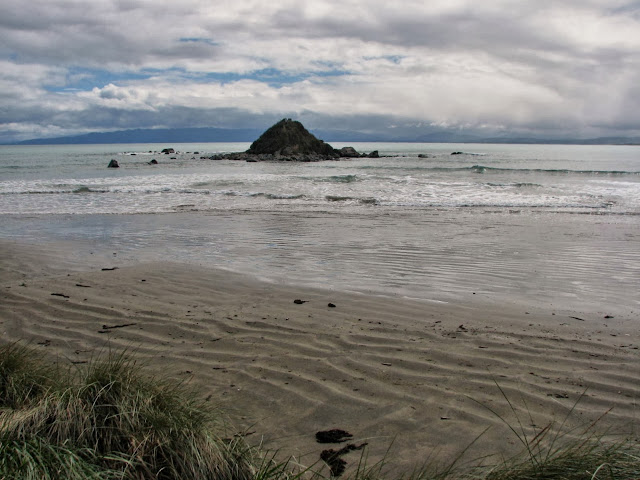 Te Puka o Takitimu (The Anchor Stone of the canoe Takitimu) or Monkey Island (as it is more commonly known).

In our family there is a tradition of taking all prospective (or already-landed) in-laws to see Monkey Island. Without fail they say, "You call that an island?" Or "Is that all it is?" But we don't care; they have been introduced to the family touchstone.(Even though I notice in the signage, it is referred to as a 'knob'!) 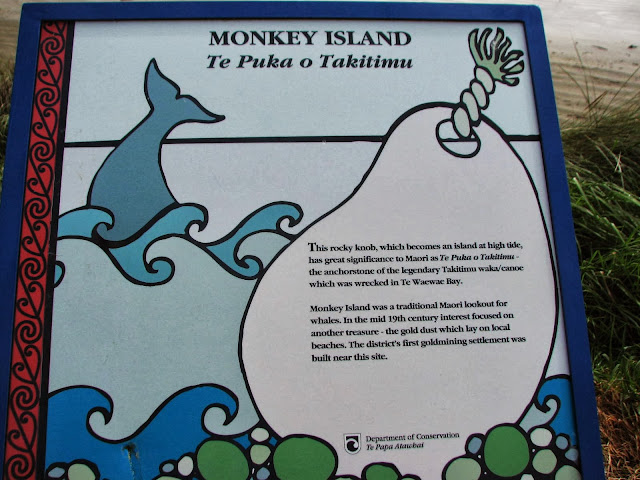 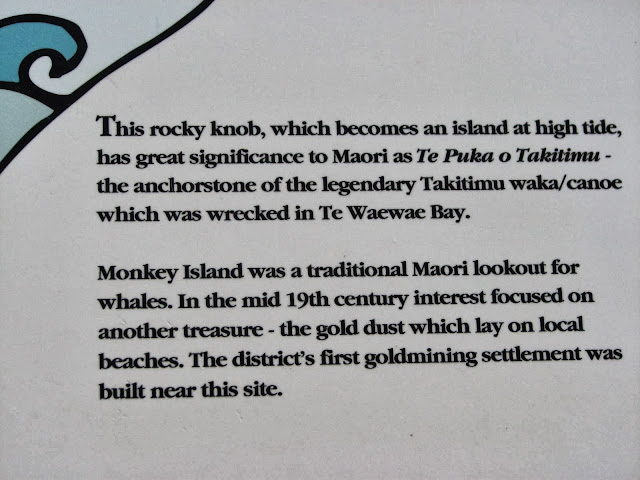 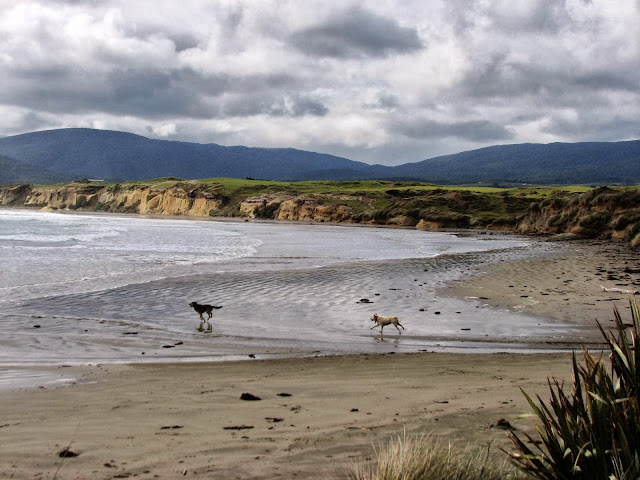 I said to my sister, "Remember as kids down here on the beach eating mussels Dad and friends cooked in a tin billy over an open fire? "
She didn't seem to remember.
Another memory is of two of our uncles walking out into the ocean at sunset, a flounder net suspended between them. Yes, they did come back! However, I don't remember whether or not they'd caught any flounder. 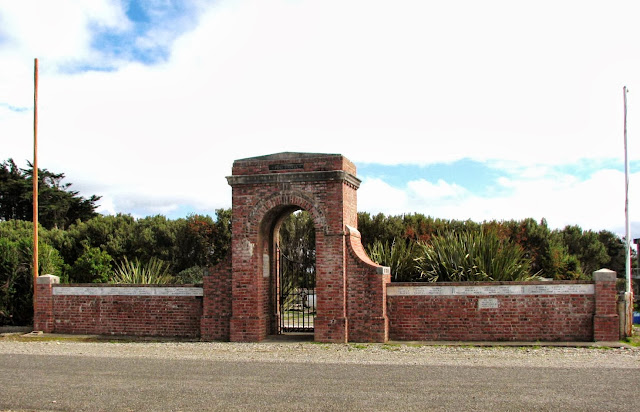 Memorial Gates; the old school gates and Orepuki's War memorial
.
From the beach we travelled into the town of Orepuki itself. On every return trip over the fifty years since we left, we have seen Orepuki dwindle from a busy town to just a shadow of itself. The closing of the school seemed like the final blow. 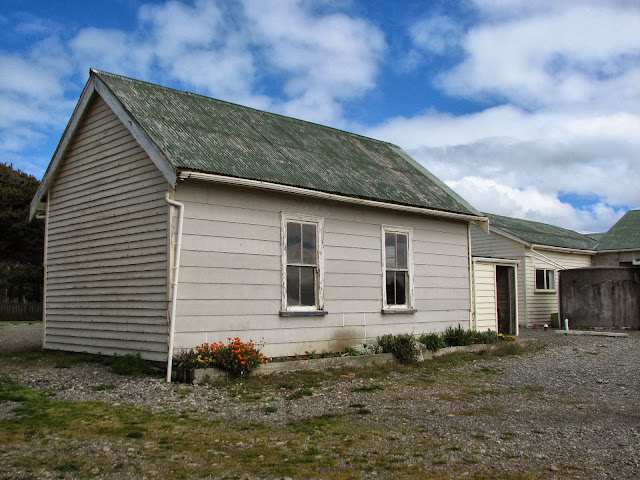 On my father's side of the family, the family of Reid's arrived in Orepuki from Dunedin (having emigrated over from Derry, Northern Ireland, three years before that). They set up a boarding house in Orepuki. The site where the boarding house was, is still obvious but I'm not sure if any of the original building is still intact. (Photo above is of what is on the site, but we couldn't be sure if it's part of the boarding house or not.) 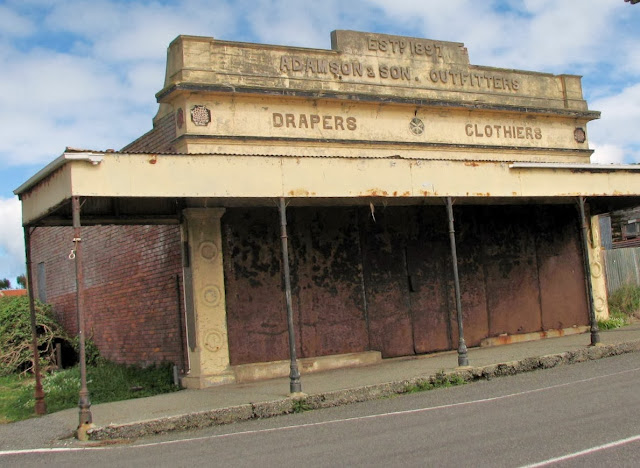 as you can see by the name, this shop was originally Adamson's (one of whom became the mayor of Invercargill) However, in my day (1960's) this was MacDonald's Draper Shop

A favourite shop of mine. On the right side as you went in, was where Mrs MacDonald served, with shelves full of rolls of materials, balls of wool, buttons, scissors, needles and everything associated with making clothes, spilling into toys and clothes the farther down the shop you went. On the left side was where Mr MacDonald served, with books, magazines (including 'Sunny Stories') comics and everything associated with stationery, eventually spilling into hardware and footwear, the farther down the shop you went.
It was a shop full of the delicious smells of new goods - linen, nylon, wool, cotton, crayons, books, ink, sellotape, brown paper and string, dolls, shiny, black gumboots, leather, wicker and plastic ... 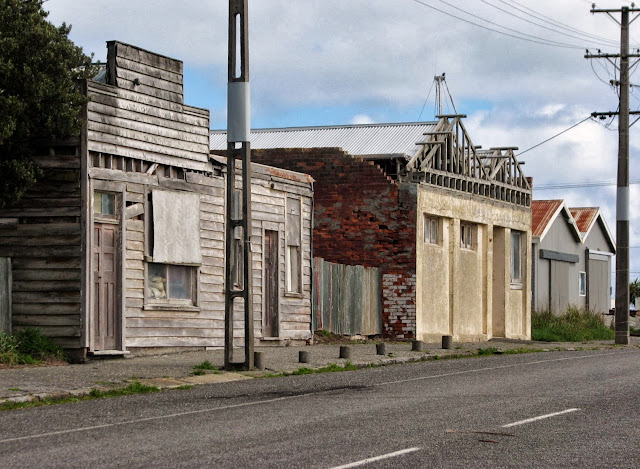 Hard to imagine this street alive with life and business. I picture myself here in 1962, riding my bike, off to Phyllis Popham's Dairy to get a 'thrup'ny' mixture from the threepenny tray. 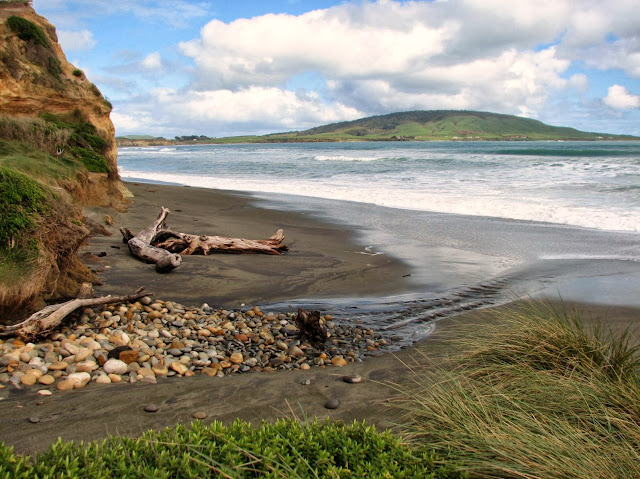 From the town, we drove to Gemstone Beach which is at the opposite arm of  Te Waewae Bay to Monkey Island. 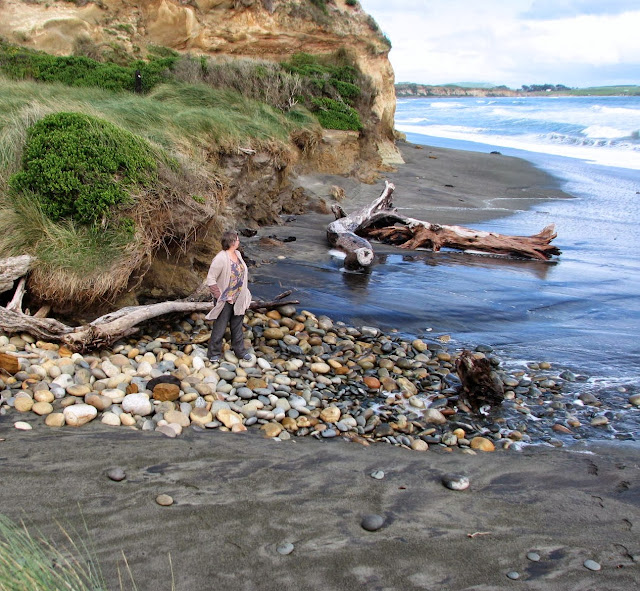 Agates, garnets and quartz are found here. Also it is possible to find sapphires (if you are very lucky). The stones are washed in here from rivers /streams that flow into the sea from the Livingstone Mountains, located to the west.

When we were there the tide was coming in, so we didn't have much luck with finding the colourful stones.

However, I already have here at home in Dunedin (approx. two hundred kilometres away from Orepuki) two concrete steps embedded with Orepuki gemstones. 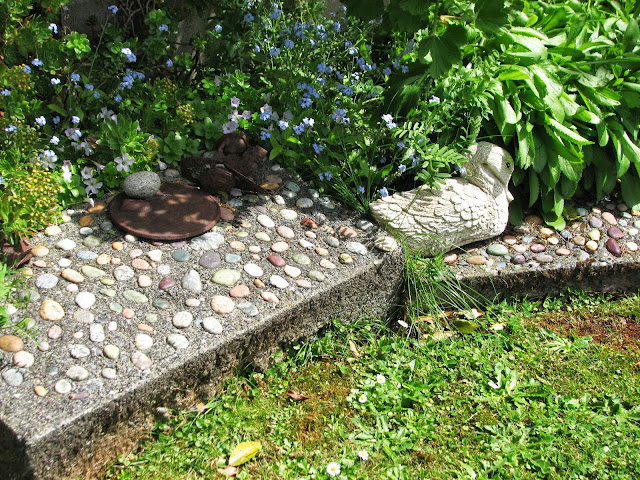 They are my late father's handiwork. I won't go into it again, as I am sure I have already posted about rescuing these steps from our old house, then with the help of a host of relatives, eventually succeeding in getting them into our garden. 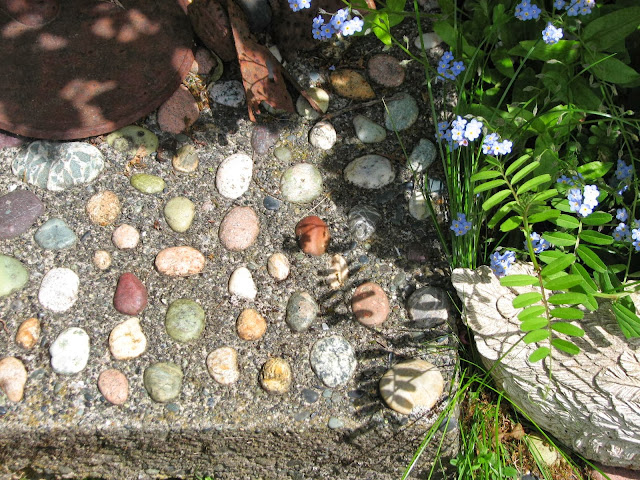 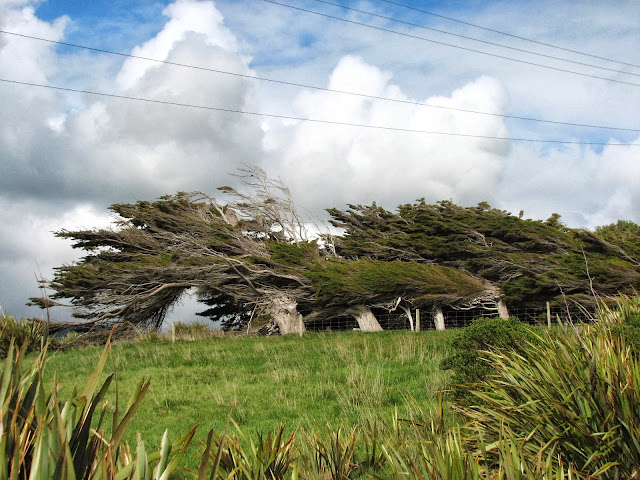 With the boot of my sister's car laden down with smooth boulders and stones, we headed into town to check up on the local goss to be heard in the pub.  On the way, we passed a stand of trees very familiar from childhood - still surviving the salt-laden winds battering them into their crooked leanings.

At the pub we caught up with how there are plans afoot  (indeed, in progress) to refurbish the pub with a Garden Bar and accommodation. The publican, Alastair ? McCracken, was full of positive energy and said that with the support and focus of a strong local committee, Orepuki is looking up and new life is being breathed into the place. It is a popular place to visit, and not uncommon for the Orepuki Tavern to cook a huindred meals on a Saturday. 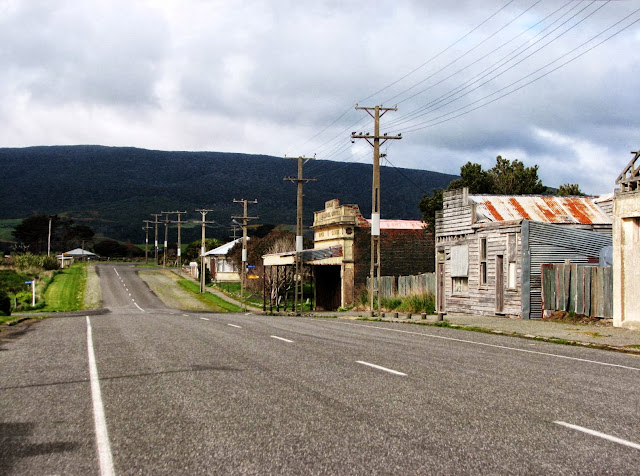 And so once again, we bid our turangawaewae; our 'Puki; E noho rā: Goodbye; Ka kite anō: See you again.

Beautiful photos. I really love the old house & hope it gets "saved".

Tara - Thanks, it's a great place.