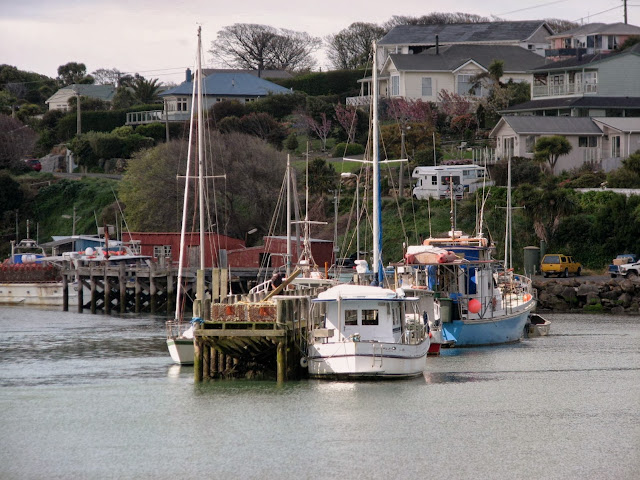 On a recent trip south with my sister, following an inbuilt compass, we pointed our noses towards locations held dear since childhood.
With our 81-year old auntie and one of her friends on board, we headed for the south of the south coast of the South Island. 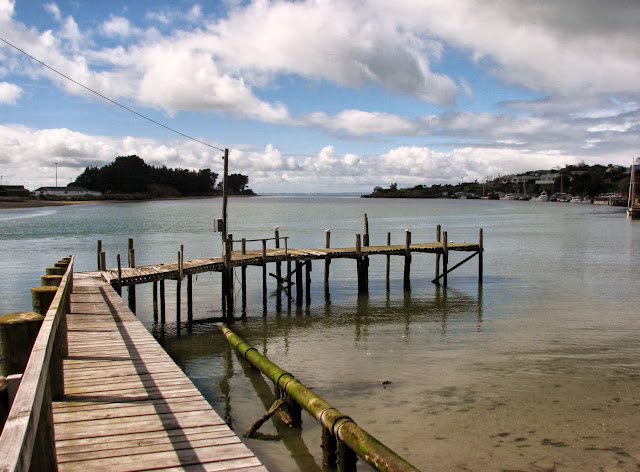 Riverton was where Mum and Dad sometimes used to buy us fish and chips. After buying the parcel, Dad would pull into a parking spot at the town end of the bridge. Here Mum would rip bits of newspaper off the huge newspaper bundle and hand them out for us to use as plates. Us six kids would then happily tuck into our share of chips and battered fish, the smell of the harbour mingling with the steam and salt. (Note to youngest sister Jill, in case you wondering why only six kids, not seven? As you were just a baby when we moved away from the district, you never participated until maybe later, on return trips).
In more recent years, I've indulged in a couple more fish and chip meals in Riverton. The fish is always super-fresh. Quite possibly, Riverton has the best fish and chips in New Zealand. 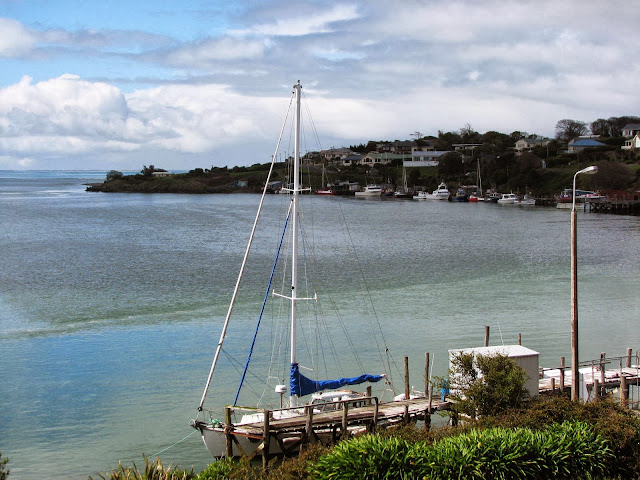 This is where the Aparima river joins the sea. Farther out from the point, beyond the bar, you can just detect the surf of the ocean where the fishing boats head out before returning with their catches later on in the day. 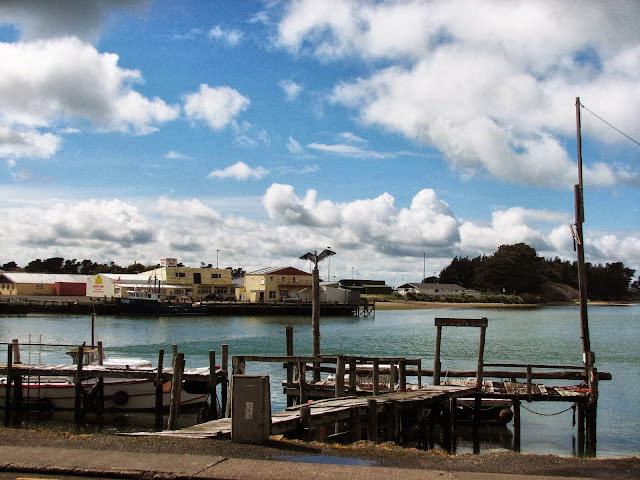 Riverton is a fishing village with a sense of pride in its location and in its history. It backs itself as a southern seaside resort. At one stage the locals promoted the town as 'The Riviera of the South' - perhaps taking it a little far. The climate is not really conducive to such a description. 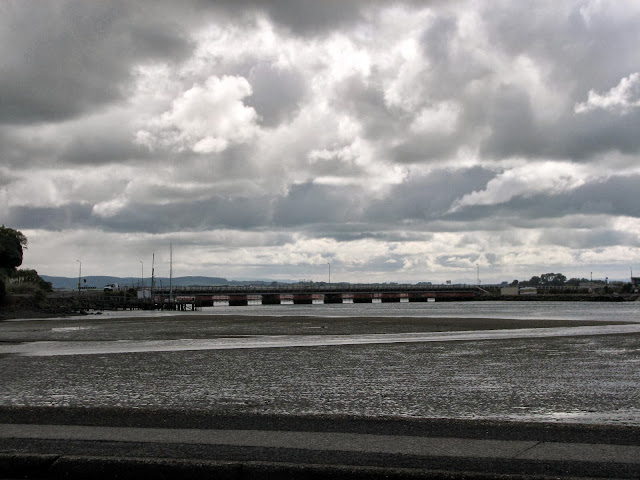 The Maori name for Riverton is Aparima and was a site of a large Maori pa (village).

Europeans named the whaling station they set up here, Jacobs River. Our ancestors, William Dallas (one of the original European settlers in Jacob's River) who was a Scottish seaman from the Isle of Islay, and his wife Makarita (Margaret) who was descended from Moitoitoi (Kati Mamoe), settled here. 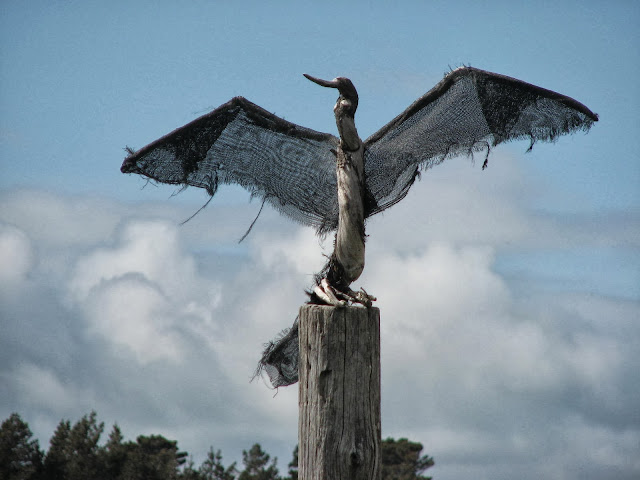 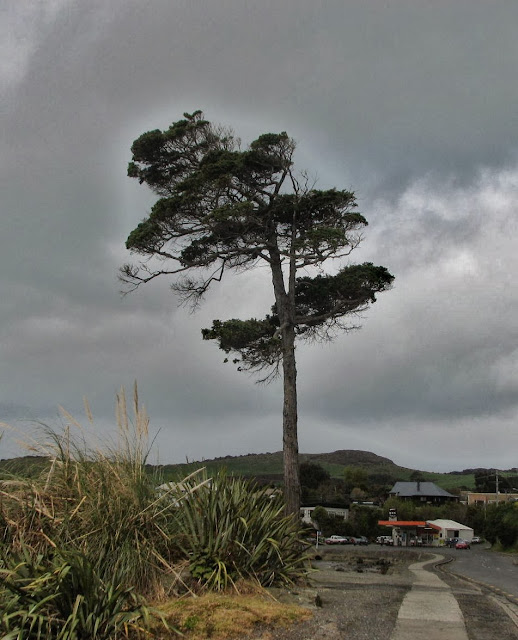 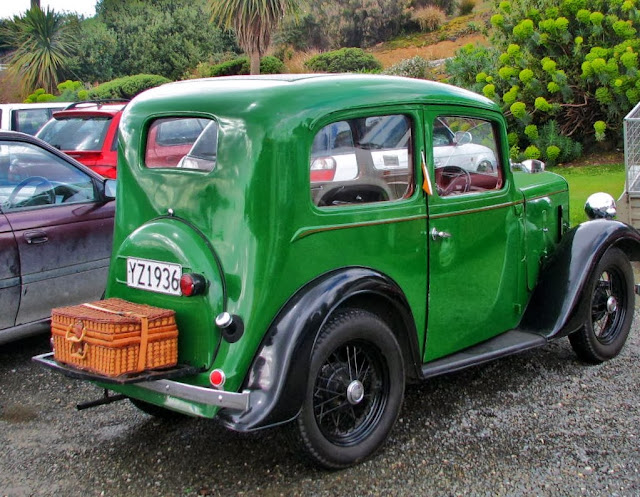 This would do me! 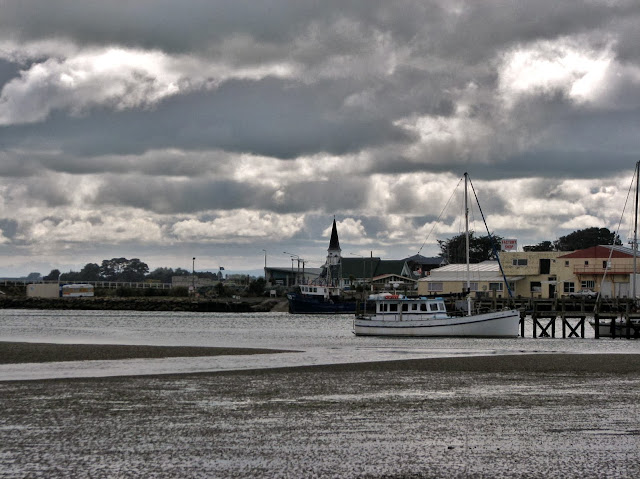 We left Aparima / Riverton with its moody skies and peaceful water scenes river-side of the sand bar, and headed for where we used to live as kids, farther round the coast.

What a beautiful place to grow up. I love the lone pine and I really want that cute green vehicle. Thank you for sharing your memories and your making of new memories!

What a stunning place you had to live in growing up!

What a beautiful place. I must admit to only driving through - once! Now I want to return and have a good look around and a meal of fish and chips!

Dona - Thank you for commenting - always heartening to read, my friend.

Kimberley - Thanks for visiting and yes it is a lovely part of the world - the weather's a bit cool but that's how I like it, so no worries there. :)

Sue - You should go and spend time there - definitely!

Gorgeous - and that green car! Fantastic!

'....William Dallas (one of the original European settlers in Jacob's River) who was a Scottish seaman from the Isle of Islay, and his wife Makarita (Margaret) who was descended from Moitoitoi (Kati Mamoe)....'

Hi Kay - lovely blog and photos of Riverton. Just reading your passage above...
William Dallas and Motoitoi had a daughter Makarita [aka Margaret]; she married Henry Hirst in 1860. After Motoitoi had passed away on Stewart Island, William Dallas did later marry a Margaret in Riverton, she died in 1895. Margaret was a Scotswoman, a widow, previously living in Wellinton.

I'm still waiting to verify the birthplace of William Dallas as being on the isle of Islay; although it's a possibility. Kay, so are you descended from Makarita and Henry Hirst or another child of William and Motoitoi; I'm descended from their daughter Jane [Tini]Dallas. There's a photo of William Dallas and his 2nd wife Margaret in the Riverton museum. He looks very careworn - must have been taken when he was around 55-60 years old. Margaret looks plump and happy.

Hi! Yes my facts were a mite hazy. My late Aunty Lorna would have told me off for that! I’m descended from Henry Hirst and Margaret’s (née Dallas) daughter Margaret Hirst who married her cousin Matthew Lee. He was her second husband. My grandfather was Reginald Lee.