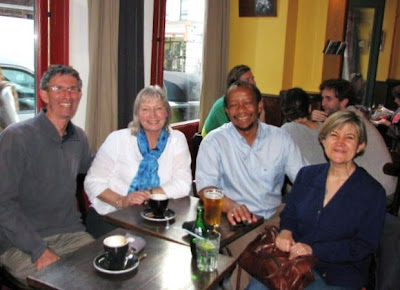 Meeting our friend the poet Rethabile Masilo and his wife for the first time 'in real life', at the cafe Au Chat Noir, Paris, before both Ret and I read at the Monday night poetry reading held there ... 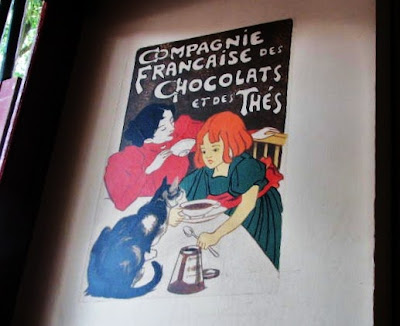 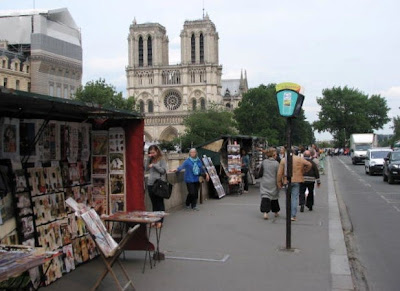 The next part of our journey was to leave Paris for Berlin by Easijet. To catch the plane that left from Orly, meant an early start. The night before we said 'au revoir' to Michael and Kate who were leaving later in the morning and going in a different direction to the rest of us. We all agreed that experiencing Paris together had been something special. Some of the highlights we talked about were the poetry reading, meals at Au Trappiste, sitting on the grass in front of the Eiffel Tower and the view over Paris we got from the top of Georges Pompidou Centre on our last night in that city. For me, experiencing the city with family and with friends Chrissie and Phil will be what I remember, with my Champagne Birthday Breakfast, the poetry reading night, meals at 'our local', a cup of tea and macaroons on the Champs Elysees with Chrissie and seeing the Eiffel Tower, all springing to mind as memorable moments.

Robert's suitcase still hadn't turned up. We were leaving on an early flight – too early for the Lost Luggage Department at Orly airport. It turned out that there had been an attempt by Lufthansa to deliver the suitcase to Paris, but lack of phone or internet meant that any attempt was always going to fail. The saga continued after we got to Berlin and discovered it wasn't actually at Orly, but at Charles de Gaul. To cut a long and tedious story short, the suitcase finally caught up with us at the most faraway and northern point of our whole trip – delivered by a small courier van to us at Jenny's parents' place in North Germany. 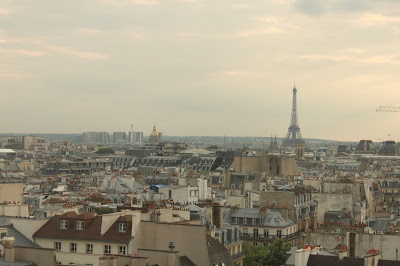 In contrast to Paris, Berlin seemed spacious and less frantic and drivers were definitely more courteous towards pedestrians.
After landing and getting a train into the part of the city where we were going to be stationed, we sought out a cafe (with internet) and enjoyed a hearty German breakfast. 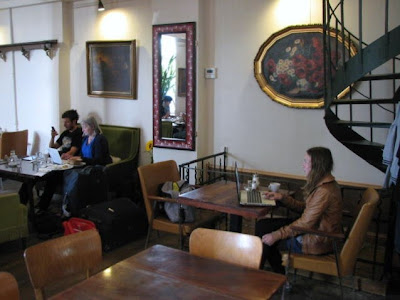 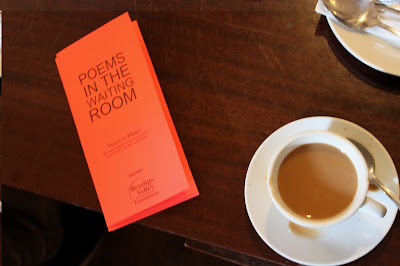 I left some Poetry in the Waiting Room cards here. (Photo by Jenny Jakobeit).

I think what I will take away from our time in Berlin is the room it gives for freedom of expression. Part of this was tagging. It kind of spoilt the look of things in much of the city – nothing (apart from monuments or things that deserved more than the usual respect) seemed exempt from waves of ugly fat squiggles and jags that wash over any available surface - sides of bridges, walls, doors, sign-posts, train carriages … even the rooves and eaves of houses aren't exempt. Berlin isn't the only city where this occurs, but it seems particularly rampant there. However street art is also predominant and creative use of it appears to be both accepted and encouraged. Part of the East-Side Gallery where graffiti as well as 'legit.' art covers the eastern side of what remains of the Berlin wall. (Photo by Jenny Jakobeit). 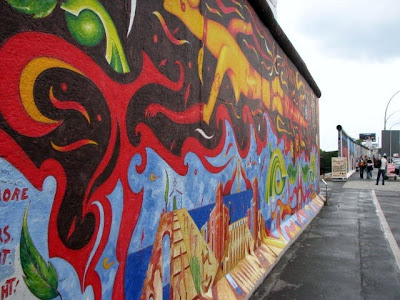 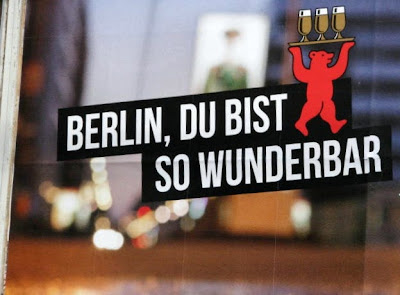 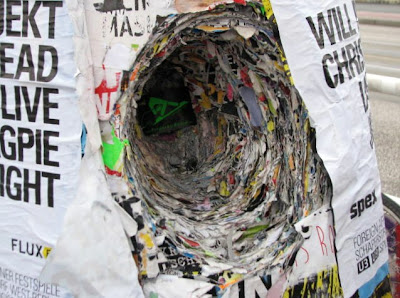 A hole cut into twenty years of posters pasted one of top of another on a Berlin pole. 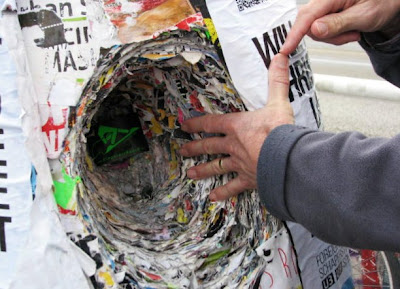 It looks like a core sample has been taken. 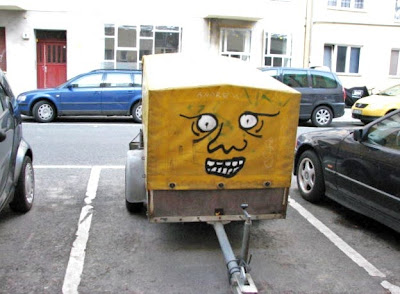 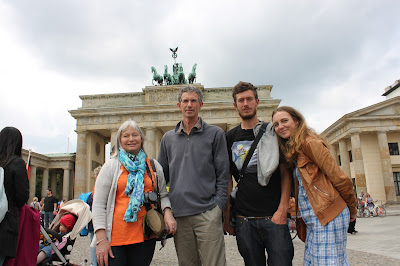 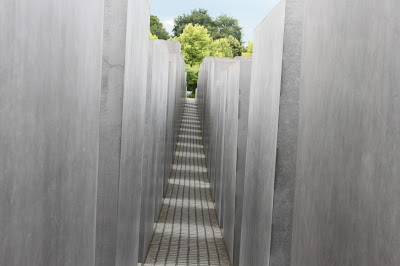 Part of the Holocaust Memorial. (Photo by Jenny Jakobeit).

Apart from the history evident here, Berlin is a city of many areas with each area having it's own character. On our walks we passed through districts that were in turn, trendy, vintage-trendy, grunge, alternative, arty, family-friendly, working class, touristy and multi-cultural. 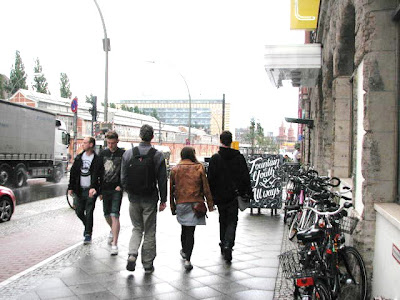 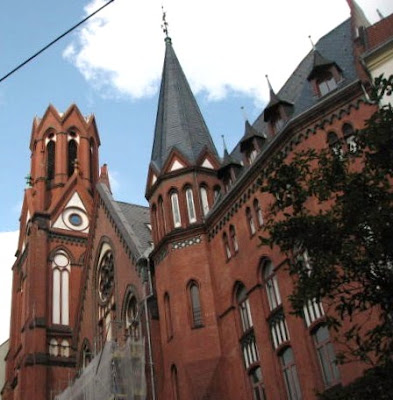 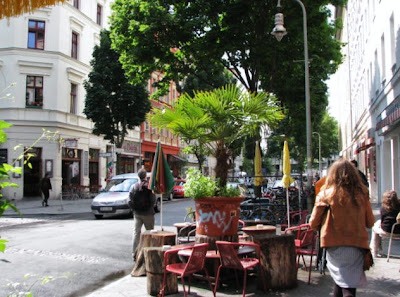 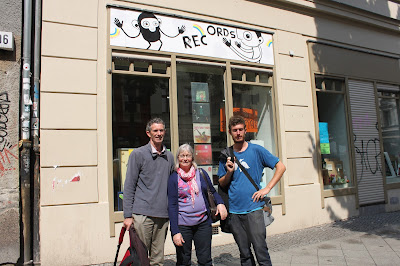 In one of Berlin's more funky districts, Michael painted this shop's sign when he and Kate were here a year and a half ago. (Photo by Jenny Jakobeit).

Our stay in Berlin ended on 2nd of July, late morning, when we caught a train for Jenny's home village of Neu Karin in North-eastern Germany. We got off the train at the town of Bad Doberan where Jenny's father met the train. It was a working day for him, but after a cup of coffee at his office, he drove us to a nearby beach resort for our first glimpse of the Baltic Coast. 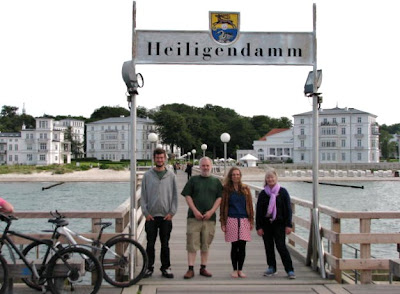 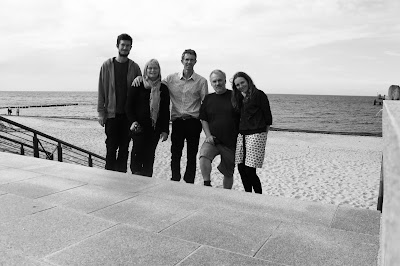 Wonderful photos! I feel like I've been walking in Europe now :-)