We headed for Au Chat Noir in Bellevue. It seemed to us to be a part of Paris that was creative, friendly and inclusive. There was a sense of freedom there. We made ourselves at home. The regular poetry reading was on and I was keen to participate. 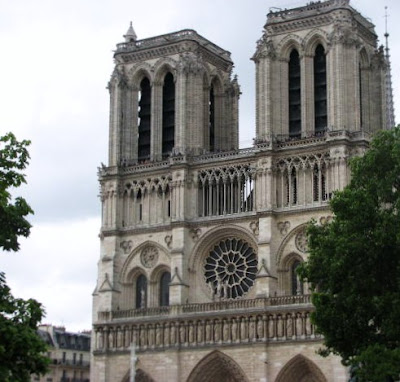 I'll always remember the frustrating feel to our first morning in Paris. We frantically tried to fit in a meeting with MnK so we could use their internet connection to find out about the progress (if any) re the missing suitcase, as well as fulfilling a planned rendezvous with our UK friends. The journey involved trains and walking. Trains and walking. (A pattern we were to get used to). In the end we got a taxi back to the apartment – which turned out to be a good chance for Robert to try out his French when he got into a discussion about rugby with the taxi driver. 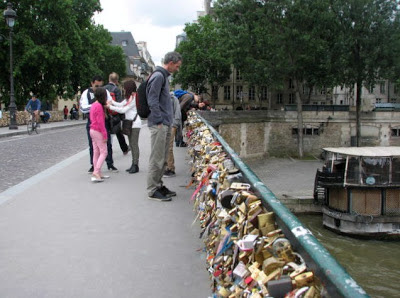 We did make our appointment with Chrissie & Phil, meeting them as arranged on Pont Neuf, albeit half an hour late. It was a happy reunion as we hadn't seen them for seven years. We spent the rest of the morning and early afternoon with them wandering central Paris, the Latin Quarter, the Left Bank, the Sorbonne district … 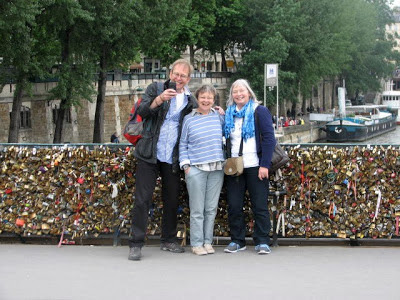 I found myself trying to get to grips with Paris but no matter how hard I tried, any connection or bonding with the city, seemed to keep slipping away. The city was turning out to be just a backdrop to the celebration of my 60th birthday. As a background to being with family and friends, it was working beautifully; but sometimes it seemed I was missing the connection I usually make with places. After all, Paris was a city I had been to before and had long-dreamed a return. 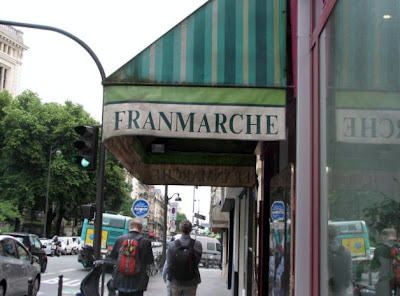 Sometimes your grey is a wall, sometimes
it is a way in, but I have to work at it.
I am in two minds about you, Paris.
I cross your bridges, I walk your streets
as if walking the lines of a song;
'... off the Boulevard St Michel'.
Hard to reach or affect, you are old
stone yet warm with flowers.

'Where do you go to my lovely?'
I need time
you are not prepared to give
and I don't have. You turn a cold shoulder.
Perhaps you will always be
the city that once, a long time ago
now or so it it seems, I left
behind in the rain.

Quoted lines are from the song, 'Where Do You Go To My Lovely?' as sung and written by Peter Sarstedt, 1969. 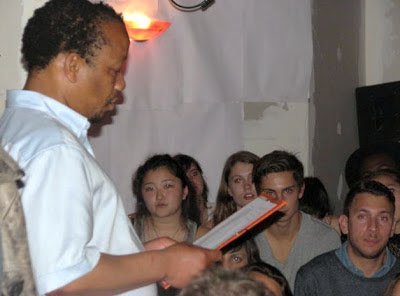 That night we attended a regular Monday-night poetry reading in Paris. Also, I was meeting Ret a fellow-poet and on-line friend of some years. The 'real-life' meeting with Ret and his wife was amazingly natural. He and his wife were just as I expected; charming, softly spoken and unpretentious. Both of them were great company; down to earth, open-minded, warm and friendly people. Hearing Ret read his poetry was a real treat and certainly a highlight of our Paris experience. 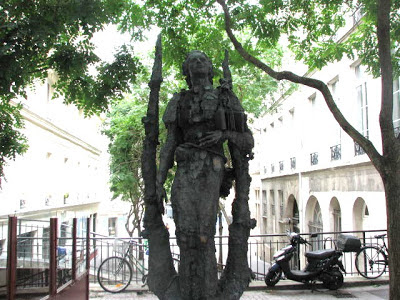 Thankfully I felt calm and relaxed when it came my turn to read. I don't always feel that way. Maybe my confidence had something to do with the mojito that Phil handed me (with the words, “Hemmingway's choice of poison”) before I went up to read. In fact it was due to the support of family and friends in the audience. Jenny asked me later why I didn't introduce myself as having come 'all the way from New Zealand'. I didn't have an answer for her right then, but thinking about it later I realised my reluctance probably came from the response of the m.c. when I signed up for the reading. I'd cheerfully introduced myself to him explaining how I was 'from New Zealand', to which he replied, “Congratulations”. Slightly sarcastic, I thought, but laughed along anyway. However it must've put me off mentioning it again. 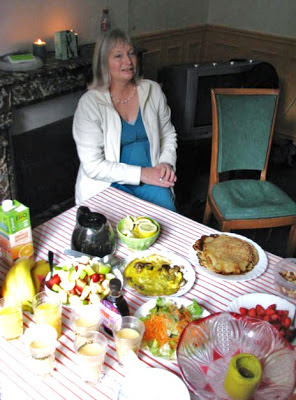 Another Paris highlight was my surprise champagne birthday breakfast that 'the kids' (as we took to calling MnK and CnJ) put on for me on the morning of June 25th. (The champagne bottle was aptly named 'Robert de Montey'). Before my eyes, the table at our apartment become magically laden with pancakes and all the trimmings with a beautiful bunch of roses placed in the middle. Chris had had to use a fork to whip the cream for the pancakes, which he said took him forty minutes. 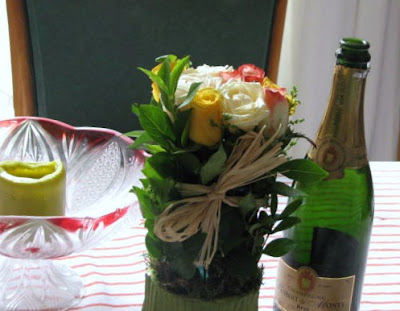 Rose petals were scattered as a music box played Edith Piaf's ' La Vie en Rose' and a wondrous 'cake' of seperate cream cakes with a lit '60' candle, was walked in. I blew out the candles and made my wish. Messages from our son Steve and from home were relayed. We would have loved to have skyped Steve & E and the grandkids in Japan but were defeated by the skimpy internet. We did manage a tantalisingly short 'Happy Birthday Gran'ma' from a just-awake R. at midnight that night. (A. was sick so we tried for a Skype with her next morning – and hereby hangs another tale ...) 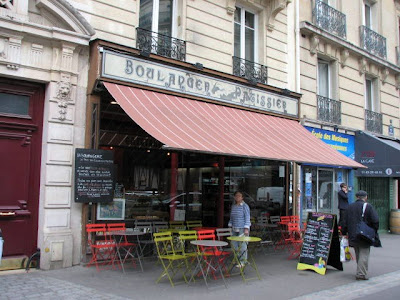 We headed off to an internet cafe to try and Skype granddaughter A. - to no avail as it turned out – and in our haste, locked the key in the apartment. Why only the one key between six people? was a cry we often heard during our stay there. Chrissie had her bags inside the apartment and was due to leave for the UK after lunch, so it was vital we get back in before then. Using the cafe's phone, a panicky call to our host resulted in 'this is a big problem' response from her and a very long wait for us until her husband could deliver another key. (Thankfully it was in time for Chrissie to get her bags).

The Champs-Elysees was another planned event, this time for Chrissie and me – a walk down it to a cafe where thanks to a friend of Chrissie's we could 'play ladies' and treat ourselves to macaroons and a cup of tea. Chrissie and I have been penfriends since we were eleven years old, so a cup of tea and time together is rare and always special. 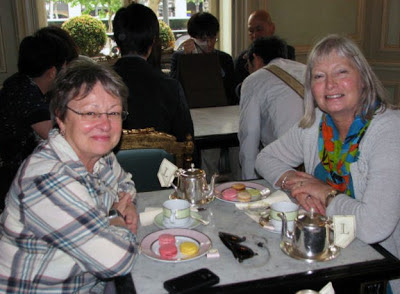 Another highlight was our trip (on my birthday) to the Eiffel Tower. But would you believe when we got there it was 'On Strike'? 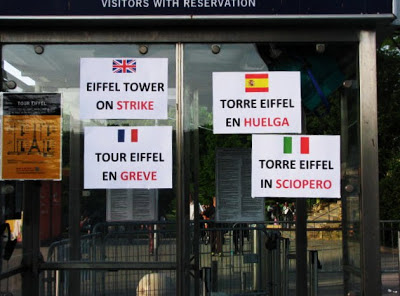 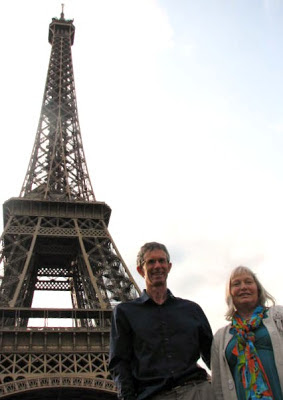 Old Eiffel delivered anyway, its intricate network of metal lace living up to all expectations. It didn't really matter that we couldn't go to the top. It also meant no crowds and no queue, so it couldn't have been better planned.

And if C'est la vie! Then it's actually a pretty good one.

Photos, a detailed account AND a great poem. Thank you Kay! *satisfied sigh*

well titled...so I believe I'm understanding that Paris rolls as Paris rolls and it's best to just go with the flow! love the birthday breakfast...magnifique :)

ritcEnjoyed the poem Kay..sixty is another number...but we all age together... as you said in "Strangely parted" :"to my children ,I've always been old. A tree,never the sapling". It's all relative. Have happy travels.

Katherine - Thanks. It is all still a bit of a blur, so I am glad I can deliver despite the giddy feeling. ;)

Theanne - You have put it very well - so true.