Boxing Day we went for a walk with my sister and her family. After the walk in the black birch forest (see earlier post) we had lunch in the town of Lawrence (famous as the first place where gold was discovered in New Zealand) and on the way home, stopped off at a disused railway tunnel that is soon to be part of a bike trail being built from Lawrence to Roxburgh (or maybe even as far as Alexandra). 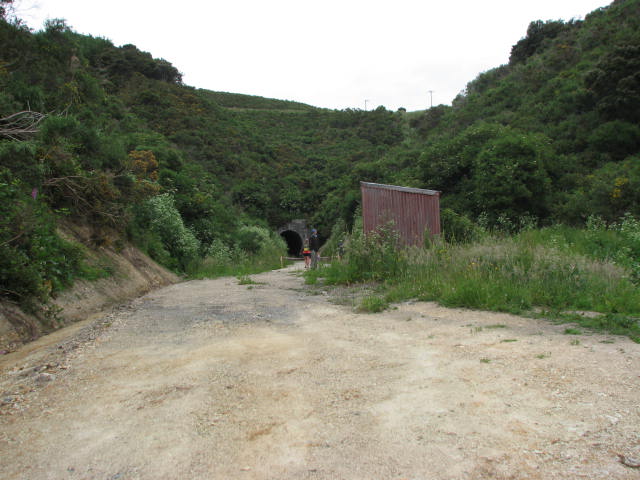 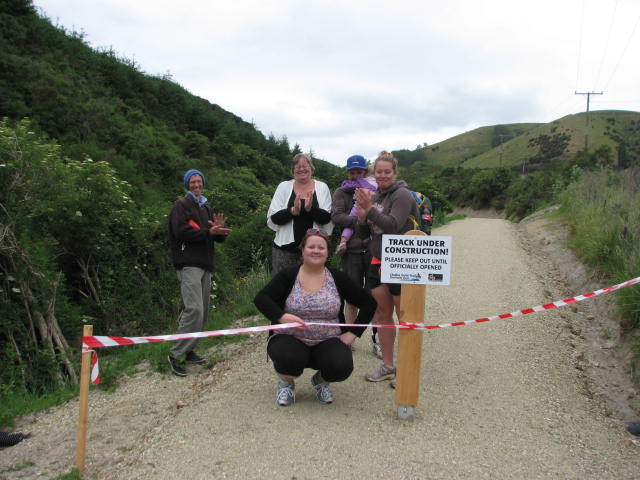 As the tunnel is on my brother's land, we felt entitled to 'open' this part of the track! 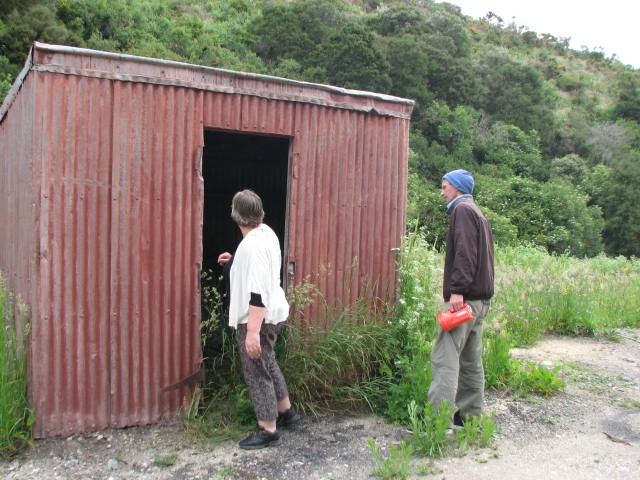 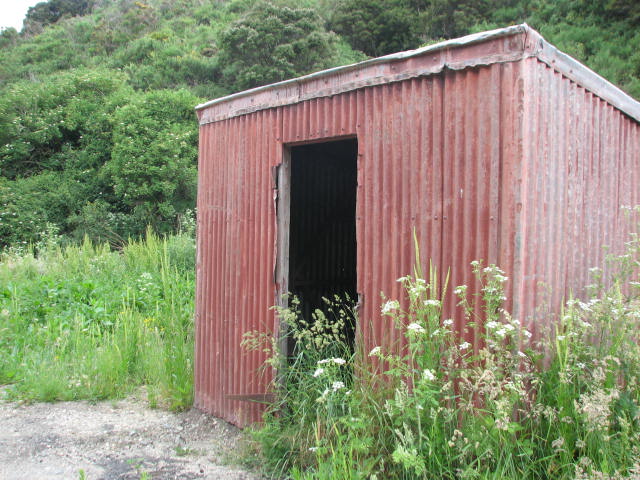 What made this investigation of the tunnel particularly interesting to Robert was that just the evening before while at a Chistmas Eve mulled wine get-together at the Anglican Church up the road from us, we met a former fire-stoker (firer) for the old steam train on this run; Dunedin to Roxburgh. Robert's late uncle was a train driver on this line and when we asked Bill if he remembered Alec McLeod, he said he did - that he had 'fired him' - meaning, stoked the fire for the engine. (At first, I thought that he'd literally 'fired' Uncle Alec and was prepared not to like him ... until I learnt the truth and decided he was a good old bloke after all!) 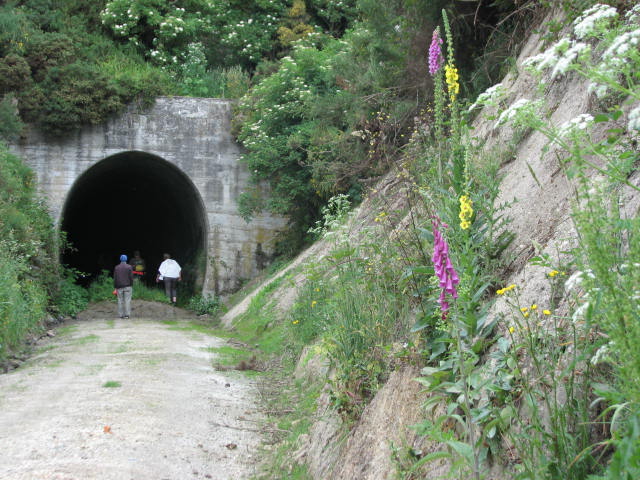 We approached the tunnel, overgrown inside and in need of some care and a clean-up for the bikers. 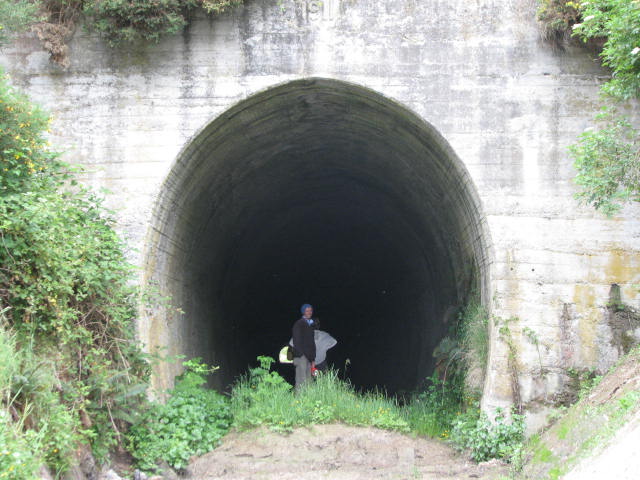 I wonder how many times Uncle Alec drove the goods train through here with its load of fruit from Central Otago orchards and gear for the builders of the Roxburgh Dam? 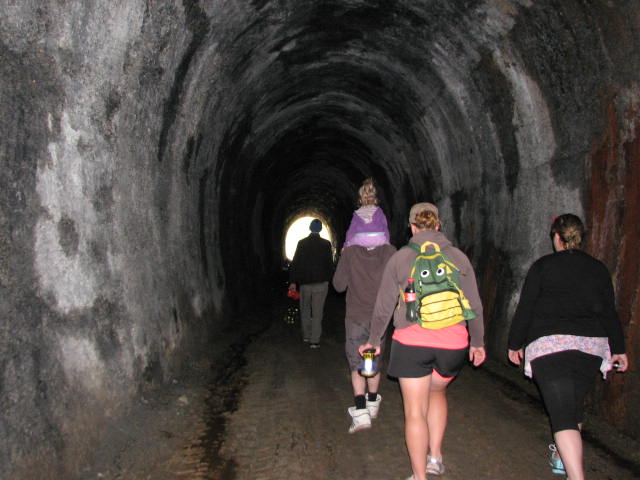 It was a long way through there in the dark, looking back every so often to gague the distance from where we entered, to the light at the end, while taking into account the fact that we had to turn round and make our way back again.

In the middle, I thought I heard soft footsteps behind me which was funny because there was no-one behind me. It wasn't a scary feeling though, more of a comforting, reassuring feeling of companionship, as if someone was making sure we were okay. (Once we were on our way back to the car, I told the others what I'd sensed and one of my nieces said she'd also felt an eerie feeling in the middle of the tunnel).

Some of us were more nervous than others, but that is understandable considering that those who were the most nervous are Christchurch earthquake survivors. 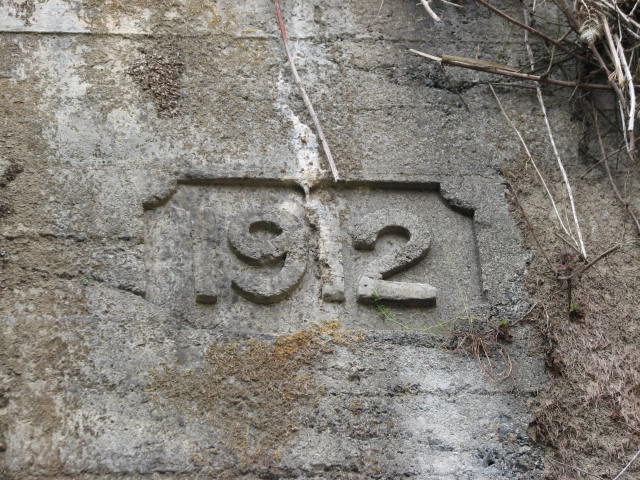 At the end we discovered that the tunnel had been built a hundred years ago. (At the other end of the tunnel it had 1911, so it had taken the builders a year to construct the tunnel. Well done them).

Tomorrow we leave Queenstown. It has been a great eight days away. Always good to spend time with families. All the same, it will be good to get home to the cats and the garden.

Once we're back home tomorrow, I'll post more photos & accompanying text of our travels. Robert and I are off now to catch the bus up the hill.

A fascinating post. It will be great when the track is turned into bike trail.

Sue - There are some great tracks going uo, or already up, we've noticed.

That was so interesting. Thank you Kay.
As a cyclist I would enjoy that track through the tunnel

Avus - You would love all the tracks that have been going up the length of NZ - it is now possible to bike (or walk) from the top of the North Island to the bottom of the South - of course you'd have to take the ferry in between the islands!