Book Bus Day At the Bay 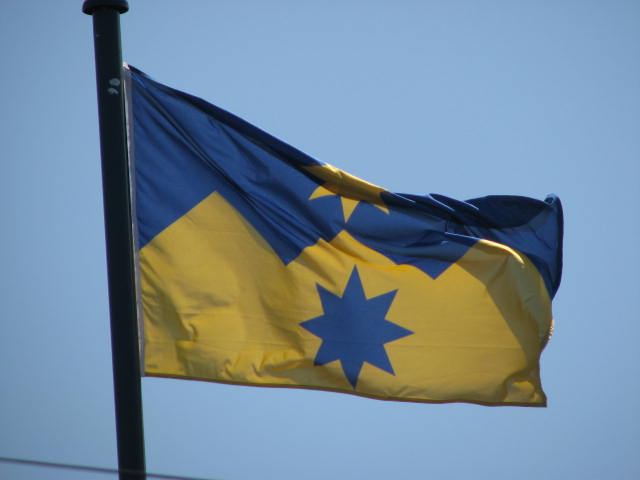 It's always interesting to see what flag is flying from Fox Hall, Silverton Street. Every day there is a different flag. Today fittingly enough it was the Otago cricket club flag. (Yesterday the Otago cricket team Volts won the National Provincial 20 / 20 Competition). 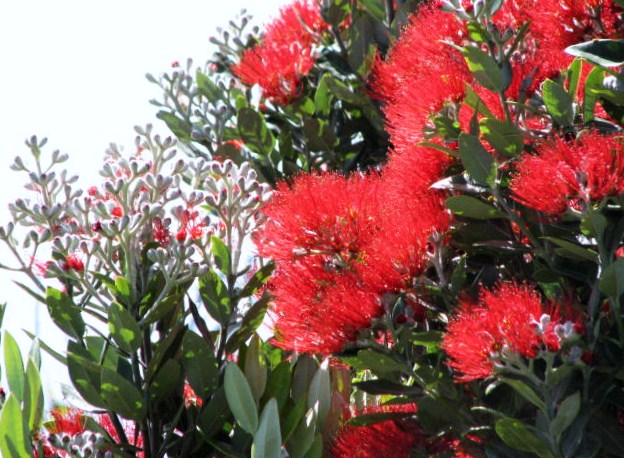 I was on my way to the Book Bus and appreciating the luxury of being able to take my time about it. 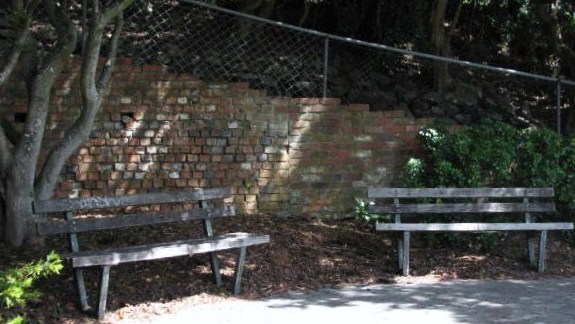 In the seventeen years we have lived in Anderson's Bay, I have only ever sat here at the Plunket Rooms rest area twice ... says something about taking time perhaps. 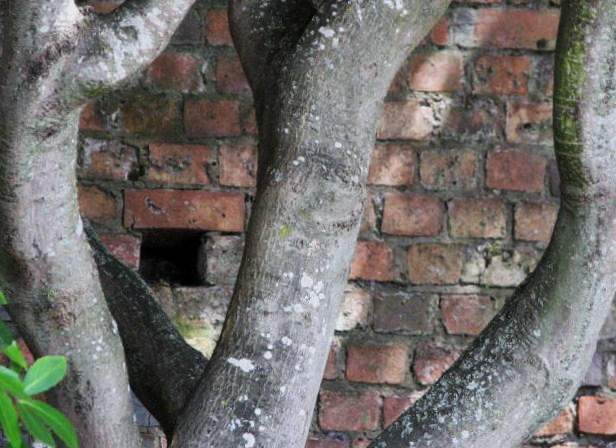 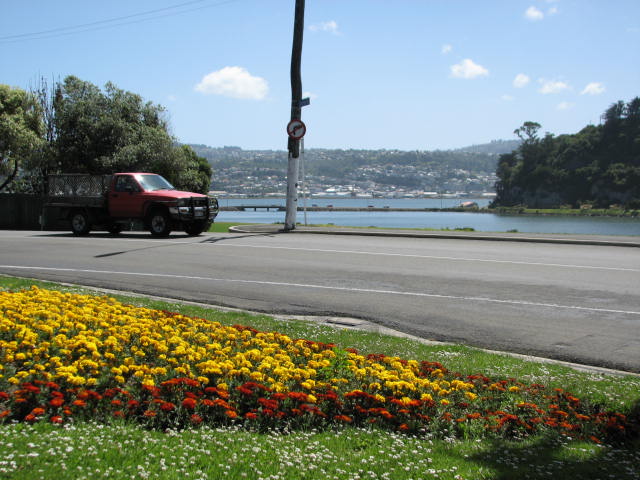 I was still too early for the Book Bus, so I  sat down and enjoyed the sun & view, 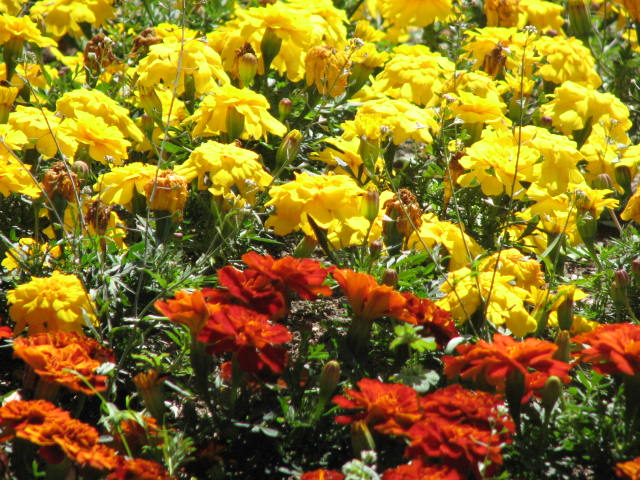 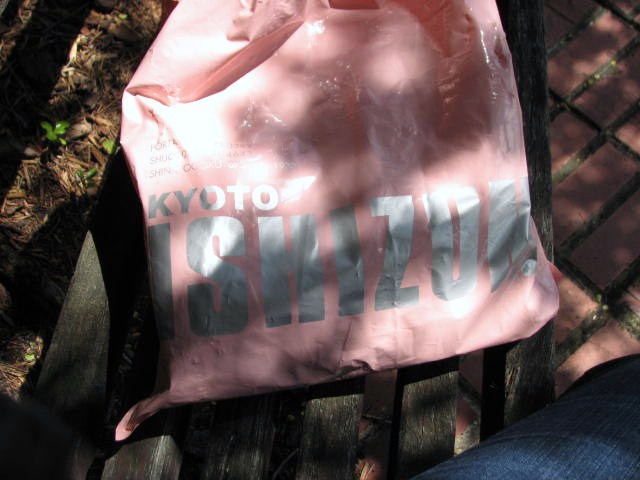 with my overdue library books in a Kyoto plastic shopping bag that was looking a long way away from home. 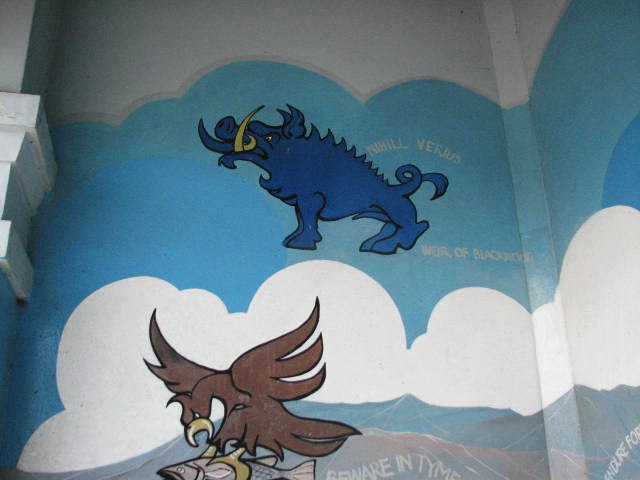 Just around the corner, the bus-stop paintings depicting Scottish crests and shields. 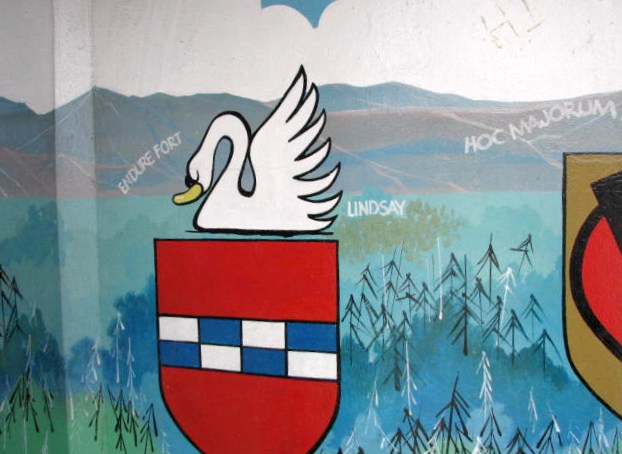 Some more of the paintings on the walls of the Anderson's Bay bus-shelter.

(Co-incidentally, as I write this, on tv is a documentary about the London blitz during World War Two, with references to the bomb shelters called 'Anderson Shelters'). 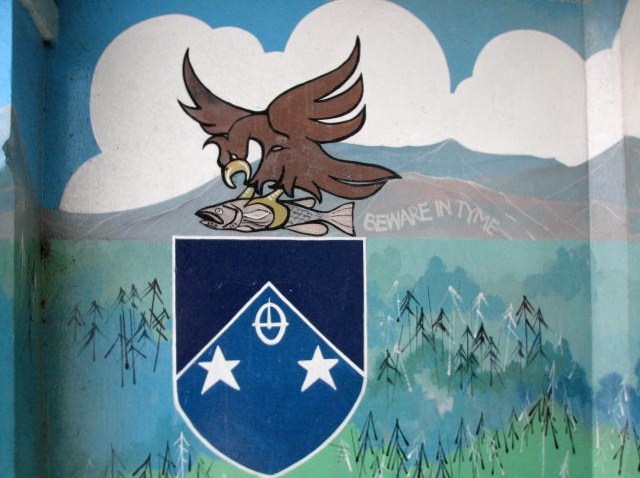 On I plodded to the Book Bus, where I chose far too many books.

While there I overheard a very elderly husband and wife chatting to the librarian- driver. They put me in mind of that song / verse, 'The wee, wee man and the wee, wee woman ...' How does that go now? Anyway, the woman was saying in quavery little voice,  "Of course the nature of a man's work means that they have far more time to read than a woman does". (I presume she means once you have retired?) I must say, when we get to that stage, I plan for a fair share of any workload between Robert and myself.
Before they toddled off down the stairs (I was glad that it wasn't a windy day;  I think if it was they'd both be in real danger of getting blown away!)  I heard the wife ask her husband if he was sure he had enough Westerns. For some reason, the thought of that tiny, frail old man reading Westerns made me smile.
- January 21, 2013

I never knew those paintings were there on the shelter. I'll have to check them out.
I watched the Blitz programme too. Very informative and sobering.
We must catch up, I'm feeling very guilty that I've still got your books.

Yes Sue, we must! Once the year settles into a more steady groove, a coffee together will be great.

I remember sleeping in Anderson Shelters. Am I "history", Kay

Um... that "Otago Cricket Club flag" is actually the official flag of Otago. I should know, BTW - I was on the committee which helped choose it about five years ago. It's widely used by organisations across the region - most prominently by the Otago Regional Council.

Avus - You should be proud to be part of history - but not 'history' for a while yet, I trust!

James - I only go by what the guy who flys the flags writes on his sign in the window actually; otherwise I wouldn't have a clue what the flags were (a different one each day). Maybe it had something to do with the cricket win. I dunno you'd have to ask him. BTW It's a lovely flag any way you look at it.

It is a nice flag. And I know the guy you mean - there are (as far as I know) three of us who fly unusual flags most days in Dunedin... there's another not far from Somerville Street in Spottiswoode Street, and I do the same over at the foot of the hill in St Clair. :)