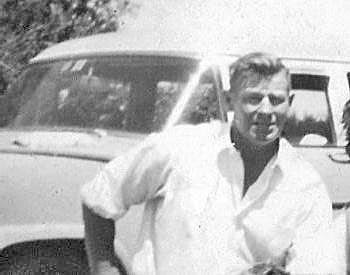 Dad liked horses. One of the horses (draught horses) his father had on the farm was called Prince. I remember him telling my sister Susan and I a story about the draught horses ...  it was a story based on a biscuit tin lid picture of two little girls looking at a blacksmith putting on a draught horse's shoe. While we looked at the biscuit-tin lid picture, he would bring it to life with his story. He liked telling his kids bedtime stories. The early ones were were about his mustering days with his dog Fay, the later ones were about a horse called Patches who put out a forest fire.

He liked dogs. He owned headers (sleek and silent) not hunters (rowdy and hairy). He liked to train dogs for dog trails. He had favourite dogs - I remember Gyp and Jan being two favourites.

He liked poultry - ducks more so than hens. We used to have a pair of mallards he named Arthur and Martha. Shortly before he died he'd looked into raising turkeys.

I don't know if he liked milking cows, but twice a day he used to milk our house cows - one was called Dirty Gertie (for obvious reasons) and another he called Ronelda because he got her from a farmer called Ron Elder. He liked naming animals (e.g. any skinny lambs were named 'Ghandi').

He liked reading cowboy books, the Readers Digest, the newspaper, the Farmer and the Tablet (the Roman Catholic church's newspaper).

He liked cars - I think especially old cars (like his first car, a Dodge; black with running-board), tractors (the Fordson, the Massey Ferguson, blue).

He liked his religion (Roman Catholic) and praying the rosary. He liked going to Mass every Sunday, and all his seven kids (after they reached the age of seven) to go with him to Mass every Sunday (without fail). Sometimes after Mass, he liked to buy us an ice cream.

He liked taking his kids with him out on the farm (lambing, tailing, hay-making, rounding up sheep, ploughing, sheep shearing ...).

He liked going to the races (especially, I think, the Trots - Harness racing) and having a bet.

He liked singing country & western and yodelling (and could do it very well) and playing the mouth organ / harmonica - again, very well.

He liked to be clean-shaven. He liked his hair and his electric hair-clippers and the short-back-and-sides haircut that Mum would give him. He liked his hair brylcreem-ed on Sundays. He liked that he was showing no signs of baldness. (According to our Uncle Bill, 'McKenzies have good hair'). He liked to say us kids could swing on his hair, it was so strong. He liked having strong stomach muscles, he'd hold his stomach in - "Go on, hit me, hit me". We'd punch him in his midriff as hard as we could, meeting a hard wall of muscle. "As strong as a rock", he'd boast.

He liked deer hunting (his greatest achievement in this was shooting a 24-pointer stag on the Longwoods, Southland, circa 1950). He liked his .22 rifle with its honeyed-wood..

He liked building things (I remember him building the garage) and was a bit of a fix-it man getting ideas from the Farmer. He kept a scrapbook with interesting articles and fix-it ideas pasted into it. He kept diaries - small, blue farming diaries with a pencil in the spine for the entries, such as, 'today topped thistles back paddock'. (His spelling in these diaries is atrocious!)

He liked kids clambering up on his knee. Once there we'd reach up to touch his 'thistles' (whiskers) and count his 'brains' (the lines in his forehead). He liked coming in from the farm and playing with his kids -  giving them horse-rides on his back  He liked to carry his kids off to their beds over his shoulder - 'like a sack of spuds', then pretending he didn't know where they were, spinning round and round trying to find them, their legs flying out and them laughing, laughing, laughing ...

He liked listening to funny programmes on the wireless and when TV arrived,  watching funny TV programmes (Harry Worth was a favourite). He liked films (the pictures) especially the British Carry On movies and American Westerns.

He liked rugby. He liked a beer and a yack. He liked telling yarns and jokes. He liked making his kids laugh with silly toilet humour jokes.

He was always singing or whistling. 'Pass the Biscuits Miranda' was a favourite (especially at the table when he was wanting one of us to pass him the butter). So was, 'Don't Go In The Lion's Cage Tonight".

He was a good mimic and liked to mimic accents and the way different people talked (taking them off).

He liked taking photos with his old-fashioned camera, until it broke..

He liked to give Mum a yellow rose on their anniversary, picked from the rambling rose bush growing against his parents' house.

He liked to think all his kids would get their driving license when they were 15. I was 15 years and four months when he died (in 1968, suddenly, from a coronary thrombosis while at Mass). I didn't end up getting my driving license until I was 22. One of my last memories of him was when he gave me a driving lesson in the Land Rover. We drove around the paddock closest to the high-school bus stop, but I was so busy worrying about missing the bus and looking out for its approach, I couldn't concentrate.

He had a dream of owning his own farm with a house on a hill and a creek at the bottom.

I don't know what his favourite colour was.

He never lived to see man reach the moon or Woodstock or colour TV or punk music. I think he'd have been rather tickled by the idea of man reaching the moon and colour TV, but not impressed with either Woodstock or punk.

What a wonderful tribute to your Dad. You didn't have him for long, but he obviously made a huge impression on your life.

I absolutely adore your father...a man who was his own person! with rules and likes and dislikes...I'm thankful you had him, if only for a short time...because now you are able to write about all you learned about him and from him! Precious memories!

I have welled up with tears. You got me. Your dad sounds like he was a wonderful warm-hearted man who loved his family very much. I was reminded of my own dad. We have discussed before that they were a lot alike. My dad also loved to sing, had a great sense of humor and told us good stories, he was a hunter and a fisherman and he also liked to be clean shaven and he always smelled of Mennon after-shave or Old Spice. Thank you for sharing your memories and also for reviving my own. I am sorry you lost him so young. Your dad sounds like one of the good 'ens. A real man!

A beautiful tribute. I am with the others--I adore your dad, and you!

Sue - yes a huge impression - he was a great Dad.

Theanne - Thank you - I like to keep his memory alive, it's important to me.

Dona - Yes, we have compared dads before and they do sound very alike. :) Thanks for your comments, they mean such a lot to me.