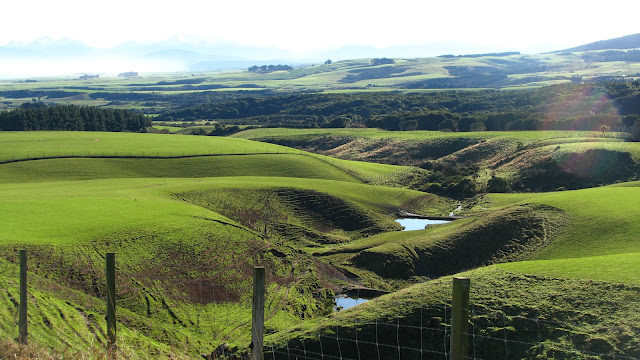 turangawaewae ... Orepuki ... taken from the top of what was once the McKenzie farm at the foor of the Longwoods


I love phone conversations with my granddaughter V. (two-and-a-half years old). "My Daddy's meditating", she piped down the line yesterday. She then proceeded to tell me that she had her fairy dress on, and wings.  She always finishes with, "I love you, bye-bye".

It's not a good look, but it's just too damn convenient. I'm talking about wearing my glasses on a cord around my neck. I need them for driving, TV and looking at anything beyond two meters (two yards, six feet). Usually I wear a scarf so that the glasses mingle in a bit, hopefully un-noticed. A parent at work one day said how annoyting it was having to take glasses on and off and how she was always mis-placing hers. "You should have them on a cord round your neck," I said. Her reply was along the lines of that'll be the day and laden with allusions as to how it's such an 'old person / librarian-look'. (I just laughed along while secretly checking that mine were safely hidden under my scarf). At work yesterday though, I was wearing a plain turtle-neck without a scarf, the glasses loud and proud and hanging down like a necklace. J. (four years old and with an enquiring mind even higher than your average four-year old's enquiring mind) asked why was I wearing my glasses like that? I tried to explain. He wasn't impressed. "You look like a jerk", he said. Okaaaay. Today I wore a scarf and E.(a three year old with large and serious eyes) said, "I like your scarf, Kay." That made up for the jerk remark. Kind of. So far then, hiding my glasses under a scarf wins. (Well if it means I don't get called old, a librarian or a jerk, that's got to be good. Right?)

I've been feeling a little sorry for myself lately, for no particular reason and nothing major, just a season of the soul. But my dream last night made me feel a whole lot better about my life. I dreamed that I went into the bathroom and our bath wasn't there. Now in normal circumstances this would be classed as a major disaster. I am rather fond of our bath. Turned out 'someone' (one of those nebulous characters that waft in and out of dreams) had taken it away to get rid of a stain. Then when I opened the door to another room, it was full of unwelcome vermin. I quickly closed that door again. Among other things too hazy to remember now, but all of them unfortuante, someone was showing off a pet dog they'd just bought. Going by their excitement, they obviously thought it was an extremely cute dog. I wasn't saying anything because I thought it was the ugliest thing I'd ever seen. That's about when I woke up. I think my expression of disgust at the ugly cur was audible because Robert said, "Don't worry, you haven't slept in, it's not seven o'clock yet." At the time, half awake and still realising that it had all been just a dream and maybe my real life wasn't so bad after all, I didn't know how to explain that it wasn't the time I was moaning about, but a missing bath and an ugly dog.
- August 08, 2012

I thoroughly enjoyed this! Thank you.

Well, at least you won't lose your glasses. I used to hate it when people wore their sunglasses on the top of their heads but I am guity of that too...

That's hilarious! Jeez, you should get danger money for working with kids.

kids and dreams: similarities. both tell it ilke it is and then your adult mind decides what to do with the information. hee hee, you are a good sport, kay.

i am sure the absence of your bath means you need to play in the mud and the ugly dog means you are beautiful...