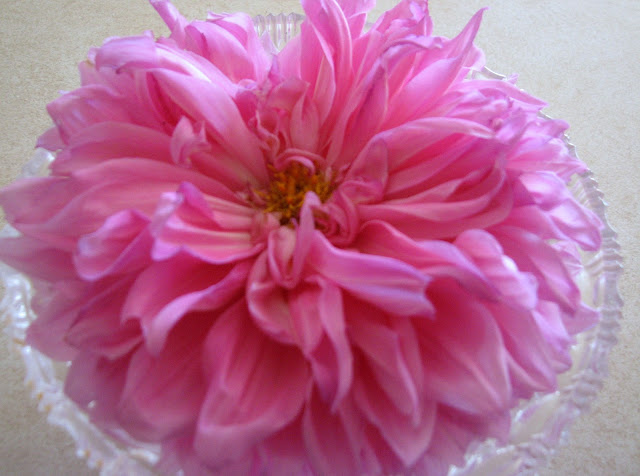 
I had lunch with a friend today at a new eatery just opened in our local shopping area. It's heartening to see this swing towards shops and cafes springing up in the suburbs, making it possible to walk for a coffee in your own community.

When I dropped my friend off at her place, I admired her garden showing off the last of her roses and dahlias before winter's advance. One of the dahlia's flowering heads had come off (the one in the photo above). My friend said that sometimes the heads were too big for the stems.

I sympathised, because for the past few days my head too has felt too big for my neck - sounds weird, but that is what it feels like as I struggle with a strange head-ache (probably sinus-related. At the moment I am fobbing it off with a mild pain-killer). 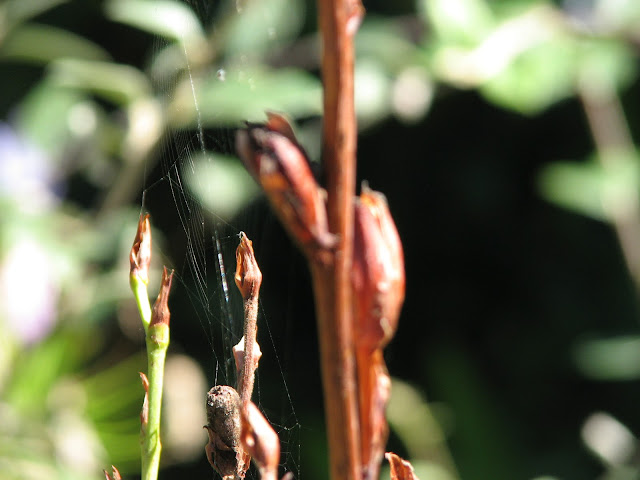 Our garden is beginning to wind down. Spent leaves curl and flowers turn to seed-heads. 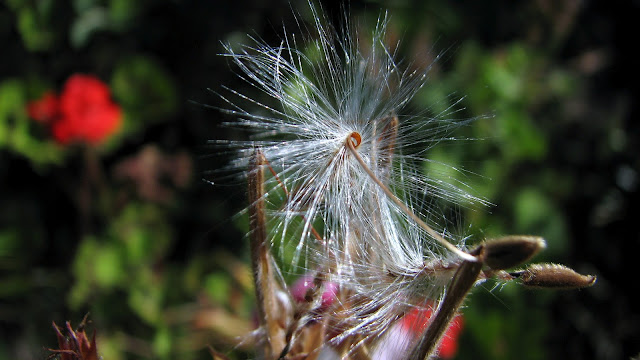 It is a sad time for us at the moment with the death of someone special to us. I have struggled to absorb the difference his death makes to our world (and even more so, the difference this makes to the world of his family).

Death and sadness are inevitable in life. Nature, and in particular the garden, is a comfort at times like these. The person who died loved his garden and was a very successful and generous gardener. Being among plants and flowers helps with the grief and is a way to remember him. 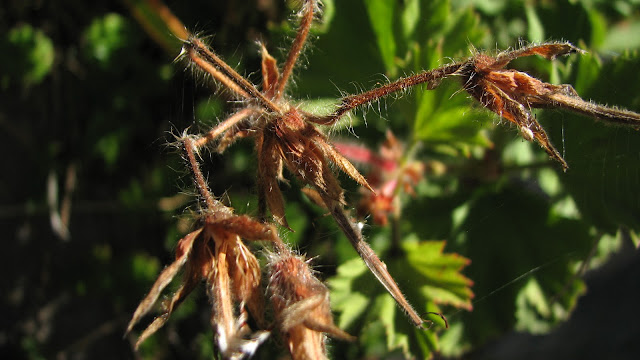 When we were in Japan I remember seeing a patch of dead lotus flowers. It was the middle of winter when we were there, so the flowers were well and truly spent. The head of each flower was doubled-over, hanging down towards the water the tall stems were standing in. They looked totally defeated. Like brown, empty paper bags, without life, purpose or colour.

I tried to imagine how they must have looked in Spring, and how they will look again (even though I wouldn't be back there to see them) creamy, pink and full against vibrant green.

It struck me that here I was looking at them on the last day of the year. 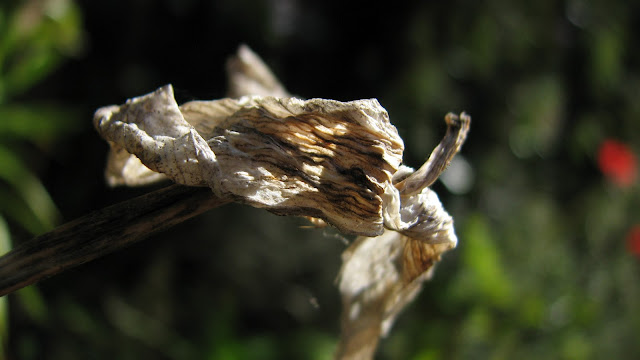 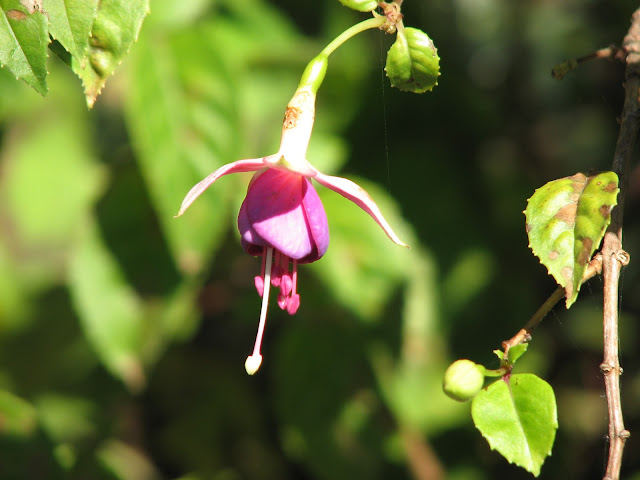 Autumn is being kind to us at the moment and we are enjoying mild, warm days. I am attempting to appreciate every minute of them while they are here.
- March 29, 2012 6 comments:

Info. re crows are from bits and pieces I read about crows from various on-line sources. 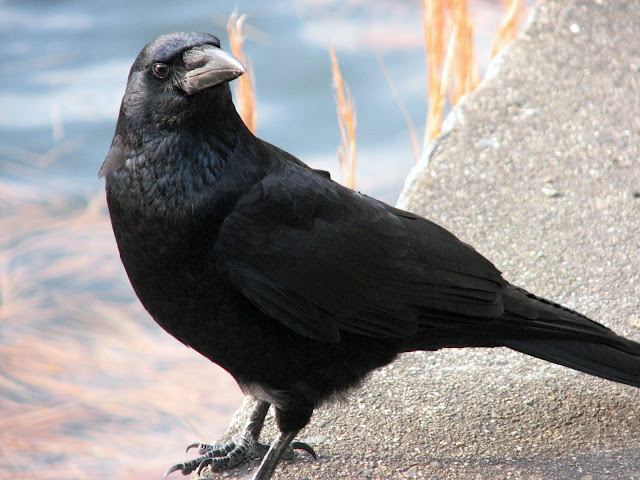 Birds don't usually stand so still for a photo. This crow surely knew what an important day it was - our first day back in Japan, and Robert's birthday. Such a knowing look in its eye.

In Scottish folklore, the crow has 27 different cries,
each cry for a different event,
such as the coming of good fortune or important guests.

One of the features of our second visit to Japan, was hearing the caw of crows wherever we went. More often than not it was a single crow, its cry a haunting call echoing off grey stone and bare trees. 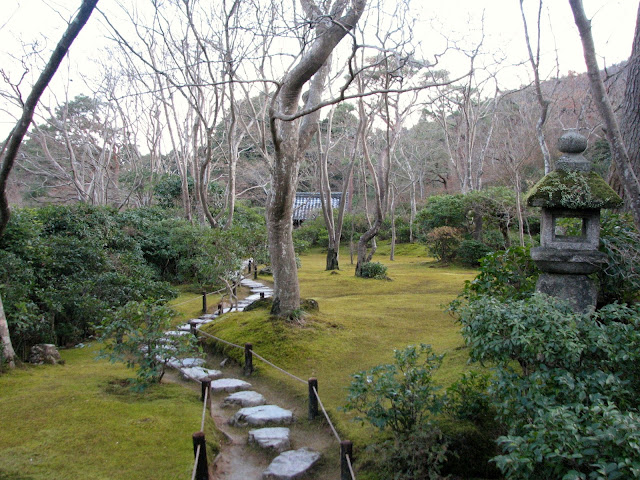 In China and Japan, tales describe
a three-legged crow
who lives in the heart of the sun


The crows triggered in me a dormant appreciation of haiku. I used to write a lot of haiku, but haven't for years. However, inspired by both my son Steve (who on the odd occasion tweets a haiku - extremely good ones) and the crows, I decided to also write some haiku (and tweet the results): The first haiku that came to me was after hearing a crow somewhere on a roof above us as we walked along the famous alleyway, Ponto Cho  - one of my favourite places in Kyoto. The place seeps ancient history as you walk down the narrow street cramped with historic shops, cafes and bars. 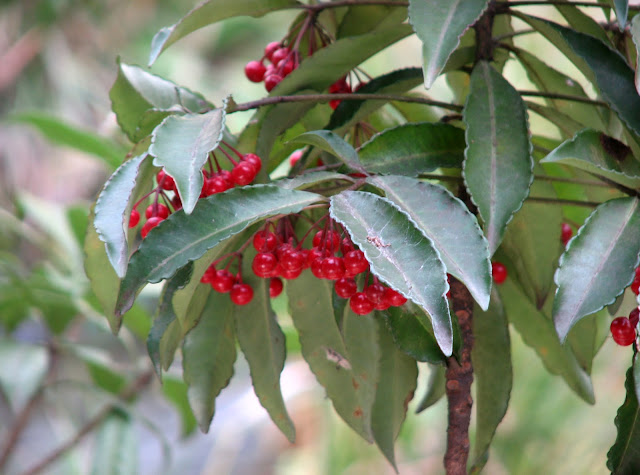 red, winter berries are a popular symbol used in the new year decorations we saw in every doorway and gateway

Another highlight was seeing the house of a student of Basho, the famous haiku poet. As we stood outside the gate of the small, thatched house, I again sensed history and timelessness. I was able to feel that permanence of place and time is possible and to accentuate all that, or so it seemed, was the sound of a cawing crow. 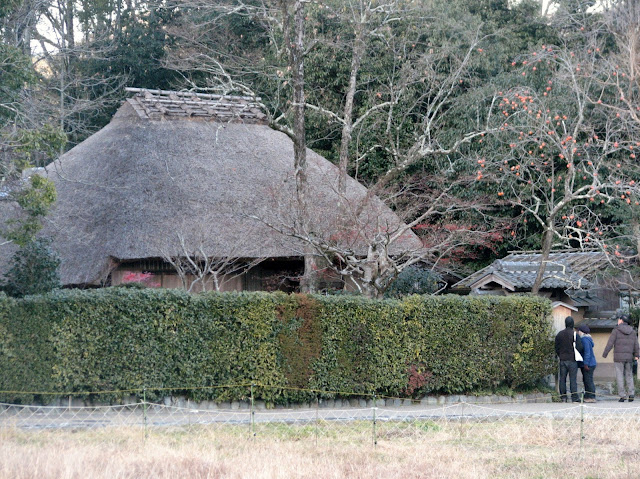 In mythology, it is believed that one of the crow's abilities
is to divine the future
and dismantle the past

I tweeted another haiku:

Here where Basho once visited
again
the caw of the crow 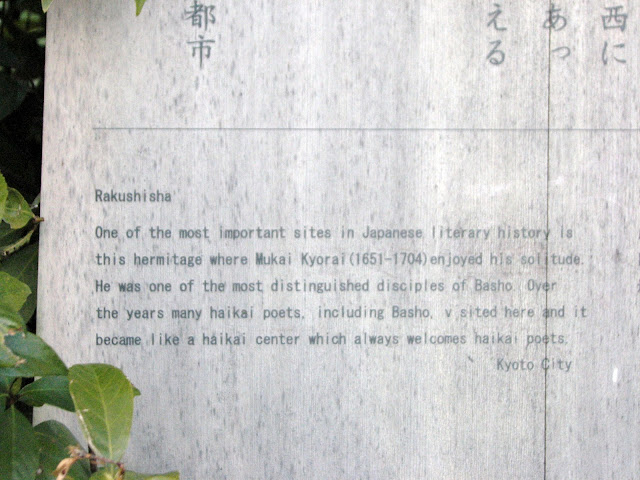 Another time as we walked to the railway station to catch a train for my granddaughter's swimming lesson,  once again I heard a distinctive and loud 'Ark Ark Ark'. I asked my daughter-in-law what the Japanese word was for crow. Karasu, she said. She described a story, or fable, about the crow (it was maybe Aesop's fable about a greedy crow). She explained that in Japan, crows aren't seen as endearing birds. This is due I'm sure to their scavenging habits. I said that we don't have crows in New Zealand, but that seagulls were looked upon with some disparagement too because they scavenge. She said she remembered when travelling in Europe that she was so excited to see seagulls and thought them lovely, but the locals thought she was crazy for liking them.

In Irish mytholgy, the battle goddesses,
Morrigan and Badbh,
regularly took the shape of crows. 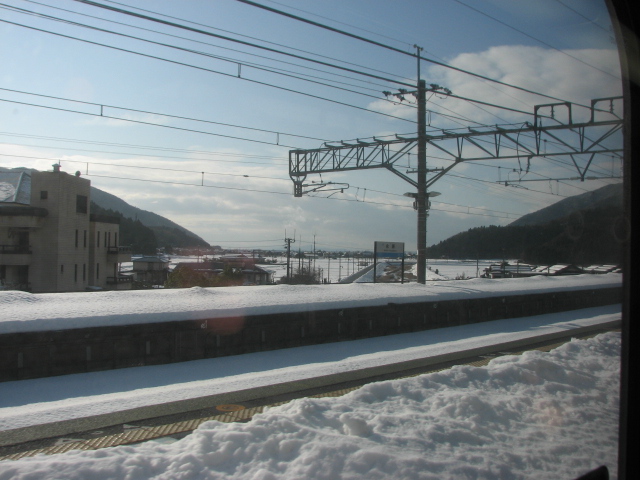 A few days before we left Japan, we travelled by train with our son, daughter-in-law and grandchildren to visit Kanazawa (Robert was keen to see the place as he teaches students who come from that city). From there we went on to Toyama, on Japan's west coast, where Steve lived when he first came to Japan. I find it amusing that while he was living there, he was often mistaken for a Russian. (A lot of Russians visit Toyama, as it is relatively close to the mainland of Russia). 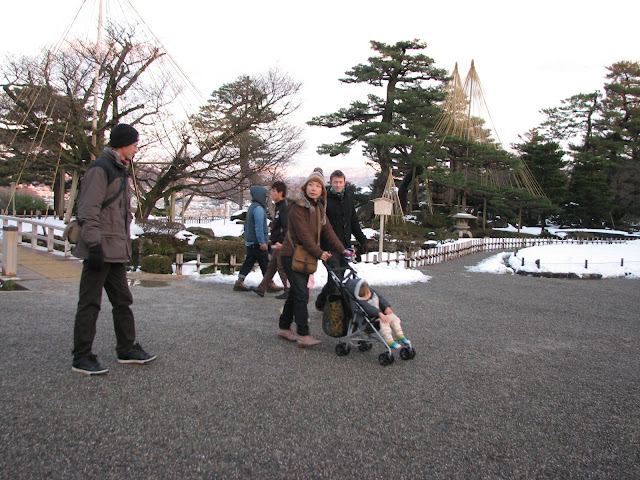 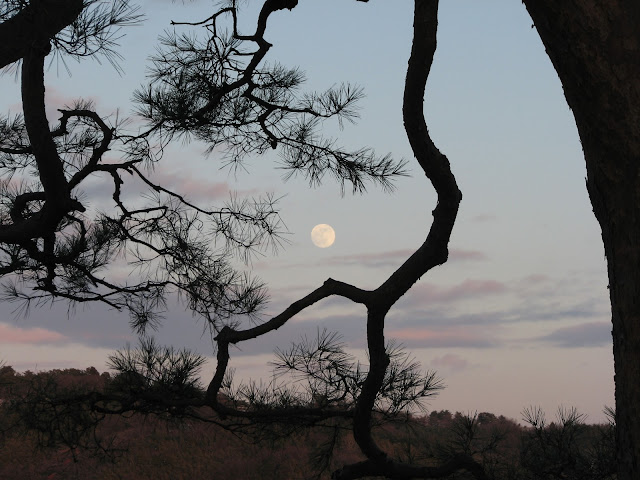 Again, crows featured. Especially in Kanazawa  where in the Gardens there, just on dusk, we saw dozens of crows descending on to patches of deep snow. Unfortunately, due to poor light, we couldn't get a good photo of this. There was also a full moon around the time we were there and captured through the bare branches of trees, it was another 'haiku moment' - but this time, one committed to camera and memory rather than to words. 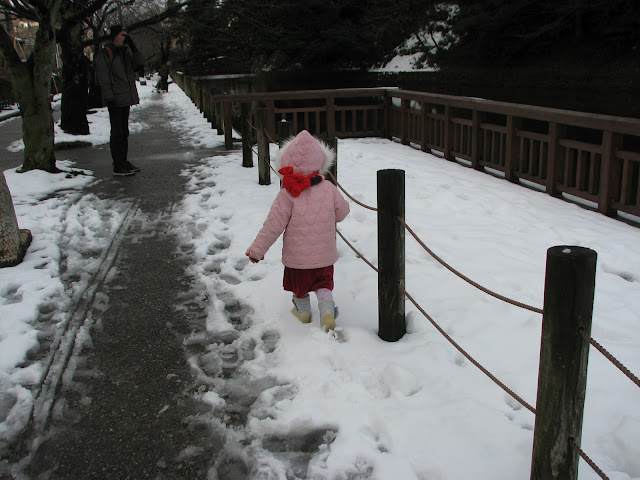 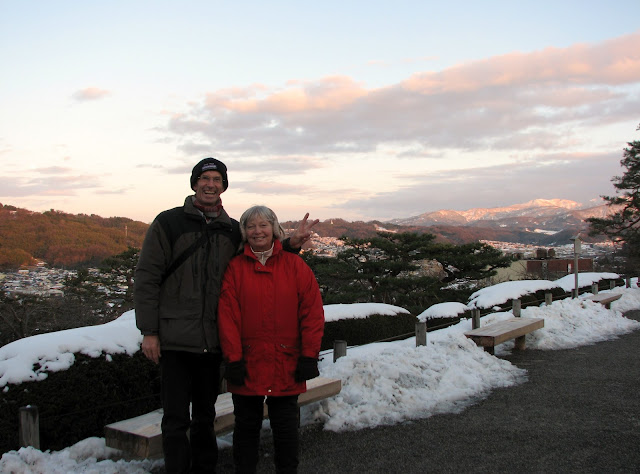 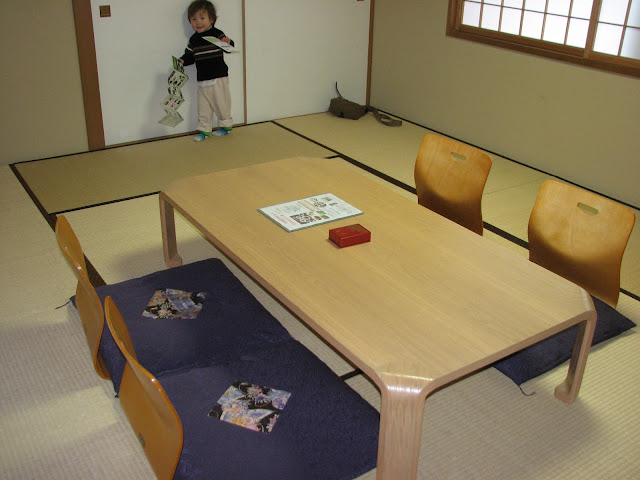 We stayed in an Onsen Hotel while in Kanazawa. Onsen is a public bathe in a natural, hot-spring pool wearing nothing but your skin. The baths are segregated and as Steve put it, "It's more or less just like a public swimming pool, except you leave off your swimming togs".
Actually it's hotter, steamier and bubblier than your normal run-of-the-mill pool. Also, you shower before you get in, ensuring clean bodies in the pool. I found it surprisingly relaxing and after my evening plunge, decided to make the most of our stay there and go for an onsen first thing in the morning as well. 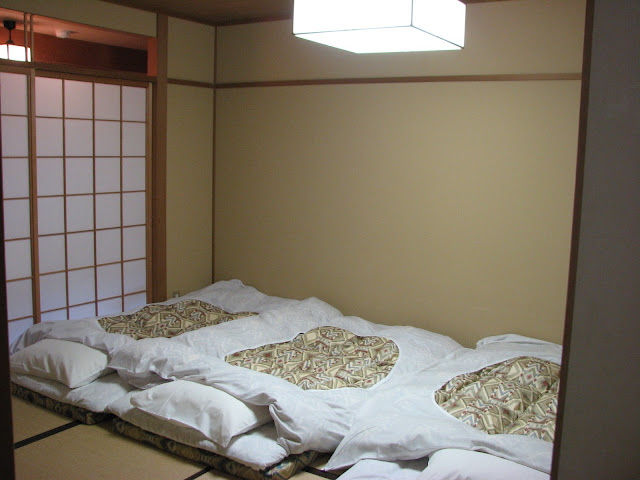 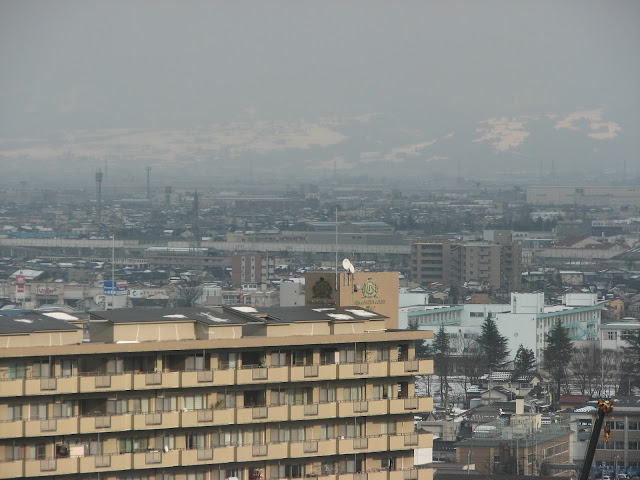 Toyama was cold, misty, grey and rainy the day we were there. We almost had to just imagine the range of bright, rugged mountains it is possible to see from the city on a sunny day. 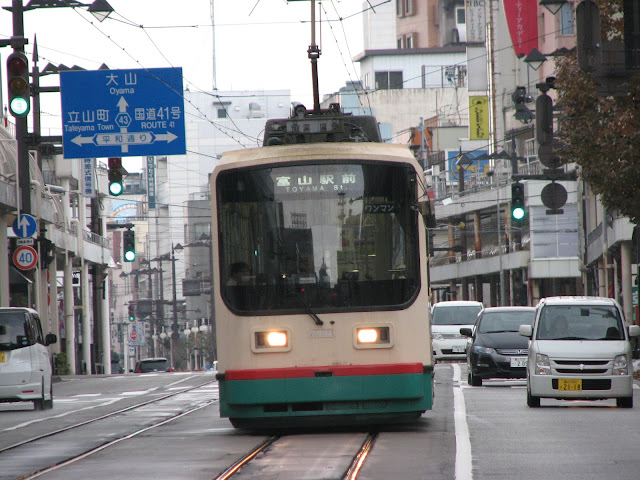 Steve worked in this city almost ten years ago now. I remember at the airport crying because he was leaving. "Don't worry Mum," he said, "I'm only going for a year". Well, it's been about 8 years now ... and counting! 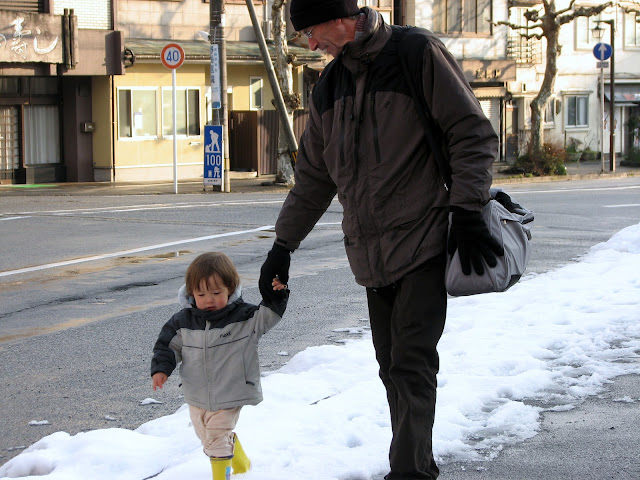 According to the mythology of crows, they teach human beings
how to mix love, humour
and playfulness. 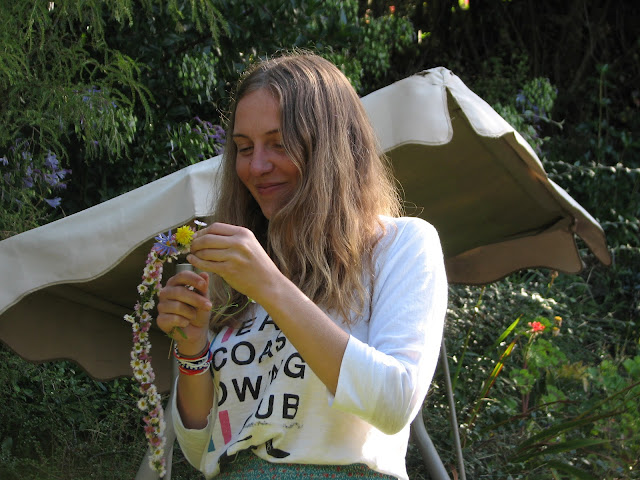 picking up feathers
(for Jenny)
You want to make things
- sew a home-made skirt
from my green pinny, make me
a herb garden - which
you achieved on one of our more
windless autumn days,
before you both left, you and my son
pushing the plants you bought
into earth  - corriander,
parsley, mint and one
you didn't know the English word for

until we got out our English-German
Dictionary, discovered it was rocket;
in German, rucula. You make a chain
of daisies for the van, for good luck.
You want to make feather earrings.
You want to see all
of New Zealand. You were eight
when the Wall came down.
You tell me bits
about your childhood
on the Baltic Coast,

about your parents' old car
a Trabant. A Trabant? I said,
Funny - my Grandad's car,
the one he owned
just before he died,
I'm pretty sure was a Trabant.
What colour was your one?
Light blue, you said. I said, Same!
But they were all that colour,
you said, light-blue
and made from paper.

You walk as light as a bird,
as strong as a lion. The morning
my son and you leave in the van,
I heard your voice as if I was hearing
the voice of a daughter and yesterday
while walking, I started picking up feathers
lost by seagulls in the grass
of playing fields. Only two days
away and already
I have forgotten your voice
how it sounds. How kiwi

your German accent is becoming.
For example how you say 'bed'
the way you hear us saying it.
"I'm off to bid now. Good-night",
you say. Ready for you to make
into earrings, I place the feathers,
soft, grey and white,
on a windowsill where they float
weightless, full of the light
and the distance
of a home away from home. 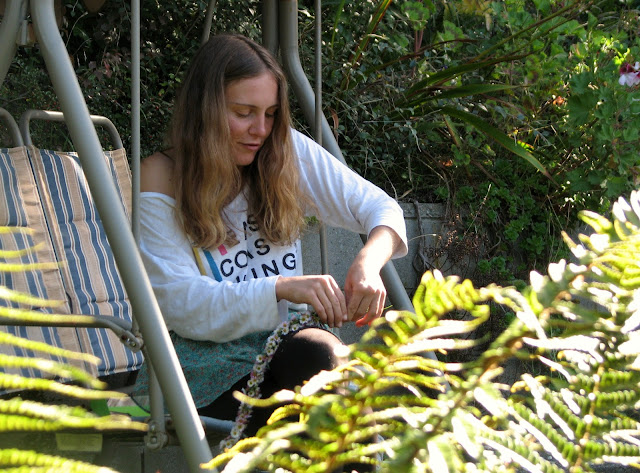 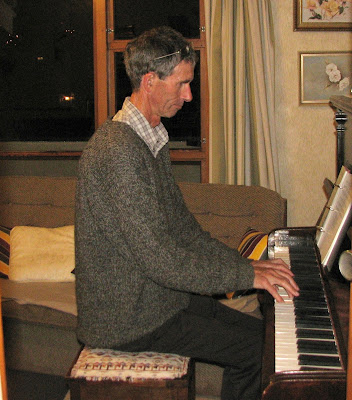 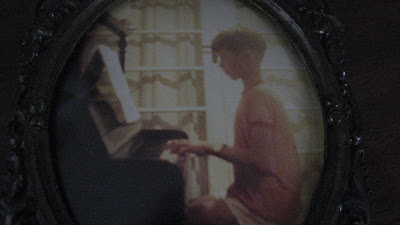