A Birthday in Kyoto 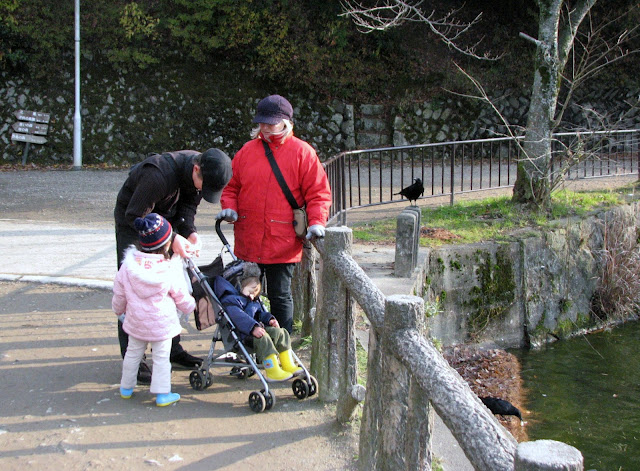 R. asleep in stroller ... Steve sorts some bread for A to feed the ducks. A crow over my left shoulder. (Crows became a motif for me during this stay in Japan. More on that later).

I'm feeling a mite overwhelmed attempting to describe our second stay in Japan, which was almost two months ago now. 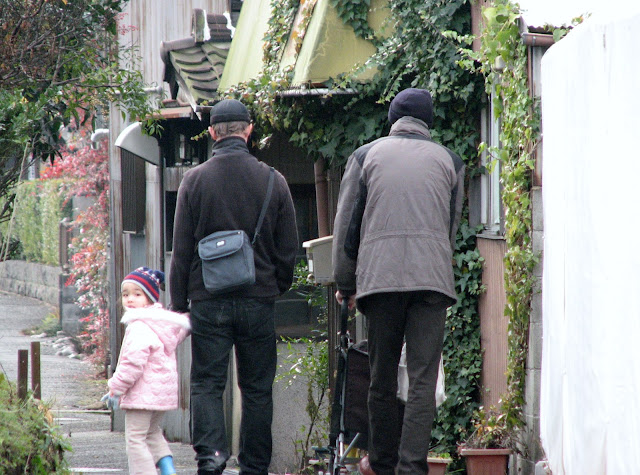 A. looks back at me as I take the photo - maybe she's anxious that I not get too far behind ... or lost. (Not an unusual occurrence for this grandma - especially in strange surroundings).

I have so many memories and occasions to describe. Sometimes, however, impressions and memories need to remain intact; their essence undisturbed. Sharing a memory can remove it from its warm dwelling place; a process of dispersal that risks cooling its immediacy; disassembling and ultimately depleting it. 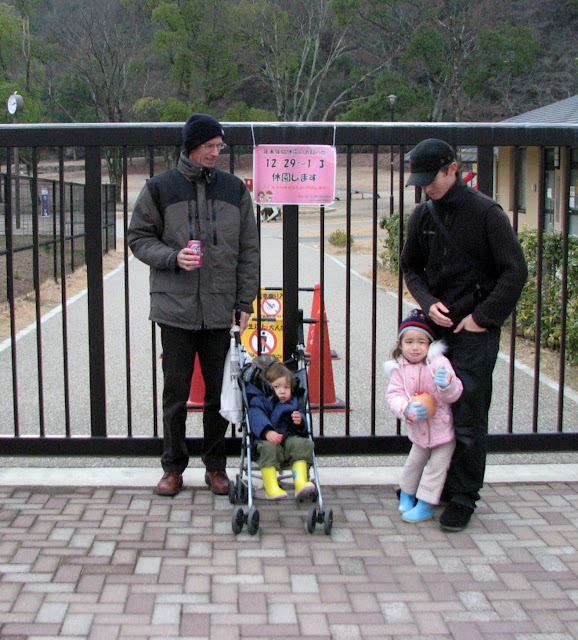 The notice says Playground Closed. (Due to the New Year Break). A. is sad about that and R. in the stroller, looks a fraction disgruntled as well.
NOTE: Robert holding my grape Fanta can while I take the photo. I LOVE grape Fanta - unable to be procured in NZ. I also love that in Japan there is a drinks dispersal machine literally on EVERY corner. Hot &  cold drinks available. (I got used to drinking coffee from a can - surprisingly yummy. As is the warm, tangy, yoghurt-type drink available from these machines).


Some memories however, are robust enough to bear articulation .... like the memory of the first day after we arrived in Kyoto (which happened to be Robert's birthday). It was a cold, grey day - to be expected as it was the middle of winter in Japan - and certainly a contrast to the Thailand-heat and beach-resort setting we'd just left behind. 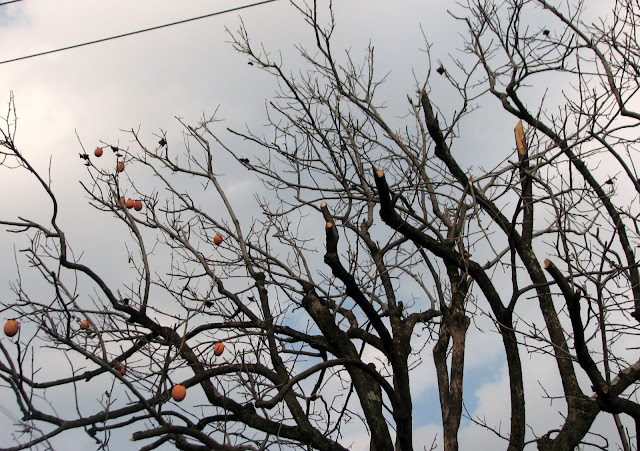 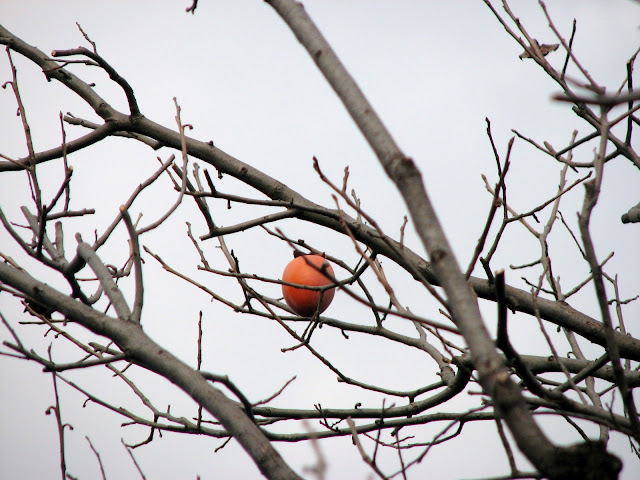 I was delighted to see a persimmon tree, in context, bearing the bright fruit that resolutely hangs on through winter; as described so often in haiku I've read.


Other memories need to be aired because they are at risk of disappearing into the 'Great Forgetfulness' that most of us humans are prone to in the rub of humdrum, everyday life. Photos serve as a trigger and/or locator beam for such memories.

Mandarin ducks with their iconic 'hairstyle and make-up'. 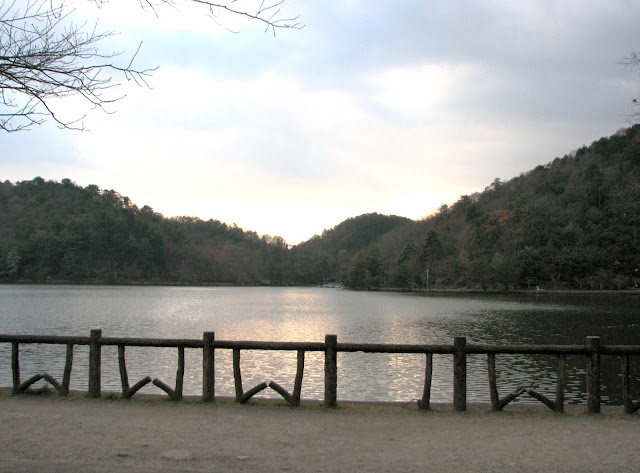 Leaving the wonderful and lovely E. at home preparing a birthday tea for Robert, we walked with our son Steve and the kids to a nearby park and pond. Nothing startling about that maybe, but just being there with our son and grandchildren, doing something ordinary like walking along the road, was perfect. 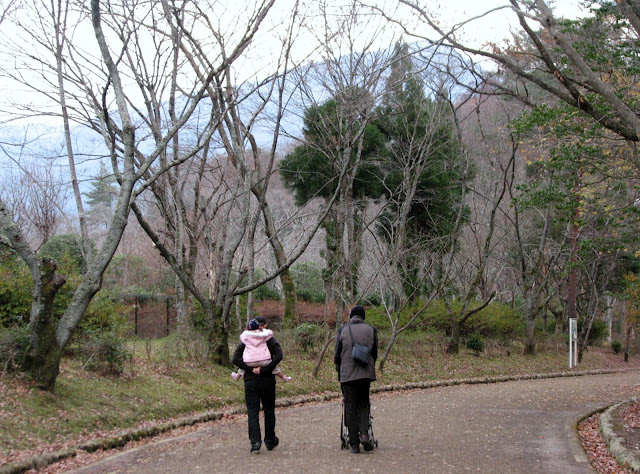 After a stroll part of the way around the pond, the light was beginning to fade. On the way back home we made a detour to a small cake shop to buy a birthday cake for Robert. Once we got it home, cream and strawberries were added. 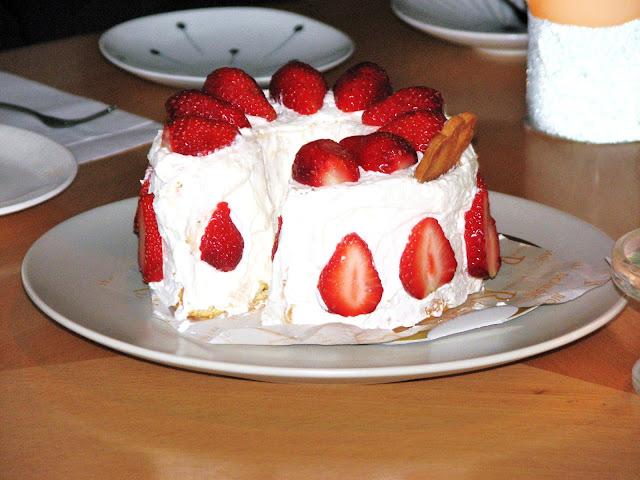 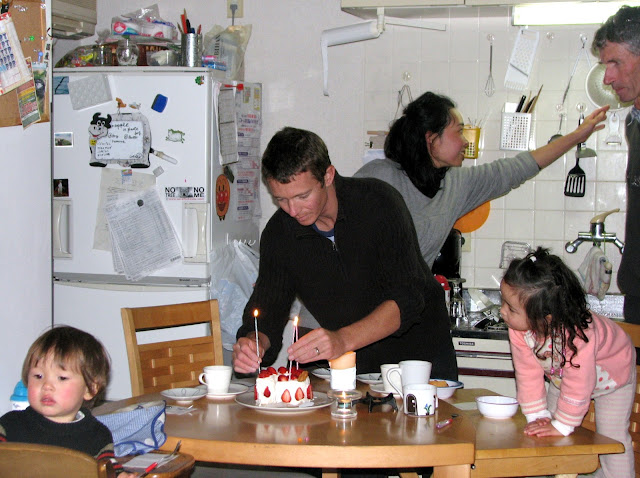 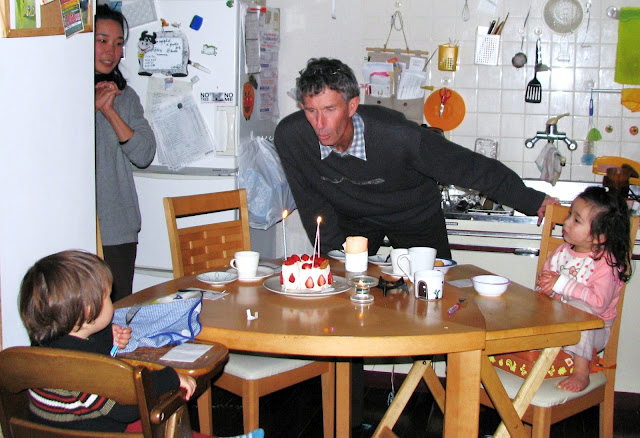 The meal was (as always) amazing. We adore Japanese cooking. We especially love E's cooking. The children were very excited to be celebrating their Grandpa's birthday. They've certainly nailed the 'Happy Birthday' song! 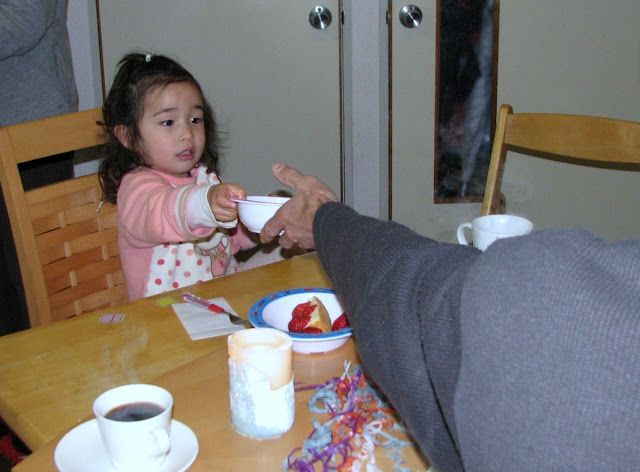 Robert was given a wallet - long overdue and accelerated by him forgetting to take his (shabby) 'old' one out of his pocket when he went snorkeling in Thailand. 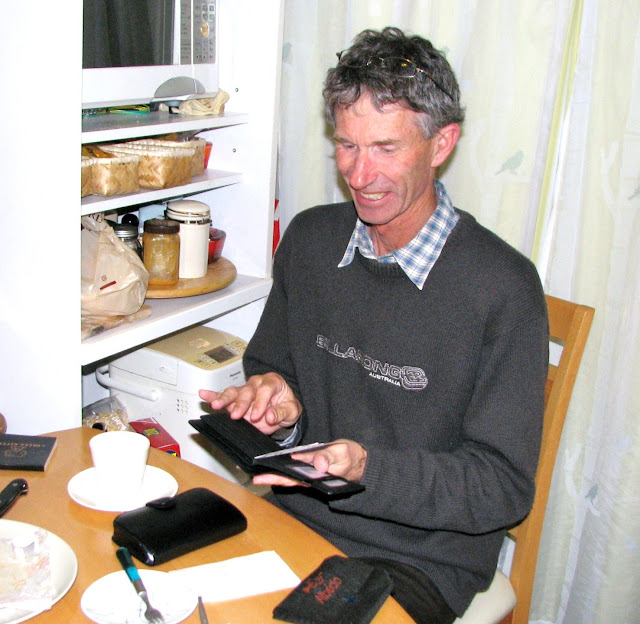 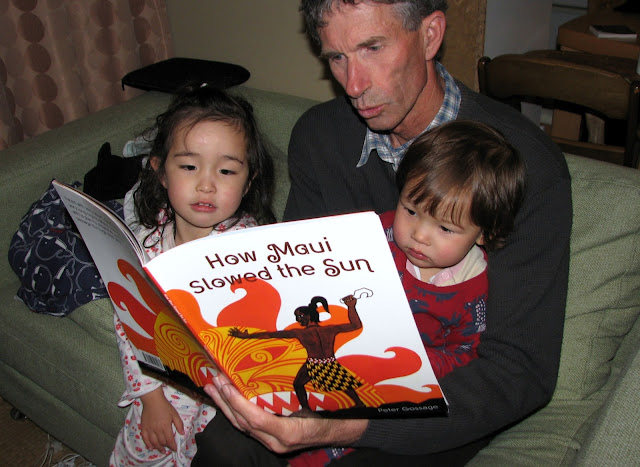 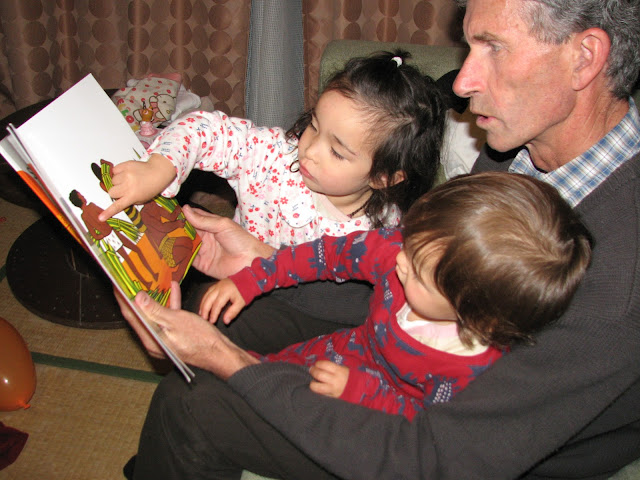 ... and a Maori legend from Aotearoa / New Zealand finishes the day off nicely.

... jumping into the more recent past; a birthday (or birthdays) back home here in Dunedin, and another birthday cake. 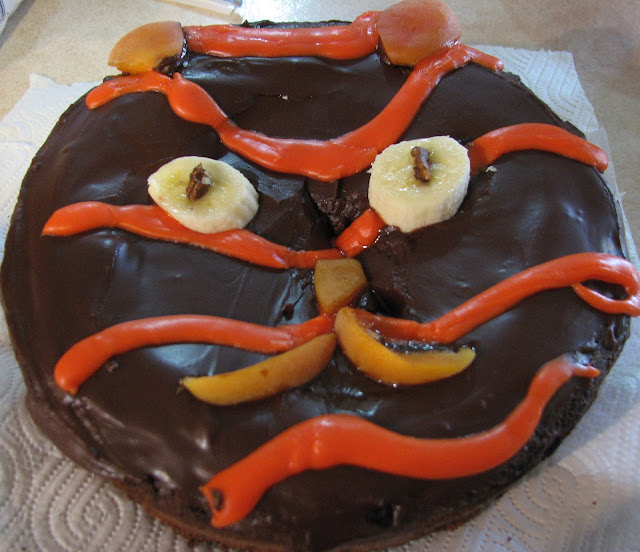 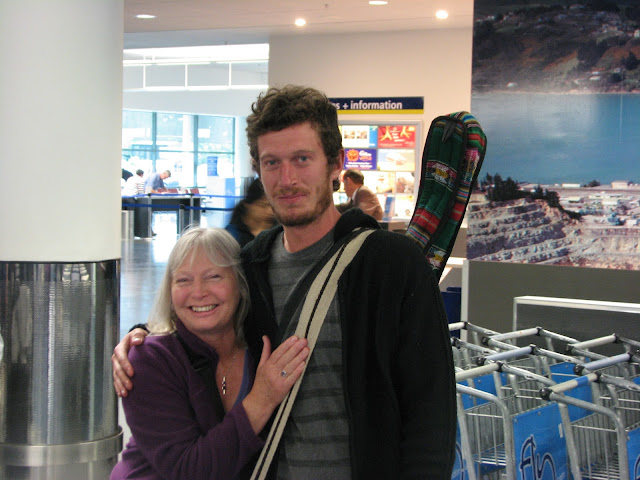 And in other exciting news, our son arrived home from travels and work overseas. Apart from skype-ing, we hadn't seen him for over two years. He hasn't changed a bit. (Except maybe a bit more facial fungus than he used to foster). 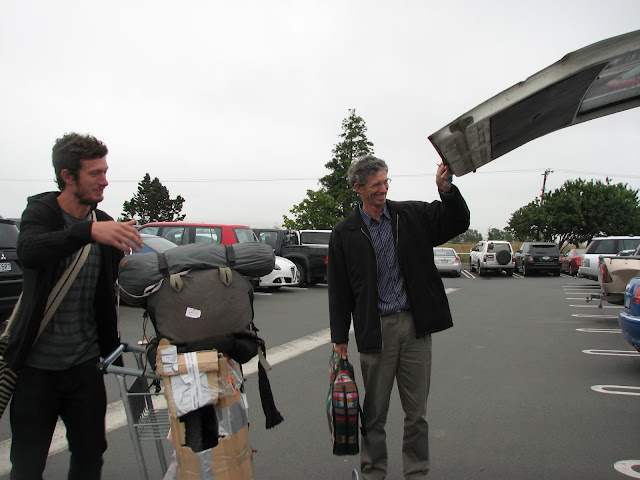 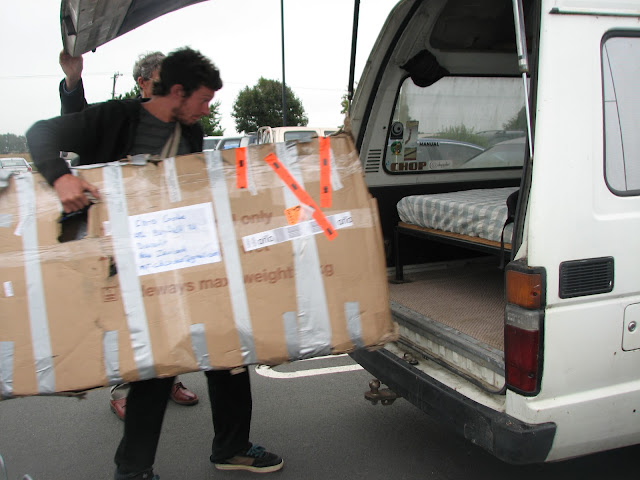 ... stashing his mountain-bike into the back of his van ...

Since arriving home he has chopped up lots of firewood. Unfortunately this has been a necessary act of kindness, because someone left the freezer door open here in Dunedin and our summer (not that it was up to any great shakes) has slipped into a cold, early autumn. We've had the fire going for the past couple of days. 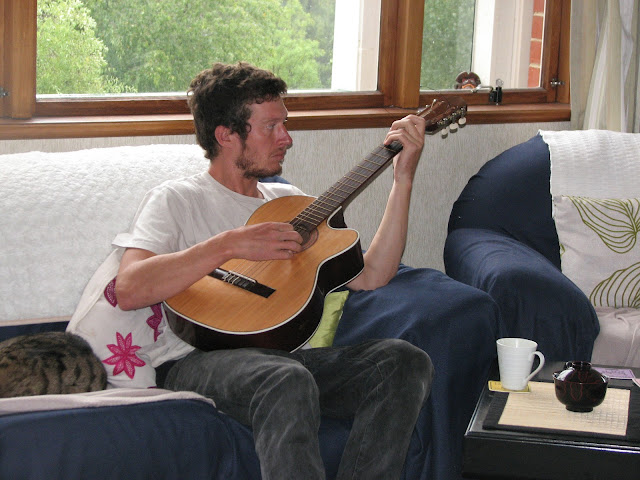 I love the tiger birthday cake. It's cool here too, but no chopping firewood because our chimney no longer goes anywhere since the earthquake :(

Great perspective of a day to remember. :)

This was delicious. Thank you!

apart from the wonderfulness of reading your writings so faithfully and beautifully reinforced by the photos of family and place, I am in love with the ducks....how nose wrinkling cute are they....

your memories shared are delightful...such a lovely family...what special times!

i love the kitchen scenes...they convey so well a wonderful, slightly chaotic choreography of food, family, warmth, excitement, celebration...
thank you so much for posting these dear and intimate photographs.

I like to see your photos of your happy family!

Catherine - :( I trust mending is well on its way for you and for dear Christchurch.

Di - Hi! Thank you for dropping by!

Jennie - I know! Aren't they cool?

Susan - I can see what you mean ... photos like that are very precious and the details found there,ones to pore over in years to come.

Great pictures... love them all. Belated happy birthday to R.

Agnes - Thanks! I will pass on your good wishes to Robert. :)

That's a lovely saunter through your recent memories you just shared. I enjoyed that. Both cakes are making me hungry!