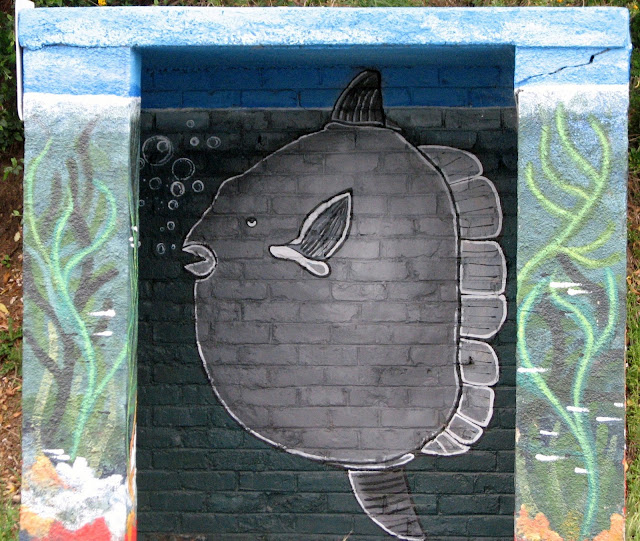 
from wikipedia
Many of the sunfish's various names allude to its flattened shape. Its specific name, mola, is Latin for "millstone", which the fish resembles because of its grey colour, rough texture, and rounded body. Its common English name, sunfish, refers to the animal's habit of sunbathing at the surface of the water. The Dutch-, Portuguese-, French-, Catalan-, Spanish-, Italian-, Russian- and German-language names, respectively maanvis,peixe lua, poisson lune, peix lluna, pez luna, pesce luna, рыба-лунаand Mondfisch, mean "moon fish", in reference to its rounded shape. In German, the fish is also known as Schwimmender Kopf, or "swimming head". In Polish it is named samogłów, meaning "head alone", because it has no true tail. The Chinese translation of its academic name is fan-che yu, meaning "toppled car fish".


There is an enormous, stuffed sunfish housed at Dunedin Museum. (Last time I was there, it was hanging on the wall at the top of one of the stair landings). The museum's sunfish was caught by my late brother-in-law's great-uncle. My brother-in-law was understandably very proud of that fact.

Yesterday we were watching a video of my mother's 60th birthday. It was taken twenty years ago now. So many changes since. (Including my shape - where has that skinny young slip of a thing gone?) I've changed so much since then, even Robert didn't recognise me - and he was there at the time! Over the years since then, I've turned from a minnow into a sunfish.

It will soon be the anniversary of my brother-in-law's death. He was a great father and husband and I know his three girls (my sister and his two daughters) miss him like hell. There is a beautiful wee granddaughter too now, whom he never met.

Life is a mixture. Light and dark. Happiness and sadness. Often all at the same time. Like the warmth and plenitude that the word sunfish conjures on a cool, grey day; the humour too, of a sunfish caught in a cold concrete bus-shelter. 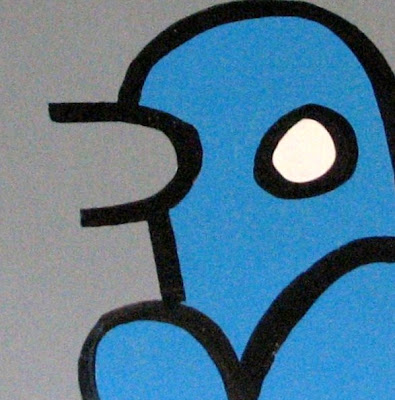 Excited! To be the judge of a poetry competition - especially such a worthy competition as this one that Poems In The Waiting Room (NZ) are running. Go here for the details. Be in, poets!

Patry - Thanks. :) Trust your writing is going well?

Sunfish is said to be a "doctor for fish" in Japan. Japanese name is "Manbou". Both its name and shape are interesting.

Theanne - Thank you. I am a fan of the sunfish.

Love the mola mola on the bus stop - I have a bit of a thing going for fish - purely spectator interest. And all the names for one fish....

Thanks for the competition link.