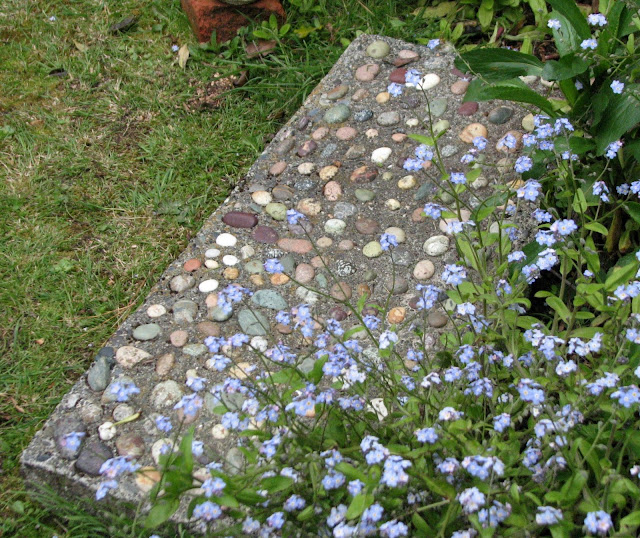 This long weekend (New Zealand's Labour Weekend) just past, I've been looking more closely at the gemstone steps we have in our backyard. I've been looking at each stone, finding pictures in the shadows, colours and patterns.
There is a bit of a story that goes with these steps ... 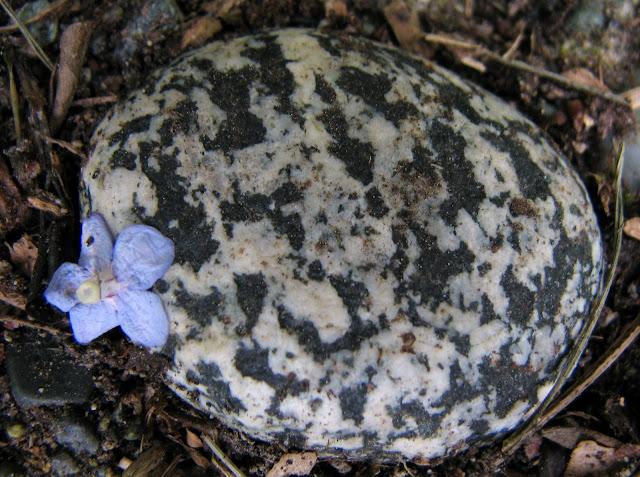 I spent my early years in Orepuki, a seaside town on the bottom of the South Island of New Zealand, which (among other things) is known for its gemstone beach. My father was born in Orepuki and over his many years there - long before Gemstone Beach was famous or even called by that name - he, like all Orepuki kids, collected the coloured pebbles.
I have childhood memories too of picking up the colourful stones (as did my brothers and sisters). We'd take them home and keep them in jam-jars of water, thus ensuring their colours would glisten bright. (That is until algae grew around them, draping the stones with rank, green tendrils. 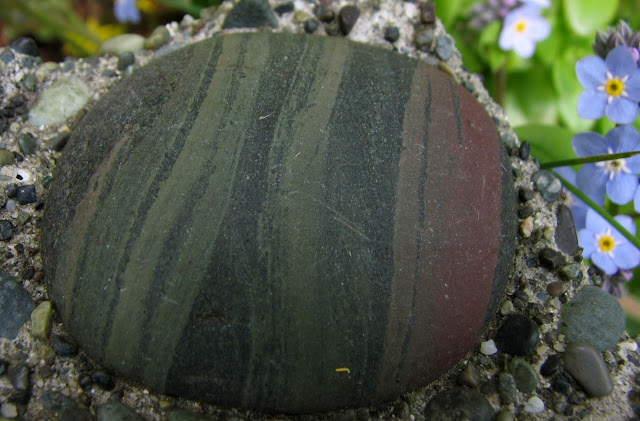 Nearly 60 years ago now, Dad plonked all of his stone collection into the wet cement of the concrete paths and steps he built around our house. After we shifted away from Orepuki the house gradually fell into a pile of rotten wood and the paths became overgrown. 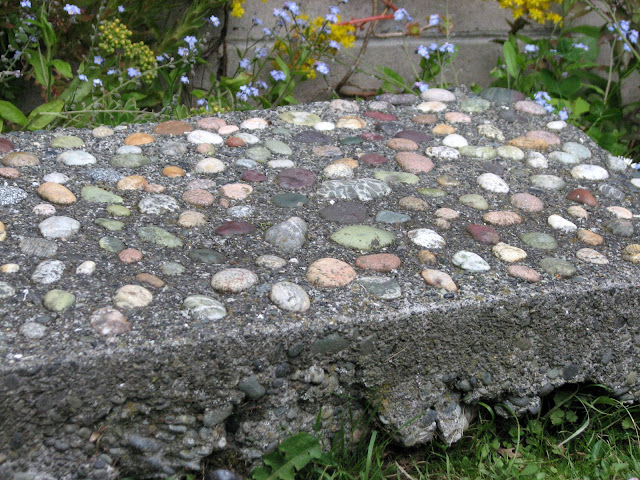 The steps however, were always visible and in perfect order.
I vowed that one day I was going to rescue them from among the thistles and ragwort, and bring them back with me to my home in Dunedin.
About 1991, I wrote for permission from the owner of the land that the steps were on, and during a Christmas reunion at Orepuki with extended family, seconded my husband, brothers and cousins to help man-handle them on to the back of a truck.
From there they travelled to my brother's place in Balfour and then eventually from there to Dunedin - an effort which involved my husband's help again, my brother's front-end loader and the brute force of a friend from Yorkshire to help us carry them up our steps and into our backyard.
I was known as the 'mad sister' for all this effort. They weren't the easiest things to move, that's for sure.
However, it was so worth it. I love this tangible reminder I have of of my childhood home. I always feel close to my father (dead 43 years this Thursday) whenever I take time to sit on them and rub my palms over the smooth, rounded stones.
To me they are gems not so much semi-precious, as fully-precious. Each one tells a story and recently I've been paying attention.
- October 25, 2011

love these gemstone steps. some of the pebbles are like planets in themselves- they tell the story of the universe!

A poignant story, Kay, of more than one powerful connection - thank you. Your father's steps are beautiful x

Fully precious, yes, Kay. And I love image of them overhung by forget-me-nots.

Rebecca - Thanks! And congrats on your baby girl! I'm so thrilled for you. (I like to think we met through the Orepuki gemstones!)

Claire - They are beautiful aren't they? Connections never fail to amaze and bless.

Pen - Thanks. The forget-me-nots make me smile.

I remember that mad, cold day...I think I even got some stones from there as well...only I have no idea where they are now...and I wouldn't be able to find that address on my own :-(

These beautiful stones must be much older than I. And they must have much more memories.

McD - Yes a tomorrow will be a day of remembering (and celebrating a short life well-lived.

Yujinxiang - They are very old stones, each containing an ancient story!

This is quite a story. Thank you for sharing it. And the stones are lovely.

Dana - Thank you. I am having fun working out the stories to go with the stones and getting it down in writing ...

Moving them was worth the effort, right? They look so so so beautiful.

Apart from their intrinsic beauty those stones hold irreplaceable memories, Kay.
All that effort was worth every bit of expended energy!