I took these photos today as I walked at low tide. 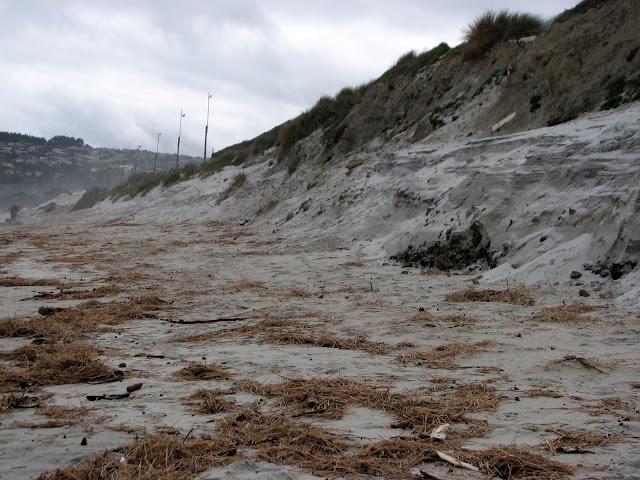 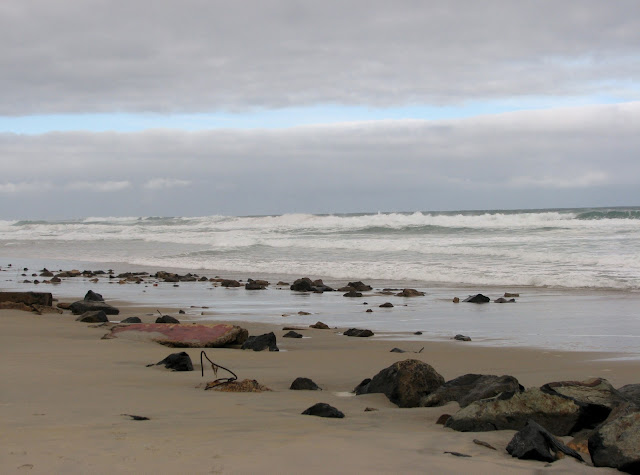 and towards St Kilda ... It was easy to see what the last high tide has dislodged. 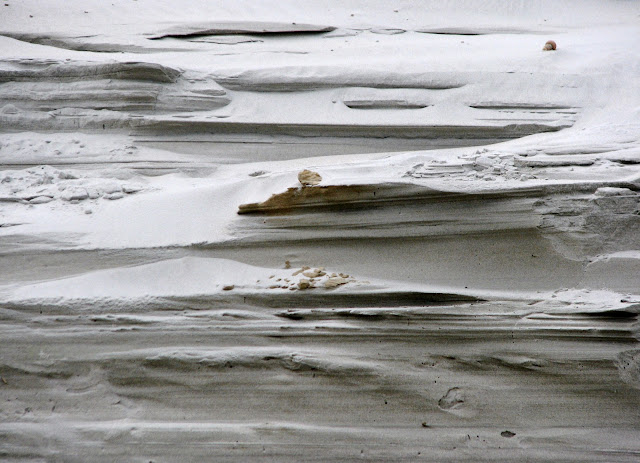 Interesting striations in the sandbanks, where the wind and waves have kicked in. 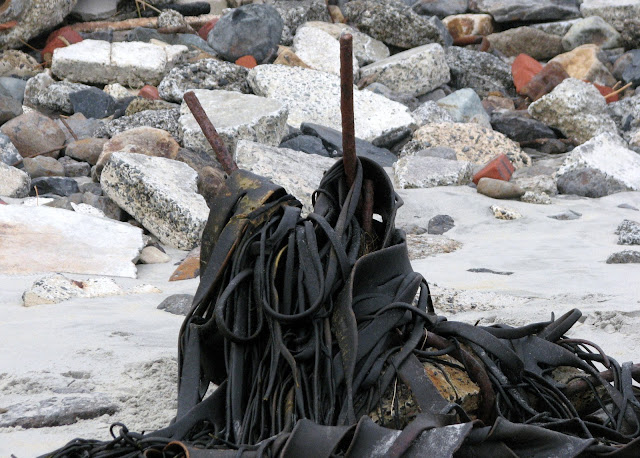 Seaweed draped over old pieces of iron that have dislodged from dunes packed with building rubble and landfill; formerly serving as an adequate bulwark, now coming apart as the sea surges farther inland. 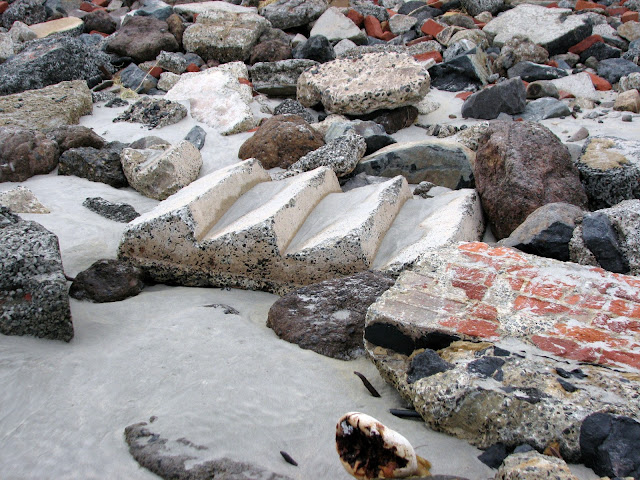 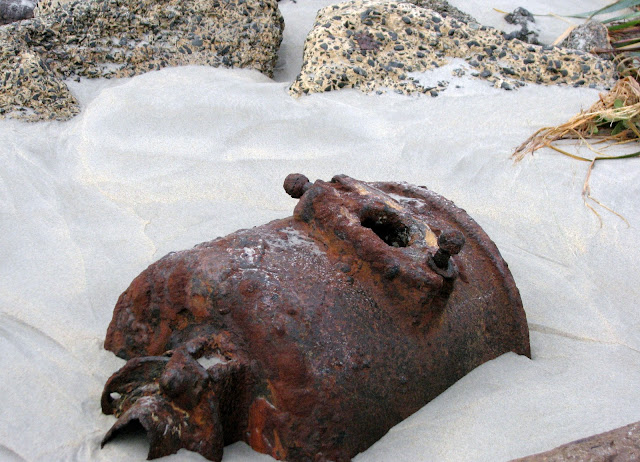 Rusted iron, sinks into the sand. Once it was a useful container for heated metal or water, then it was discarded to serve as part of the rubble used to bulk out the land-fill and reclaimed land. Today it lies useless, corrupted by air and salt-water.

(Maybe by taking its photo, I have redressed the balance a little and given it back some usefulness). 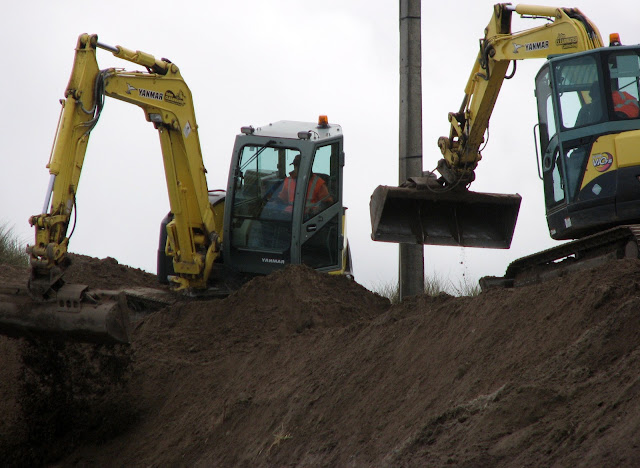 Stirling efforts are being put in by these two yellow diggers to try and restore some of the bank. The grey concrete pole is part of the lights for the Southern Rugby Club's playing fields. The lights have been severely undermined and are close to tumbling.

Not so long ago they were part of the rugby grounds themselves, not teetering on the edge of the cliff-edge. They are tangible evidence of how far the sea has encroached. 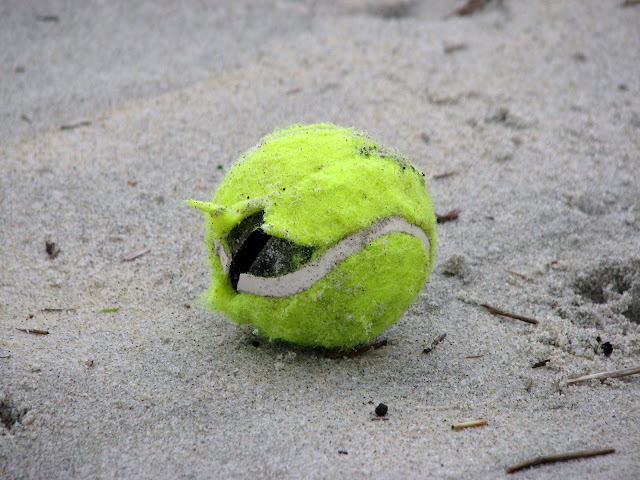 Munted tennis ball. This gutted tennis ball lying exhausted on the beach made me laugh. (My son Steve will know why). It's a long way from Japan to here!

I just had to bring it home - you never know Steve, it may just find its way into that parcel we're getting ready to send to Japan! 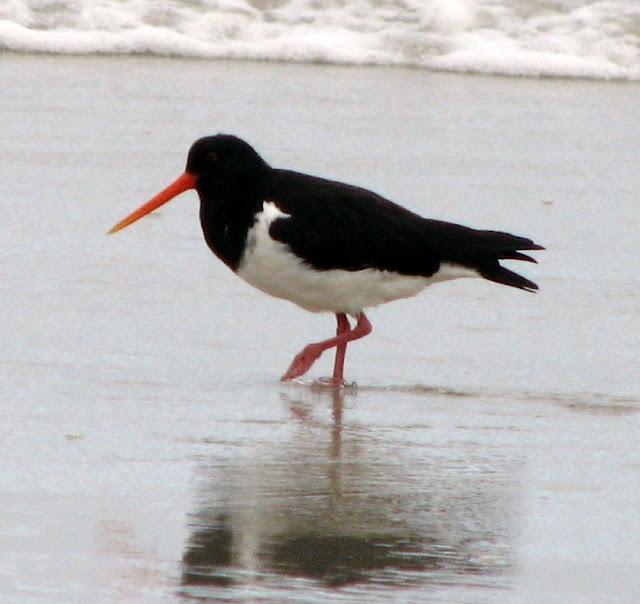 This oyster catcher has no worries as it forages and paddles at the tide-line. It is just doing what it was designed to do.
- October 04, 2011

My goodness, beautiful photos. Steps leading to nowhere? I'd love to follow those steps :-)

I haven't been down to the beach for awhile, so the extent of the erosion came as quite a shock.
Great photos as always, Kay. :)

Thanks Agnes. The steps certainly looked a little bizarre!

Thanks Sue - yes it's a little disturbing to see how far the sea has encroached recently.

I'm glad to see a tennis ball from Japan and to hear it can come back here. :)

yujinxlang - Well ... it's a fantasy really - I think the ball is more likely to be a NZ one, but I like to imagine it swam / floated all the way over here from Japan! ;)