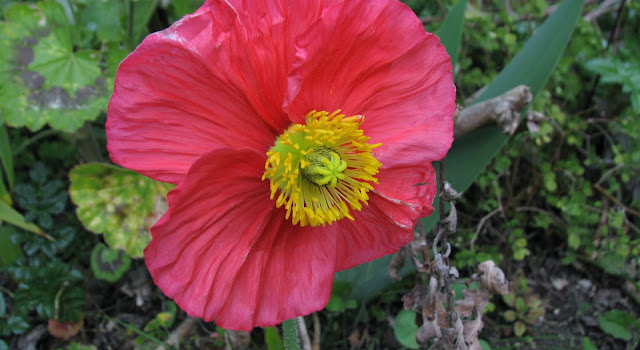 Spring, as always, fills me with a combination of positivism and dread. Positivism because the earth feels lighter, warmer and a lot more colourful. Dread, because the containment of grass and weeds means a term of hard labour is ahead.

Spring also means the air around our place becomes alive with birds - mating, nesting, feeding, singing - they fill the day with a chirpy, musical undertone. More often than not when I am home alone, I prefer a silent house with the radio and /or music off. This means that on days like today I am aware of continual bird-song and birdy busy-ness punctuating the air, creating a cheerful, chirpy murmur and hum through my day.

New Zealanders love their birds. For example, the talking tui called Woof Woof, who sadly died at the beginning of this year. He was aged 16 years and lived in a bird sanctuary in Whangarei, in the North Island of New Zealand. Video clips at the bird sanctuary's site show this remarkable bird talking in a perfect copy of the voice of the sanctuary owner.

I wonder if a local tui I've nick-named Don, and which at the moment is paying regular visits to our kowhai trees (but ignoring the sugar water that the little wax-eyes are going for) will start mimicking me if I talk to it enough?

Apparently, as well as the usual clicks, creaks, clucks, chortles and bellbird-like chimes in their song, tui also have notes higher than the human ear can pick up. Observers know this because they have have noted what appeared to be gaps in the tui's song, even though their beaks were open and their throat muscles were still working.

Another piece of information I found out about tui is that they have been known to sing at night - especially at the time of a full moon. The moon is on its way to being a full one soon; I will be keeping an ear out for Don's singing. (It might even include a bit of a yodel, you never know).

I thoroughly enjoy the tui, the waxeyes, bellbird and other native birds that I see around here; so much so watching and noting them from the window in front of my desk, interrupts my writing; yet my favourite bird remamins one of open spaces, the skylark, an imported bird.

Described as 'a favourite of poets'; an 'extrovert bird with secretive ways'; a 'drab bird with a soaring song', the collective noun for these birds is 'an exaltation'.

A few centuries ago, in Britain (and Europe?) they were caught for the pot. But what has mostly caused the decline in their numbers over in the UK, has been the change in farming methods, with dense crops of wheat not allowing them to freely scuttle the ground to forage, and (maybe) to nest. To allow the skylarks better foraging access, farmers who grow wheat are encouraged to interrupt the flow of seed for about five square meters, thus providing spaces of wheat-free ground, called skylark plots. (The writer in me likes the sound of 'skylark plots').

When I hear a skylark, I am reminded of the freedom to sing 100 meters above the earth and the existence of bliss.


Each morning the tui
blats it, like an accelerator
pressed to the floorboards.
It is a bird that means business
in a tree, at its throat

a tuft of snow-flake
white and all the sounds
one world can contain.
By afternoon it has left
the trees, the air, emptied

reclaimed, one skylark
leaves the earth, high and dry
to soar lost in its own shrill blue
song as if forever searching
in sheer amazement.

Spring there, summer's end here. I loved your post reminding me of my own joy at the awakening I loved some months ago. As chance would have it, my visit here today was not only to read and enjoy but to cross-reference you with the blog of a fellow New Zealander, Pohaniginapete, who has delighted me --as you did with this post--by introducing me to the birds of New Zealand and much more about your wondrous land. His latest posts are from Ecuador, traveling there, and his post dated Aug. 15 describes his first hummingbird. I do think you two should "meet," if you have not already done so.

Your poem was an exquisite gem to begin my day. :)

I keep forgetting that it's Spring down there :-)

Another great post and poem.
I love our birds too. We have plenty here and I like a silent house when I'm writing as well. We also have rosellas in the wild in this part of town. Their bright red and blue plummage look clownish to a Kiwi's eyes.
I'm off to google sky larks. I don't know anything about them and had no idea they lived here!

Lydia - Thanks for link! And for liking the poem. I have heard of Pete before and read some of his posts - I will have to 'follow' him! (One day we may meet - it's a bit like that in NZ; not many people here, helps).

Sue - Hope you enjoy looking up skylarks - I heard some on Friday when I walked along St Kilda beach - above the sand-dunes there.