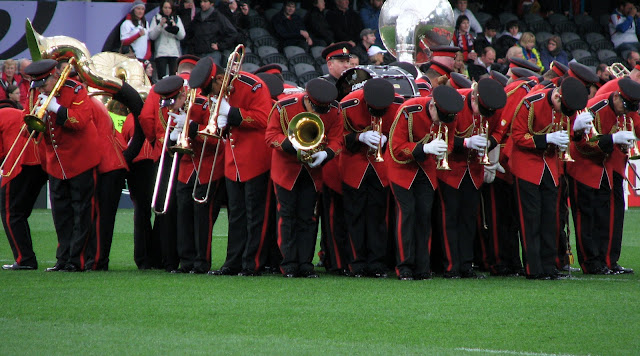 I can't even think the phrase, "I do love a brass band" without hearing it said in a northern English accent (perhaps the way my great-great-grandfather from Huddersfield would have said it). But we weren't at the new Dunedin stadium to hear the brass band, 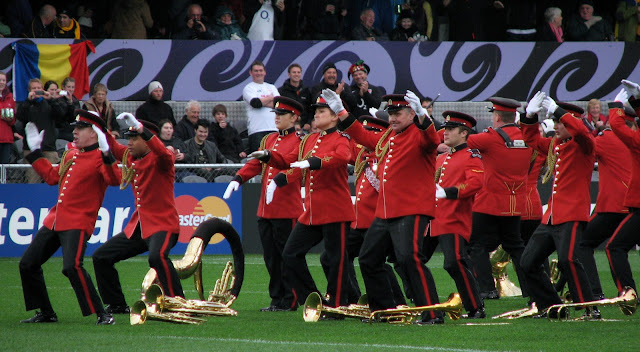 who (oddly enough) at one stage, performed a haka ... 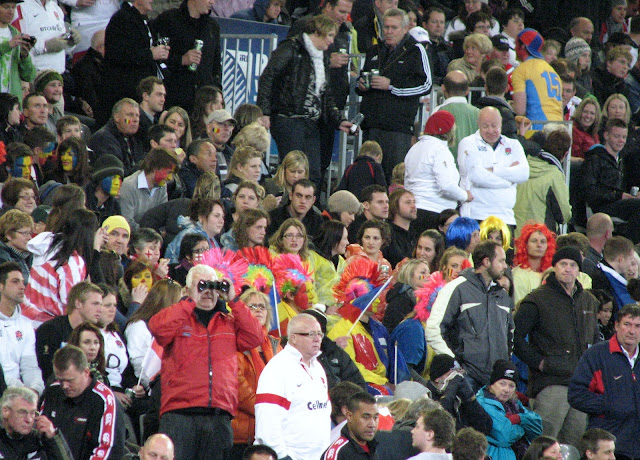 we were here (along with this lot) 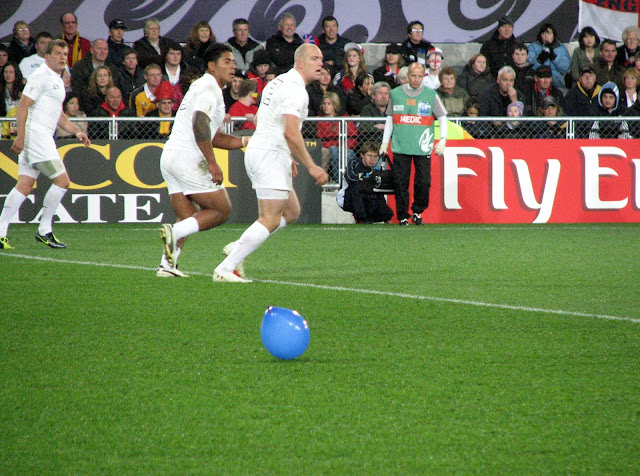 not to watch an errant blue balloon 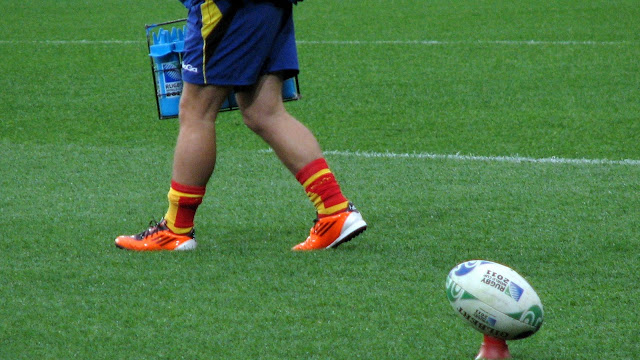 or even to discuss the merits or de-merits of the latest footwear fashion in rugby boots, 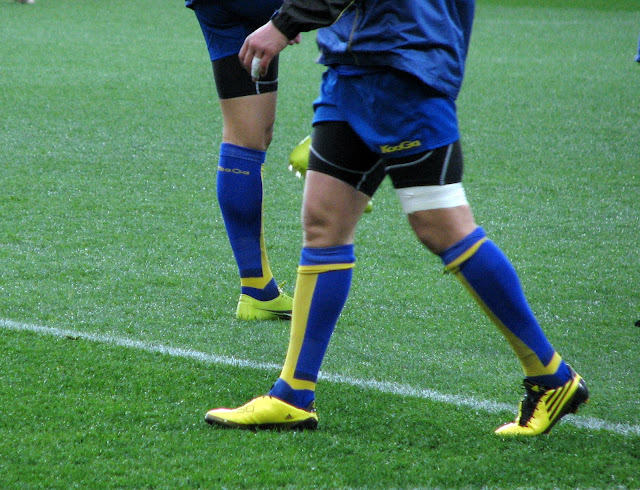 (although, on that subject, I like the bright boots; I find them very spec. fic. Tim Jones will know what I mean). 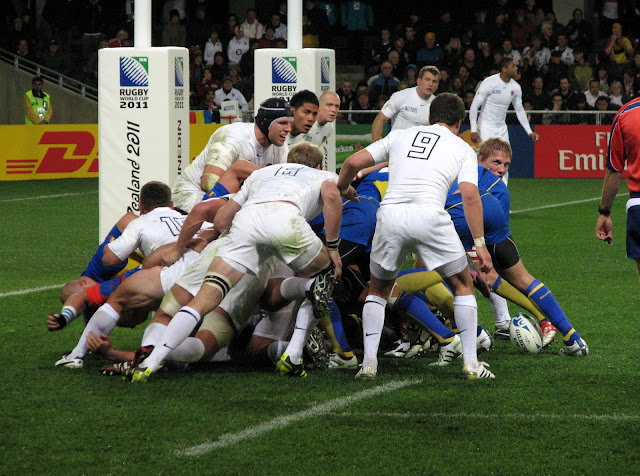 We were here to watch the rugby. (Parts of which was very watchable).

We were watching England versus Romania (or Rumania ... apparently both spellings are acceptable). 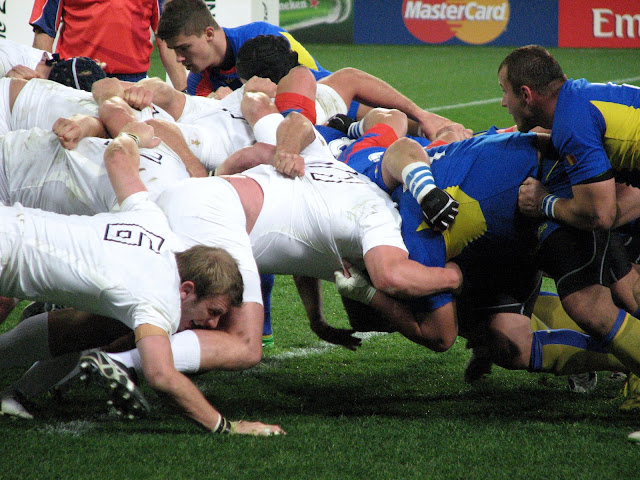 Despite both Robert and I having English ancestry, we weren't supporting any of the two teams. 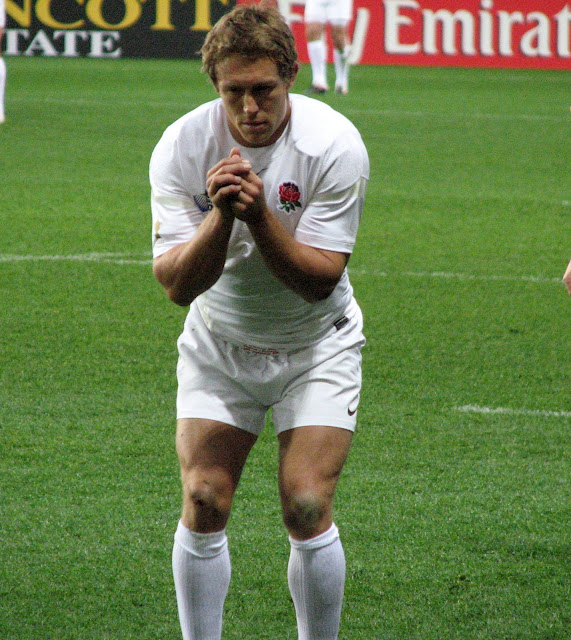 We were just there for the occasion.

As I say, some of the rugby was very watchable ... as above. (English kicker, Jonny Wilkinson in his customary 'prayer position' before kicking for goal). 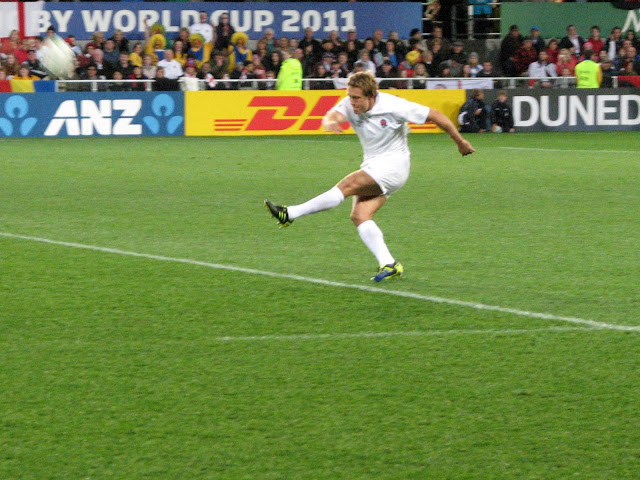 England won. By a lot.

This is our second attendance at Dunedin's new stadium. A new stadium that is costing Dunedin ratepayers a lot and for that reason, a lot of Dunedin citizens are agin it.

But it's here now, so in order that it not become a white elephant and to get our money's worth, Robert and I are happy to go along to events and enjoy the benefits of a covered stadium. (We were very grateful for the roof last night when a bitterly cold and wet southerly blew in).

New Zealand is hosting the Rugby World Cup at the moment. As a nation, we are fast becoming au fait with bunting and flag-waving. Rugby Cup fever has hit the whole country.

Some people I know aren't happy about all the attention rugby is grabbing. I wasn't sure how I felt about it, but I find myself enjoying the excitement because after two major earthquakes, a mining disaster and other bad things that have happened to our small country recently, we need the bolstering and energy that World Cup fever is supplying.

Before the match, we spent a bit of time in the centre of the city where the atmosphere was one of celebration and 'party mode'. The same is being reflected around other NZ cities. I heard that earthquake-ravaged Christchurch was also getting into the spirit at the rugby centre set up for them in Hagley Park. 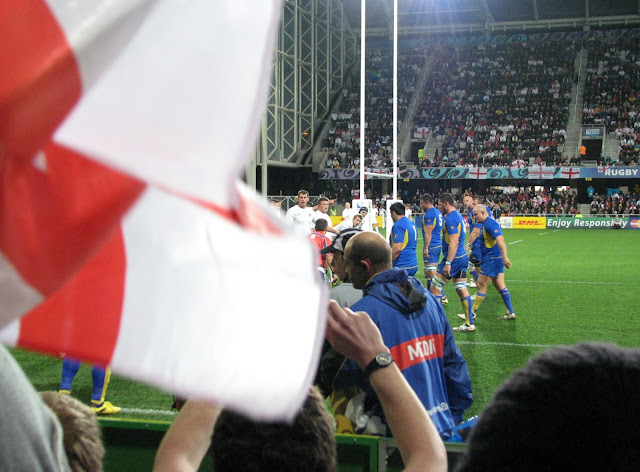 Last night though, I could have done without the English St George cross being waved under my nose by the rabid (and very loud - I am talking Town Crier proportions) English supporter sitting next to me.

I am not a rugby fan per se, but there is enough history of the sport flowing in my blood from rugby-loving ancestors (on both my mother's side and my father's) for it to rise and take even me by surprise. 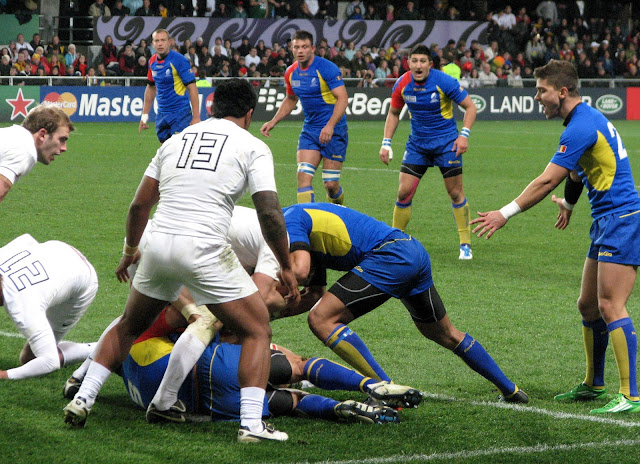 After coming home from the Eng. v Rom. game last night, Robert mulled us some wine and we watched (on TV) the All Blacks (New Zealand's national rugby team, so-called because of their all-black uniforms) beat the French. It was a revenge game they have waited 4 years for, and it was very, very sweet to watch the AB's win in such a convincing and poetic manner.

Whenever I engage with the game of rugby (not so much with its culture, which is another story again) I feel close to my rugby-loving ancestors (Scottish, Irish, Maori, English). If only for that reason, I do not object when the rugby fan in me wants to come out and play.

1 cup flour
1 teaspoon baking powder
1/2 cup sugar
1/2 teaspoon salt
1/4 cup milk
1 egg
Mix together into a batter. Place in spoonful amounts on to a hot base of frying pan or skillet that has been rubbed with butter.
When the bubbles formed on the surface of each pikelet begin to pop, flip them over.
Makes about 10.

We ate them with butter and 'McDinzie's Wild Blackberry' (my sister and brother in law's home-made jam).

Despite the Fanzone in Hagley Park, I think the celebrations here have been rather subdued. People are much more interested in when their insurance claims will be processed.
Although there is still a certain amount of rugby fever about, for those so inclined.
If your stadium is an expensive white elephant, think about ours - only built for a few months, and about to be pulled down, probably!

Catherine - I don't think of our stadium as a white elephant ...but I've heard some prophesy that it will be. However I doubt it very much. Maybe stadium opponents need to think about poor old Chch's situation.