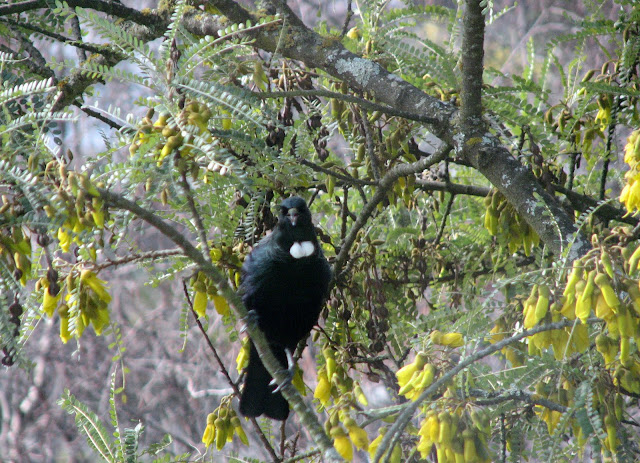 I'd swear he was looking right down the lens. How mischievous. I think I'll call him Don.
Today this tui visited the kowhai tree outside my writing room window. It often visits, but today on Father's Day it was special because tuis are one of the things I associate with my father.
*** 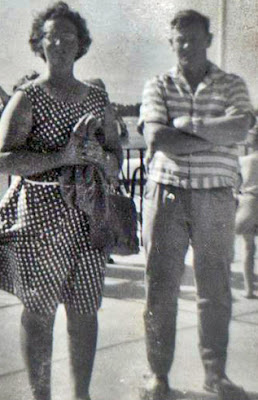 I have one memory of a Father's Day when my dad was alive. I was aged about nine years old and I'd raced out to the gate where he was just getting down off the tractor after arriving back from the farm. (I realise now that it would've been the middle of lambing season, a busy time for farmers, so that is why he was working on a Sunday).
I was keen to wish him happy Father's Day.
His response has always remained with me because it was so unexpected.
"Commercial rubbish," he said.

No doubt my face reflected a "Wha'?" kind of expression. I had no idea what he meant.
I either found out then, after he probably explained (he was always a good explainer of things) or later, that Father's Day had really only recently (I am thinking back to about 1962) been 'invented'. Shops liked it because it was good for business, or so people said back then.

Mother's Day is a more traditional celebration (it used to be called Mothering Sunday in Britain) with a more ancient history. Whereas Father's Day's history is a more modern one.

It wasn't part of my father's upbringing, so he didn't really take to it as an occasion. I think I can remember a packet of lollies (licorice all-sorts) being involved in the incident I describe above (no doubt his Father's Day present). I hope he was grateful for them! 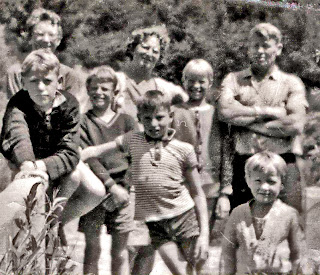 I like to honour my father (whether he'd like it or not) on Father's Day. If it doesn't sound too Irish, he would most likely be dead now, if he hadn't died when he was 48. (I can hear him sniffing with laughter, me saying that!) It will be his 91st birthday tomorrow ... if dead people still have birthdays? 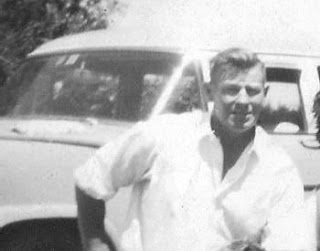 I've written as many poems about him as I think I am ever going to write now. I hardly ever have the dreams that I used to have about him - dreams of him coming back to be with us again (resurrected?) but changed. In the dreams he was wan, sickly, remote, self-involved and a pale imitation of himself. He didn't remember who we were and had no desire to connect with us. They were horrid, unsettling dreams that seemed to symbolise ultimate betrayal and desertion; no doubt exactly what a child feels when a parent dies too soon. 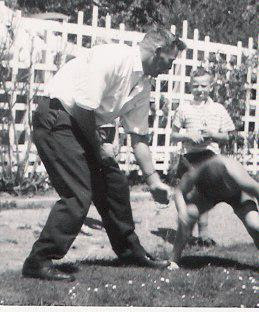 However, in my waking life, I often have a sense of him around - what I have inherited of his sense of humour, colours things I see and hear. He shows up in different aspects apparent in my daughter, my sons and grandchildren ... My siblings also manifest parts of his personality.

During my recent visit to Wellington, I was lucky enough to attend the poet Joy Harjo's lunch-time reading at Te Papa. When she was asked by NZ writer Patricia Grace who, or what, she considered to be her muse; or as Patricia put it, "Who sits on your shoulder?" Joy Harjo replied that her ancestors were a vital part of her creative pursuits, and life in general.

I know exactly what she means. I too would consider my ancestors to be with me, part of my work and inspiration. They abide lightly, supportively and, sometimes, mischievously.
- September 04, 2011

gosh were we really that young....Happy Fathers day Dad....even if you don't want it :-)

Kay,
Memories like those of your father are what keep us grounded,I think.
My dad would have been 91 this past Feb.
I think of him less these days some 33 + years since his death.

He was a laborer, a writer and a songster. More then anyone, he is my muse.

Happy Father's Day to your dad and to your Robert.
rel

I really enjoyed reading this and looking at the pictures. My dad died in 2003, aged 87. My daughter took me to brekkie at Modaks and asked me if I ever thought about my own dad. I admitted I didn't often, but (though I didn't say this) I'm aware that when I do, it's good for me.
Thanks for this - and I really enjoy your blog.

McD - Yes we were that young ... hard to believe. And yes indeed - Happy Father's Day, Dad.

rel- Thanks for your comments. Lovely to read the sentiments you've expressed re your Dad. My Dad was a bit of a songster as well ... Glad you have your father as a muse too. Thanks for Father's Day wishes - I passed them on to Robert.

John - Thanks for kind comments. I like the way you say that when you do think of your father, it's good for you. So true.

how lovely to have the tui visit on Father's day,