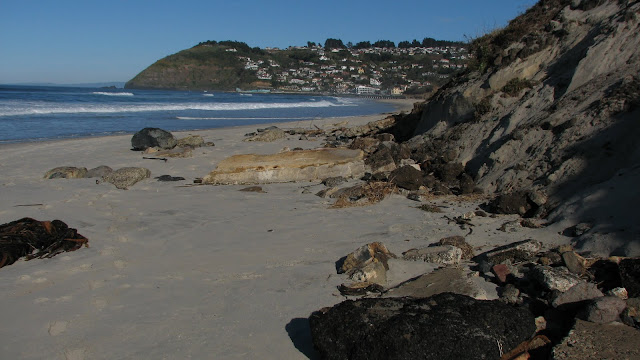 Friday's walk along the beach revealed a spring tide had been at work, high waves washing into the reclaimed sand banks and plucking out chunks of material used to bulk up the barriers set when land was reclaimed. 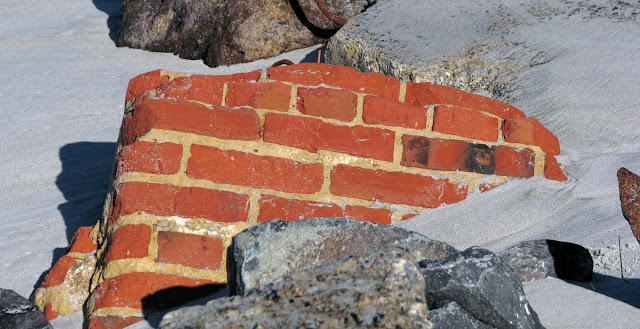 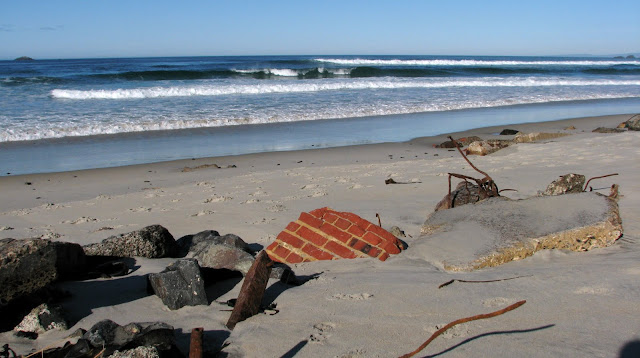 The sea appears determined to take back what was once its right - to roam inland and relax into estuaries and swamps over the flat land around Dunedin and its coastlines and harbour. 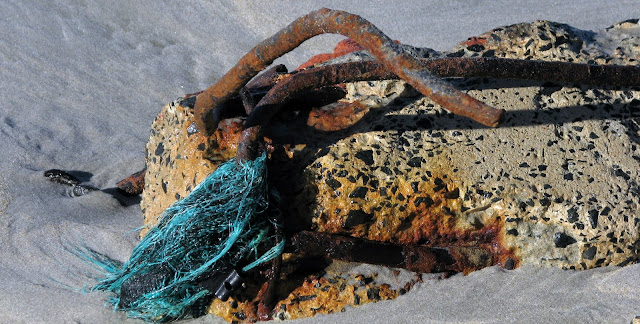 All along the beach, detritus and rubble lay as evidence of the sea undoing the dunes at high tide. 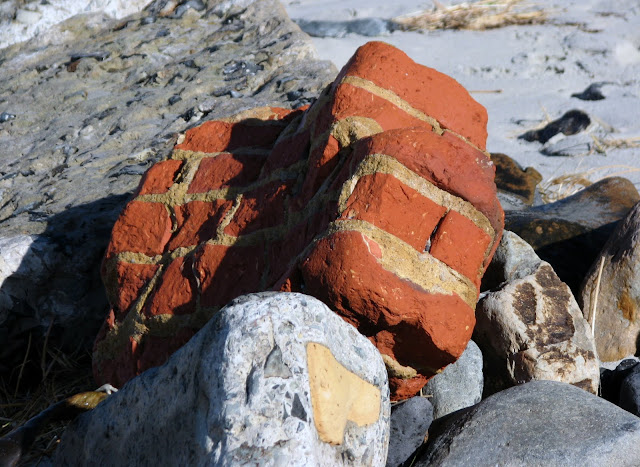 Saturday, we set off early for Christchurch for a niece's 21st birthday. We set off early because we drove up there in our son's van (it needed a run after months of just the occasional 'about town' outings) and as it is very slow on the hills, we wanted to start off when the roads were relatively empty.

I call the van Big Bertha.

'She's slow and thirsty, but she'll get you there' is how our son describes his machine. He's in Chile at the moment, so we are its custodians.

Before the 21st that night, we had time to look around the tattered and battered inner-city part of Christchurch; the after-effects of the two major earthquakes it has suffered.

It is one year since the first earthquake and six months since the second one. The first earthquake happened early hours of the morning and no lives were lost; although there was a lot of damage to buildings etc. The second one happened in the middle of a working day in February, and it took over a hundred lives. (Note: there have been thousands of earthquakes / tremors/ shudders since the first one in September 2010, a lot of of them sizeable and frightening and causing even more damage). 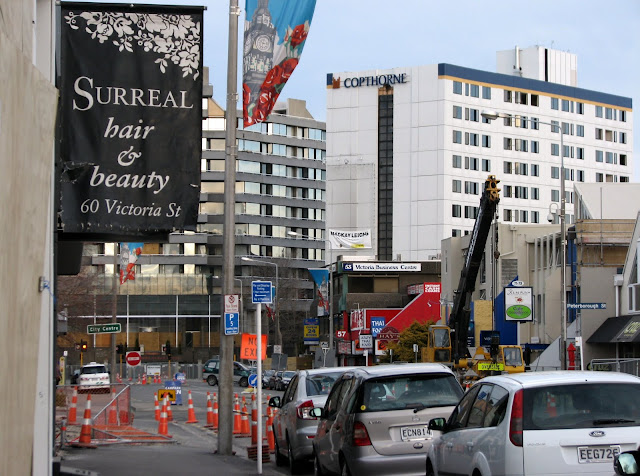 Surreal was indeed how it felt, walking around the outside of the fenced areas. The silence was eerie and cold.  Much of the city was un-recognisable, not just because of the damage, but because many high buildings have been torn down, altering the sky-scape and street-scapes of Christchurch forever. 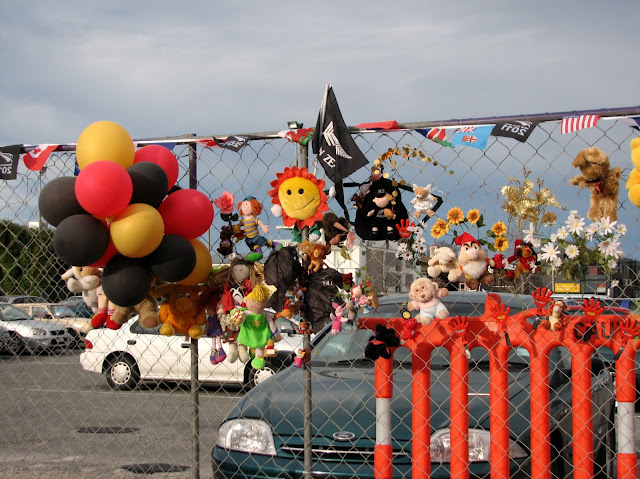 It was hard for me to be certain, but I think this space was where an early childhood teacher training building once stood.  I attended a conference in that building about ten years ago.

The thing you instantly notice is all the space from where buildings have been knocked down. Christchurch  has gaps, as if it has teeth missing. It looks like a building site and very far removed from the previously tightly packed cityscape of businesses and buildings found in what was a thriving city.

We were told by family living in Christchurch, that many more buildings were still to be torn down, including the two large hotels in the photos below. 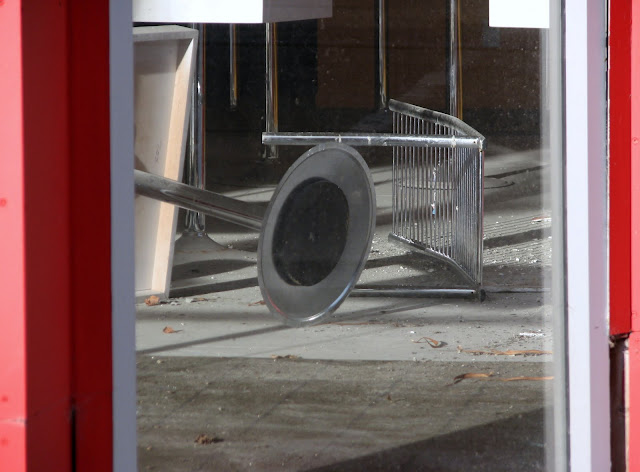 Things have been left exactly as they fell on the day of the second quake - February 22nd. When I looked inside shops, things inside are covered in dust. There is a sense of time stopping. 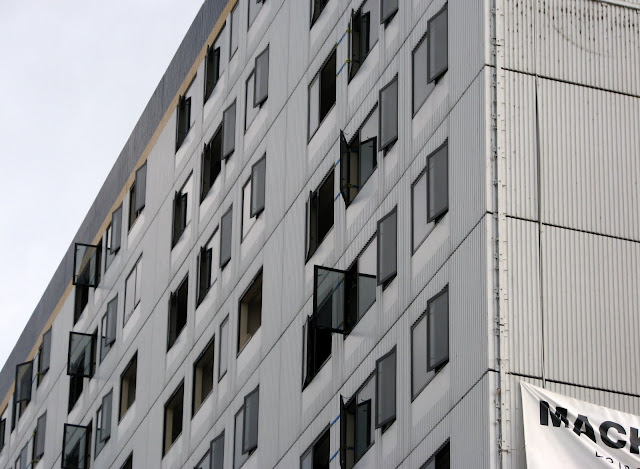 It was unsettling to see abandoned hotels with shattered glass, windows wide open and curtains billowing. 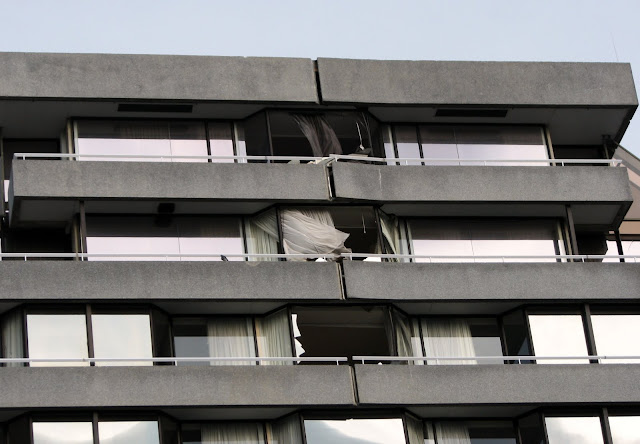 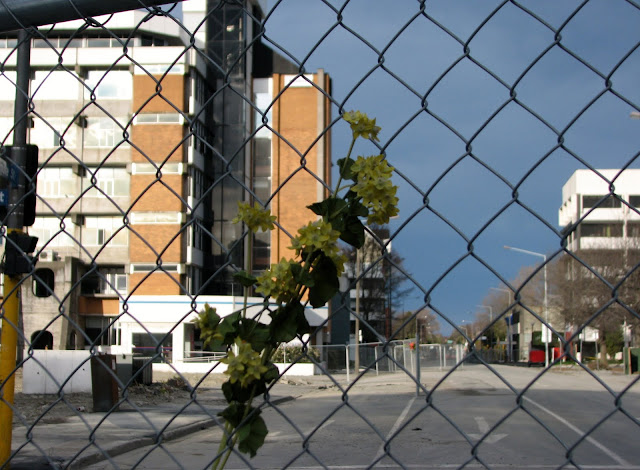 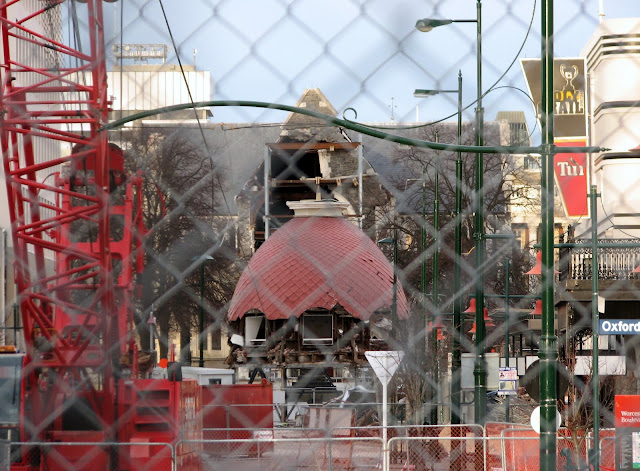 Perhaps the biggest jolt of all, was looking through a wire fence down what was once a beautiful, tidy view of the city's cathedral, only to see the shattered remains. 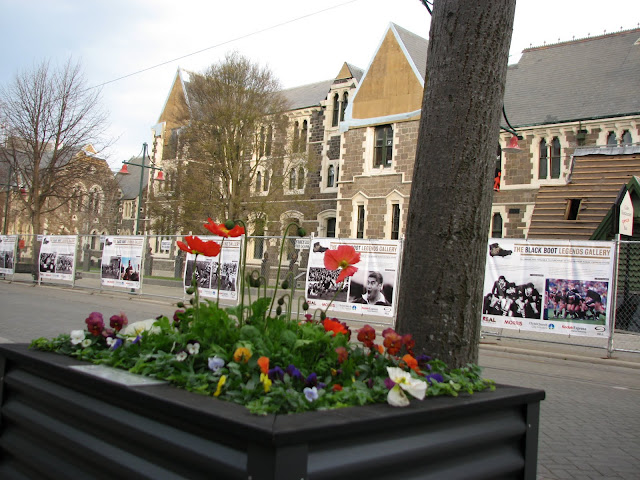 An abiding image I have taken with me after visiting Christchurch, is the care someone / people took  to make sure Spring flowers bloomed in the plots that were still able to be tended. This pride and resilience, this sign of hope; sense that  'life goes on'; is proof to me that Christchurch will rise up from the rubble. 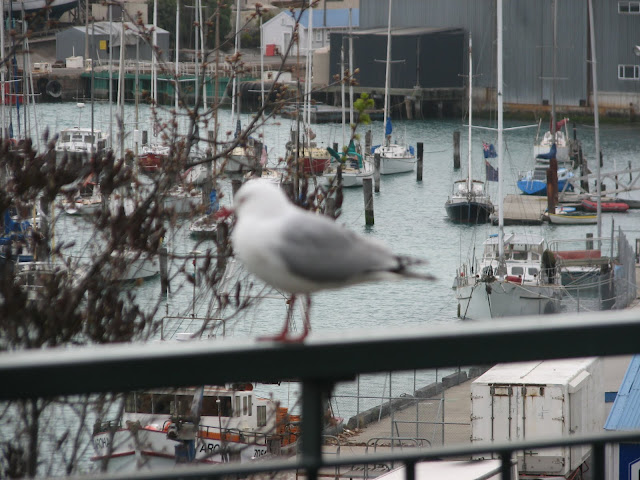 The next day (Sunday) we drove around the Eastern suburbs, noting the slumped land, broken streets, walls, playing fields etc. Evidence of the upheaval caused when the earth juddered and tore Christchurch apart, is everywhere.

As we headed for Lyttleton, Robert's sister texted us - Did you feel that one? Another quake ... we hadn't as we  were driving in the van at the time. 'A 4.5', she texted,  'Not too big but it gets the heart racing'.
In the harbour town of Lyttleton, a bleak scene greeted us. It was sad to see that there really is nothing left there in the way of the shops, boutiques and galleries that used to be there. Homes on the hills appeared hunkered down and staunch in the face of the disaster that twice rocked them on their foundations ... and of course the shakes that continue to do so ... but it is impossible to know how many of the houses are okay.

I didn't take any photos; it became too depressing taking photos of what was full of life and charming, but is now marred and ruined.

However, a cheerful fish'n'chip shop was doing a brisk trade and we ordered a take-away meal of crumbed hoki and chips. We ate it in the van, looking out over the harbour. If you scrunched your eyes and looked only at small parts, it was possible to believe that nothing terrible had happened here.

Ubiquitous and ever-hopeful seagulls lined up for crumbs; we could hear the rain-drop patter of their feet on the van's roof; but weren't about to encourage them, so they were out of luck. 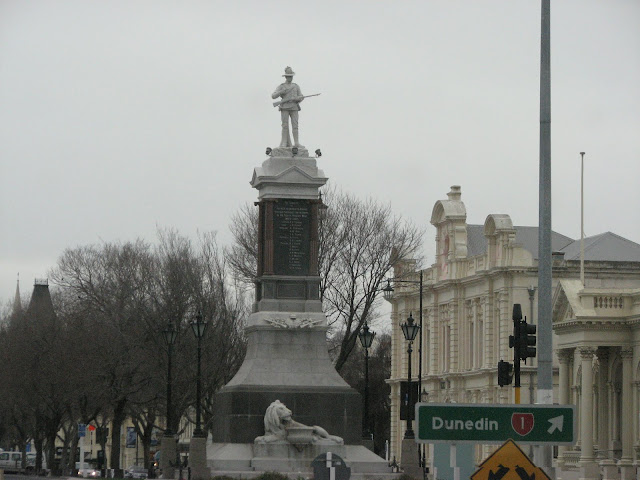 We headed for home, feeling the sobering effects of having seen with our own eyes the state of Christchurch.

There is a sign in Christchurch that says (I don't remember exactly) but words to the effect that 'This City Will Be Re-Built - Brick by Brick'. It's going to take a lot of time, but there is enough hope and resilience evident among the broken-ness, to believe there will one day stand a resplendent re-built Christchurch.

A couple of writers  I know, Catherine and Joanna, who live in Christchurch and have experienced first-hand the earthquakes (which still to this day continue to rattle Canterbury) write wonderfully about what it is like to keep on keeping on after the earthquake. Do pay a visit and read their stories.
- September 12, 2011

It is so important that people such as yourself take the time to see first hand the effects on Christchurch... thanks so muich for sharing :)
Here is an aerial photo that shows the gaps in the CBD now... so hard to comprehend.. every gap used to be filled :( http://i.imgur.com/mWJ37.jpg

Thanks for the link and the feedback Sandy. Much appreciated. Yes I think it should be compulsory for writers and photographers and people of that ilk to 'go see' for themselves.

This is sad. I know I've been reading about it all on Catherine's blog, but still. It makes me sad over and over.

Dana - Yes, it is desponding and depressing. Thanks for dropping by and reading and commenting. :)