'an awkward dance on clay-coloured legs' 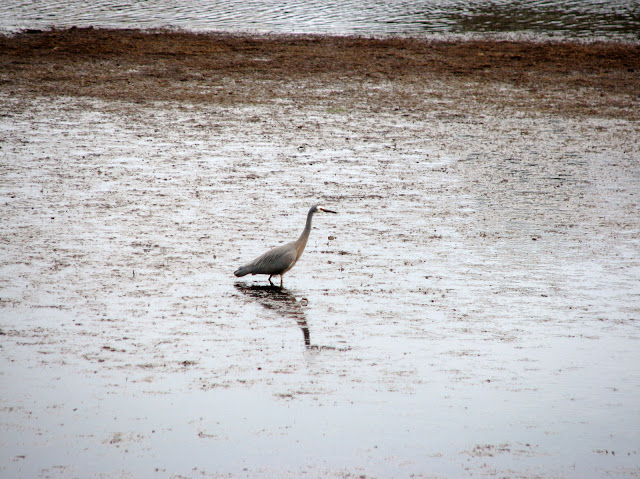 Above is a photo taken of a blue heron we saw yesterday during our walk around the inlet. I have written a poem about the wading birds found around the inlet, the blue heron among them. (I have used a line from that poem for the title of this post. Maybe I will post the poem another day).

We also saw (but I failed to get a photo of) two paradise ducks and as is most often the case when you see paradise ducks, just the two of them, one male and one female.

"There you go," said Robert, "Paradise ducks. They would have to be one of my favourite birds."

Paradise ducks are endemic to New Zealand. They have distinct alternating calls (or honks) as they fly overhead; calls which never fail to remind me of the wide-open spaces of New Zealand's South Island; of mountains, lakes, tarns and tussock.

The call of paradise ducks are a motif from my country childhood, as evident in this poem from my first book of poems, 'Feeding The Dogs'.

the bleat of dusk

Paddocks which seep,
hiss green after rain;
the call of paradise

down by the white bridge

This land that rocks
me never sleeps. Through
the shelter belt of pines
the wind from the north;
it calls

my name, I run
as far as the septic tank
and back. The sound
of yodelling; dusk soaks
my father feeding the dogs.

'twitchy dragonflies with hologram wings.'
Love that - it describes my favourite insects, perfectly.