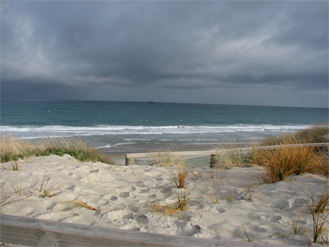 Today where I live, winter blasts outside. Snow thinly covers the hills, but is not thick or persistent enough yet to stay around our place, here at sea-level. I haven't got out of bed. A dogged headache keeps me pinned. I'm a  muted trumpet. A lark without sky.

Looking at the photo above, you would be forgiven for thinking it shows dunes covered in snow, not sand. It captures the July coldness of a beach south of the 45th parallel. (The 45th parallel is an imaginary line drawn around the earth to mark the halfway point between the equator and the south pole).

This winter has been a kind one. Up until now. I look out to see the sky, low, white and furious. Sleet flours our lawn and sporadic hail showers pelt our roof.

Whenever the weather falls quiet, I hear one bird's lone piping. As if it tests to see if it's still alive. Maybe it's a pointless query as to the whereabouts of today's sunshine. It is either brave, or naive.

The showers stop and I can see the hills are white as far as Signal Hill, but not as far down as Waverly. This indicates that the snow is lying down to 200 feet above sea-level. Mount Cargill (kopuka-tau-mohoka) remains its customary deep blue, not snow-covered. It takes a heavy snowfall to cover that hill's forested slopes. (Looking up to see what the name of Mount Cargill is  in Te Reo, I discover that the mountain is made up of three peaks, said to represent the petrified head, body and feet of a princess from an early Otakou tribe). Right now the princess' head sports a halo of lavender light. The transmitter tower stark against the sky like a monstrous, steel pine. (I wonder, is it a little too facetious to imagine the tower as representing the princess' tiara?)

The storm appears to have moved on and my headache has lightened, a little. Robert's sister and husband are checking road conditions for their trip back home to Gore, right when our internet has decided to go on a go-slow. We find out what we can. It appears that the roads are not too bad. They set off in the intrepid manner of people from the south. We wave to them as they leave us, their car sporting a crest of snow. They will go as far as they can, we may see them back to spend the night with us again if the roads prove too treacherous.

Darkness has descended. Our house is now just another light on a hill in a city full of lights on hills. We will have to wait for morning now to see if Dunedin will get its 'Snow Day' - on a Monday too, that's always a bonus. A 'Snow Day' is usually a welcome day off for anyone at the top of steep, snow/ice-bound driveways. To some it'll seem a shame that it's actually fallen in the middle of school holidays.

It's been snowing here too, for the las few hours. I'm rather hoping for a "snow day" myself.

Beautiful writing, Kay! It gave me goose-pimples (and not just through your evocation of cold).

Catherine - It's Monday morning now and by reports coming in, I believe that you have got your Snow Day!

Clare - That is a compliment indeed coming from as wide a reader as yourself; I'm right chuffed! Thank you.

Your photo reminded me of this Van der Velden Painting http://artandmylife.wordpress.com/2010/05/27/acclimatisation/

Lovely writing, Kay. Sunday was a stay-indoors day for me too, although it was very hot (35C) with oppressive humidity rather than bitter cold and blustery. I'm much closer to that other 45th parrallel (at about 39 N, I think).

Great picture and I love your writing. We had about 10 cm snow today so you probably even got more. Stay warm!

Anne Camille - Wow that's hot - such extremes on this little planet of ours.

Marja - We didn't get much snow realy - but I did get to walk in a snow shower - very pretty.

I also love your style Kay. Especially when there is a poem or two. i haven'y read your blog for awhile so wondered how that next poetry book is progressing.