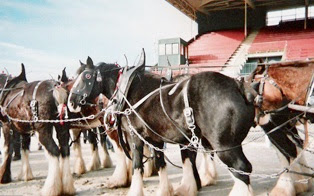 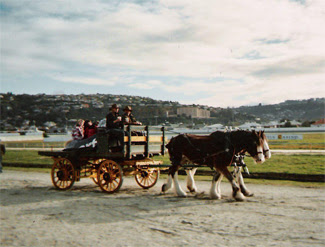 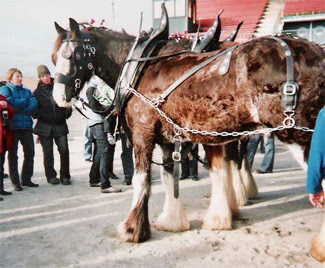 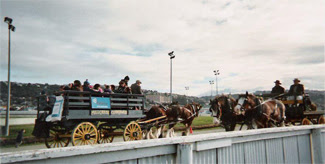 As promised, pictures of the draught horses. Taken on a disposable camera, so the pics are not up to the usual quality that the Canon produces.

Draught horses are the epitome of patience. My father drove draught horses for a time on the farm - this would be back in the 1930's. Then they got a tractor. A Fordson, my cousin* informs me. As a young boy, he stayed on my grandparent's farm for a time and remembers his young 'Uncle Don' fondly. He remembers the horses, as well as wild rides on the wagon towed by the tractor.

As I explained in the post before this one, I missed the actual cavalcade because I discovered I had no chip in the Canon, and as I was on foot it took time to go seeking a shop that sold disposable cameras. Ah well, it was good to catch up with them at the race-course where they were giving rides, or standing patiently to be admired.

*I only met my cousin recently, through him reading my blog.  My father's family was a large one and his older siblings had moved out of home by the time he was born. He liked to tell us he was an uncle before he was born.
It's been a special thing to catch up on long-lost cousins. I met one at a funeral recently and have discovered another one (a second cousin in this case) through Twitter!  The cousins fill me in on what my father was like when they knew him as a young, unmarried man. He sounds like he was a pretty fun uncle, full of teasing and tricks. My favourite story is of him making 'Timber Wolf' noises from inside a hollow log and scaring Jimmy-Joe. "Beware the timber wolves," became a favourite saying.
They adored him. As we all did. At age 48 years, he was taken from us far too soon.
- June 23, 2011

kay, there is a sadness here as i read about your Father. probably my own sadness remembering mine. ♥

how wonderful to meet your cousins. i would love that now, not so much when i was younger. now the stories delight me.

when are you coming to america? :^)

This brought to mind memories of my grandfather who was Horseman on a farm when I was about 4. Enough there to write my own posting, which will eventually appear.
Thanks Kay.