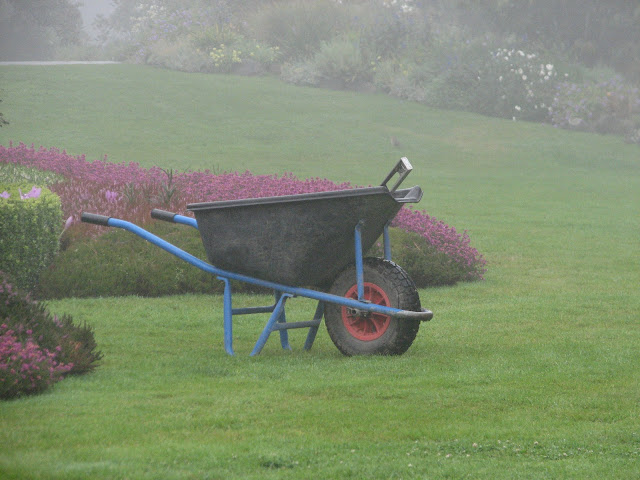 Last weekend my sister flew down from Wellington to catch up on her southern family, and to do some family tree research. Before we headed off into the wider environs of Dunedin City, we visited a local sightseeing spot, Larnach's Castle, built high above Dunedin's harbour and often surrounded by a persistent mist. 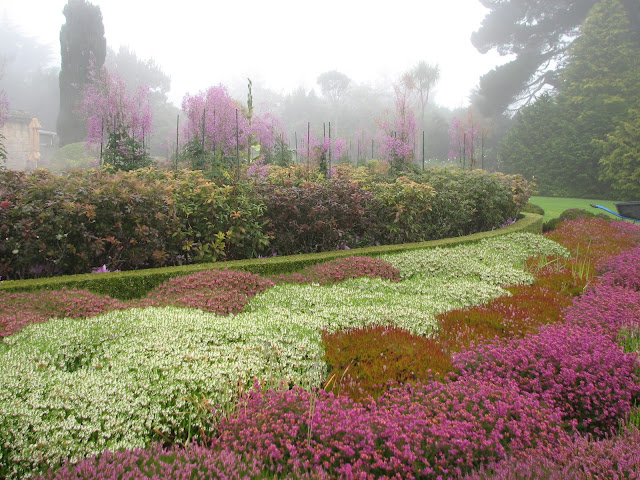 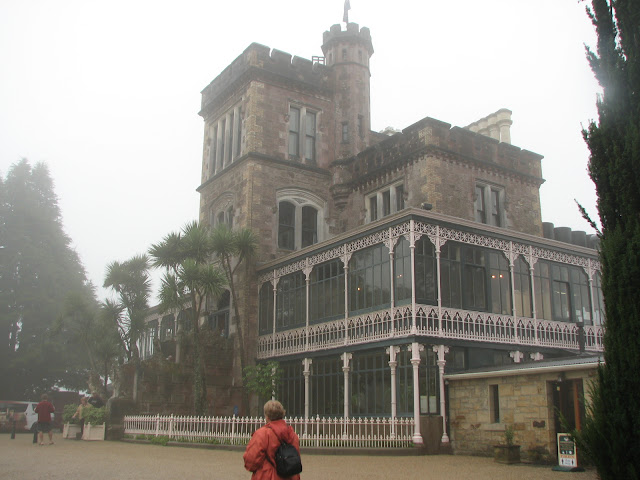 Which only seems fitting for a castle. The castle was built by a William Larnach who we learnt, had an extremely interesting history. And there is meant to be a ghost. But we didn't see it - although one room we went into gave me the creeps. 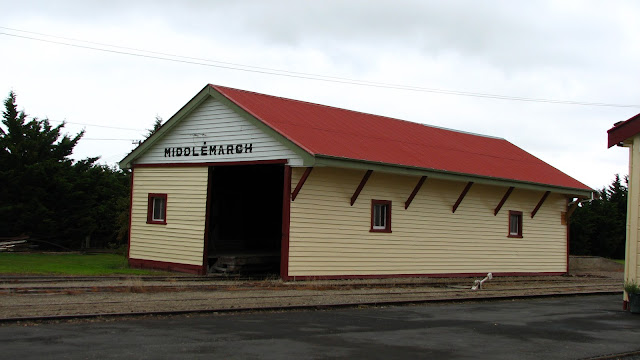 After that we headed into the interior, stopping at Middlemarch, a small town still reached by rail. 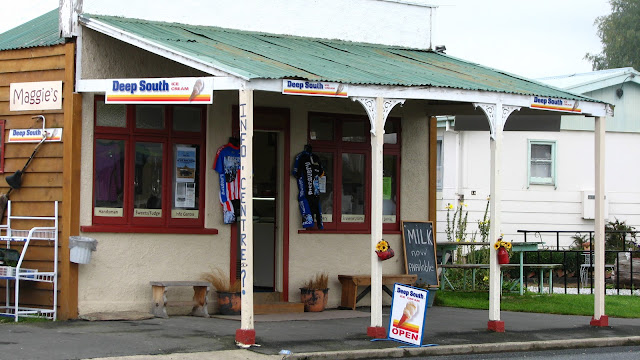 We could hear country and western music pouring out of this little shop, making my sister's partner's description of the country we were in as 'banjo country', rather prophetic. 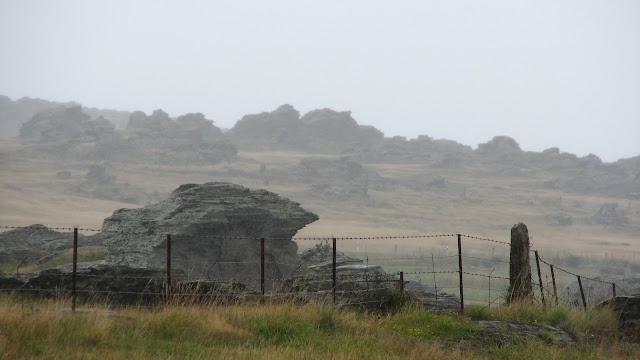 The mist was not going to let us go, and continued to tangle itself about the landscape. As well there was a dogged, autumn drizzle hindering our efforts to explore.
My sister saw a paddock full of mushrooms and made whimpering noises when I didn't stop the car so she could clamber over the barbed wire fence and gather them up. I was too afraid of a gruff farmer shouting, "Oy! What do you think you're doing?" 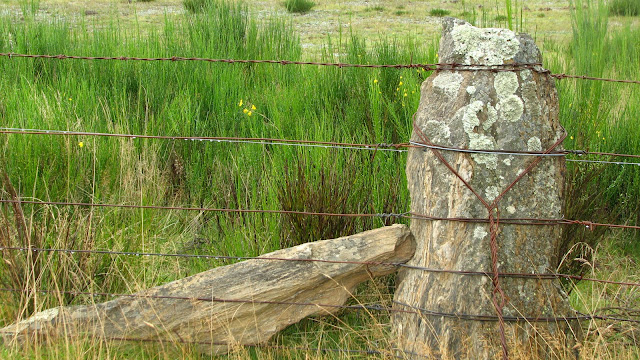 An example of the many rocks to be found around, being put to good use as a fence post.

We decided we wouldn't press on westward, but turn back and approach my brother's place at Beaumont, where we were staying the night, from the east. Having been out of range for phones and internet during our travels, it wasn't until we stopped to have dinner at the town of Lawrence (a town which offers free internet) that we heard about the devastating earthquake and tsunami in Japan. I was very concerned about our son living over there, but Facebook messages assured me he was fine. However, from then on until I returned home again and could Skype him, it was constantly at the back of my mind. 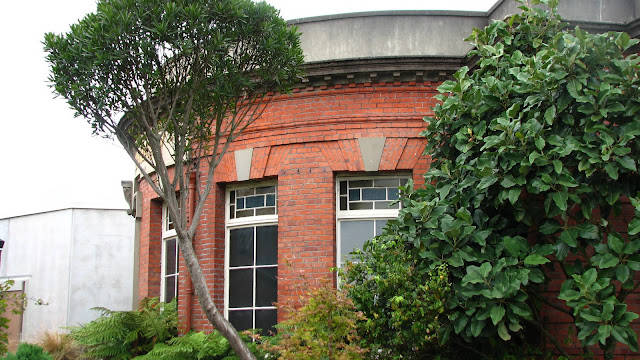 The old Gore library where I spent many happy hours as a teenager .... now the Gore Art Gallery.
My sister and I headed for Gore on Saturday morning, where we spent two days with my aunty, and our mother who was staying with her. This time it was my sister doing all the digging and delving among family history photos and scrapbooks, while I took a bit of a back seat. However, I did pay attention and ask questions in order to add details and colour to what I am writing at the moment.
While in Gore we were delighted one night to find a wine called 'Two Sisters', very apt with us and our mother and aunty making up a double lot of 'two sisters'. Very nice wine it was too - we ended up buying another bottle the next night. 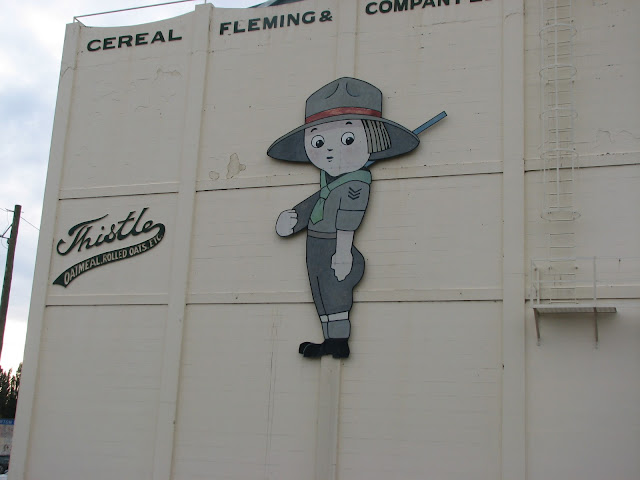 The Creamoata Mill at Gore is now a stock-food factory, the market for creamoata ( a fine rolled oats) having dropped considerably in recent years. However, Sergeant Dan the Creamoata man who encouraged many a young Southlander to eat up all his breakfast porridge, is still there. My sister reminded me how you could smell the oats (roasting?) the minute you biked over the railway lines to got to the swimming pool. One of our other sisters worked there for a time. 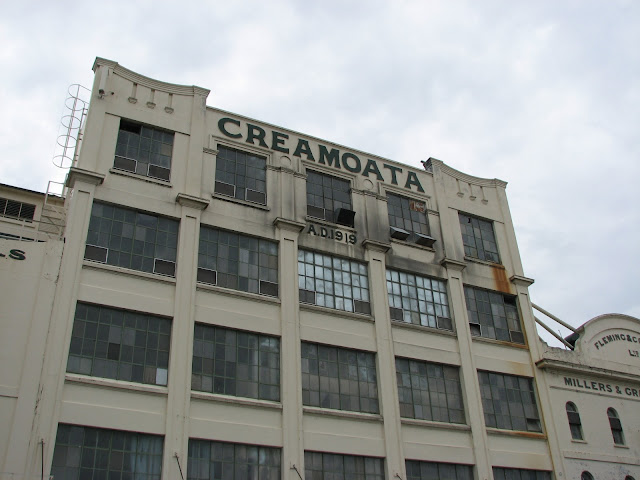 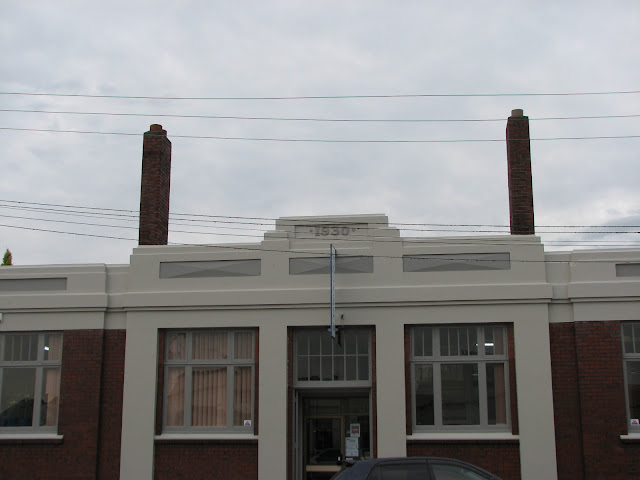 The offices for the local newspaper Mataura Ensign. The building is of Art Deco design, and as you can see by the rather large date pressed above the main door, was built in 1930.
On Monday, I drove my mother and sister from Gore back up to Momona Airport where they caught planes to Palmerston North and Wellington.
Next time, my sister tells me, she is going to bring a big basket with her and is going to make sure the car stops at every paddock she sees with  mushrooms, every wild apple or plum tree, every hawthorn or rosehip bush ... As a dedicated wild food hunter - a Free Food forager - it broke her heart to see so much produce for the grabbing, left to go to waste, as we sailed past. She does have a point.
- March 19, 2011

What a wonderful few weeks you have had. Two things had me puzzled:
Where is that little shop with the music? I've wracked my brain and come up blank.
And the date on the Creamota building. AD 19?? (slipped my mind already) I've never seen the AD on a building before. Could we possibly mistake it for one built BC? Had to have a giggle at that.