I’m writing to ask the literary community in New Zealand to help Christchurch and Canterbury.

As you know, scores of people have died. Landmarks and icons are dust. Our cherished city has been battered and broken.

We will rebuild, but have a long road ahead. We know our situation could be worse, but we need you to help sustain us as we move on.

Please, write some words for Christchurch. Inspire us, encourage us, humour us, delight us, surprise us. Help us keep our sanity, and our perspective.

Send contributions to richard.liddicoat@ccc.govt.nz, and we’ll publish them on our blog at http://cclblog.wordpress.com/ 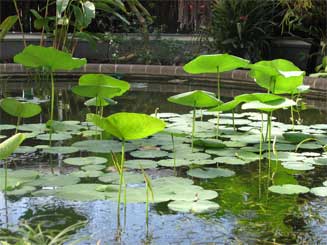 An event that had started 2010 off for me, was reading at a poetry reading for Chinese New Year celebrations at the Chinese Gardens here in Dunedin. As it happened, it was also the day that my youngest granddaughter was born. Both her mother and her sister were also born in the Year of the Tiger; something that had been on my mind that dusty, windy day. One of the other readers there said, "The Year of the Tiger is meant to be a year peppered with sudden surprises." I wondered what was ahead.

As the year progressed, on a personal level, surprises did seem to be happening; one of them was a wonderful, quickly-arranged visit over from Japan by our son. He had with him his nine-month old baby boy for us to meet (and hold and hug). There was also my mother's 80th birthday in September to look forward to.

Then at 4.00 a.m. on September 4th, there was a not-so-good surprise. A massive earthquake hit Christchurch causing a great amount of damage, but miraculously, no loss of life. Luckily, all our family there were okay and their houses largely undamaged.

In the aftermath, we selfishly wondered if our mother's birthday party, planned to be held at our sister's place in Christchurch, would go ahead. Could we expect our 80-year-old mother to be alright there, with all those aftershocks and talk by geologists of the likelihood of another 'big one'? However, my sister and her two daughters were okay, her house was okay, and she said, "Of course it's still at my place." The party went ahead and the arrival of a sister secretly flown over from Perth to surprise our mother, was a success.

While in Christchurch we experienced the frightening after-shocks and saw where broken parts of the city lay, cracked and shattered. I drove with my sister to go and buy supplies for the party. The trip took us hours because of slow traffic on damaged and blocked roads. I thought about what Christchurch meant to me. My husband, Robert, spent three years at university there and after we got married, we lived there for a time. My sister has lived there for nearly forty years now. Early in the twentieth century, three of my father's older sisters (Agnes, Alice and Joy) in turn, moved from their home in Orepuki, Western Southland, to make their homes in Christchurch. They married there, raised families there and died there. 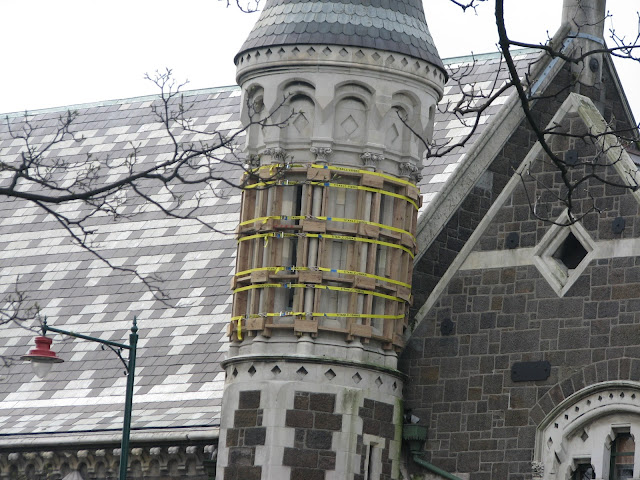 This photo was taken after the  September 4th earthquake; I wonder if the building survived the Feb. 22nd quake?
Later: My friend Catherine - who in her blog writes movingly about her city in the aftermath of the earthquake - has informed me that the Arts Centre (which this building is part of) was mostly destroyed. She has kindly given me this link for info. on this.


Richard Liddicoat, the Christchurch librarian who has invited writers to write in support of Christchurch, happens to be the grandson of one of those sisters; Alice. In September, 2010, my sister and I met him; our second cousin; for the first time. I remember us sitting at a favourite cafe of his. I remember the owner hailing him as we walked in the door. (I wonder if that cafe still exists after the second earthquake?) We sat at an outside table, and as we talked I could see on the banks of the Avon River opposite, cheerful daffodils bobbing normally in a spring breeze. 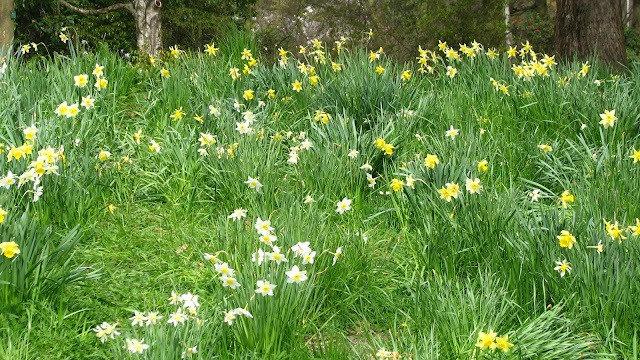 We talked of the earthquake of course, but also of family, dating back to the nineteenth century; of great-grandparents and grandparents, and of family members (a lot of them in Christchurch) who have succeeded from the marriage of Livinia, whose parents emigrated from Derry, Northern Ireland, and William, whose parents were born in Scotland; and going on into the twenty-first century. We talked of the family's Southland-Christchurch link; those who stayed, those who moved on. It gave me a feeling of solidity, even of stability. A sense of things going on from a solid base of family lines. Earthquake or no earthquake.

We discussed how it was going to take a very long time for Christchurch to recover. Christchurch; attractive, sorted, proud, established, the willow-lined Avon lazily and prettily meandering through its heart.

I remember how proud I was to show this city (in many ways modelled by European pioneers on towns and cities ‘back home’) to English friends when they visited a few years ago. We wandered through the Square, popping into the Cathedral where we heard part of a lunch-time service, the Vicar's lingo amusing our English friends. "I love how laid-back kiwis are," our friend said. He loved the 'No worries' saying he had been hearing over and over. We sat drinking coffee in the sun, savouring the busy hum and peaceful atmosphere. As you do, we thought that this was how it was and would always be.

However, on Tuesday, February 22nd at 12.50 mid-day, again the earth shifted under Christchurch; this time with catastrophic effect. This time many lives were lost. This time much of the city was flattened; the face of Christchurch forever changed. Those of us outside of Christchurch watched it unfold on tv, remarking how it was like we were watching something that was happening overseas. It was grim, horrific, shocking. A pall fell over the country, and has yet to lift.

It is hard to try and describe the impact of such an event on those of us safe and sound. We feel a sad helplessness and oddly guilty about being safe and sound. Yet we also feel vitally connected to those in shock and those who mourn. We are all New Zealanders. The National Anthem became pertinent.

We were also reminded that not only are we connected to each other in our own country, but to the planet itself. After the Christchurch earthquake, a Japanese Group here in Dunedin decided they would hold a fair in Dunedin to raise funds for Christchurch. Our son who lives in Kyoto, was amazed and warmed at how many people over in Japan showed their concern for him and his family back in Aotearoa / New Zealand after the February earthquake struck. He wrote about it in his blog. The Japanese know the devastation earthquakes can wreak. Plus, of course, there were the tragic deaths of Japanese students in the CTV building to give brutal emphasis. Footage of the Christchurch quake played continuously on their televisions.


Little did anyone in Japan know at the time that at about 3.00 p.m. Japan time (about 6.00 p.m. NZ time) on March 11th, a devastating earthquake would hit Japan, followed by a deathly tsunami killing tens of thousands.

Again, in his blog our son describes what it was like for him, safely removed south in Kyoto and experiencing the same shocked helplessness those of us outside Christchurch felt.  He talks too about a sadness that has fallen over all of Japan. 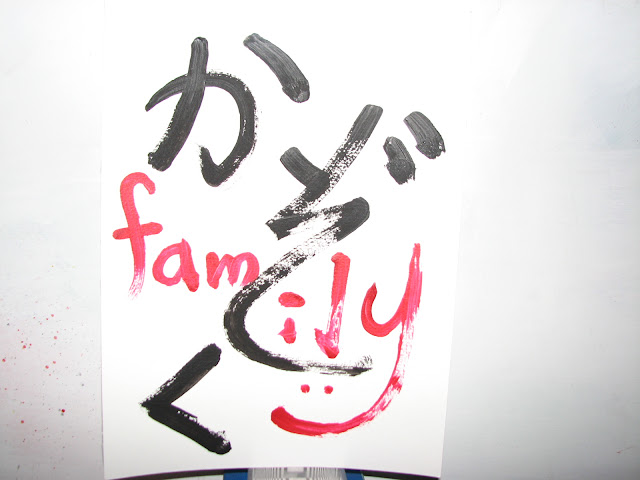 Never imagining that they would be raising money for their own country, the Japanese Earthquake Fundraising Group in Dunedin, added Japan as a recipient for money raised. We went along to their fair on Sunday. We had the grandchildren with us; hoisted on my hip was my one-year old granddaughter, born in the Year of the Tiger. Among other things, we bought a simple water-colour of Japanese kanji for the word, 'Family'.

“One thing earthquakes do is make you think,” I heard someone say.
Just today a work colleague said to me, "Somehow this whole earthquake business puts things into perspective."
My sister said, "I think the planet is trying to tell us something."
My sister-in-law who experienced the earthquake first-hand, said that it has made her re-think her whole way of life. She wants to simplify.

I think back to my great-great-great-grandparents and the upheaval in their lives when they made the long trip over on ships to these shaky isles. And before them, my ancestors on waka from Hawaiki. I wonder what they would say? Something like, “Life goes on,” I’m guessing. Let’s hope it does; in the sun, in the Square, in Christchurch. Again. ‘No worries.’

This piece was submitted to Words For Christchurch

Kay, although we can't get close enough to take photos, I hear that the Arts Centre was badly damaged - the repair bill is estimated to be around $100 million.
More here:
http://www.artscentre.org.nz/images/pdfs/terribleblow.pdf

I appreciated reading what you had to say - about Christchurch, and about us all. Ngā mihi, e hoa.

John - Many thanks. Arigato.