A Change of Moccasin 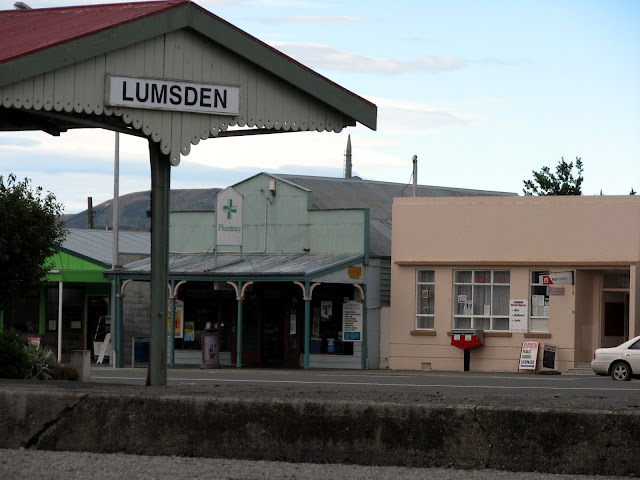 Recently we took a trip south through to Lake Te Anau for a couple of days, travelling over Southland's Waimea Plains and through the townships of Riversdale, Balfour and Lumsden, then hanging a left to travel along the Te Anau Downs. This is red tussock country. Red tussock is a protected native species of tussock. It sure is a sight to see the flowing acres of ruddy tufts rippling in the wind and sun.
At Mossburn, a wind farm can be spotted on top of the hills. South from there, over the distant Takitimu mountains and ranges beyond, is where I was born and which I still consider 'home'. 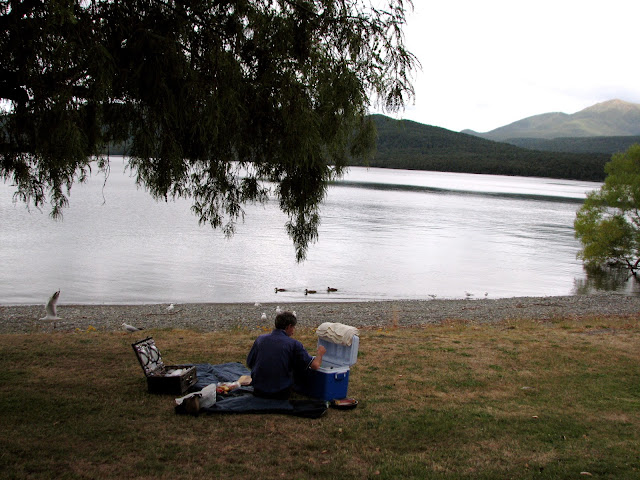 Once we'd arrived in Te Anau, we unpacked the picnic things and enjoyed lunch by the lakeside - despite spots of rain and a bit of mess left by the ducks and Canada geese. (The Canada goose is an imported bird that because of its appetite for young pasture, is proving to be a pest). 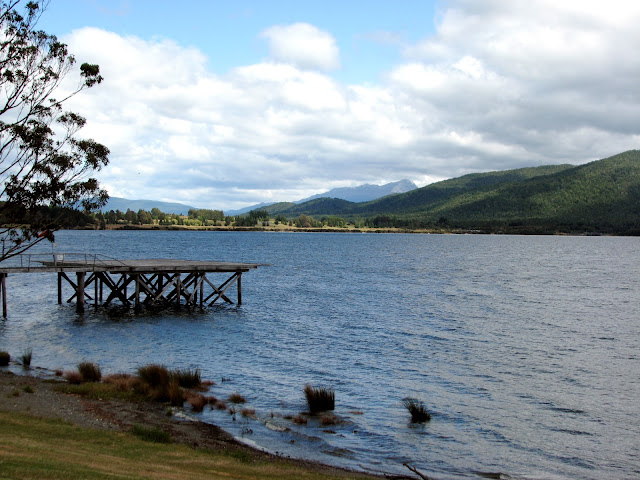 On the other side of the lake, the golf course is bathed in sun. At the time this was taken, Robert was there playing a round of golf. 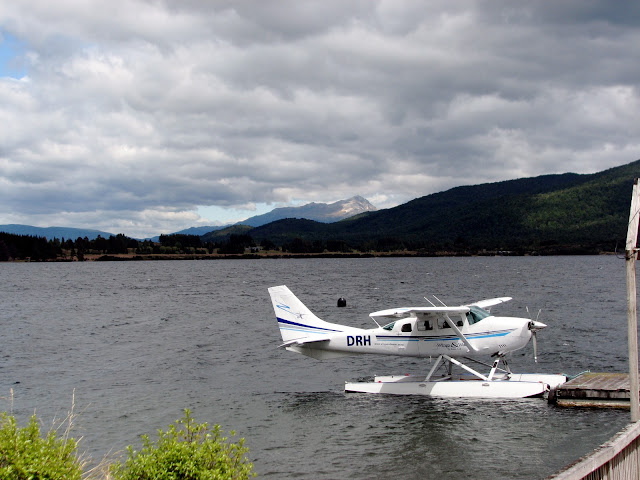 Apparently it's easy for these planes to topple nose first into the drink. They look cute though! 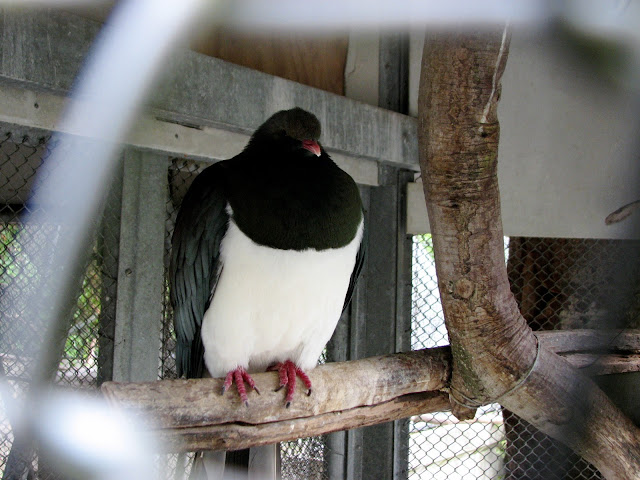 Te Anau has a bird park run by the Department of Conservation (DOC). Part of its purpose is housing injured birds until mended. Above is a New Zealand wood pigeon, called kereru. (In the past it was also called a 'butcher bird' because of its splendid white apron). 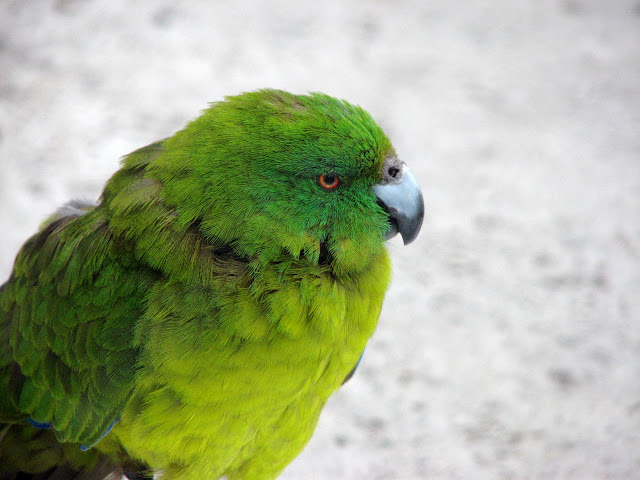 A parrot called kakariki - the Maori word for 'green'. 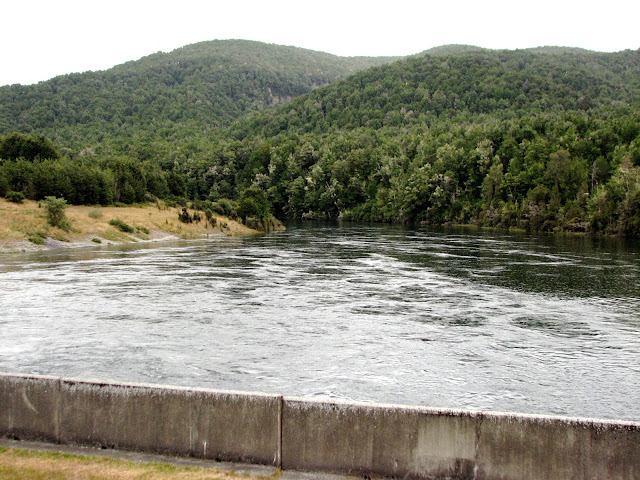 This shows where the Waiau river leaves Lake Te Anau by means of control gates. It is the river - awa - I was born beside; in a hospital I hasten to add; at Tuatapere, just before the river makes it to the sea. The Waiau is a strongly flowing river, and further down from here, just past the small township of Manapouri, it is dammed for hydro-electric power. 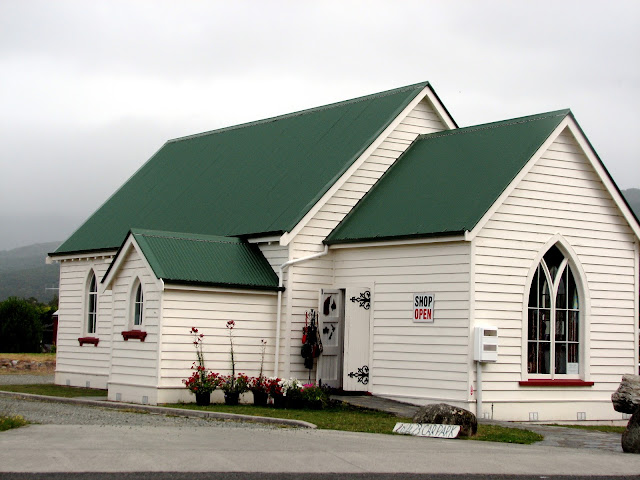 A wooden church at Manapouri that like so many other churches in New Zealand, has been converted (excuse pun!) In this case, it is now a craft shop. 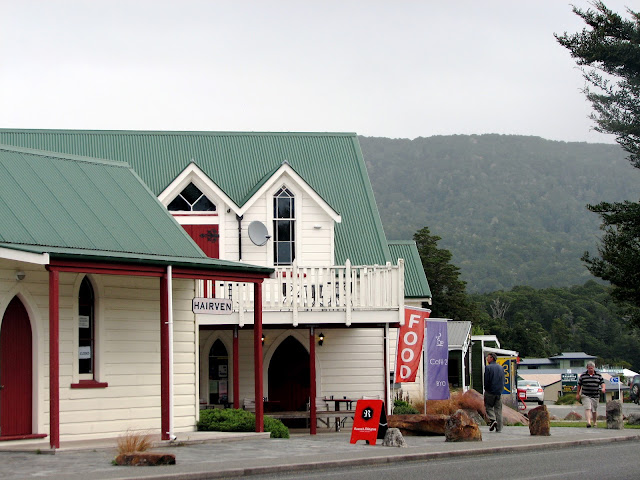 More of the township of Manapouri. The lake here at Manapouri is more hidden, secretive and mysterious than the open and approachable Lake Te Anau. (Well, the fact that Manapouri means 'lake of the sorrowing heart' is a bit of a clue).

In the past few years the Waiau has been struggling with a nasty green, slimy weed called didymo (also dubbed 'rock snot') which threatens its fishing and flow. Another reminder that despite claims to the contrary, we do not actually live in paradise. 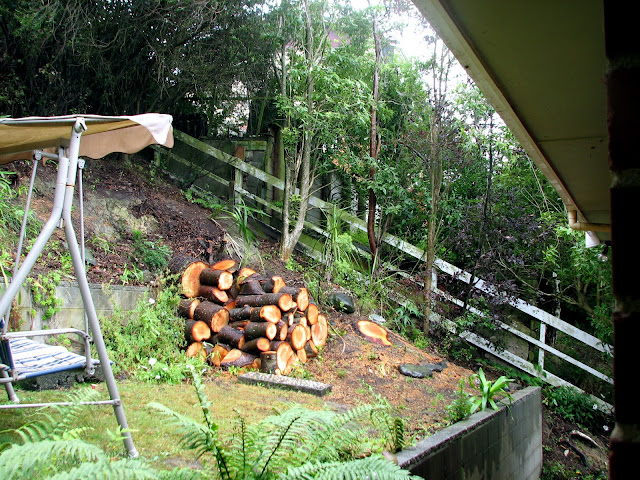 And meanwhile, back in our own particular corner of half-pie-paradise, our backyard has been changed and rearranged after trees have been cut down. While this has let more light and sunshine in, it has also turned the garden upside down. It looks and smells like a sawmill. However, once it is all tidied away (which won't happen overnight) the garden will eventually be restored. A certain amount of upheaval  is probably good for me, but it doesn't mean I have to like it. 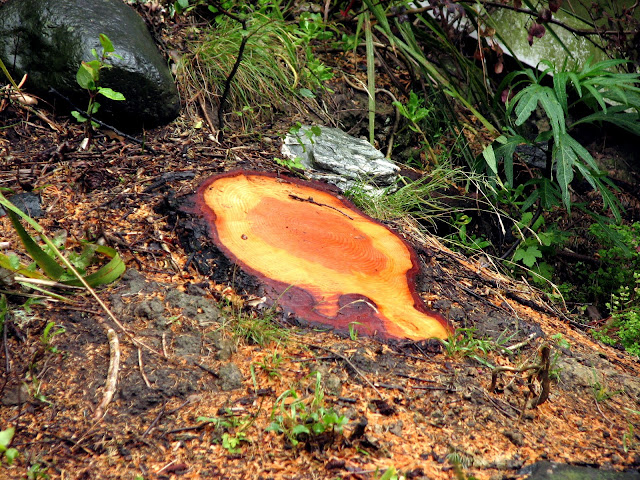 More in the way of upheaval has been an aunt who has been in hospital here in Dunedin having heart surgery. In a week's time I will be going down to Southland, where she lives, to help her in her recovery. There is a well-known proverb that says: 'A change of moccasin brings surprise and strength'. (Actually, I just made that up! But it sounds good. Let's hope it proves true).
- January 27, 2011

You have certainly had a variety of trips these holidays. It makes me look forward to when our kids have flown the coop and Ross and I will have the long summer break to fill up.

Great pictures too. I didn't know about the pigeon's being called butcher birds. Interesting.

Sending up a prayer for your Aunt.

Yes lots of ups and downs this week...Just remember even if in physical form I cant be there I am in spirit...

I hope your aunt has a speedy recovery - and that you enjoy your time in Southland.

We stayed at Te Anau Downs the night before we ventured through the tunnel to Milford Sound. A pleasant spot. Also hired a "twosome bicycle" to tour Te Anau itself.
Once more - thanks for the memories, Kay.

I just found your blog and enjoyed your lovely photographs. You live in a beautiful area. At first when I saw the name of the post “a change of moccasin” I thought you were near a Native American area in the US, or a First Nation tribe in Canada. Then I saw Lake Te Anau I thought you might be in Hawaii, but with the name Lumsden I thought that it sounded English or Scandinavian. Then I saw your picture of the kakariki and knew you were in New Zealand. I’ll come back to your blog to read more of your posts.

You made up that proverb?! It is great. I wish I could have a change of moccasin and see your beautiful country (notice I did not say paradise after you advised us of the rock snot!). The first lake looks so wild and beautiful. What a special thing for you to be born along the Waiau River. I know what it is like to have that kind of connection. I was born in Reno, Nevada, which the Truckee River flows through.

Best wishes to your aunt. Lovely of you to be there to care for her.