On the Main Road to Roxburgh 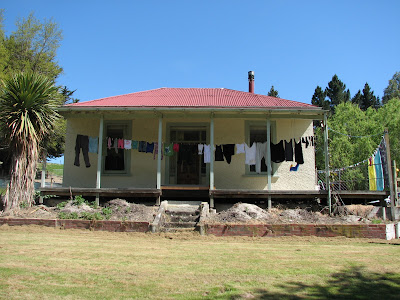 There was a house I remember as a child that looked just like this one. It had that same kind of helpful front porch / verandah with a practical and friendly clothes-line stretched across it. I seem to remember (or favour) the little, wooden bungalow had a green roof and yellow walls.

That house was situated somewhere between Orepuki and Tuatapere on what is now known as the Southern Scenic Route. As kids we would look out for it on our way to or from 'Tap' (Tuatapere's nickname) having made bets beforehand on whether or not there would be washing out on the porch - and whether that washing would be nappies. It was always a fair bet that, as suspected, there would indeed be a line of square, white nappies flapping in the wind. It became something we could depend on. Like Binky McQueen's pink mailbox. Always there. A signpost. Like the duckshooter maimai's along the Waikaia River we would look out for after we shifted from Orepuki to our new location, Otama Valley.

How romantic it sounded, 'Otama Valley', how imaginative and interesting, I thought, to live in a 'Valley'. It was stuff straight out of 'Anne of Green Gables'. In this new place the familiar road became the one between Otama Valley, over the hill to Wendon and then along the river to Riversdale, and whenever we passed the maimais sitting in among the willows like the second little pig's house of sticks, it became an 'in' joke to chant, "My maimai," and wait for the echoed challenge from one or other of six siblings, "No, it's my maimai."

The house in the photo above is in fact located on the real main road to Roxburgh. It is the home of a family I am fond of. Look out for it if you are ever on that road, and give them a wave and a toot. You can even lay bets on whether there will be washing on the line.(But you can take it from me, it's a pretty safe bet in these days of disposables, that there won't be cloth nappies waving in the wind).
- November 16, 2010

Back when I was a t university, I was in a theatre group which did a Christmas revue. One of the pieces was a version of Swan Lake - men in tutus - singing "my maimai is a dry maimai, my my, how dry is my maimai" (to the tune of the Swan Lake theme of course.
I couldn't help remembering that when you mentioned "my maimai"

ah such memories....I just don't have the same ones...the privilege of being the eldest...but beautifully recalled here :-)