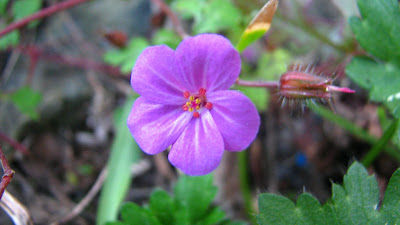 I have been in such a dither and a twither in these last few days I haven't been able to get anywhere near the blog.
The earthquake in Canterbury, our neighbouring province north, certainly hasn't helped.
They say that what is happening around you is reflected in the choices you make and in your ultimate reactions ... and so yes, feeling unsettled.
Of course, not as unsettled as those who've experienced an earthquake of 7.1.
We have family in Christchurch, so we are thinking of them and checking to see if they are okay - all the while getting reports of the after-shocks they are having to field and get through. One family we know have left town as the children were getting too freaked out with the aftershocks and not getting any sleep. There are probably dozens of families who have left to stay somewhere safer until the earth decides to settle.
One of my nieces wrote the planet earth a letter:
Dear Earth,
Settle the fricken down,
Love,
E.
Huge mess and clean-up efforts are going on in what is normally an organised, sorted city going about the usual business of supplying the middle of New Zealand's South Island with its infrastructure intact. One blessing out of it all this is that NO-ONE was killed.
The sharp quake struck at 4.00 a.m. My sister said my niece had arrived home from her Friday night out an hour earlier (which would be typical of a lot of the young ones). So even the late-night Friday revellers were mostly all tucked up safe in bed. This is fortunate, because pictures and footage of the major damage the CBD has copped show that if there had been people wandering about they would've been in danger of being killed by falling chimneys, masonry and brick-walls.
*** 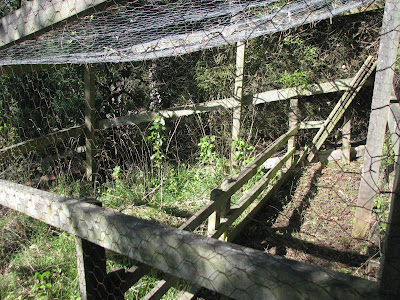 Meanwhile, on the day of the quake in Dunedin, 400 miles away, it was a sunny, early-Spring day,  perfect for the scrabbling about in the garden that I felt drawn towards. Maybe it had something to do with tending the earth ... taking stock ... being grounded ... thankful ...
Above is a photo of an old pen we are going to re-model into a hen-house for a couple of chooks. Already I can visualize them in there clucking and chortling in the way of hens. A large part of my childhood memories involve hens and their care. Just the other day I heard someone say that hens were comforting things to have around. 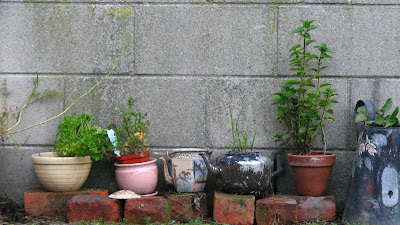 My herb collection, such as it is.

Small kitchen-gardens are something else I want to work on developing and tending. Now that I am not working as much through the week, I use what time I have through the day to write. This means I don't freak in the weekends if I get no time to write, and I feel easier about using weekends to garden and other non-writing activities. 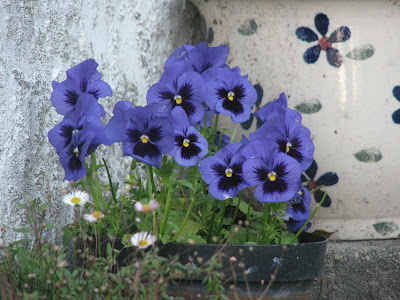 ***
We are heading to Christchurch next week to my sister's place - amazingly unscathed through the quake. She says 'bring your hard hat', referring to the after shocks. It is our mother's 80th birthday and family members are converging from all corners. Life goes on, birthdays roll round, family events happen - even after and around an earthquake. Our Mum has never done things by halves!

***
There was ten years age difference between Mum and Dad (and both were Sept. babies). On Father's Day this year, Dad would have turned ninety. Because we attended a family celebration on Robert's side of the family down in Gore, where Dad is buried, we took the opportunity to pay a visit to his final resting place these last forty-two years. As we pulled up, a gale-force wind rushed at us - Dad no doubt having a joke at our expense (he was always a bit of a jokester). 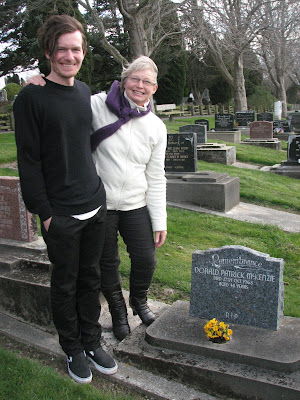 I was particularly pleased to see the yellow polys. I had planted there a year ago had kept flowering. Such stoic, low maintenance flowers, polyanthus. The cheerful little buggers!

As always I enjoy your blog Kay.Loved the letter from your niece to the earth!Sad to realise your dad was so young when he died.Nice flower photos, I am off to Nova Scotia on a photography trip next week.

Hi Kay,
Great blog. I think we have all been unsettled by the earthquake, I can't imagine how hard it is for those that live there.
Your blue pansies are adorable - my favourite flower.
Which son is with you in the photo? I have to say I couldn't tell which. I'm sure you'd not recognise mine either. The years just fly.

Yes, it's hard, but must be even harder for those who still have no running water or flushing toilets. My eldest daughter who lives on her own is really beginning to feel it, especially since she hasn't been able to go to work and they keep pushing the reopening back a day.

My parents both died before my children were born, I think it's sad when children don't get to meet their grandparents.

jwebsterbooks - The son is the middle one (Mike). I love blue pansies too! They are so faithful, flowering all through winter.

Catherine - It's a continuing saga too with all those after shocks - you all must be very tired and stressed.

So sorry to hear about poor old Christchurch - a city I really enjoyed and could relate to when I visited.
I guess NZ is always earthquake territory, but it is always an unpleasant shock when one actuall happens.

it don't half look cold down in dear ole Gore

oh and cant wait to see pictures of chooks in the pen :-)

Avus - Yes it is and we are all very much more aware again of the devastation when a big one hits. Including a reminder us to get an emergency / survival kit together.

Jill - yes it was cold - good bracing weather! And you will be the first to get a photo when we finally get those chooks.