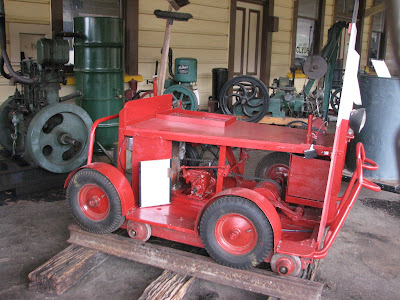 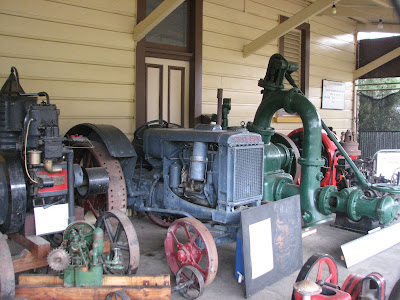 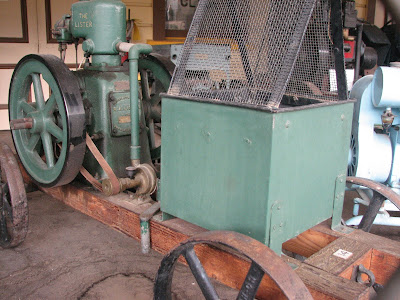 Tractors remind me of my father. These ones are from the Clyde tractor museum.

***
My father was a typical Southland farmer and not given to fancies. However, one day he came home with a story that he and another farm-worker were sure that they had seen something that could only be described as a UFO.
They had been moving cattle into cattle-yards ready for the truck to take the cattle away in the morning, so it was just on dusk. He had experience of 'Southern Lights' (sun showers causing waves of light) and knew that it wasn't that. From what I can remember, he said it was more like a couple of different coloured, hovering lights, a little low to be aircraft.
It intrigued me that my father had seen something unexplainable and weird. Something so interesting and different. Out of the norm. As I was a teenager at the time, I thought that this was an especially admirable achievement for a parent.
Dad never travelled and as it turned out, didn't live for much longer after this incident, so never saw his seven children grow up, or his grandchildren (and now great-grandchildren). However, he had witnessed something that was 'out of this world' before he actually left it, and not many of us are lucky enough to have had that experience.

He saw one once.
Over the cattle-yards
just on dark. A hover
of lights. Wasn’t just him either.
Bruce saw them too.
Between them, tentative awe,
telegraphic sentences,
puzzled shrugs,
a wry acceptance
that no-one would believe them.
But no denying it.
Never in forty-five years
had he left the South Island.
Never been farther north
than 300 miles
to Christchurch,
yet he’d seen this
sky-dance, this hint
at some kind of outer space.
And in just three years
from that night,
he would be dead
and buried under sods
of Gore’s cold clay.

Wow. That is a gorgeous gorgeous poem. Thank you for writing a bit about the incident because I now have a sense of your father and why he might have been chosen as a witness to Wonder.

(gloaming is my favorite word!)

Yes, what a tribute to your father. Thank you, Kay.

Very fine poem, Kay. A tribute to how your father lived and how he thought about what he'd seen, a man not used to, as Lydia wrote, being a witness to Wonder. It may have changed his life, yet no one would have known it, as the pattern of his work wouldn't have changed one whit, I'll wager.