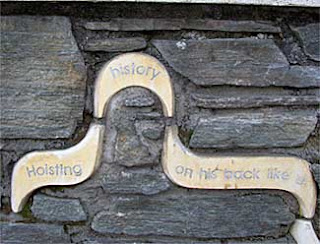 Waipounamu (Wall Poem)
Hoisting history on his back like a sugar-sack,
the swagger strides along greenstone trails.
All night the crib creeks are humming home,
and drowned towns float in their canvas shrouds.
They are just the ghosts of their original selves,
an emotional investment looted by snow-melt for
schemes to answer the Question of Illumination.
To tap this yearning for a golden age,
singing shepherds held wisps of tussock
which curled like lighted Chinese joss-sticks
on the fan-tan tables of sly-grog dens,
frozen in that glacier known as the past.
In the forgotten graveyards, hair grows into grass,
while wind sifts the sweet vernal over and over,
like diggers letting gold dust pour through their fingers.
The Kingston Flyer is chuffing
on the Great Northern Railway to Wakatipu.
John Turnbull Thompson cut the runholders loose
with a panoramic survey and the confidence of a faithhealer
in the middle of Queen Victoria's Royal Century,
when the boom-time harvest of Celtic place-names
seeded Central like a nouveau-Hibernian dialect
from Balclutha to Gimmerburn to Glendhu Bay.
Winter arrives on time in a glitzblitz of powdery snow.
The hoar-frost is a Quarztopolis of ice crystals,
turning weeping willows into frozen chandeliers.
Some strung the coils of Number Eight wire into fences
as trail bikes took to the State Highway with a roar
and the rainshower passed like a plume
over small towns that are hardly seen for hills.
Tarns prickle with bubbles from upland soakage
at the start of Wakatipu on Mounts Humboldt and Forbes,
Pasture stands four-square
to the intersection of Lakes Hawea and Wanaka, from where
Nat Chalmers shot the gorge in a flax raft with his guides
after descending Mount Difficulty in flax sandals,
the first Pakeha to see Lake Wakatipu, for which he paid
Reko and Kaikoura a three-legged pot - Te Kohoa!
Vipers Bugloss is the honeyed heart of the hive
and verandah shadows are dark as delphiniums.
The four-fold path of the farmer leads to hot and cold taps,
the meat-safe's a muslin bag, but the kerosene lamp's gone
the way of Aunt Daisy's and Uncle Scrim's voices on the wireless
or goals from The Boot and Pine-Tree when Rugby took a capital.
Braids of rivers run dreadlock plaits from a taniwha's
stone head, so his blind eyes spurt waterfalls
and his chest is the sucking valley of a mudslide,
when swollen rivers heave against mountain flanks
and sinkholes laden with silt roar Old Man Flood's here!
He'd ride the whaleboat Molyneux from its tributaries
to the sea, or disgorge the Matau of its spears and hooks,
if they hadn't drained the hydro-electricity, way back.
Rivers rule our lives, gurgling, puddling, dripping,
working the lake country round like greenstone,
turning out a tiki of interlocking curves flowing
into Waipounamu, which breathes its green glow,
because the lake environs are a home territory
of purple grape froth trickling a ripe roses scent
and beetroot palate into our salad day memories.
Views of the lake in its many moods: sometimes quiescent,
like a windowpane stippled with rain, behind which
cucumber leafage and swollen twigs revolve, and you
can imagine fridgefuls of rare home-brews,
or spiced-plum brandy, tots doled out to travellers;
sometimes waves snapping fierce enough to whip out
all the tent-pegs in Canvastown, with a wind able
to upturn a wedding marquee's trestle tables tomorrow.
Days of wooden coach wheels bumping out of the Ida Valley
on the Old Dunstan Road in journeys of the pioneers.
Days releasing meteorological balloons into a delicate apricot sky
in this landscape we invent, as it invents us —
from rock flake and springwater, from a skiff of froth
tumbling over a weir into the afterglow of the Aurora.
On a  recent trip to Robert's hometown, Queenstown, we strolled along the lake frontage stopping to look again at David Eggleton's long, long poem sandblasted by the sculptor Stuart Griffiths into an Oamaru-stone ribbon that drapes and loops along the length of the retainer wall. The poem travels a very long way around the jetties, turning the corner and only ends where the stone wall gives way to wooden steps leading down to the lake's edge. 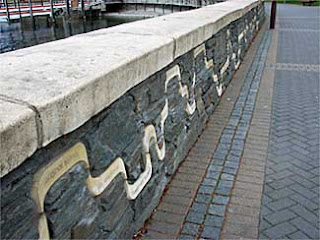 There since 1994, the sculpture is a striking conveyor and companion for David's poem, which reminds and highlights much that has gone into the history of Queenstown and its environs. The poem names and calls up images of the local landscape, pioneers and pilgrims and the roads and tracks they took to establish towns and settlements in a harsh environment.
Flowing like a river of language, it winds us through the legends and hardships, and then aided by the sculpture, with a flick, a roll, a twist (much like the actions of a river) visits the present-day's brashness and commercialism (the gold) which started it all, and which continue to have their effect, before rushing us on again to images of the greater ethos underlying this southern land and its people.
It is a poem stacked with connections - to the land, to ancestry, to folk-lore and to our own mortality. As you read the chiseled words, you receive a buzz of information overload as fresh, vivid language runs along beside you in a waft of words alluding to the flora, fauna, action, and sensations that together add up to the southern experience. (Impossible to take in in just one draught - to process it all fully, necessitates many re-visits; something we are more than happy to do!)
Maybe not many people read all of the long poem as they walk along, but even if your eyes only manage to touch down on a few phrases they are astonishing enough on their own to trigger a sense of familiarity for those from the south, or a way in for those who aren't. If you are willing to participate, the combination of word and sculpture has the ability to stop you in your tracks and allow a fleeting removal from the more obtrusive coffee culture trappings that threaten to cloud the memory of the origins, and indeed the spirit, of this stunningly beautiful place.
The poem is a free offer of a quiet reminder for any who care to take it on board, that rivers rule and just as fast as we invent the landscape, it is inventing us. It is a well-designed touchstone with both wordsmith and sculptor crafting something Queenstown locals are proud to display. You could say, it's poetry being put in its place. Always a good thing. 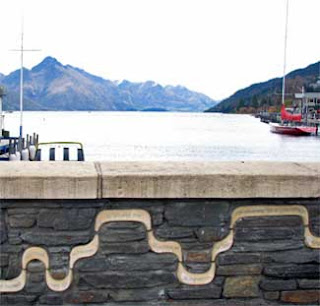 Many thanks to David Eggleton for letting me use his poem.

Thank you for this wonderful, ribboned history, Kay. David's poem is like a font, a fountain, a source, a river - and the movement Stuart Griffiths has carved into stone is remarkable.

My very first encounter with NZ (the moment I was made aware of the existence of this place) was in 1966 when my grandparents returned to SA with a small bag of treasures for me... amongst them, a tiki and a pack of cards with a picture of the Kingston Flyer on them! Who could have imagined I'd end up living here one day, let alone find it so familiar as to consider I might have found my 'intended' birthplace?!

Thanks to you and David for Waipounamu.
L, C x

It's very pretty and yet tough as nails. Quite beautiful. Thanks.

The thing I love about David Eggleton's poetry is the way 'more is more'--going against the current 'received wisdom' and making it work.

I have enjoyed dipping into and out of this poem in visits to Queenstown over a decade--ok slightly more--now: a great tribute to the power of poetry in public places.

This is a fine, fine poem - having read a lot of David Eggleton's poetry of the present and future from the days when he was known as the "Mad Kiwi Ranter", I was fascinated to read what came of the same technique slowed down, given more depth, and applied to the land and the past. This is a side of David Eggleton's poetry I haven't seen before, and one I appreciate greatly - as I do the commentary and the images.

Thanks so much for posting this, Kay!

I love poems that smite you from the first line. This one does. Thanks, Kaye.

It reminds me that when I was in high school we read a poem by an Australian writer, called "The Dead Swagman."

How spectacular! I can only imagine how much it must mean to NZ-landers.

. . . turning weeping willows into frozen chandeliers . . . isn't that so lovely?

Claire - Thanks for the insight into your NZ journey! and we're glad it's now your country (and maybe always has been).

AJ - Thank you. A fitting description.

Tim - You're right,slowing down the poetry is a fine way to appreciate its depths. Thanks.

Ret - It does that for sure! Thanks. That's interesting too about the dead swagman poem.

Lydia - Thanks. The poem is full of striking images isn't it?

Sweet as. And great it's been put up on a wall. Well done Kay - and a deep bow to David.

John B - As always great to have you drop by, and thanks!

Want To Boost Your ClickBank Traffic And Commissions?