Tuesday poem 'can't tell the birds from the blossoms' ... 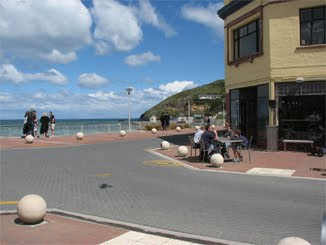 She says from the back seat of the car,
“Excuse me, I’m talking.”
“Sorry hon’,” her mother says.
She remains unimpressed.
“Mum when you say sorry,
you say it in an unremarkable voice.”

At the beach her mother and I watch
the waves tirelessly form, undo,
do up again. She teams up
with another little girl
to build channels in the sand.
Her mother and I talk of this and that.

A woman stops, asks
if we have the correct time.
After she’s gone, we both laugh
at how tempting it would be to say,
“No, sorry, just the incorrect.”
She complains

on the way back to the car
as she hops in bare feet
along rough asphalt. She shivers
with the cold. Her Mum says,
“Sit in the front seat, hon”.
I turn the heater on full blast

and all the way home she tells us a story
she makes up as she goes along
about a terrible monster and a girl
called Georgia. A monster with
‘great big eyebrows, spaghetti fingers
and sloppy green eyes’.

This is a poem about my granddaughter when she was quite a bit younger than she is now.
The title has borrowed a line from the song 'Green Grass' by Tom Waits, released 2004, the year in which this poem is set.
The photo is of the esplanade at St Clair, Dunedin.

I am bad - I keep forgetting to post a link to the other poems on Tuesday Poem. Please go here and be wowed by some amazing poetry.
- July 06, 2010

This is a wonderful portrait, Kay - not only of your granddaughter, but of you and your daughter, too.

A wise man once said to me 'never underestimate the power of the ordinary.' ; )

Love to you,
Claire xx

I love your description of the waves.

Fun poem---but with those depths of familial relationship as well. I love the story told all the way home ... and St Clair Esplanade as well (one of my favourite Dunedin places.)

Claire - Thanks! These are the kind of poems that just seem to fall into your lap sometimes. I am always very grateful when it happens.

Helen - Thanks - St Clair gives me a lot of poems! As does the family.

yes, there's something very NZ about this one, unremarkable days on the beach, shared memories. Very sweet, a poignant reminder for those of us mothers whose children and even grandchildren have grown up.

I love the description of the monster,