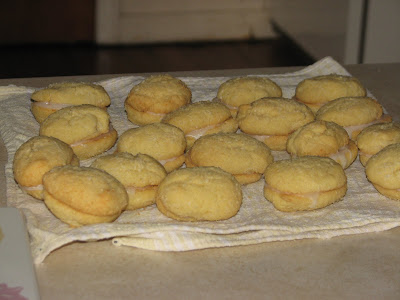 As children, one of our favourite biscuits were called, of all things, 'Slugs'. (I've yet to meet anyone else from another family that has memories of these biscuits).

Beat butter and sugar to a cream, add egg (beaten) and flour mixed with coconut, B. soda & cream of tartar. Take a tbsp of mixture and roll with hands on a board sprinkled with coconut into sm. rolls. place on a greased slide (oven tray) and bake in a slow oven until (just) golden brown. When cooled, join tog. with plain icing.

This recipe is my mother's contribution to an old Orepuki WDFF recipe book. My sister has copied off the whole recipe book so we can enjoy reading the old -fashioned recipes. (I am interested to see that the oven tray, for example, was called a 'slide'. I wonder if that was a Scottish or an English term?

A lot of the sayings and terms we used or heard, long gone now, came from the matriarchal side of my family and were either the Scottish way of saying things, or the English. My father had Irish grandparents, so he'd come out with an Irish term every so often.(For example his way of saying, "greetings" for "hello" was possibly of Irish origin).

My Nana (whose parents were of Scottish and English origin) used to always say she was going to 'do the messages' when she went off with her cane basket to get anything from the shop. And she always called the pictures (movies) 'fil-i-ms.'
To us kids, a sandwich after school was a 'piece' - preferably with golden syrup on it.

When I bake Slugs (a seldom occurrence) I feel I am in some small way, recapturing that long-ago time when rushing home from school meant a raid on the cake tins to find Slugs, or Jumble, or Yo-yos. Or if there was no baking to be had, to make ourselves a 'piece' dripping with golden syrup. (And on particularly cold and wintry days, maybe Mum would have a pot of milky Milo simmering at the back of the coal range).

When we moved to where we went to school and home again on a school bus, if the driver, Mr Fulton from Freshford, saw that the car wasn't in its usual spot in front of the garage (a sign that our mother was away somewhere) he'd shout, "Ooh, look out cake tins, here we come!" And he was right - the minute we got in the door it was time to head for the cake tins. And if Mum was indeed away from the scene, we'd help ourselves to more than one Slug each. Ah, they were such simple times.
- July 28, 2010

You've sparked lots of lovely memories.
My Mum baked too, although we didn't have a coal range, which I think would be so cosy.
My Mum "did the messages" too.
I had a friend who called sandwiches "piecies".
I think I'll go and bake now.

Yoyos, yes. Slugs. No. Lovely post. Isn't it strange what one's brain can do. My brain anyway. I've just noticed your blog is 'born to a red-headed woman'. I've been reading it ..born to be a red-headed woman.
Quite a difference!

Kay,you are so good at evoking images from the past.
Home-made biscuits and friendly bus drivers must have been part of the lifes of lots of us.

jtwebsterbooks - Hi! Thanks for the lovely comments - you're a kindred spirit!

Richard - Thanks - I am sure they were - hope they still are to some degree!

My Mum just asked about this receipe from when she was a child. She was so glad I could find it on your blog!!

My Mum was just asking about biscuits called slugs from when she was a child. She was so glad I could find a receipe!!

My Mum made slugs on Friday and were all gone by Sunday. I grew up with them and so did she. My grown up children and grandchildren still get them from me. Yummy

Elizabeth - I think we need to start up a Slug Appreciation society!
Glad you found the recipe. :)

Debbie - Yes Yummy - a real standard family favourite with us too.

Julie-Anne[nee] McTainsh ---our family originated from CHCH we grew up in the Bay Of Plenty Mother made us 5 kids slugs allthe time .Till today they remain an iconic family favourite--our father from scots ancestory would make us 'Piecies' as a treat some mornings..awhite loaf of bread held so the bottom crust was firmly pressed on the breadboard ,the bread buttered with soft NZ butteranchor ...yummm..then the breadknife cut thin slivers of Band B --for some reason these were absolutely a treat and delicious --Today in the Pacific North West of Washington USA I am making 'Slugs'..My beautiful son ,Julian Dawe age 32,passed in 2013 of a brain tumour -he lived in Auckland with his wife Ami..Ami walked the length of NZ -the TE ARAOA..now she lives and Hikes in Taipei---the Slugs will be lovingly made to your familiar recipe and sent from the USA to TAIWAN --the journey of 'Slugs continues

Frederick - Thank you so much. What a beautiful response to the recipe. I hope that it all went to plan. I loved reading about your memories of childhood. My sympathies to you and your daughter in law with passing of your son. How does one get over such a tragedy? My heart goes out to you and yours. Blessings and thanks again for taking the time to comment, it means a lot. PS I really think Slugs deserves a book - so many people have such amazing memories of this recipe!