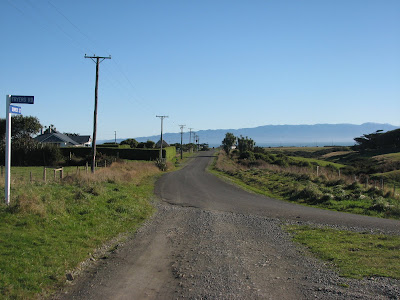 “Our mother’s a witch

with a hooked nose

and she’s going to eat you up,”

my sister tells the postmaster’s son

the clatter of his trike’s metal tray

leaving us the gravel road

with its centre line of mayweed

and so much ours that if we wanted to

we could lie down

in the middle of it

This is a poem from my next collection titled 'born to a red-headed woman'. Each poem has as its title the name of a song that is relevant to the time in which the poem is set - which in the case of this poem, is the early 1960's. The song, 'Hit The Road Jack' was a hit for Ray Charles in 1961 when I was eight years old and in Standard One.

On my recent trip back to Orepuki, I stood at what we knew as McAllister's corner and took a photo that shows the view down towards the ocean and town, thus standing once again on 'our road' almost fifty years on from the time the poem describes.

Though the view is different, I once lived near a road corner like that, not so many miles away: it was in Otatara, not Orepuki, and there were more trees around, but the narrow tarsealed road stretching off into the distance looked much the same. I never thought of laying down on it, though.

I like your sister already. The seven-year old with the fashionable white handbag in the photo in the previous post? The handbag makes me like her tons more. (Have a happy birthday celebration this Friday, Kay.)

I like reading family poems that are (or read as though they fully are) grounded on real events. Here, I get a sense of that, of roots. Such poems cling well to memory, even to that of a stranger's. So thanks for sharing it. Cheers.

I really liked this poem. I liked the economy of words and the humour.

Catherine - Thanks - I was surprised that Blogger's 'Scheduling' option worked - I blogged even when I didn't have access to a computer - felt a little remote tho'.

Tim - It's an a-typical little Southland gravel road isn't it? (And yes, I often used to lie down on it! - it was so quiet - not used by much more than the odd tractor and of course the grader).

S.L. thanks! :) This was actually another sister - I have three! Yes it is all very real - thanks for your kind comments.

Kathleen - Thanks - much appreciated! :)

I've recently discovered you and am most impressed.
"hit the road jack' and "Sometime" were both very evocative so hope that new book is not too far away.
Keep up the good work.

Richard - Thank you - much appreciated.