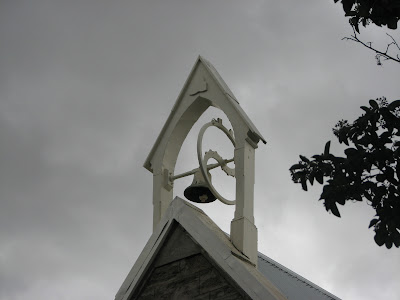 bell
Metal struck,
peals petal-notes,
chimes frost,
hums moss,
keeps time. Reaches
through the fire of praying,
to the ears of birds.
Is a voice, a cry, a call
as simple as rivers
that once ran
over deep, dumb-tongued rocks,
clear to the sea.
Kay McKenzie Cooke
Believe it or not, this poem is a protest poem.
Also, it hasn't finished saying all it wants to say ... is probably still a work in progress.
I have an affinity with bells, maybe because when my father's brother had a daughter called Joy, my father insisted on calling his new niece 'Joybells'. Then when I was born some years later, my Uncle Jack delightedly got his revenge by dubbing me 'Kaybells' - a name which stuck (in the family) for quite some years.
Lately I have been taking photos of church bells - so expect to see them featured here on occasion, even if only as a way of putting the photos to some use.

This poem's a real beauty, Kay - something like a gasp, an indrawn breath, a relief. I especially love the line 'through the fire of praying' which about sums up protest for me, too. Thank you. L, C x

I couldn't quite see it... and then you said it was a protest poem and it all just clinked into place it's a real beauty. Just stunning.

Not only a lovely poem - my own favourite phrase is "deep, dumb-tongued rocks" - but now I know where your Twitter handle comes from!

The Russian word for bell is one of my favourite words: Колокол - Kolokol.

I, too, liked the line "through the fire of praying." It's as though the 'call' is the answer summoned by a hundred fervent petitions.

Cheers, Kay. Thanks for dropping by my site.

Claire - Thanks so much. Yes the protest is almost despondent ... which I'm afraid sums up my best efforts when it comes to protesting.
Maybe it's the tolling of the bell idea ... back to the nursery rhyme theme I'm afraid! Ding-dong-bell ... and that chilling nursery rhyme about the bells of London ...

AJ - You are very kind. I think it needs a bit of work maybe - but then there's far too much tampering going on in this world as it is! so perhaps I better let it say what it's got to say in the way that it wants to ... :)

Tim - I love that Russian word! Thanks for that and for your lovely comments.

S.L. Corsua - Yes ... I see what you are saying and it kind of echoes what I was thinking aloud in my earlier response to Calire's comment about the tolling of the bell.