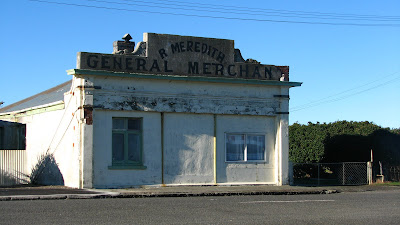 A recent trip to my birth-place in Southland has resulted in thoughts about place. This poem is from my first book, 'Feeding the Dogs,' and was written after another such pilgrimage 'back home' about ten years ago.
Time, distance (same thing actually) homesickness, a sense of place, identity, ancestry - it's all here as I've tried to convey the effects of the passage of time on both the concrete and the physical. As well, I wanted to allude to the more intangible aspects of taking such a journey back in time, while still vitally connected to a present that by its very nature, relentlessly forges ahead into the future, minute by minute, nano second by nano second ....
some time
A funeral's brought us back
to Orepuki, walking past
what used to be the Garage
now just an empty walk-through
that nobody bothers to walk through
any more,
weeds scrabble walls,
paint licked off by rain.
Grease-smudged, overalled, old Mr
and young Mr Mac. filled cars with Boron.
My brothers say: There
was where the old picture theatre
was. Flip-back seats that squeaked,
a funnel of light; Ma and Pa Kettle.
Looking down empty streets
at time-scrubbed buildings,
what was here is still
in the air; memory
forms the shapes.
In the pub it's just the same
as any country pub,
the only character found
in whoever is there to argue the point.
The Turnbulls had a half-timbered van.
Once, on the way back with them
from the Teretaunga Races,
we bumped into another car.
I remember the feeling of all not as it should be
... like this feeling now
holding a dripping, ice-cold,
chiselled mug of beer,
an uncle just buried - the last
to die of a family of twelve.
There's talk of $100 burial plots
(I think I should be in
- that's a bargain.)
Then it's time to head back home - 300 ks.
But this is home. This place,
where every stone counts
and under our feet,
safe ground.
Terry drives us away and over
what used to be the railway station
now spare ground with a ditch right round.
He's trying to find us a way out.
We may be here
some time.
For more Tuesday Poems go here.
- June 06, 2010

Lovely memories here.
(My first reaction was "What! Tuesday poem already? I've enjoyed having a three day weekend, not really ready to go back to work tomorrow).

Love this, Kay - esp. the line ' what was here is still in the air. . .' L, C x
(PS. Lovely to see you and Brittany sharing conversation and hot drinks at Nova yesterday!)

What a bittersweet connection; to be there, to feel the changes and ebb and flow of time, history, shadow and memory.

This was like walking through dreams of my own past, thank you.

I enjoyed re-reading this one: I loved your first book (and your second!). I think I may have said this before... :)

The previous post had a great line in it about feeling like a giant in your 'homeland'. I like that idea very much - it's how I used to feel re-visiting my old primary school. Weird.

Kay,
There's an old saying: "you can take the boy out of the country, but you can't take the country out of the boy."
Home will forever be home and the memories will always flood the conciousness when we return no matter what.
But you said it so much better than I.
rel

nice.
love the photo too. i have merediths in my family tree, though i've no idea if they are related to the ones from your photo

Thanks to all of you for your lovely comments. I am replete.

kay,so you should be replete after previous comments.This poem is beautiful and very real to anyone returning to a past home which has lost part of it's former glory.