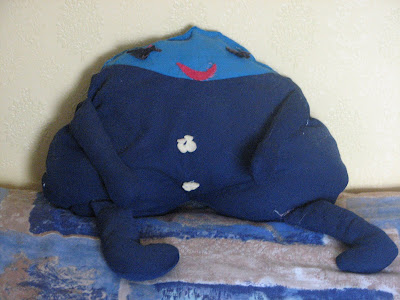 When I went to leave my mother's place on Thursday this week, I couldn't find it in my heart to leave this fellow behind ...

In early 1974 when I was twenty I hand-sewed Gonk for my sister's eleventh birthday. He was made out of crimpline, a popular (stifling) material in the 60's and 70's. A very badly-stitched effort, but with personality. My sister loved him.

(From Wikipedia). 'Perhaps the most famous gonk in the UK (and NZ) was Humpty from the children's TV series Play School. Gonks were also immortalized in the early 1980s in the TV comedy show The Young Ones, where Neil gets worried about his exam performance:

Gonk moved from Dunedin to Gore, then in 1976 from Gore to Palmerston North. After thirty-four years he is on the move again, unceremoniously squashed into a suitcase to travel with me back to Dunedin.

you stole him...just smuggled him out of his warm house to make him head south to a cold cold winter....my poor gonk....you better give him lots of cuddles like I used to!!

I remember gonks - thanks for the reminder - I never had one, though. (It didn't occur to me that Playschool's Humpty was a gonk - not quite the same in my opinion. I believe the Playschool toys are in the Otago Early Settler's museum!)

Such a familiar name ... I just can't put a face to the one I'm sure lived in our house. Brown, I think. I'll have to ask my sister...

I love that Humpty is a gonk; all those years of play school and never knowing (it's true Catherine, Wiki says so ;-). Such a cool word too. Gonk, gonk, gonk...hmmm craft revival anyone?

Thanks for sharing this!