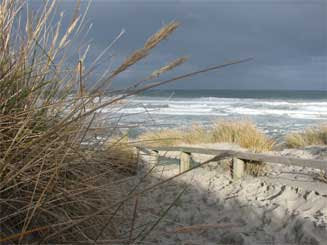 As I ponder about what to post for this week's Tuesday Poem, heavy rain falls upon New Zealand. Where I live, so far there is no accompanying wind, so it is falling softly and secretly, calmly unwrapping its contents. No doubt there are some who will be awake throughout the night, keeping an eye on flood waters. I am fond of rain and its ability (in small doses) to clean and heal.
In a poem by Dylan Thomas titled 'We Lying By Seasand,' he describes sand taking over rock;
'... wish for the wind to blow away
The strata of the shore and drown red rock ...'
And in another part of the poem:
'The lunar silences, the silent tide
Lapping the still canals, the dry tide-master
Ribbed between desert and water storm,
Should cure our ills of the water
With one-coloured calm ... '
Thomas died in November, 1953 (the year I was born) before the modern swoop of 'global warming' as we know it, and before our greed for the earth's resources caused the devastation we see in such disasters as the BP oil slick in the Mexican Gulf.
Thomas is said to have said that the meaning of a poem was secondary to him as he was more interested in the musicality of a poem. He stated that the poems that most influenced him were the Mother Goose Nursery Rhymes of his childhood.
My favourite Thomas poem is 'The Force That Through the Green Fuse Drives the Flower'. I am fully confident that Nursey Rhymes are totally free of copyright, but I'm not so confident that the poems of Dylan Thomas are as free. I decided to play it safe for my 'Tuesday Poem' and post a nursery rhyme - one that has been going round and round in my head lately.
'I do not like thee Dr Fell
The reason why I cannot tell,
But this I know and know full well,
I do not like thee Dr Fell'.
This rhyme was written by Tom Brown in 1680 and describes a real Dr Fell, one of Tom Brown's school masters, but it wasn't included in Mother Goose Collections until 1926 when it appeared in 'Less Familiar Nursery Rhymes' by Robert Graves. It is a little rhyme that can be applied to many things - but perhaps currently, to the human greed that threatens to topple the fine balance of life on this planet, over into the diabolicle. 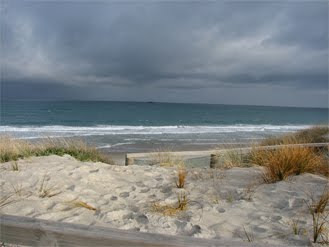 A thoughtful and thought-provoking post, Kay. What I hear you saying is that the heart of our world resides/finds expression as much in a poem by Dylan Thomas as in a nursery rhyme. Nursery rhymes can (and do) address profound truths, and have a timeless quality about them, which means they live through generations, accumulating history and always somehow relevant. Thanks for the new slant on the Dr. Fell poem. Ah, the Gulf.

I can't help looking at the word 'gulf' and pondering it in the context of what's happening there - is this a gulf we cannot cross? In today's New York Times there is an article about continued drilling... multiple new rig sites, etc, etc... the thought - the reality of this mining blithely continuing- leaves me feeling sick and disheartened.

Like you, I am fond of rain (in small doses) and its ability to clean and heal... in the way tears do.

I was reading on New Scientist just recently that the layers of silt that Hurricane Katrina deposited on New Orleans cleansed the soil, or at least covered up the polluted soils, so that now soil lead levels have dropped considerably, and the blood lead levels of children who live there have dropped too. Maybe nature knows best after all.
The oil spill on the other hand is terrifying, given that it is still continuing.
As for copyright, I just checked. Copyright in the UK is governed according to Wikipedia by the 1989 copyright act in which a literary work is copyright for seventy years after the death of the author. Sigh. It used to be fifty years, and I understand that the extension to seventy years came about because of pressure from the US to conform to their laws, which came about because of pressure from the Disney Corporation when their copyrights on Mickey Mouse were about to expire - all to do with big business and nothing to do with protecting regular writers and artists at all.

Kay,
You never fail to get my mind moving! How I avoid returning here daily is beyond me. Somewhat akin to banishing one's muse I guess. Work has been my reprieve from life of late and so trying to find a musicality in my words becomes elusive at best.
Wars, oil spills, terrorism, ad infinatum show me over and over that "man" does what nature (God) programed him to do... Just like hurricanes, volcano eruptions or earthquakes: it's why we're here; to change things.
Not making excuses for man's greed etc. just observing.
rel

Thanks so much for your comment on my Tuesday poem - which led me to read your blog and discovered something to suggest - Dylan Thomas's work is still in copyright but you can apply to his agent for permission to use a specific poem on a blog: brucehunter@davidhigham.co.uk - I think they'll just ask for a permissions credit.

Love your blog! So happy to have found it.
Belinda

what a generous posting, kay. it is early morning here in New England, and you have filled my head with nursery rhymes and gratitude as i look out at the fog lifting off the cove.

Claire - Thanks Claire - I kind of just took off in this posting and let the words and thoughts lead me to wherever they wanted ... a strange sort of experience, but fun! I am a fan of both Thomas and Nursery Rhymes - maybe they fit together in a weird kinda way.
I hope you can keep enjoying the earth worms! :)

Catherine - That is so helpful, thank you.
I love the bit about the silt in New Orleans - I think nature has had to learn to compensate; accommodate; for our bunglings too ...

Rel -Thanks for dropping by! I take your point. It's all a little overwhelming until we stop and take a breather maybe and look at a sunset or the stars ... a bit hard for us here in NZ at the moment, as it's raining rather hard - but that won't last.(I am an optimist at heart!)

lillyanne - Thanks so much! I will remember that as I would like to post some of his work at some point.

Susan - That's lovely! Thank you - and for the description of your view of a misty cove. That's special.

I'm going to break the habit of a lifetime - well, the last five minutes, at least - and combine poetry and politics to say, firstly, that I enjoyed this meta-poetic post very much, and secondly, that the threat from offshore oil drilling, so vividly and inexorably demonstrated in the Gulf of Mexico, extends much closer to home - see

The Great South Basin, in deep water off the Otago and Southland coast, is one of the areas being eyed up for exploration and exploitation. And what could possibly go wrong?

Tim - Thanks for link. I heard the mews and shuddered because I know full well where their beady eyes are fixed. Fills me with a deep dread that I know hails from the ancestral part of my being.
I am planning a trip down to Te Waewae Bay next week ... I think I should do this as often as poss. while I can still see the Princess Range unobstructed by the sight of oil rigs. :(

Tim- 'mews' Ha! Of course I meant 'news' but you know what? 'mews' could almost be appropriate - let's hope the mews remain kitten-like for as long as possible, and are stopped before they become roars.

A Cuban In London said...

As a person who loves the sound of rain at night (especially when I'm tucked in with my wife in bed) I lapped up your post. Many thanks. That Dylan was just fab.

Kay, I looked into the copyright issue too, and it's 70 years after the poet's death before the poem is out of copyright. I like this poem and I love the musicality of 'Under Milkwood' and 'Do Not Go Gently Into That Good Night' which do have meaning as well as being a treat for the ear. When I studied his poetry some years ago, I did end up getting exasperated with him.

Nursery rhymes, like fairy tales, are such an important part of culture.

As a Brit, I squirm every time the oil spill in the Mexican gulf is mentioned, which is pretty much every day.

Thanks for this post. It's a really interesting way to respond to the Tuesday poems...with the different snipped and the photographs, the explanations. I'd like to sit mysef in the Dr. Fell nursery rhyme. Why do I have to know why I do not like him!
thanks.