The Sound of the Sea

Little did Robert and I know that on a certain day in autumn in the late seventies (as it turns out, the very day we left the Isle of Mull, Scotland, where we had been working at the Tobermory Hotel) a baby girl was born to a young, Japanese couple in Osaka, who was going to grow up and become our future son's wife and the mother of our grandchildren.
Time, circumstances , juxtapositions, patterns, chances, the planned, the unplanned; the whole, tingling, awe-ful and beautiful symmetry of life; fills me with a wonder I can barely suppress. It makes me want to do something surprising - like burst into flower. 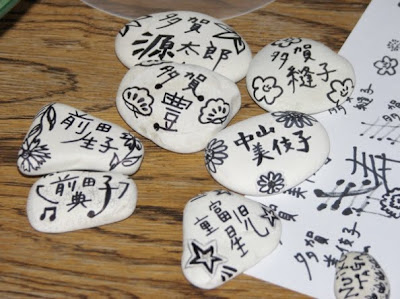 And so ... cut .... zoom .... 2009, and our son and his Japanese wife's New Zealand wedding ceremony. They collected stones from Kaikoura beach to use as place-names for the guests at the reception. A friend then decorated the stones and everyone was able to take their specially named stone home with them as a memento.
Mixing cultures can be tricky but the results when it is successful, as in the case of our son's marriage, is a thing of beauty.
I wrote a poem for the marriage ceremony and read it out on the day, in a shower of rain (making the third stanza especially poignant, or ironic, depending upon which way you want to look at it) and accompanied by the loud wails of their baby daughter (whose second name is 'Magnolia' - hence the reference to that flower in the poem).

The Sound of the Sea

It is all the ocean

that find each other

It is the love between

The merging of worlds

It is God opening

It is the blessings

that fall. It is time

It is in the territory

of miracles. It is all of us

here for you. And it is sweet.

As the sound of the sea.

McDinzie - Amazing to think it was two and a half years ago now ...

What an awesome gift to give, as well as the thought behind it...I especially like the last stanza!

You have an uncanny knack for making the romantic in me swoon right into bliss.
I love that about you. :D

Catching up with your site is like opening perfect presents on a good Christmas day :-)
xx

Oh the pebbles are gorgeous, lovely poem too. xx