Another Autumn - Winter Poetry Reading Session starts off in Dunedin - beginning this Wednesday night (14th) at 8.00 pm. at the Circadian Rhythm, St Andrew Street. Each fortnight there will be an open mic. and either a guest reader or a theme.
So far the schedule is as follows (with June & July yet to be finalised) :

I'm not really keeping up in excellent fashion with the NaPoWriMo challenge - nevertheless, I am writing far more poetry than I would've been otherwise just from sheer terror at the sound of panting poets chasing and passing me! Good for the soul ... I think. Either that, or it's forcing me to write for the sake of writing, whether that's good or bad, time will tell.


This is another Mike Cooke drawing I love - I have it in my office and often glance up at it and smile. Today as my fingers hovered over the keys in preparation to write another April poem - for NaPoWriMo - (inter-)National Poem Writing Month - my eyes found the 'stay' drawing again. That's all I needed for inspiration and I was off. (A shame that in copying the drawing, the green where the figures stand has not come out). 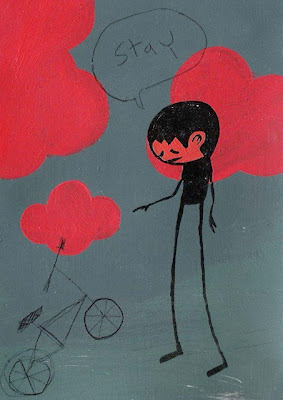 He loves his bike

He wears only black,

is very thin and mostly

so tends not to block

anyone's view. He treats his bike

when he leaves it

for any length of time.

when he finds himself

on the edge of some random planet

where bikes are forbidden,

of some cosmic drama.

He points a twiggy finger in emphasis.

at that obstinate angle,

any moment to roll over

of such a flat

that he will return

with a heart trying not to break,

that the bike is not out free-wheeling

I like that poem a lot - if we ever did a second volume of "Voyagers", I would definitely be interested in including it!

My version of telling a bike to "Stay" is saying "bad computer!" to my computer when it misbehaves. It's surprisingly effective.

What a lovely inventive poem. (The same goes for the drawing)

I'm with Catherine on this – both drawing and poem are lovely. Your poem manages to get the same feeling of capture with simple lines, well placed.

And I can so remember the feelings of “sheer terror at the sound of panting poets chasing and passing me …” That's NaPoWriMo!

Tim - Wow - thanks! (I hope there is another anthology - not just for that reason but because it was such a fine idea and result.)

Jopre - Thanks for your lovely comments!

i really love this one. because not only do i love to come here and read your poetry, i also love mike's art