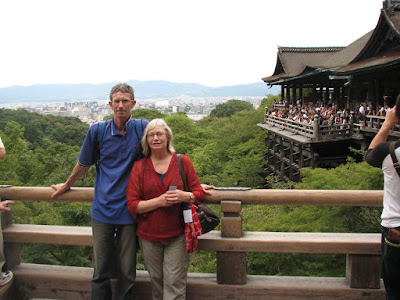 Our son fell in love with Japan after visiting there as a fifteen-year old on a school trip. When he returned home he said, "I 'm going back." And he did, about 6 years later. "Don't worry Mum", he said at the airport, "It's only for a year." That was 6 or 7 years ago. Three years ago he fell in love with a young Japanese woman who has since become his wife. They now have a daughter and a son. We visited them in October last year and also fell in love with Japan. It was all meant to be - Japan has now become part of our family.
I remember when our son was a toddler and how with his blond curls he was often a popular subject for Japanese tourist's cameras. How they loved to photograph him! Maybe there is something in that of 'coming events casting their shadow' ...
homesick for Japan
As we approach by air
the still islands that make up
Japan, our own small stories
beat an urgent song
from the yearning to see family.
Surrounded by a language
we cannot translate,
we drink airport-lounge coffee
and something that we never expected
we'd have to make room for
already begins to re-configure
the strange into the familiar,
grafting it to our blood
with a careful husbandry, aided
by the burying of the placentas
of our two grandchildren
in ancient, family-land in Okayama,
under magnolia
and olive tree saplings,
so that our DNA becomes a part
of a foreign country's soil.
So much so that after staying there
long enough to befriend and absorb,
we leave behind
what has now also become
partly home, and knowing
that we've only just begun
to understand
what it means to marry
to ourselves such mystery.
Kay McKenzie Cooke
- April 24, 2010

Thanks for this poem, Kaye; it's beautiful. I've forwarded this page to family and friends.

I've got family in Okayama too. Did you go to the famous garden?

Here's another connection to add to your list: I used "Bluecliff" in my public speaking class in Tokyo last year.

It is the 'here and there' of it that I find painful, Kaye, though in these days of faster travel, of internet, emails and skyp, the pain is not so acute, but I dread the thought that my children might do as my parents did before I was born and leave their country of origin to live the rest of their lives elsewhere, but I understand and applaud their efforts to travel further afield as you do your son and I know it would broaden all our horizons. Still it is a bitter sweet development.

Your son looks contented and Japan is clearly a beautiful place for him to live in with his new young family. Your poem suggests that Japan becomes a sort of home for you, too.

Everything about this post is so beautiful. I am so happy for your son.